One of my favorite things about Mexico City is how diverse it is. There are so many different neighborhoods and each carries with it its own personality and colorful characteristics. Below are, in my opinion, the best neighborhoods in Mexico City and why you should give them a visit on your next trip to DF.

The best neighborhoods in Mexico City are of course subjective. Whether you prefer great food, beautiful architecture, history, museums, or a combination of all of these things, you’ll likely find a neighborhood you prefer more than another during your time in CDMX.

The Best Neighborhoods in Mexico City 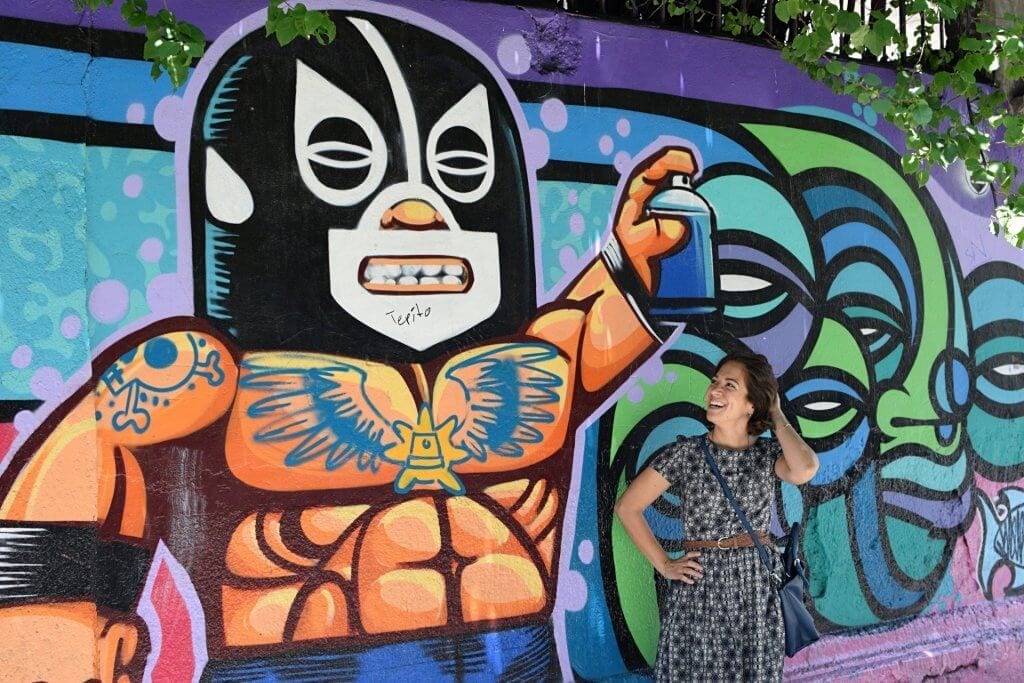 Condesa and Roma are probably my favorite places in the city.

I lump the two together because they are side-by-side and because they both have a similar feel to them. Chock full of restaurants, cafes, funky art-deco and colonial architecture, and some of the nicest green space in the center.

These are the best neighborhoods in Mexico City in my opinion because they have a little bit of everything.

One of my favorite places to start the day is around Parque Mexico. On the weekends you’re sure to witness some yoga class going on, live music blaring in the bandstand, and plenty of dog walkers enjoying the constant Spring weather we enjoy in Mexico City.

This is also where you’ll find some of the best restaurants, taco stalls, and cafes. Don’t miss out on a flat white from Blend Station or a cold brew from Boicot.

The pastries at Panaderia Rosetta are unbelievable and the tacos at Los Juanes and El Tizoncito will have you revisiting Mexico City again and again just to eat them.

Read: Mexico City Travel: Mercado Roma, What to do in Condesa, and The Best Tacos in Condesa and Roma 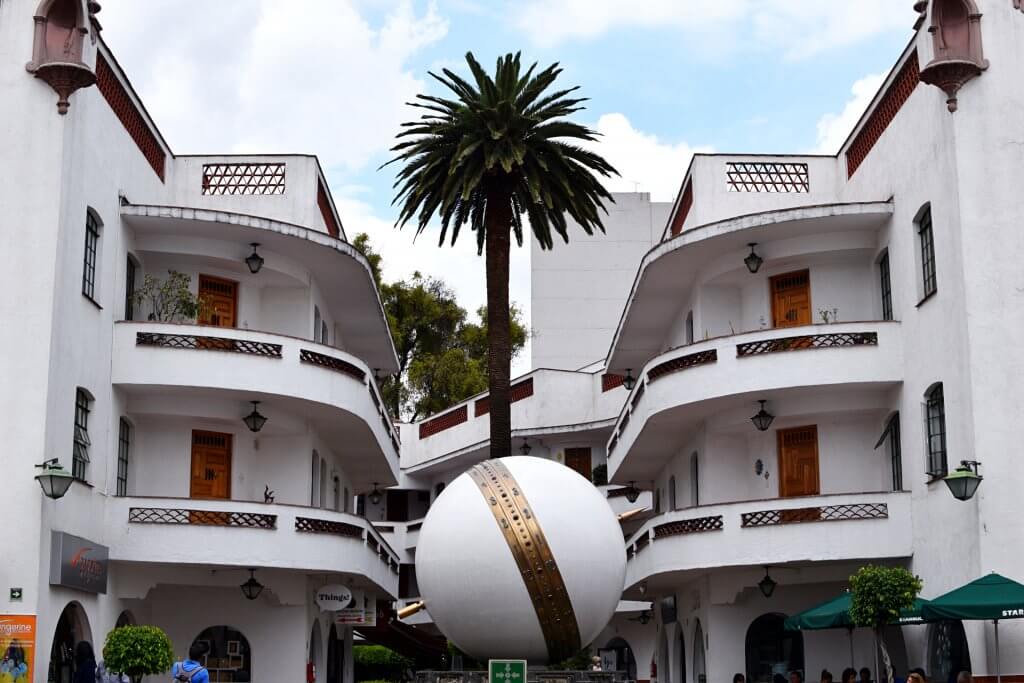 Polanco is one of the most expensive places to live in Mexico City. It’s home to designer shops like Gucci, Salvatore Ferragamo, and Tiffany & Co.

It’s also where you’ll find some of the most acclaimed restaurants in the entire country, including chef Enrique Olvera’s Pujol. It’s also home to some of the best clubs and late night bars among the expat crowd.

I would start a tour of the area in Parque Lincoln and weave my way up and down the streets above Emilio Castelar.

The shopping center Pasaje Polanco on Presidente Masaryk, has a really nice courtyard with a few different cafes where you can sit along the sidewalk and do some great people watching.

Read: The Best Restaurants in Polanco 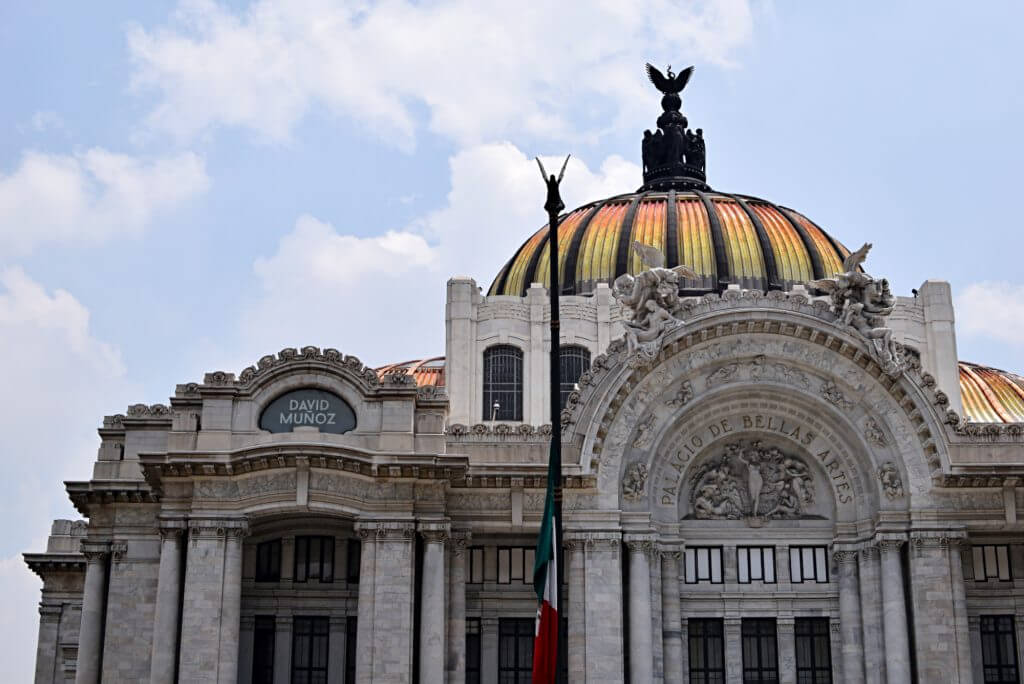 3. For a History Lesson: Centro Historico

The Zocalo, which is the main square, is a perfect place to start. The Cathedral dominates the view and is worth a look. It’s the largest in the country and holds two of the largest organs found in all of the Americas.

Spend some time exploring the side streets and definitely check out Palacio de Bellas Artes, the city’s opera house and art museum. It’s one of the most beautiful buildings in the city, both inside and out. Be sure to take a stroll down Paseo de la Reforma, too. 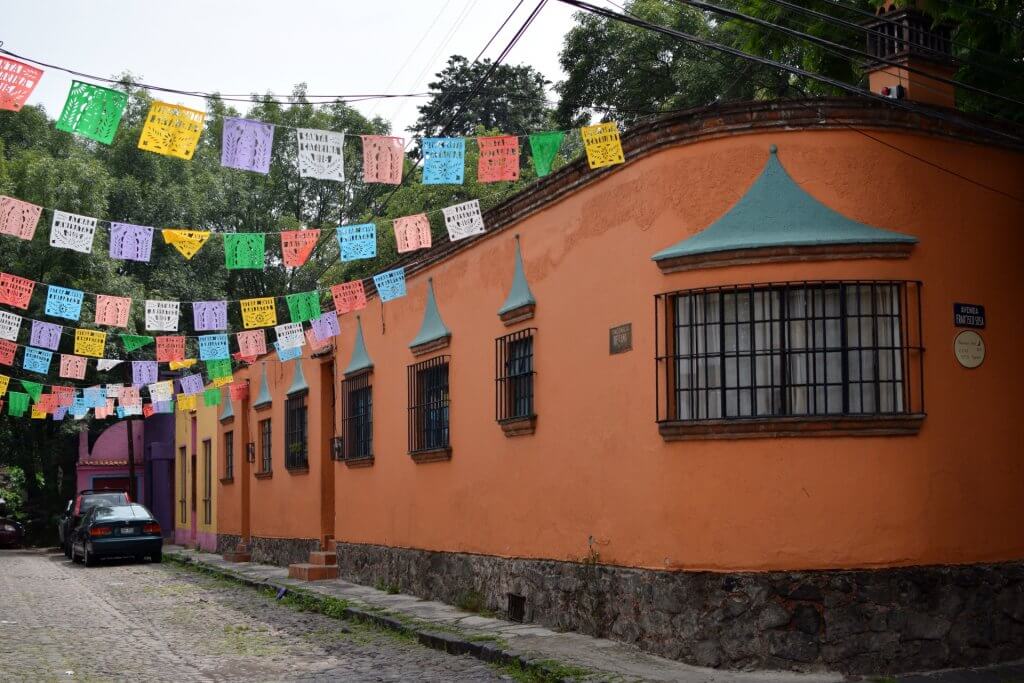 Juarez has quickly morphed into the new Roma, the new cool neighborhood in Mexico City.

This is where to come for artisan chocolate at La Rifa, for Italian gelato with a Mexican flare at Joe Gelato, and for the best mixiote tacos in the entire country (yes this is a totally biased opinion) at Exquisitos Tacos de Mixiotes.

However, within the Juarez neighborhood is one of the best culinary areas for Asian food, little Korea. Along Calle Londres, as it meets Avenida Chapultepec is a row of Korean restaurants and grocery stores that should not be missed if you’re feeling like you need some kimchi in your life. Na De Fo is my favorite in particular. 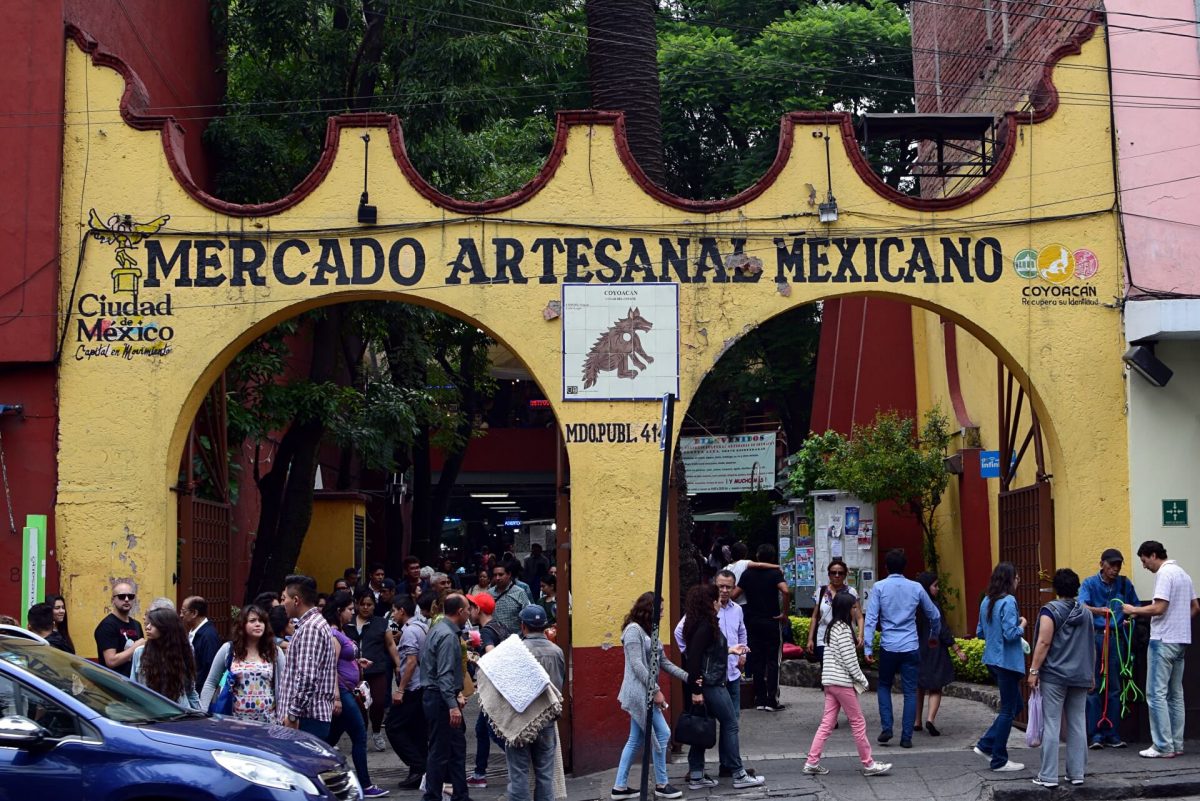 Coyoacan is the best neighborhood in Mexico City to learn about its torrid colonial history. In the main square, you’ll discover Hernan Cortez’s home.

The cathedral was built on the site of a school for the children of the Aztec nobles. No doubt with the very stones that were used to build the school.

In Coyoacan, you’ll also find the home of beloved Mexican writer Octavio Paz. It’s free to walk around and well worth reading a few of the plaques which are in both Spanish and English.

Whether it’s a stop at the Mercado de Antojitos for a fried quesadilla or you sit for a few tostadas in Mercado Coyoacán, you’ll eat well in this neighborhood just south of the city center.

Enjoy a coffee at El Jarocho, a family-owned coffee roaster and cafe that’s been around for generations. Cafe Avellaneda is also a fantastic spot for a latte or espresso.

This neighborhood is where Mexico City locals head on a Sunday to enjoy a meal al fresco, to wander the cobbled streets, to shop at the Mercado de la Artesanias.

Grab a cup of esquites or some churros and sit enjoy it in the Jardin Centenario. There are plenty of benches around and it’s nice and shaded.

Read: What to do in Coyoacán 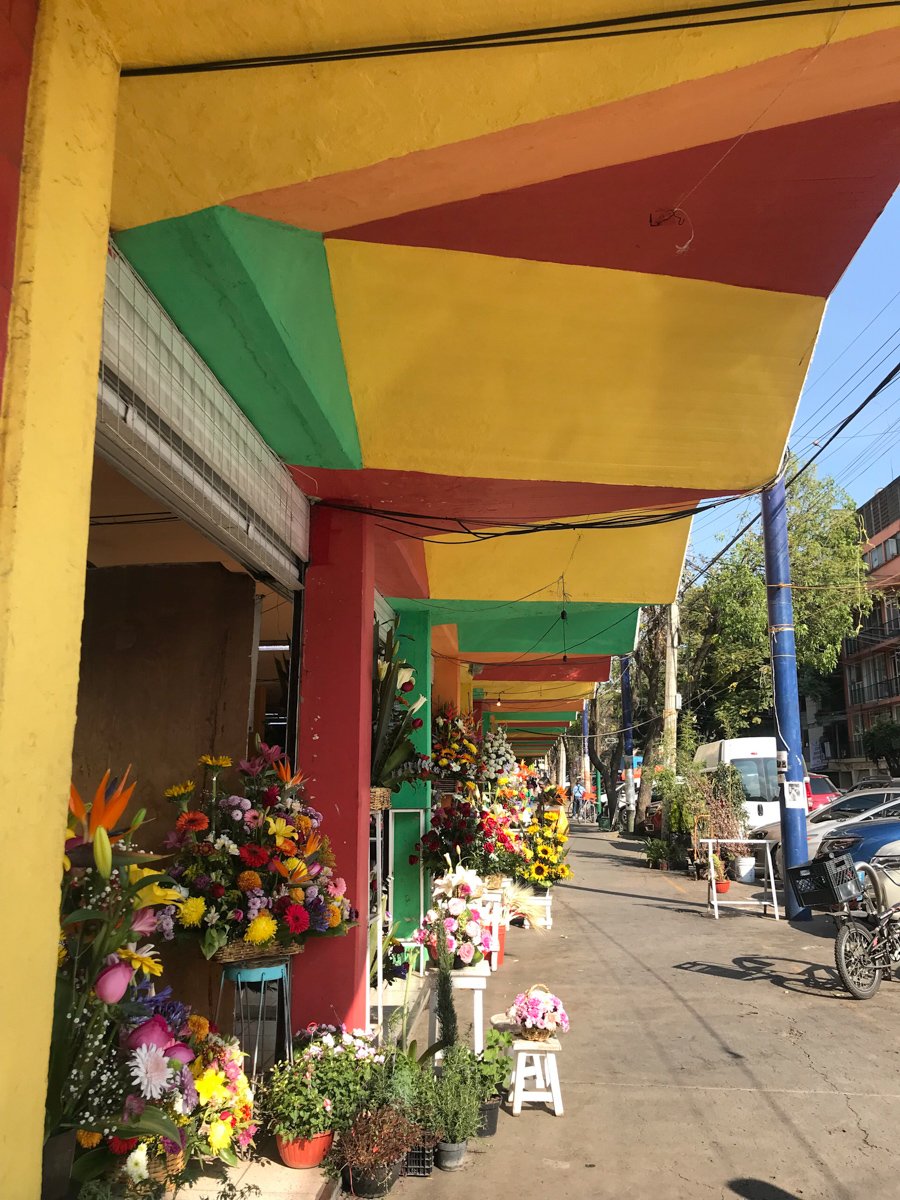 One of my favorite spots for dancing and enjoying a few buckets of coronas (or giant margaritas). Zona Rosa, technically part of the Juarez neighborhood, is also where most of the LGBTQ-friendly nightclubs can be found.

It’s really centrally located – between Roma and Centro, Zona Rosa is easy to get to by foot or by metro (Insurgentes station).

There are also some really awesome restaurants here and the late-night street food is some of my favorite in the city.

Enjoying the beautiful historical buildings in the Centro Historico

Cuauhtemoc is confusing because it’s a delegacion, which makes up several different neighborhoods in Mexico City in the downtown area, but it’s also the name of a particular neighborhood.

In this instance, I’m referring to the neighborhood in Mexico City which is between Chapultepec Park and Jardin del Arte and runs just north of Paseo de la Reforma.

Rio Lerma is the main vein of this Mexico City neighborhood and it’s where you’ll find all of the great spots like El Moro for Churros, Tacos Gabriel for outrageously delicious carne asada, and Taco Don Guero for the best pastor and suadero tacos. 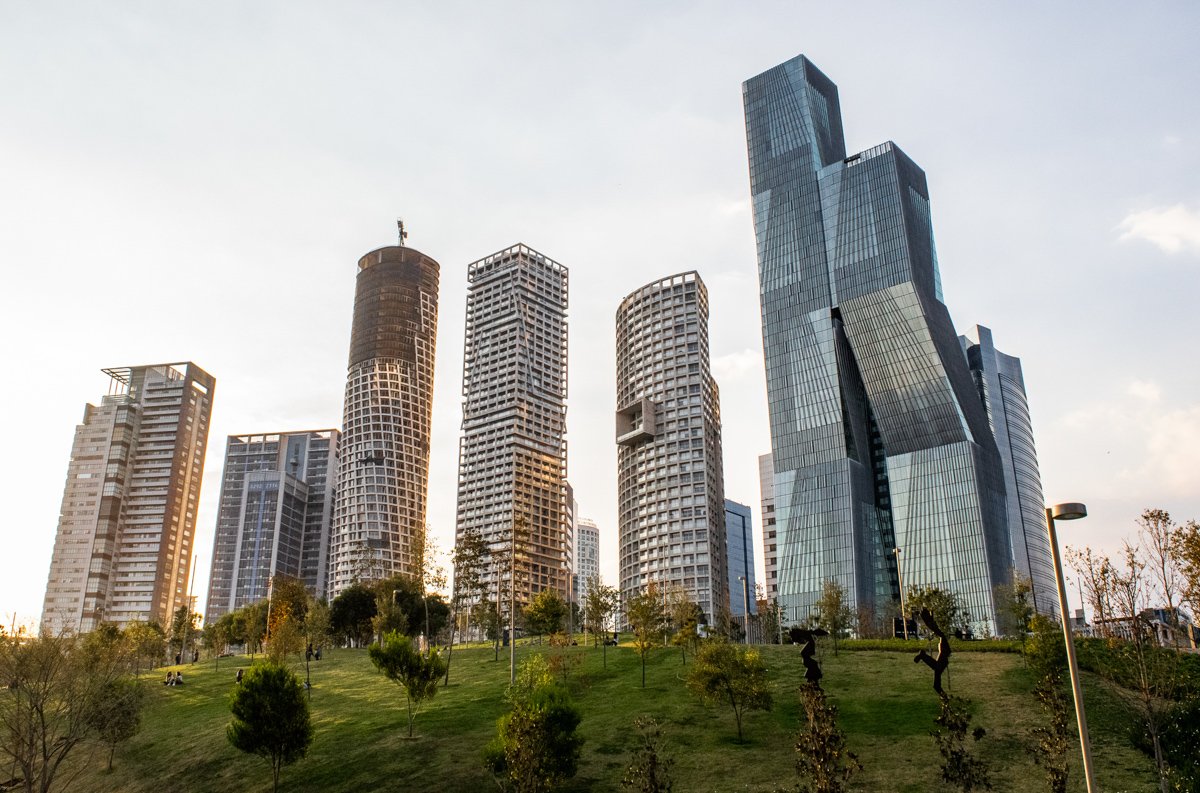 Santa Fe has a totally different look than any other neighborhood in Mexico City with its modern skyscrapers and beautiful park.

8. For the After Work Crowd: Santa Fe

Santa Fe one of the newest neighborhoods in Mexico City and is an area that cropped up after the 1985 earthquake.

Most big businesses moved their headquarters to this Southern suburb and it’s grown exponentially ever since.

Due to the terrible traffic of Mexico City, many people want to live as close to their work as they can.

Basically, that’s led to a business district full of shopping malls, apartment buildings, and great after-work drink spots. It can be a pain to get to from the city center, but it’s worth a little explore.

However, it’s also worth checking out even as a visitor. The park there, La Mexicana, is so stunning and you get to take in the views of these huge and modern skyscrapers.

Inside the park, you can ride bikes, simply walk the paths, soak in the sun on a bench, or head into one of the many restaurants that are actually inside the park. Porco Rosso is a personal favorite but there are about half a dozen places to choose from.

Watch: A Totally Different Side to Mexico City (Santa Fe)

Hi Laura! I’m going to CDMX in a month - after wanting to go for years! Anyway for part of our trip we are staying in Colonia Santa María la Ribera as I found an air bnb I became obsessed with lol. After reading a bit about it I see it is a bit rough still. Any advice on that area?

I really like Santa Maria la Ribera. I don't know why it gets that reputation when the park is stunning, the restaurants there are awesome (be sure to check out Chilakilliers for brunch one day!). It's close to the city center neighborhoods but much more affordable. I would perhaps just make sure to take Ubers at night, but otherwise, I really enjoy that neighborhood. In my experience, it's mostly just full of older/retired people!

I can't wait to get to Mexico City. Heard so many good things about it!! We'll definitely be staying in Condesa or Roma after reading this. Thanks!

Wow - so many fantastic neighbourhoods to explore! Will definitely keep this in mind for when I visit the city :)