Wondering how much it costs to travel Costa Rica? It was a whole lot more than I thought it was going to be, that’s for sure!

The Costa Rican Currency is called Colones, but US Dollars are widely accepted in almost all of the tourist areas.

Even the grocery store accepted dollars in Manuel Antonio! You can even take US Dollars out of ATMs in Costa Rica. Usually, it’s cheaper to pay in Colones if you’re going to pay in cash since people seem to make up their own exchange rates.

I’m going to give the prices of everything here in US Dollars because I booked a lot of things with my bank card and don’t really know how much they were in Colones. I’ll list local things like meals and drinks in Colones and Dollars when I can.

How Much Does Costa Rica Cost?

I would say we were mid-range spenders on this trip. You could definitely do it a lot cheaper by cooking your own meals and staying in dorms or other shared accommodation. You could also do it for A LOT more expensive, too.

I chose to stay mostly in Airbnb places and checked out a few hotels and hostels in San Jose along the way. I ate out for every meal, but often bought beers from the grocery store because they were so much more expensive to drink at bars.

I used buses to get around, which are definitely the cheapest modes of transport. Uber is in San Jose and I used it to get to and from the airport for much cheaper. You can pay taxis or take private shuttles. If you wanted to avoid the buses you could fly from San Jose to almost any major tourist spot around the country. 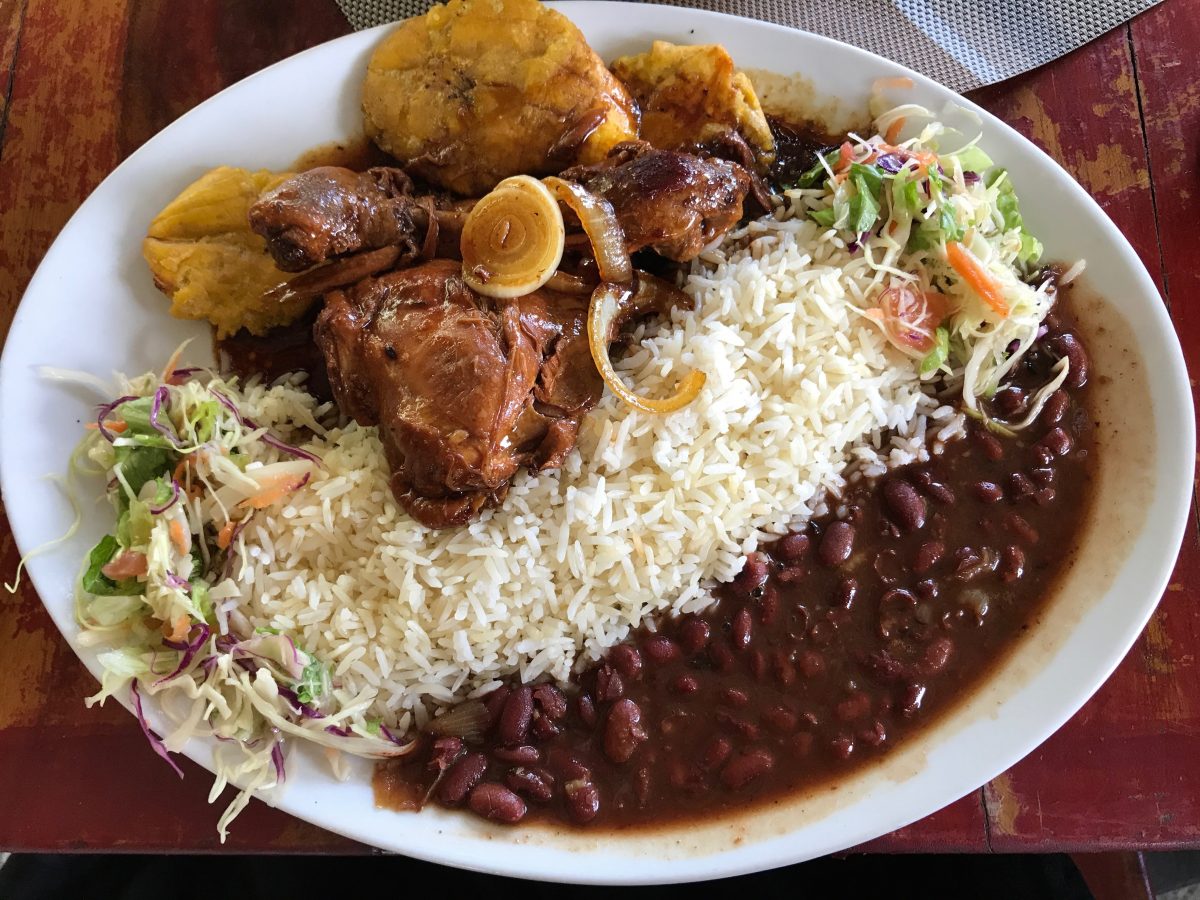 How Much Does Food Cost in Costa Rica?

Food was one of my biggest expenses on this trip. I wanted to eat fresh seafood and try different meals. I also wanted to take a break from my usual routine of cooking for myself since I was on vacation and all.

The cheapest food options in Costa Rica are what’s called a Soda.

They’re small cafes locally run and offer different Costa Rican classics like Gallo Pinto or Casados. You’ll never go hungry – portions at a Soda are seriously large. A meal at a soda costs anywhere between 2,000-4,500 Colones ($3.50-$7.75) depending on where you are and what you order.

There are tons of seafood restaurants along both costs with a range of prices. If you want to eat for cheaper, look for busy no-frills places with plastic chairs and locals eating inside. Seafood meals cost anywhere from 3,500 Colones upwards of 12,000 Colones ($6.00 – $20 US).

A lot of hotels and even Airbnb places we stayed included breakfast, so we basically didn’t spend any money on breakfast. Lunches were usually spent at a Soda since they’re not open for dinner. In total, for two people, we spent 72,746 Colones on lunches. That’s $127 or roughly $9 per day for two people.

Dinners were often a bigger splurge and in seafood or other restaurants could cost between 3,500 Colones to 10,000 Colones per person (up to $17). Some days we ordered what we wanted and other days we were a little more budget conscious and ate simply. In total, for two people, we spent 157,040 Colones. That’s $274 US or roughly $20 per day for two people. 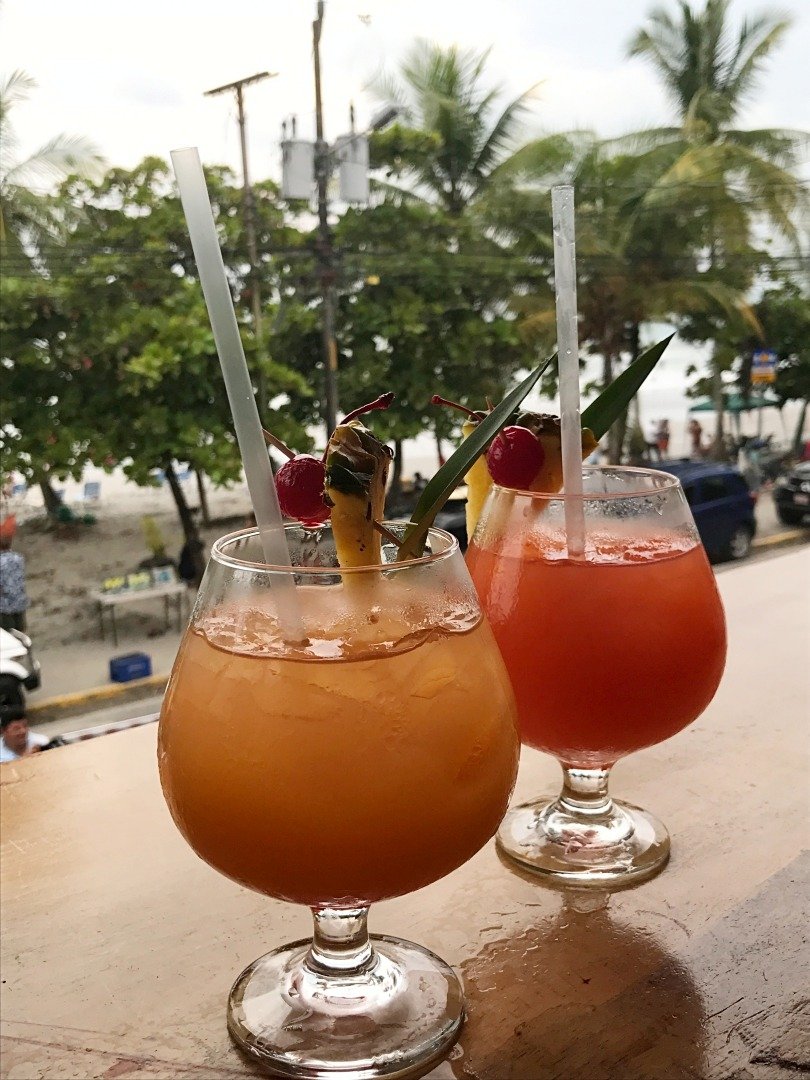 How Much Does Accommodation Cost in Costa Rica?

I pre-booked all of our accommodation either on Booking.com or on Airbnb before going to each destination. Costa Rica didn’t seem like the sort of place where you could just show up and find a hostel – I only saw one in Manuel Antonio and one in Puerto Viejo and from what I could tell, they were no cheaper than the places I found online.

As regular readers know, I’m an Airbnb loyalist and I booked both of our long stays in Manuel Antonio and Puerto Viejo through them. I booked our single night places in San Jose through Booking.com and found some really great hotels and hostels there.

In total, for 14 nights, we paid $429 USD. That’s roughly $30 per night for two people. That was always for either a private house or a private room. We never slept in dorm rooms during our trip to Costa Rica, even if we stayed in a hostel.

If you’ve never used Airbnb before, sign up with this link to receive up to $35 off your first booking! 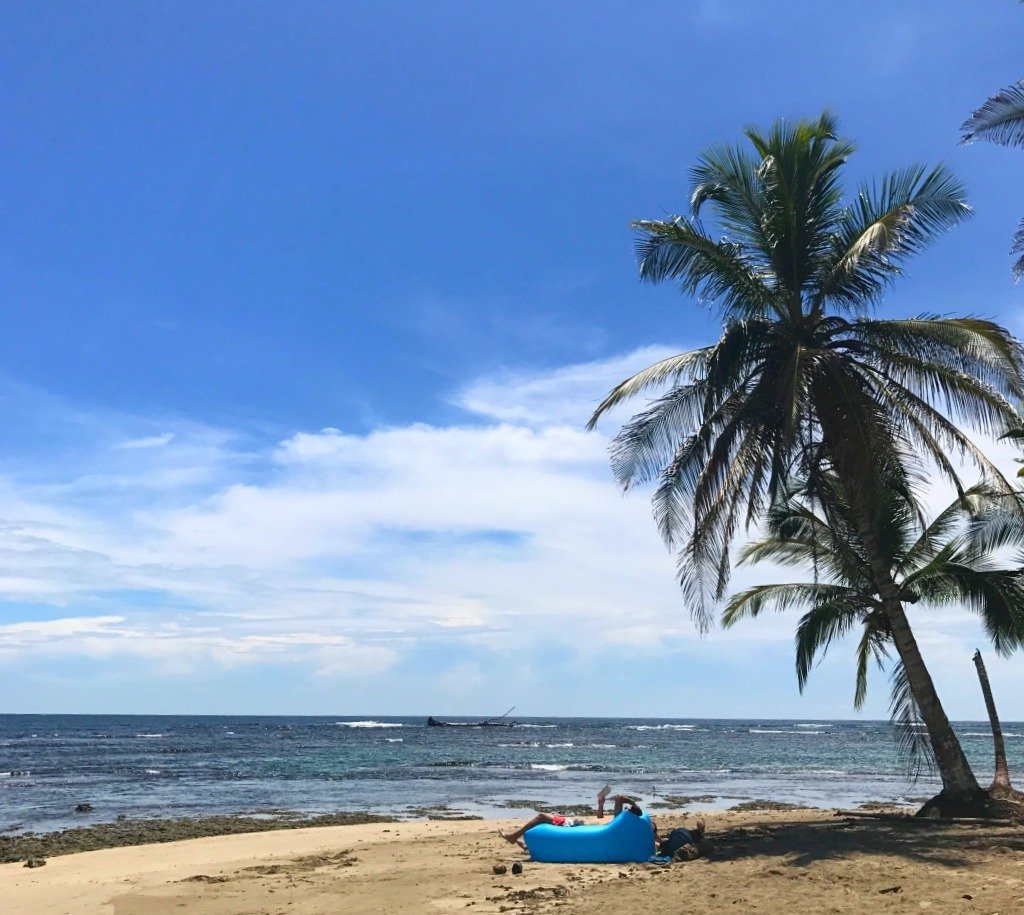 How Much Does Beer Cost in Costa Rica?

But I also noticed a lot of craft beer, which we dabbled in a bit while we were in Costa Rica. San Jose has some great craft beer bars and we found a nice one in Puerto Viejo, too. Craft beers in the grocery store were about 1,200-2,000 Colones for a bottle ($2-$3.50). We sometimes paid crazy amounts to try it in bars around the country. Usually about $7 per pint (places like this almost always had their prices in USD!). 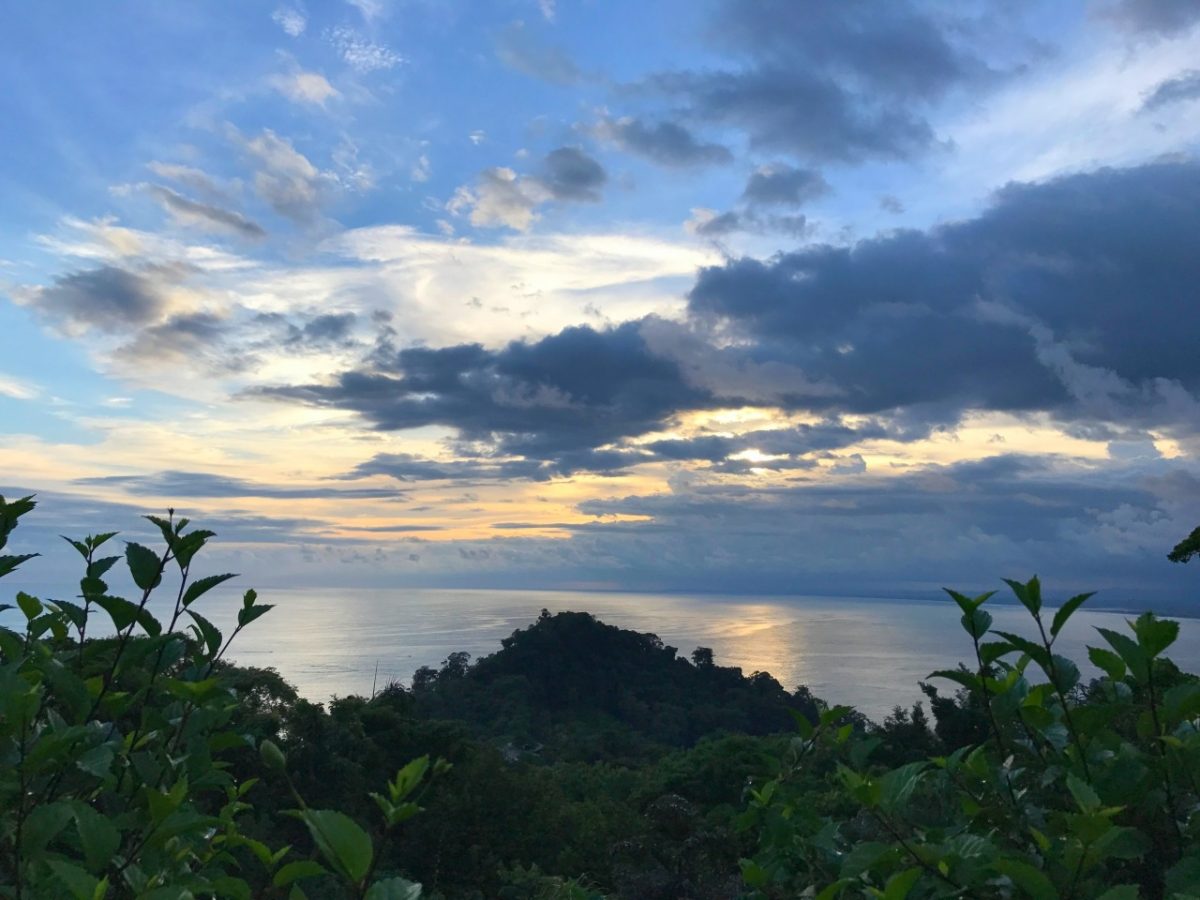 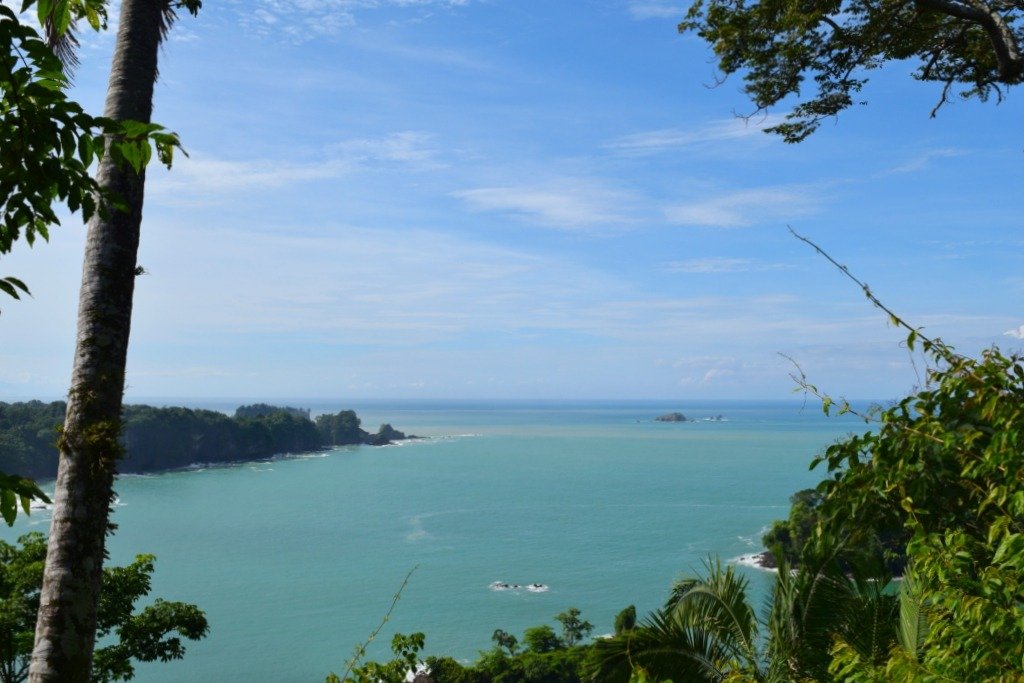 How Much Does Transportation Cost in Costa Rica?

Transportation in Costa Rica can be pretty expensive depending on how you want to get around. We used Uber around San Jose and buses and bicycles everywhere else.

Renting a car is really expensive, in my opinion, and unless you really want to get around to see tons, isn’t really necessary since buses go everywhere.

That’s for two people, so just under $50 each. That included our taxi to and from the airport in San Jose (we used Uber which is half the price of local taxis), buses to and from Manuel Antonio and Puerto Viejo, and two days worth of bike rentals while in Puerto Viejo.

The buses were definitely the biggest expense and for what you get, are kind of overpriced. There are what feels like a million bus stations around San Jose, but they are well organized and both of our buses left right on time.

The bus from San Jose to Manuel Antonio costs 4,575 Colones or $8 per person each way.

The bus to Puerto Viejo costs slightly more at 5,525 Colones or just under $10 per person each way. I’ll be writing more about getting to these destinations in a separate post and will link to them here once they go live. 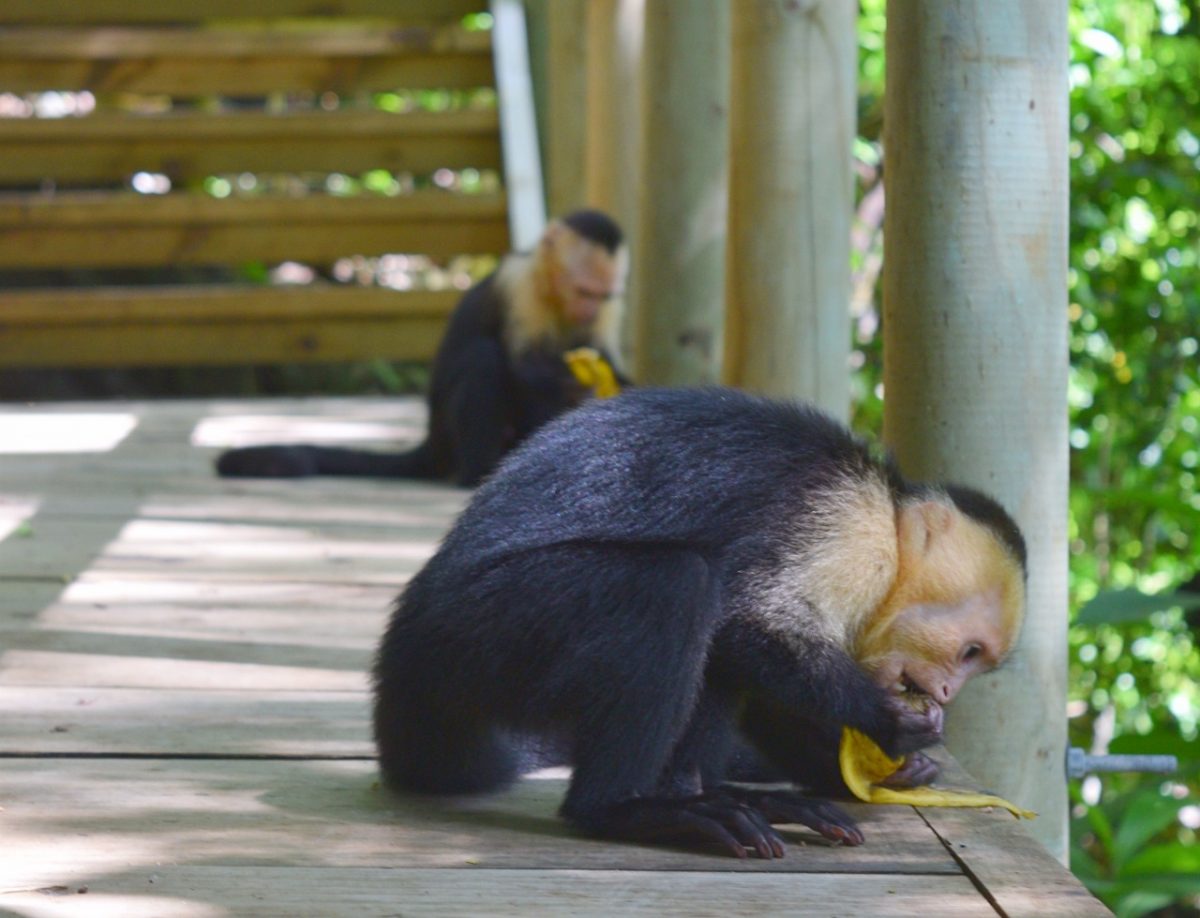 Some of the national parks around the country have fees or ask for donations. The Manuel Antonio National Park was a hefty $16 for entrance. If you wanted a guide it was an additional $25 per person (we opted to go in guideless).

If you are using a debit card to take cash out of ATMs, look for the two major banks in Costa Rica – Banco Nacional and Banco de Costa Rica. They both charge 1,500 Colones which is just under $3. Scotiabank charged slightly more at the time that I was there in July 2017.

I advise carrying both Colones and US Dollars in tourist areas.

In some situations, I wish I’d had US Dollars to pay in because the exchange rate was more favorable to the dollar.

When I paid with Colones it ended up actually costing me more. Sometimes it will work out the other way around so just pay attention to pricing. Almost all restaurants and bars take debit and credit cards.

The only exceptions to the dollar rule are small local restaurants, taxis, buses, and street vendors who almost exclusively accept Colones.

Tips for the Budget Traveler

You could easily do this a lot cheaper if you simply opted to stay in shared accommodation Airbnb places and if you cooked for yourself once or twice a day.

I didn’t find hostels to be that cheap in Costa Rica so if you do want to find cheaper places to stay, do your research well beforehand on Airbnb, booking.com, Hostel World or whatever your preferred booking site is.

I think another way I could have saved more money was to book things in advance a bit more.

I booked the trip about two weeks before actually going there, so there weren’t many accommodation options left and it didn’t give me much time to research what the cheaper food and drink options would be.

If you have a car or are traveling slowly, look for the larger supermarkets in the bigger towns and cities to buy a few things in bulk and take them with you.

Fruit is very expensive, in my experience there, so just price things up and meal plan during your time there. Food in restaurants wasn’t exactly “can’t-miss-it” good, so if you try a few different things at markets half the time and cook for yourself the other half, you’ll spend a lot less than I did. 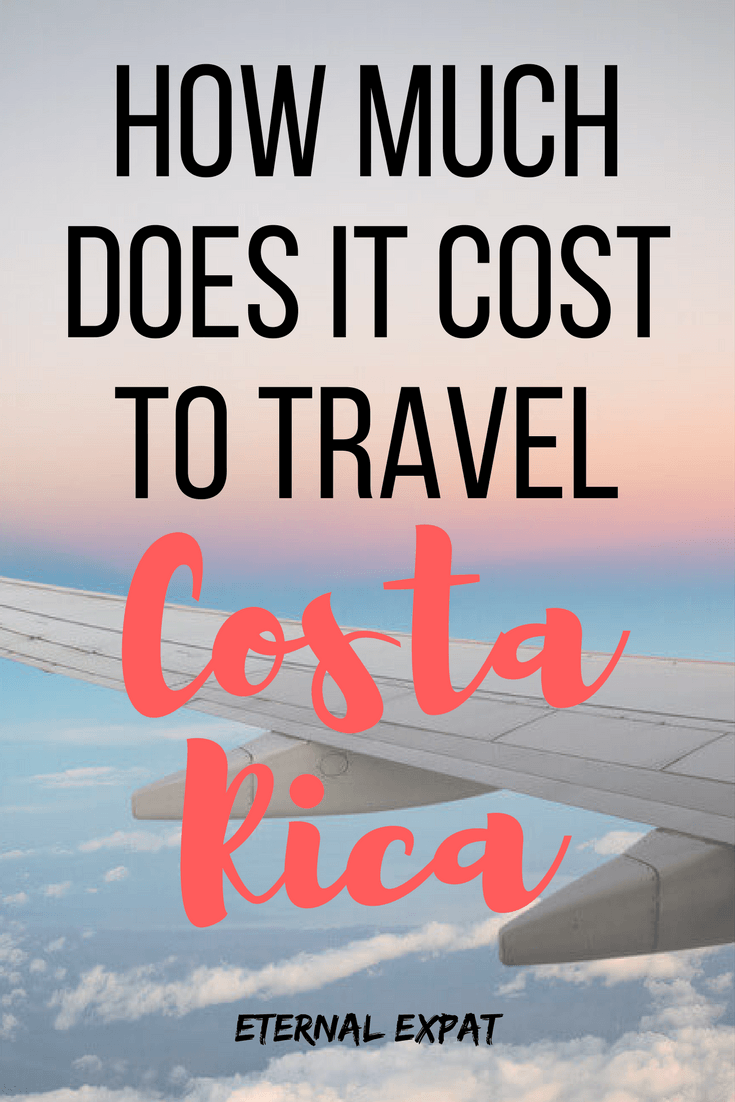