Oaxaca food is the number one reason to visit this town and indeed this entire state.

The food of this southern state is some of the most famous (moles), the cheese is what’s used in quesadillas around the country, and then there are some things that you can only have when you’re here.

Food is the main reason I wanted to visit Oaxaca in the first place.

It’s been a place that’s been high on my Mexico bucket list since I moved to Mexico last year and when I finally got there last month it was like coming home. I loved the city and the food even more than I thought I would.

This is a list of the best foods in Oaxaca that I ate and all the best restaurants in Oaxaca to enjoy those meals in.

At the bottom is a video of all the delights that I ate while I was in Oaxaca if you want to skip straight to that! 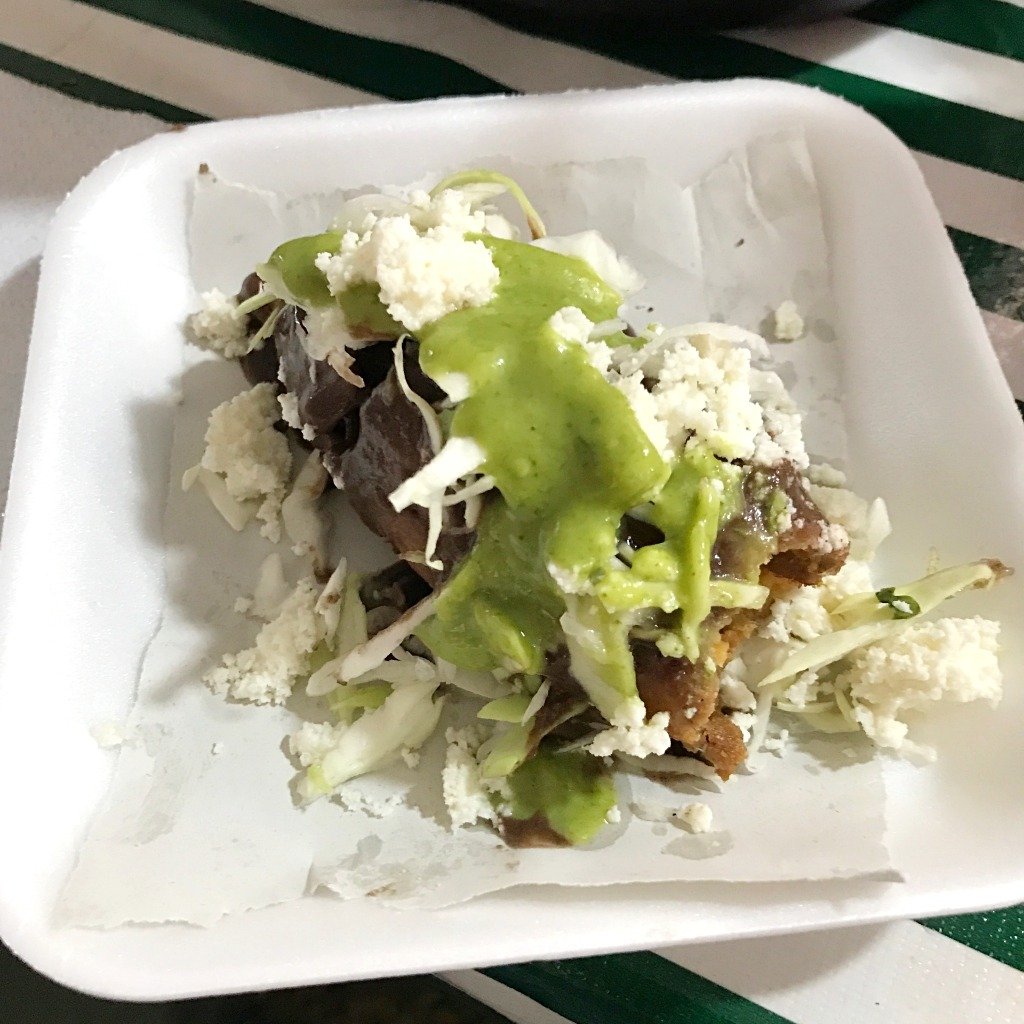 Always try the street food – this is a molote which is potato and chorizo stuffed in a tortilla and fried.

Okay, I’m starting with the one thing that I probably wouldn’t eat again, but these little grasshoppers are all over Oaxaca and you’ll eventually be tempted to try them. I had a bag of them that was doused in salt and lime and that’s mostly all it tasted of.

Until I started chewing. It’s a little, um, dry. Also, a few hours later I found a leg stuck between my teeth. But it was interesting if nothing else!

Okay, now onto the good stuff. There are seemingly endless types of mole to be had in Oaxaca. While not entirely a Oaxaca food, it’s a topping on food in Oaxaca that you definitely don’t want to miss sampling.

My absolute favorite mole that I had was the coloradito in the Mercado 20 Noviembre.

There are so many little food stalls inside the market where you can have the different types of mole. I also highly recommend having mole negro, rojo, amarillo (this one is SO good, probably my second fave), and chichilo. 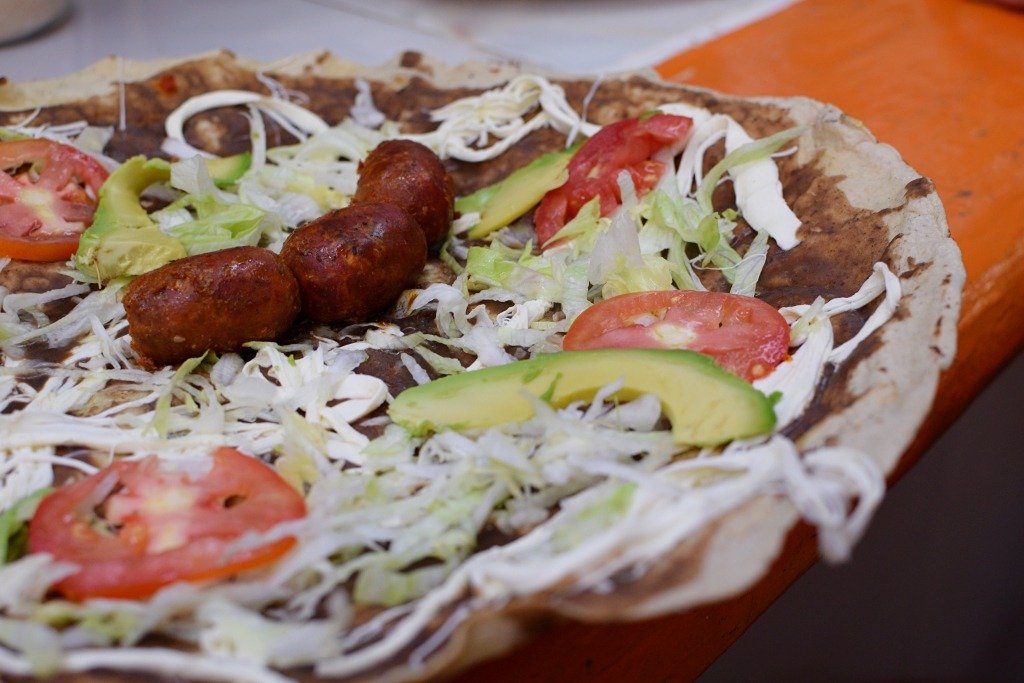 These Oaxacan “pizzas” are one of the most popular street foods in the city and indeed the most well known of Oaxaca foods on offer in the state.

Every market stall in Mercado 20 Noviembre and Mercado Merced sell their version of Tlayudas – simply look for the stacks of large, flat tortillas on the counters.

Another popular place to try tlayudas in Libres Tlayudas.

This little hole-in-the-wall restaurant doesn’t open until 9pm and it’s reputed that cars double park along the street just to get these calzone looking tlayudas. They are crazy delicious and piping hot when they come out.

The only thing I thought was a little strange was that they put the meat you want on the outside of the tlayudas. 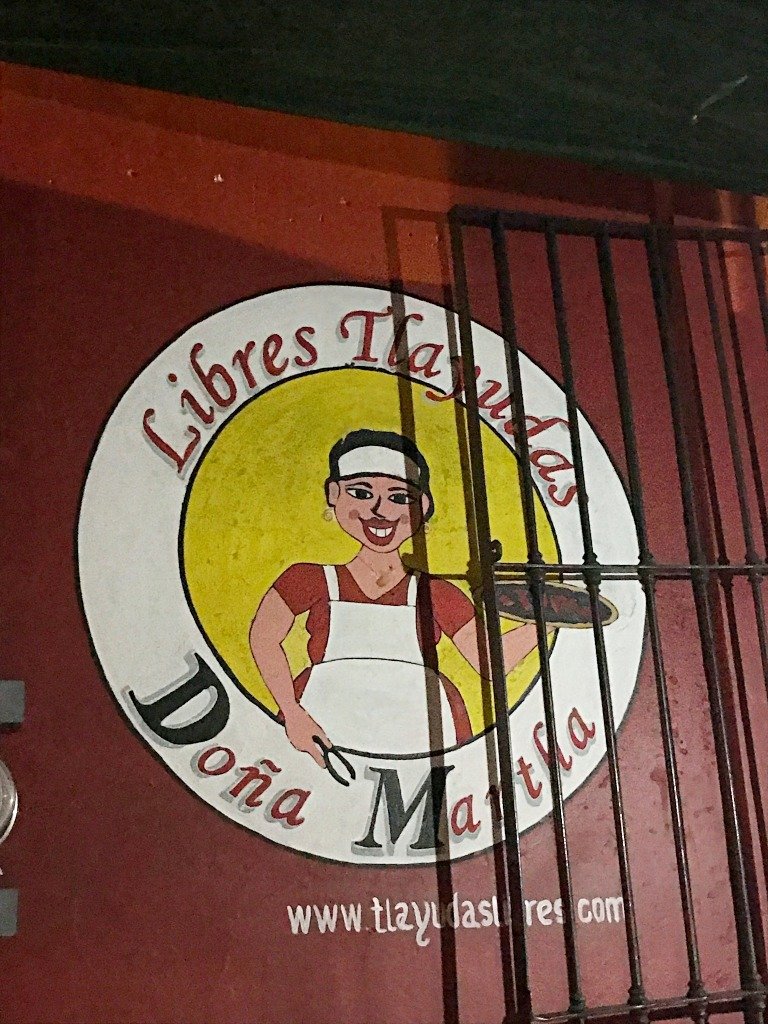 This is where you need to have a late night Tlayuda! 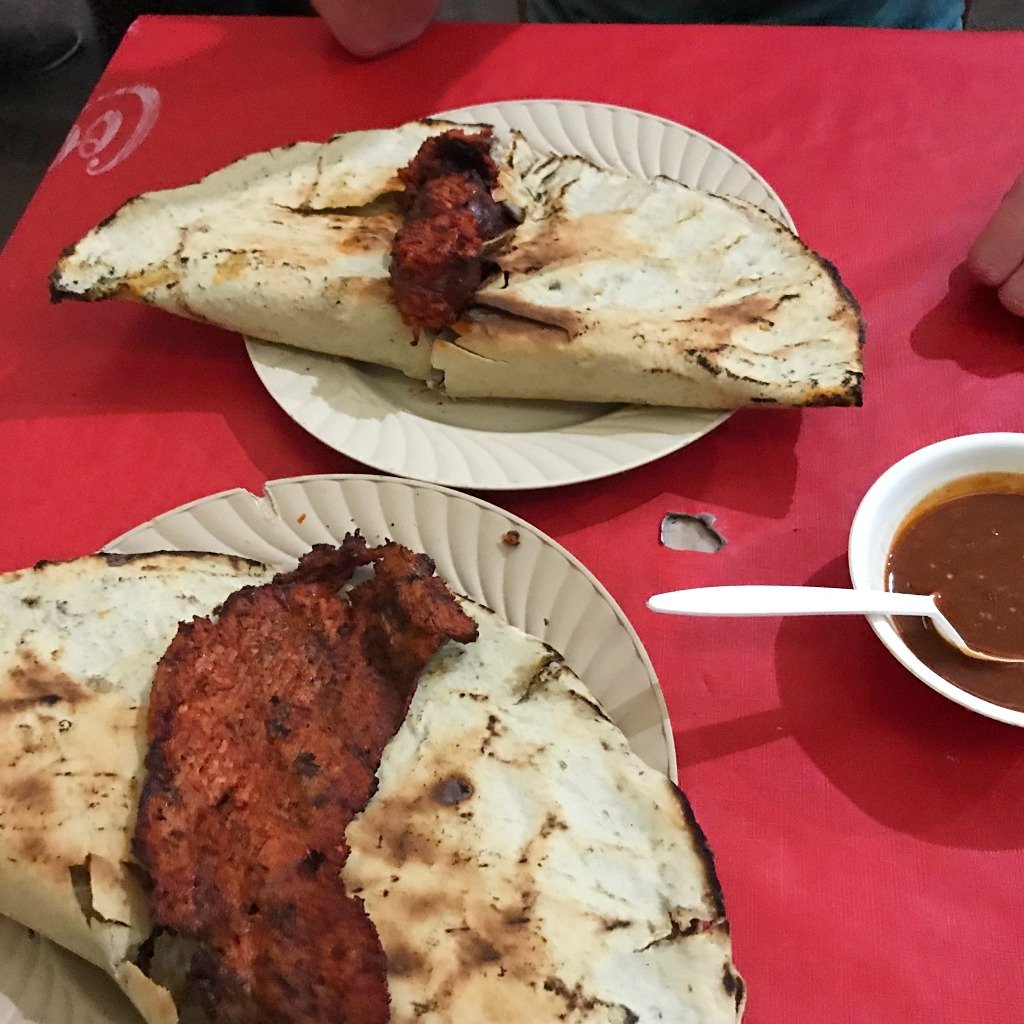 The folded over Tlayudas from Libres Tlayudas

If you only go to one restaurant in Oaxaca, it should be Itanoni.

It’s worth it though.

Some of the best things I ate here were the tetelas, which are freshly made tortilla hot-pockets filled with joy.

I tried the mushroom tetelas and the espirituosa which was a very interesting tasting herb. Almost menthal-like.

Another tasty Oaxacan-style food to try at Itanoni are memelas.

These are flat, round tortillas that are topped with different delights. There are tons of different toppings to try – costilla is a local dish that’s worth trying – theirs is delish!

Whatever you decide to try, you’re sure to enjoy the different, handmade tortillas. They’re cooked the old-fashioned way in a big, hot clay pot. Watching them is kind of

Whatever you decide to try, you’re sure to enjoy the different, handmade tortillas. They’re cooked the old-fashioned way in a big, hot clay pot. Watching them is kind of mesmerizing. 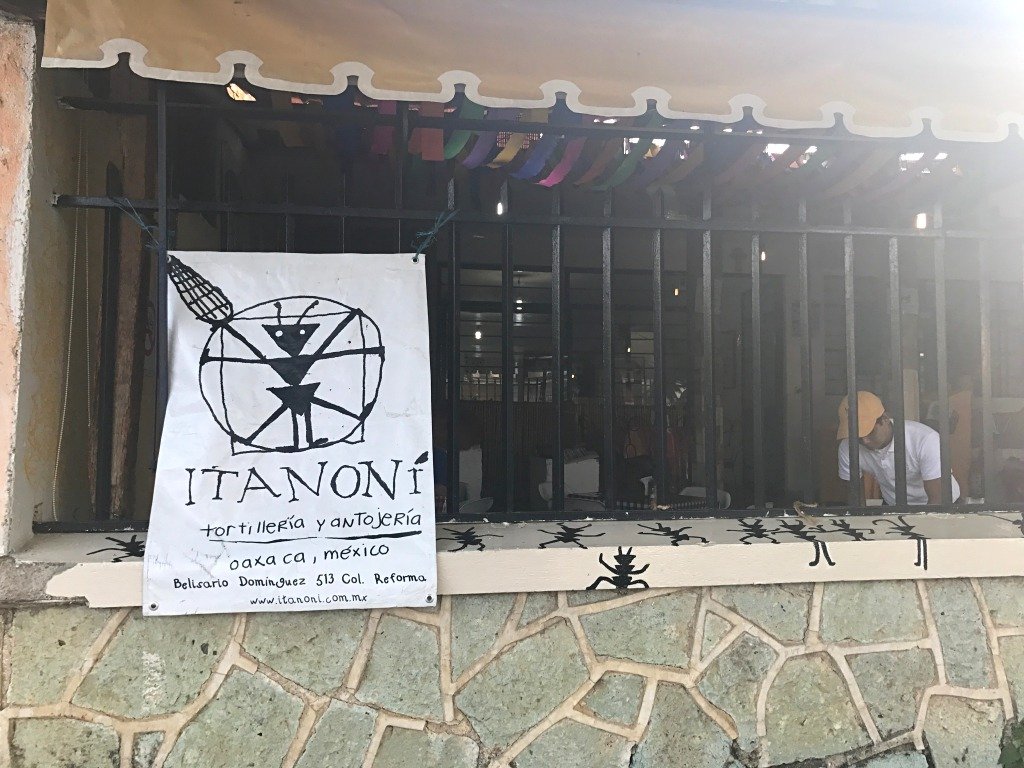 Mercado Merced is the SECOND best place in Oaxaca to have breakfast.

If you want to stuff your face with bowls of hot chocolate, bread, chilaquiles, and other classic Mexican breakfast foods. Fonda Florecita was my favorite place to have breakfast.

Their hot chocolate was so incredible and be sure to try the pan de yema – a sort of stale sweet bread that comes with hot chocolate that you dip into it. It’s perfection.

Other things I loved eating at Mercado de la Merced were entomadas – corn tortillas stacked on top of each other with an amazingly delicious sauce, onions and cheese, chilaquiles – corn tortillas topped with different spicy sauces, and tamales stuffed with chicken and mole.

Don’t make the mistake of thinking that you will eat two tamales. They’re enormous and crazy filling. One was even enough for my never-full boyfriend! 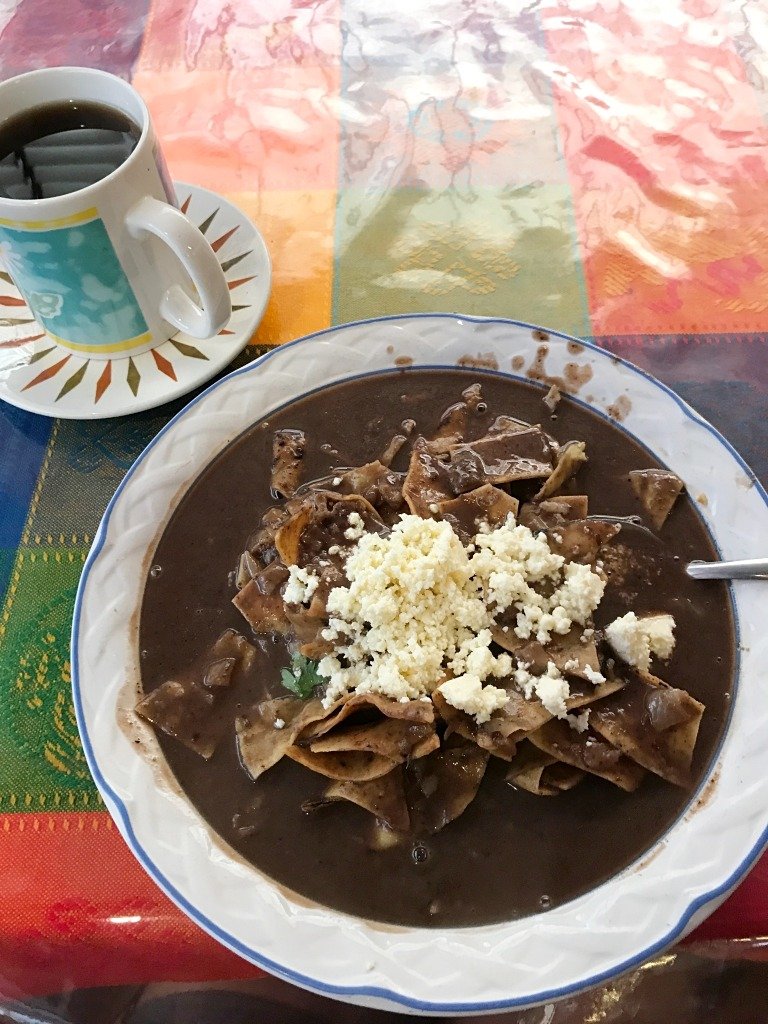 Oaxaca Drinks You Need to Try

While I’ve talked extensively about traditional Mexican drinks that you need to enjoy on your travels around Mexico, these listed below are specific to Oaxaca.

Tejate is a Oaxacan drink that you’ll see all around the city being sold out of big clay pots.

It looks like there’s some weird white stuff floating on top. It’s made with corn maize and the whole cacao seed. It’s super delicious and unlike anything I’ve ever tasted before.

It’s chocolatey without being sweet. It’s nutty and has a floral aroma and the texture is a little weird to get used to at first, but actually really nice. I highly recommend trying it on a trip to Oaxaca.

Chocolate is everywhere in Oaxaca, and for good reason, it is freaking delicious here.

It’s easy to find chocolate drinks around Oaxaca – every market and restaurant serves their own version.

You can either have it with water or with milk. I don’t really drink milk (I’m lactose intolerant and also I just don’t really like the taste) but chocolate en agua is no less creamy than any hot chocolate that I’ve ever had in the past. In fact, it’s creamier and richer without being sickly or too sweet. 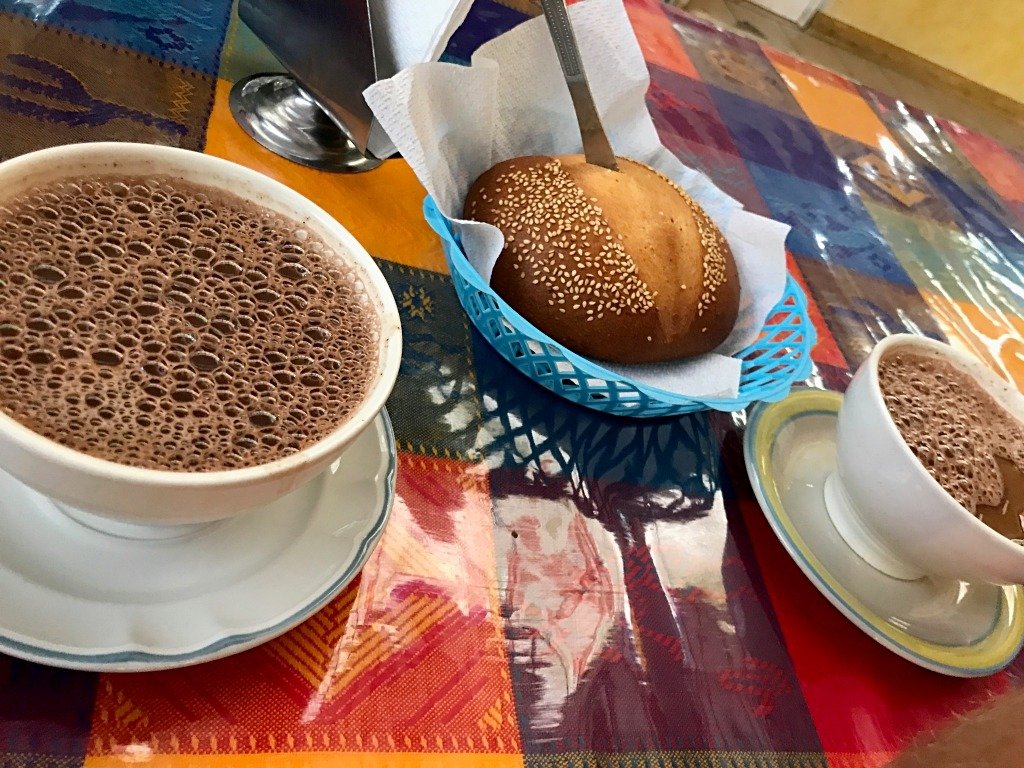 How delicious does this chocolate en agua look? You literally drink it from a BOWL.

I’ve had it a few times before in Mexico City and it’s not my favorite thing. It’s a little bit bland in my opinion.

But when I saw it on the menu in Oaxaca, I was intrigued. The one I had was at Comedor Betty in the Mercado de la Merced and it was really nice. Similar to the hot chocolate, it was served with pan de yema to dip in it.

It was richer than any atole I’ve ever had before, but still not too sweet. I really liked the texture which was thick and had chunks of cooked oats in it. 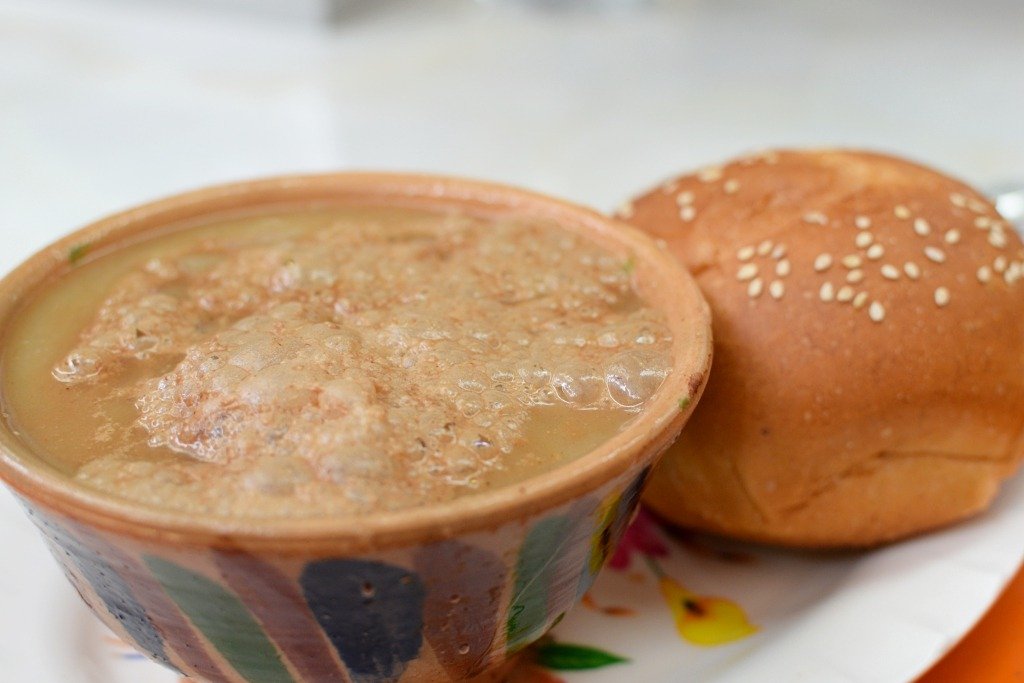 Chocolate atole with bread to dip

I didn’t discover Tierra Blanca until the second to last night I was in Oaxaca and I’m so bummed it took me so long to find it!

It’s such a cool little bar tucked into a restaurant on the outskirts of the city center. They brew their own beers, the prices are reasonable, and the staff are really friendly.

They have a small bar menu with some really tasty snacks and sandwiches. Definitely have the dark beer – it’s delicious. 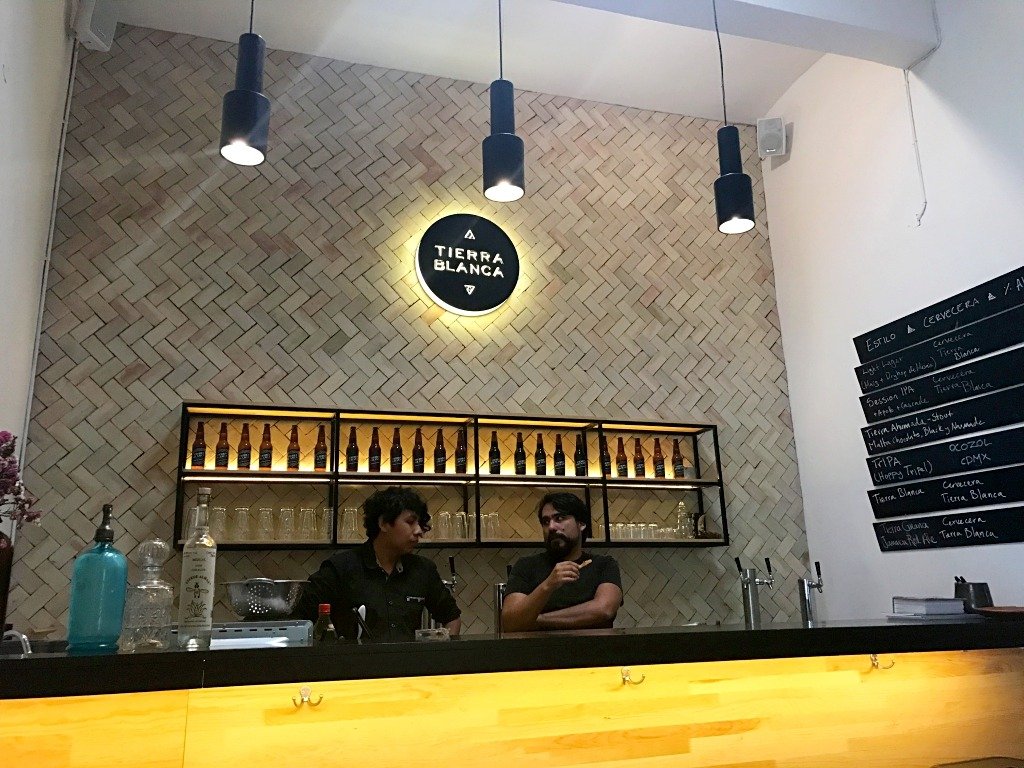 The bar at Tierra Blanca

Of course, it goes without saying that you need to sample some local mezcal while you’re in Oaxaca.

Los Amantes Mezcalería was one of my favorite little bars to try mezcal. They have different sampler options where you can try three for 180 pesos or 5 for 250 pesos.

There are literally dozens of mezcal shops around the city where you can sample different mezcals and buy bottles. Every bar and restaurant serves Oaxacan mezcal, too, so there’s no escaping this delicious tipple.

La Santisima is the most popular craft beer bar in Oaxaca. It’s right in the downtown area near the Santo Domingo Cathedral.

It’s a tiny little bar attached to the La Gourmand cafe which is also awesome and I highly recommend trying their homemade charcuterie, breads, and jams.

The beers change constantly and even in the short week that I was there, they had three different beers on draft. Be sure to try their own beers and some of the tapas to snack on alongside it. 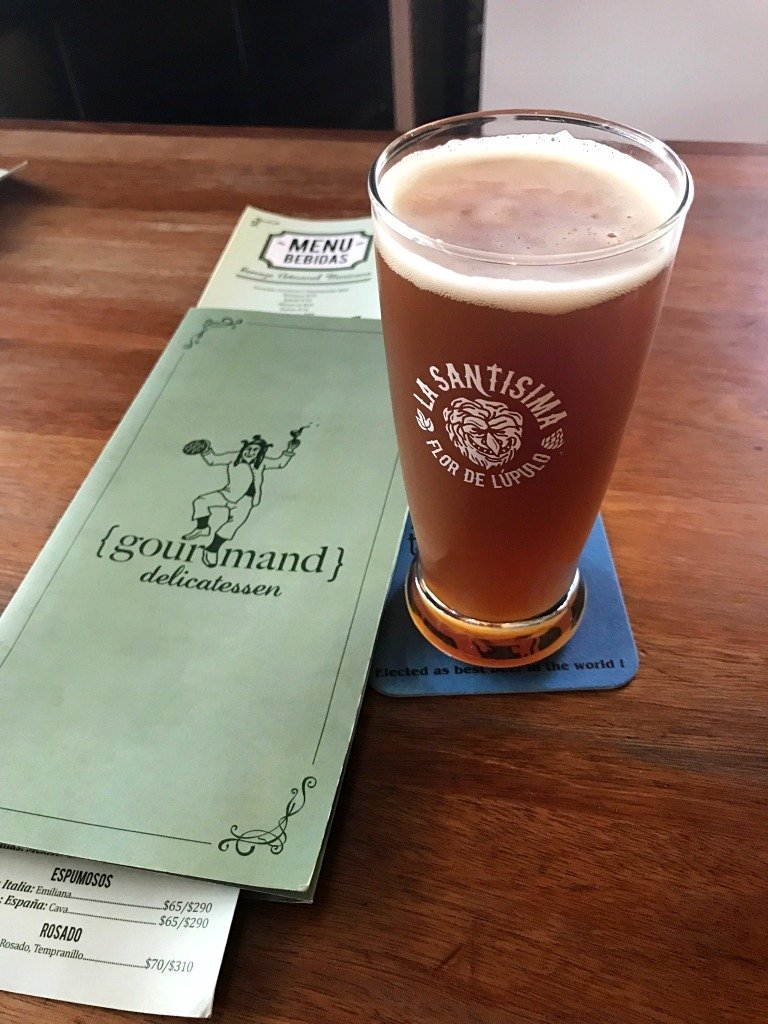 Video of Oaxaca Food and Drink

Here’s a little video of all of the best Oaxaca food that I tried and how much I spent on the different dishes. If you want to see more about life in Mexico and from my trip to Oaxaca you can subscribe to my Youtube channel here.

If you enjoyed this post, save it for later! 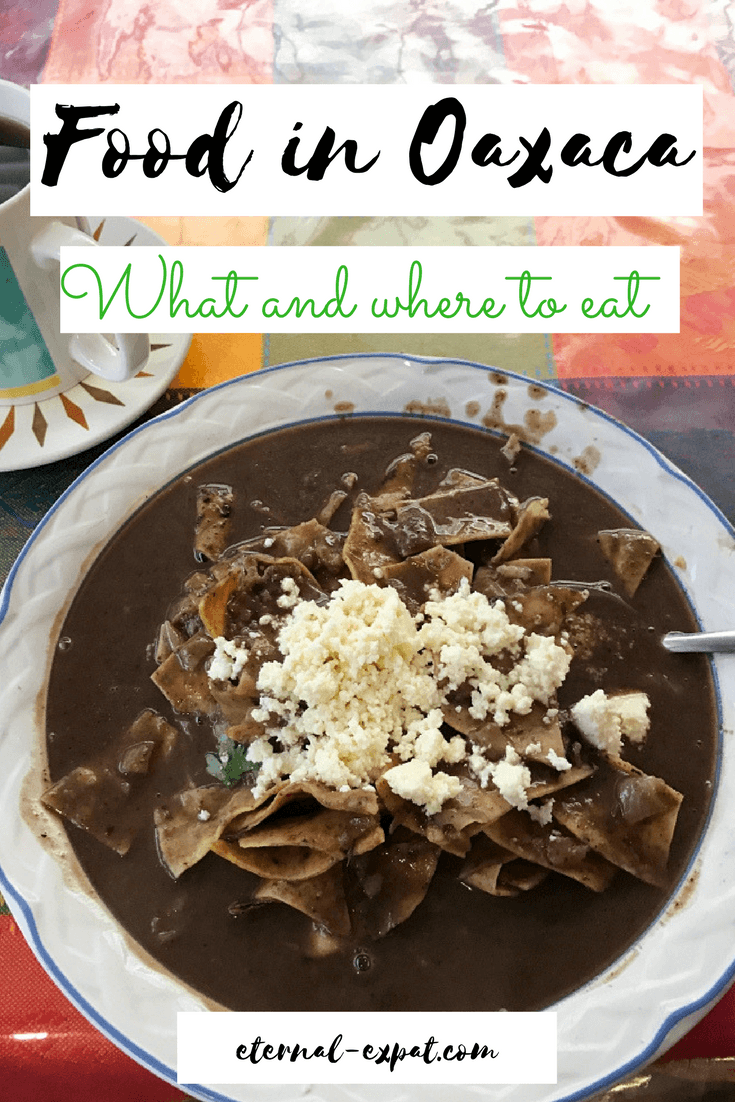 Going to Oaxaca on Sunday. Any problems with the food or drinks? How do you keep from getting sick? I read all your posts. Great! GRacias, Linda

Hi Linda! No problems with food or drink - there aren't a TON of street food stalls around the city in general, but the markets all cook things fresh and you won't have any problems with restaurants - just be sure to either use a filter water bottle or buy bottled water. No drinking the tap water in Oaxaca :)