Wondering where the best places to ski in France are this year? With the season right around the corner, we’ve pulled together a guide to help you knuckle down and book your ski holiday.

All in all, the French Alps is one of the best all-rounders in regard to skiing, with resorts catering equally well to novices as to experts and younger children. Read on for our lowdown on the top France ski resorts for beginners, pros, and families.

Ski resorts in France generally open for the season toward the end of December with January through March providing the best powder. However, the highest places to ski in France tend to receive snow a little early which makes this ideal if you want to squeeze in a pre-Christmas getaway.

Unless you are travelling with your own kids, one time to proceed with caution when going skiing in France is during February. Resorts are extremely busy throughout the month due to the French and British school holidays.

What to look for when choosing ski resorts in France

It often works out best to book a ski package with a provider where you’ll pay a lump sum for your airfare, coach transfer, and accommodation. Generally, you will have the option to choose all-inclusive or partial-board.

When booking your ski package, check the terms carefully to see what’s included. Consult the current rates for lift passes, equipment rental, and lessons – bearing in mind that prices can fluctuate throughout the season.

Even when you think you’ve found the cheapest places to ski in France, skiing in France can work out costly once you take into account all the extras. 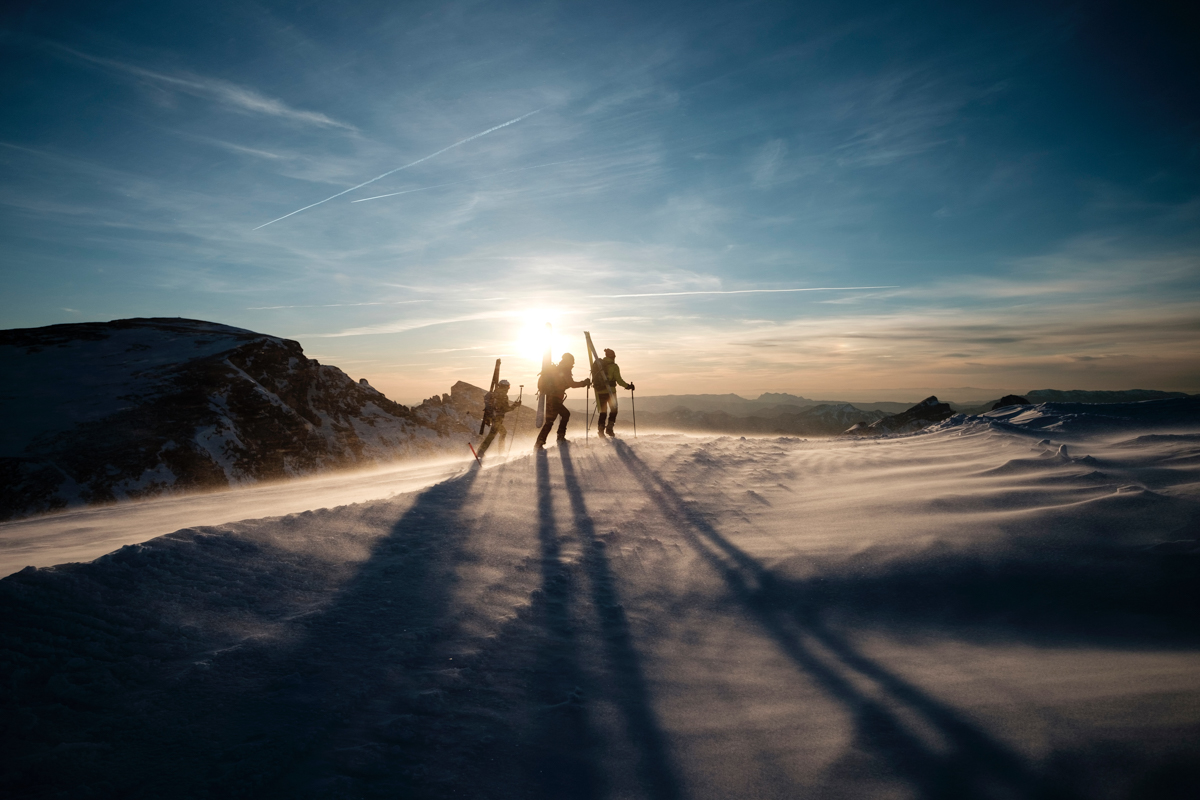 An overview of the best places to ski in France

Before we zoom in on the resorts, here is a quick overview of the best places to ski in France per category.

Best Places to Ski in France

Now, here are the 10 best ski resorts in France for all types of travellers. 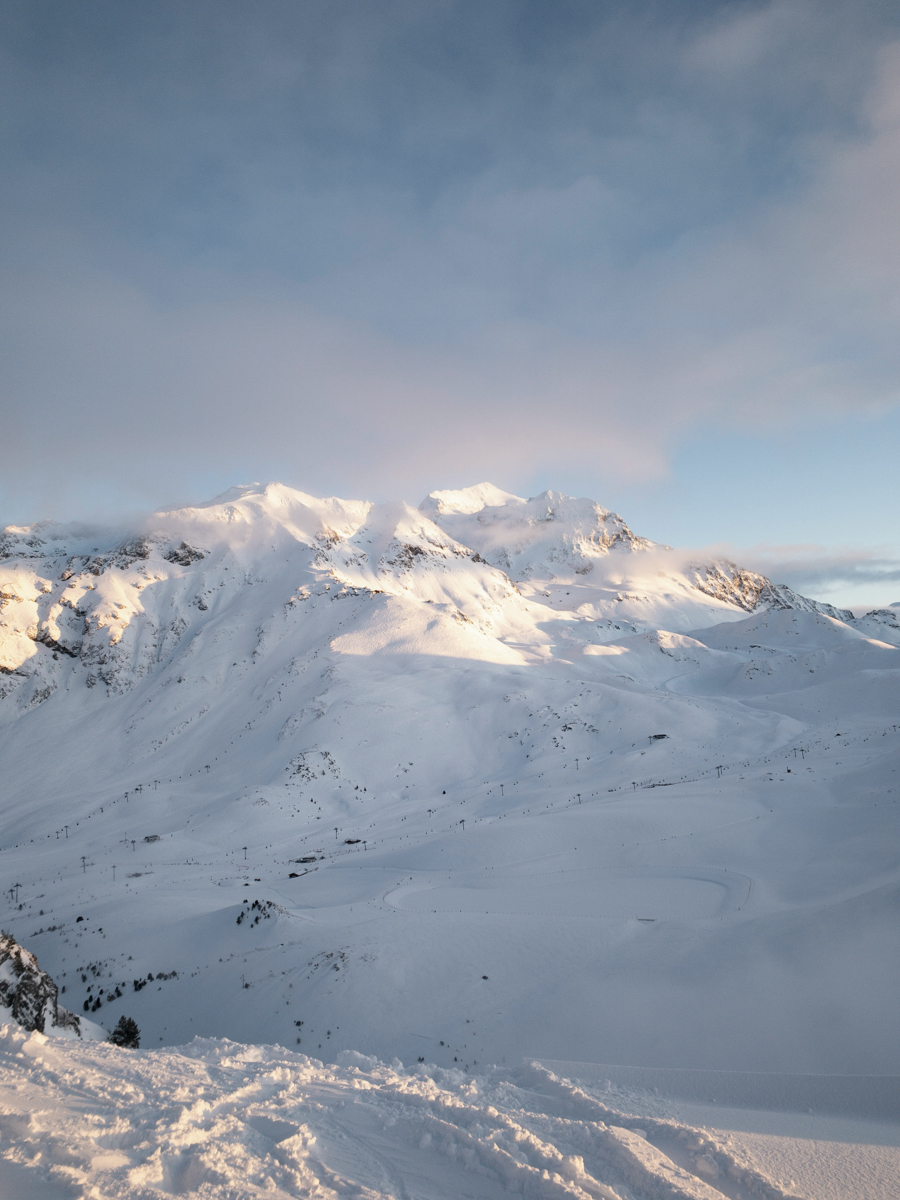 Popular with novices and pros, Les Arcs in the Tarentaise Valley is one of the most famous ski resorts in France.

This is a whopping big complex within the Paradiski ski area, which covers 425 km of pistes. Les Arcs alone has 210 km worth of ski slopes. There are more than enough runs to keep beginners at bay while advanced skiers and boarders can take a day trip to neighbouring La Plagne.

Les Arcs has a good selection of ski schools, nursery slopes, and blue runs. However, experienced skiers can tackle the black runs of the  Glacier du Varet and the e Grand Col off-piste zone.

Accommodation across Arc 1800 and Arc 1950 spans chalets and apartments, with the former offering the best selection of fondue restaurants and bars.

With maximum elevations reaching 3,226 metres, Les Arcs is one of the highest places to ski in France. 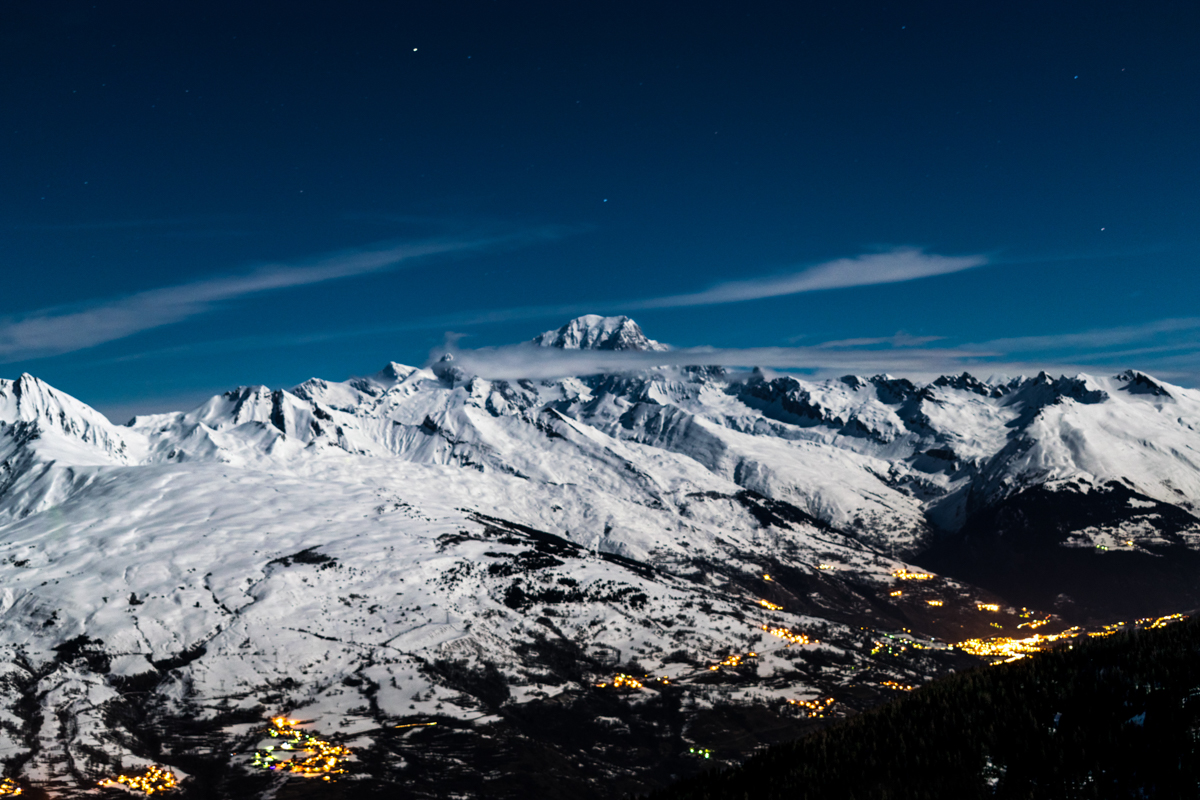 Twinned with Les Arcs, La Plagne is another resort within the Paradiski ski area and constitutes one of the largest linked ski areas in France.

With an inherent family-friendly atmosphere, La Plagne is one of the best places to ski in France with kids or beginners.

Accommodation is heavily composed of ski-in/ski-out lodges while nightlife is laid-back. La Plagne is also one of the cheapest places to ski in France. 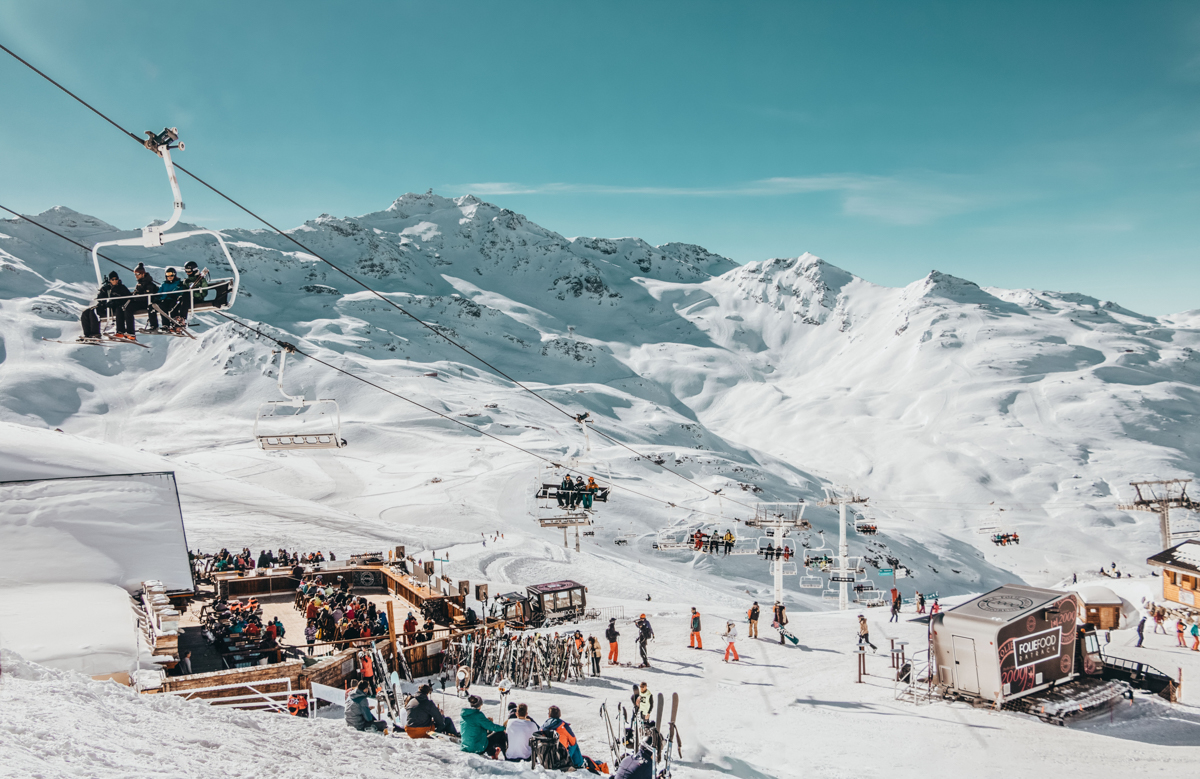 Val Thorens claims the title of one of the highest places to ski in France, with the resort itself located at an altitude of 2,300 metres.

Considering its elevation, Val Thorens provides excellent conditions year after year with the season starting as early as November and providing one of the best places to visit in Europe in December for skiing.

In general, Val Thorens is associated with intermediate and advanced runs. However, there is still a decent supply of gentle slopes where beginners and kids can hone their skills. Besides, the pristine snow results in safer conditions.

Val Thorens is a part of the Three Valleys (Les 3 Vallées) area; the world’s largest alpine ski domain. Therefore, purchasing a full lift pass grants access to 600 km worth of pistes. However, the resort is pretty pricey with day passes costing €72 ($70) or a week-long pass coming in at €288 ($283).

Due to its high location, much of the accommodation in Val Thorens is ski-in ski-out. 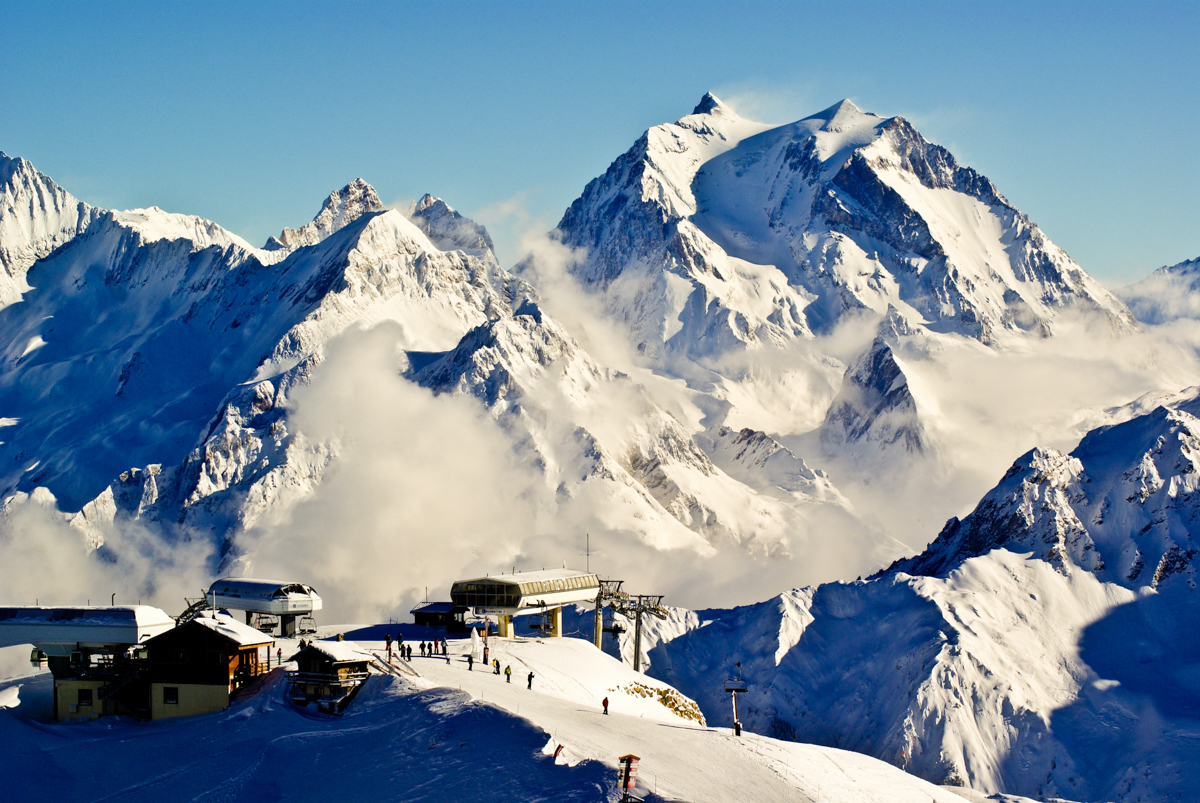 Best places to ski in France.

Another member of the Three Valleys ski area, Courchevel is one of the most luxurious ski resorts in France. Michelin-starred restaurants fill the five villages of Courchevel while the accommodation scene is particularly posh.

Pistes are groomed to perfection to provide a smooth experience across all levels of ability. Courchevel 1850 and Courchevel Moriond 1650 cater best to those just starting out while the wriggly slopes and black runs of La Loze and La Tania will appease the experienced.

As with Val Thorens, you have the option to explore the wider 600 km worth of pistes as per the Three Valleys area.

As it’s a pricey ski destination, Courchevel is one of the best places to ski in France if you’re not constrained by budget. 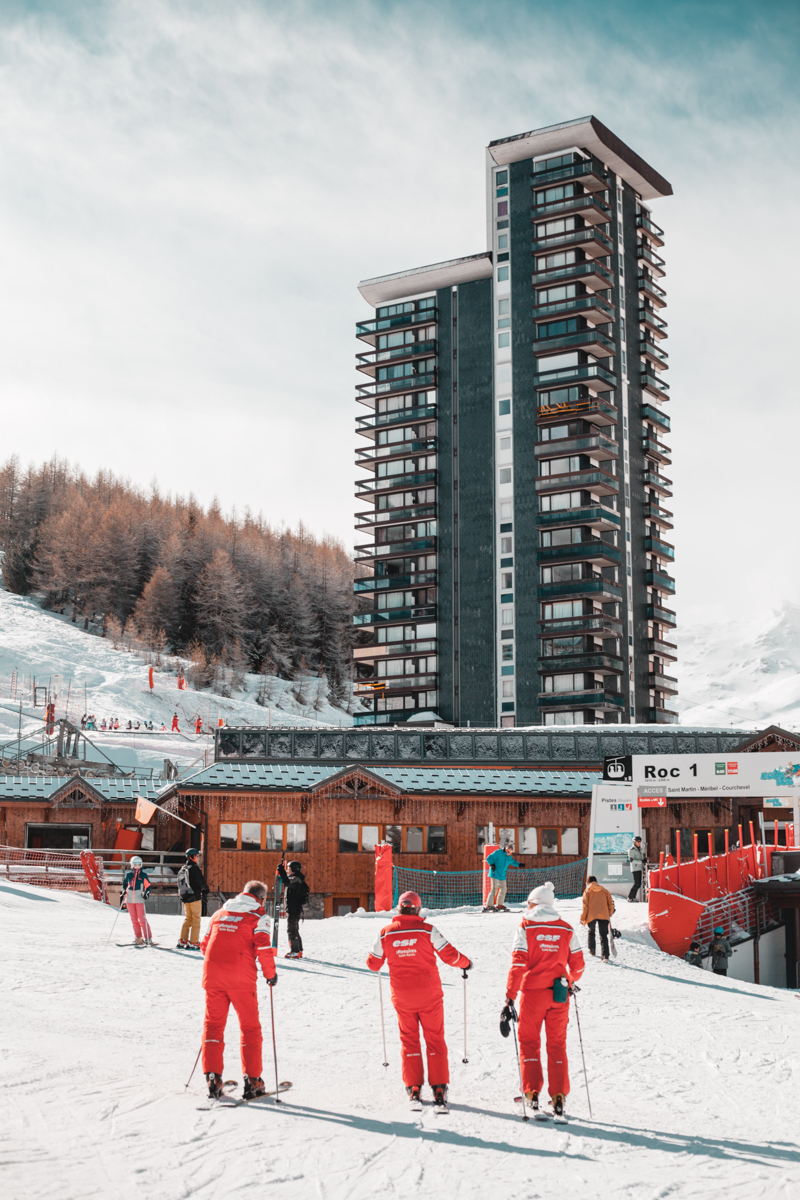 Although it sits within the prestigious Three Valleys ski area, Les Menuires flies beneath the radar and works out as one of the cheapest places to ski in France.

Les Menuires was created in the 1960s with the architecture of the resort channelling the 70’s and modernist styles. As a purpose-built resort, the accommodation works out cheaper yet you’ll have access to superior pistes.

Furthermore, although it’s not the prettiest resort, the friendly atmosphere lends itself to families while the mellow après vibe makes it easy to decompress in the evening without the guarantee of a thumping headache the next day.

La Croisette marks the epicentre, from where you can access what many say are the best intermediate runs in Three Valleys. Originally a red, the Jeruseulm run has been downgraded to a blue where you can safely pick up speed.

Head to the south-facing sector of La Masse for off-piste adventures and steeper conditions.

One noticeable bonus of Les Menuires is that the slopes receive excellent sunshine! 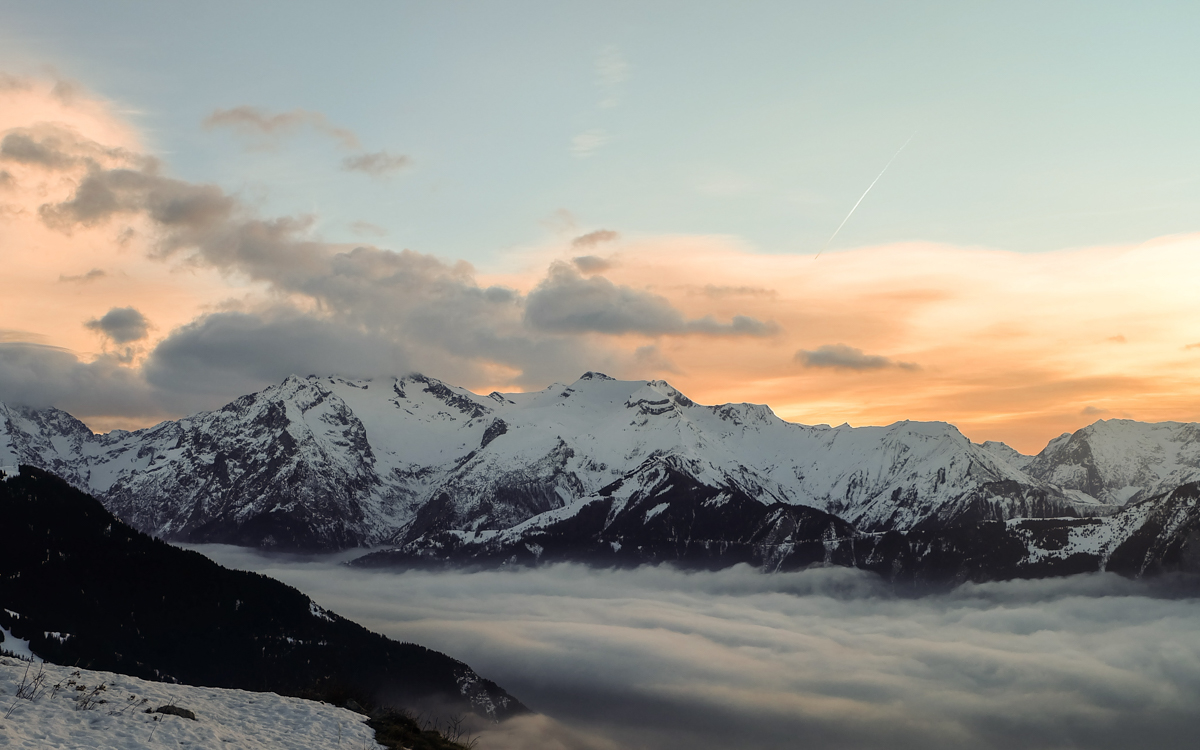 Located in the Grand Domaine ski area, Alpe d’Huez is one of the best places to ski in France for mixed groups. Around 50% of the runs are rated red but there is still plenty of variety for novices eager to stick to green and blues.

Clocking in at 16 km, La Sarenne is both the longest groomed run in the world and the longest black slope in Europe.

La Sarenne has enough steep drops to make it accessible to boarders as well as skiers. In addition, pro skiers can explore the freestyle Oz-Vaujany sector following heavy snowfall.

The diverse terrain of Alpe d’Huez makes it popular for first-time skiers with a stellar choice of progression as confidence grows.

Besides being an excellent all-rounder, Alpe d’Huez tops out at 3,330 metres and is therefore one of the highest places to ski in France with reliable snow. 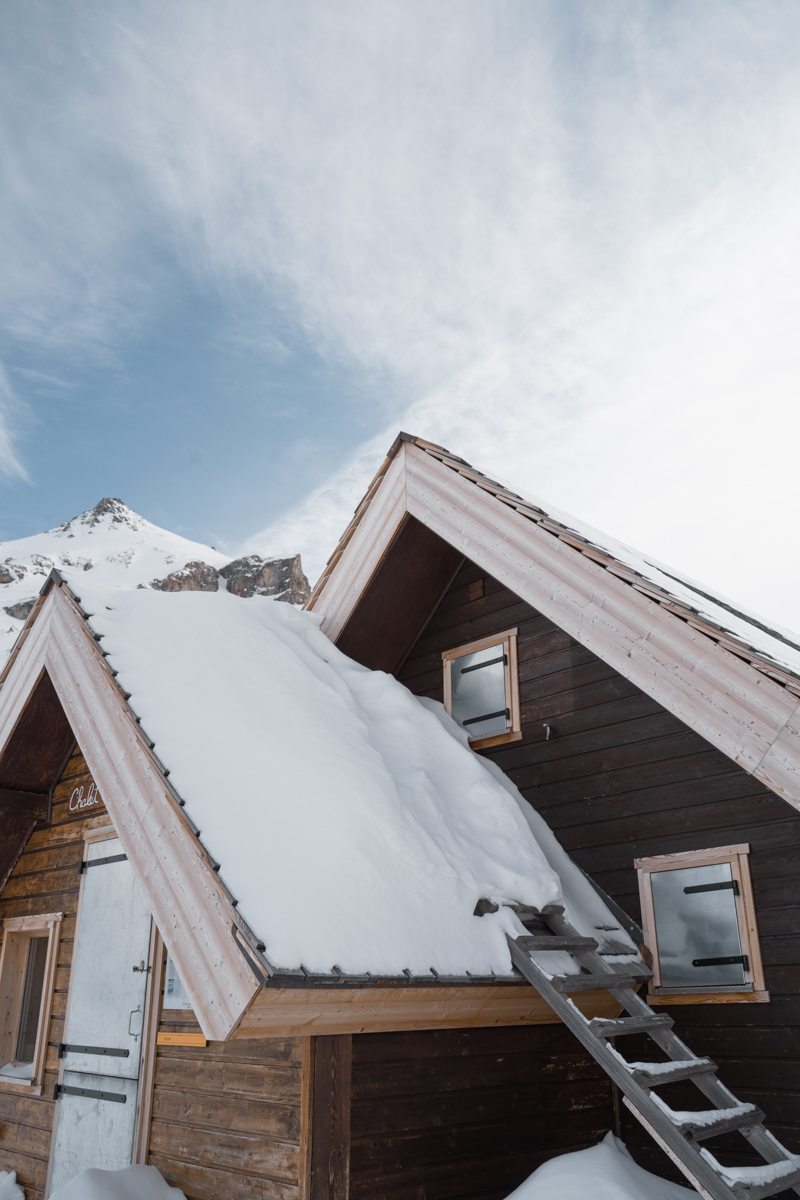 Glamourous Val d’Isere is one of the highest places to ski in France and one of the best resorts for nightlife.

Located in the Savoie region, Val d’Isere forms the Val d’Isere – Tignes ski area (formerly known as Espace Killy). You have the option to purchase a lift pass that covers both or just Val d’Isere.

Within Val d’Isere, you’ll have access to the old Olympic downhill course, La Face de Bellevarde. Although it starts off easy, this swiftly becomes a tough black run. While the village of Val d’Isere connects to lovely nursery slopes, the resort overall is best suited to intermediate or advanced skiers. 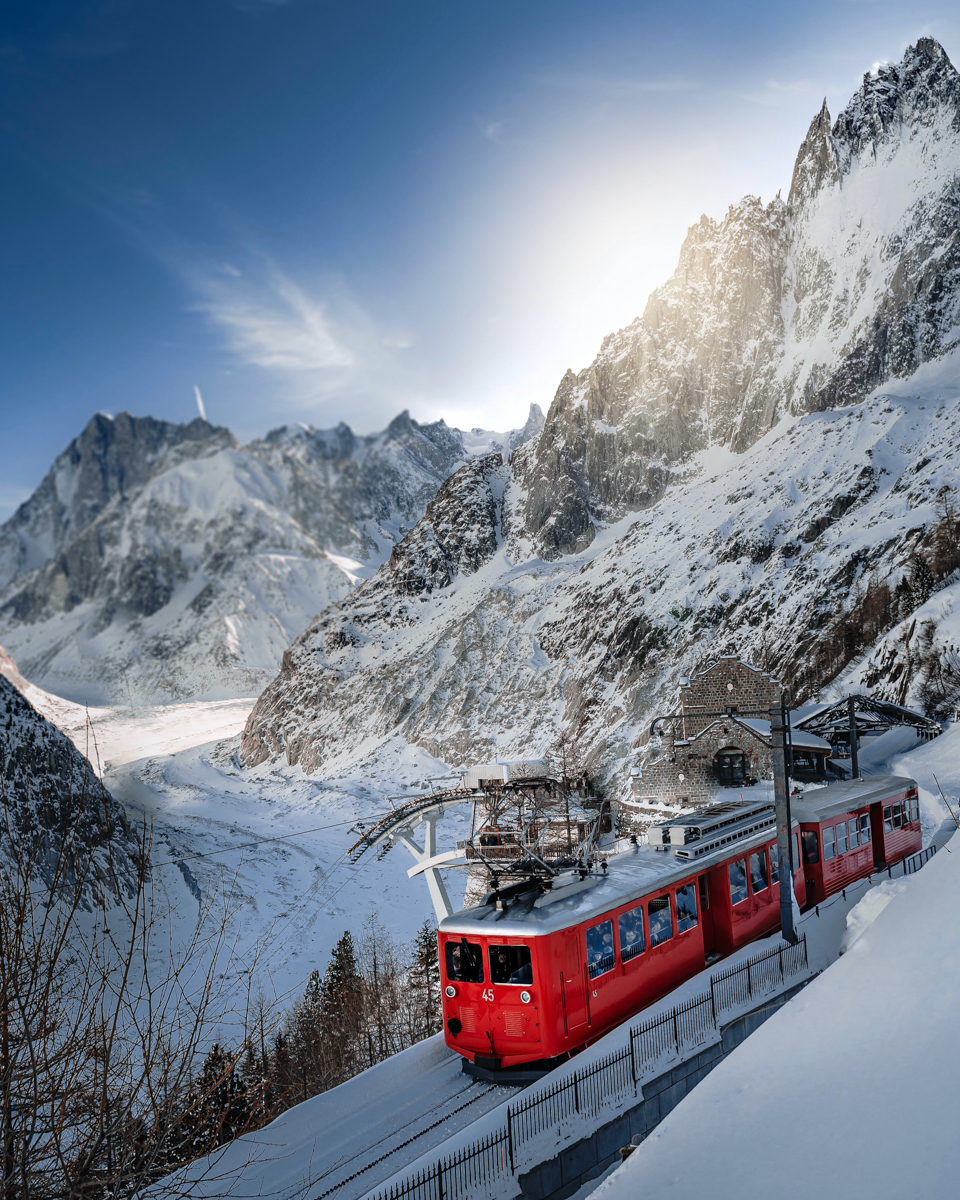 Sited at the base of Western Europe’s highest peak, Mont Blanc, Chamonix is one of the most famous ski destinations in France.

With its vertical descents and extreme off-piste slopes, Chamonix is one of the best ski resorts in France for advanced skiers. Accessible via the world’s highest vertical-ascent cable car, the Vallée Blanche is a typical pick for courageous skiers and boarders.

That being said, there is still potential for novices and intermediate skiers in Chamonix. Central Chamonix links to beginner-friendly areas such as La Vormaine in Le Tour. As a premier resort, all runs are carefully maintained and groomed to provide optimum conditions.

Teeming with excellent restaurants, bars, and shops, the town itself is a great choice if you are travelling with non-skiers. 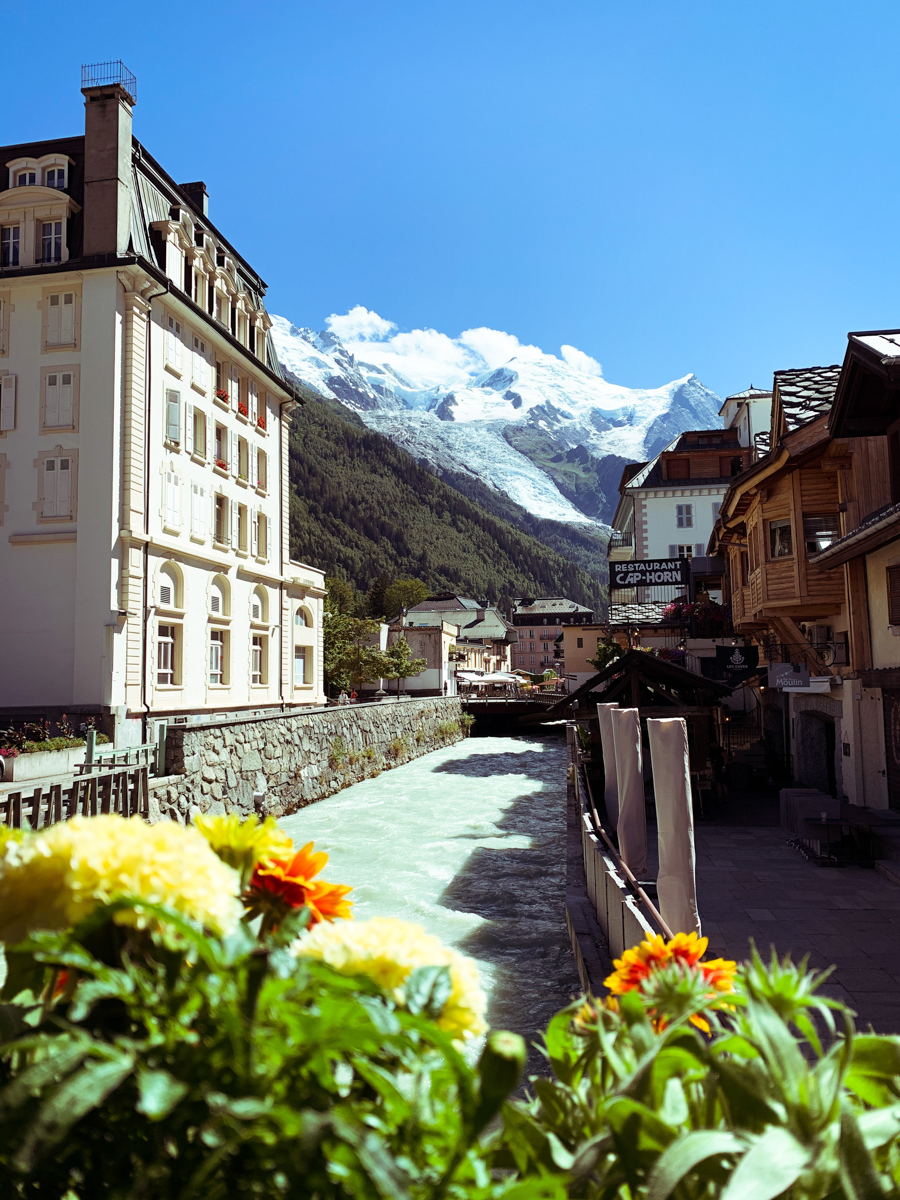 A final pick from the Three Valleys ski area, Méribel is one of the most family-friendly France ski resorts. Nestled among the forested valley of Les Allues, it’s also one of the prettiest.

First-time skiers should make a beeline for the Altiport sector where pistes are wide and gently sloped. Experienced skiers and boarders will enjoy the reds of the Plattieres-Vallon sector and the off-piste potential of Mont du Vallon. Due to the network of ski lifts, it’s perfectly possible to hop across to Courchevel and Val Thorens for a day.

Méribel has an excellent range of accommodations to choose from while the dining and après-ski scene is particularly appealing. It’s lively yet low-key, with all the charm of a quintessential alpine village – the ultimate all-rounder ski resort in France. 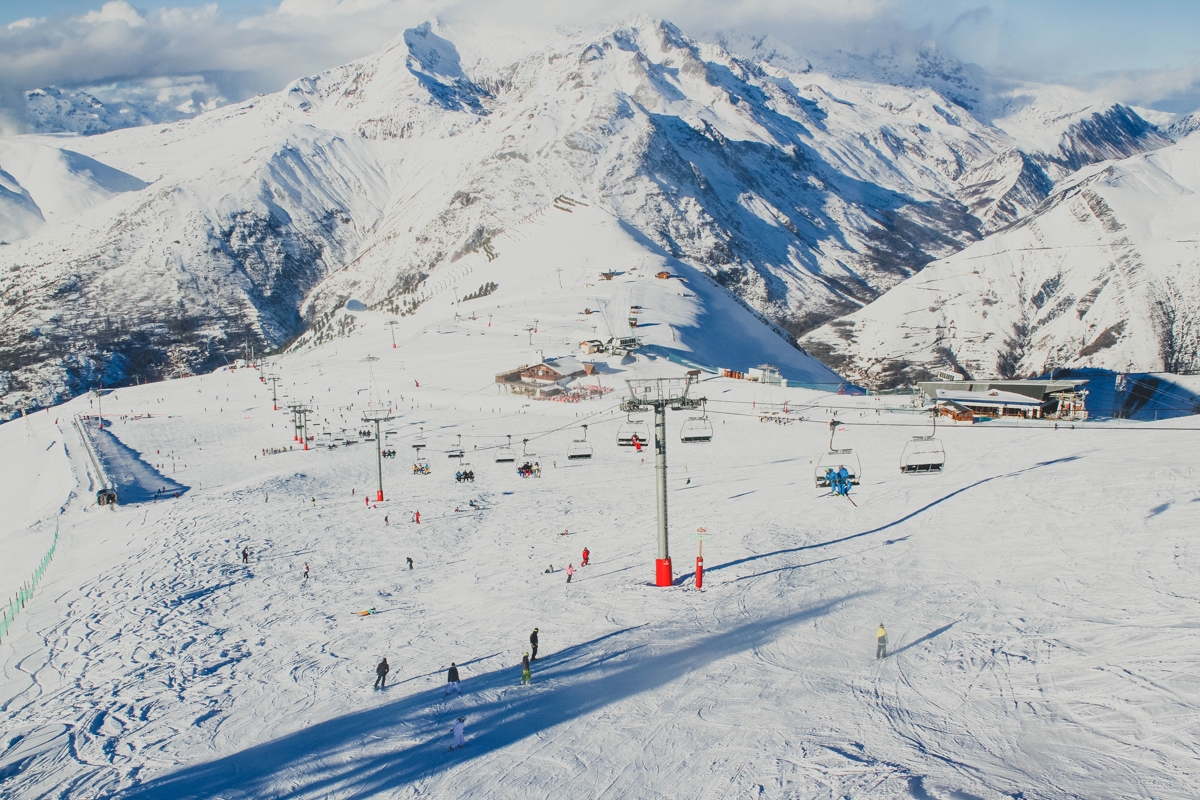 Signing off with one of the cheapest places to ski in France, Tignes is ideal if you’re skiing on a budget.

In fact, Tignes is the second half of the Val d’Isere – Tignes ski area. However, the prices are far kinder to the wallet and it’s great for inexpensive après.

Tignes is composed of diverse terrain with sufficient slopes for less-experienced through to expert skiers. There’s not as huge variety for complete beginners but second-timers and those looking to improve will appreciate the offering – particularly as the slopes work well to mixed ability groups eager to hit the slopes together.

The Genepy run, on the Grande Motte glacier, is easily accessible via chairlift and grants incredible views on the gentle run down to Val Claret.