Before I moved to Pyeongtaek, I had never even heard of it. When I googled it, it seemed like no one else had either. There was so little information on the city, I had no idea what we were in for. I found out shortly after arriving in Korea that one of the reasons it’s so hard to find any information using Google or Yahoo, is because Koreans use different search engines and obviously, it’s all in Korean.

In any case, due mostly to the lack of information available, Luke and I had no idea what our new home base was going to be like. Would it be a big city or a small town? Would there be a grocery store? Public transportation? Access to Seoul and other parts of the country? It was a complete mystery. Our main assumption was that it was going to be small; maybe there would be a strip of shops and restaurants, but that if we wanted anything major, we’d probably have to trek into Seoul.

We were very wrong.

Pyeongtaek is a decent sized city, about an hour south of Seoul and in close proximity to several military bases like Osan AB and Camp Humphreys. This meant that we had access to a lot of English-speakers whenever we missed home as well as several restaurants to find American-style food when we missed that, too.

But it’s also far enough away from everything that we could really immerse ourselves in Korean culture, too.

I’ll never forget that feeling I had as our airport bus pulled into the Pyeongtaek bus terminal. We confirmed with our surly driver that this was in fact our stop and we walked into the terminal to await pick-up from our new boss. The butterflies were raging as I assessed our new home. It was midday, but already the neon lights were shining and the streets were full of people barging past each other in a rush to wherever they were headed.

We spent our first few weekends in Korea getting to know the city. It’s far bigger than we imagined it would be. It felt, at first, like I would never be able to figure out it’s maze-like side streets or get my bearings, but I did.

From the train station, itself loaded with shops and restaurants, there are five streets that branch off, often referred to by other expats as the five fingers. Down each street you’ll find tons of Korean restaurants, coffee shops, dessert cafes and clothing shops (and cat cafes!). There is a huge traditional Korean market (known as a 시장), where you can shop for fresh local produce, local crafts, pigs heads or a pair of flip flops.

Carry on out of the city in any direction and you’ll find yourself amid rural farmland where some of the country’s most famous rice and pears are grown.

I live in a smaller village on the outskirts of the city, where from my apartment, I look out over parks and lush green rice fields.

One of my favorite places in the city is along the river. Like in many Korean cities, the once industrial area around the waterways has been re-vamped. There is a bike path on one side and a walking path on the other. They lead out of town towards the port, along the way turning from drab cityscape to everglade-like views.

When Pyeongtaek feels too small, it’s a quick 50 minute bus ride to Seoul where you literally have everything at your disposal. The buses run every 20 minutes on the weekends, so even if you don’t book in advance, you never have to wait long to catch the next one. 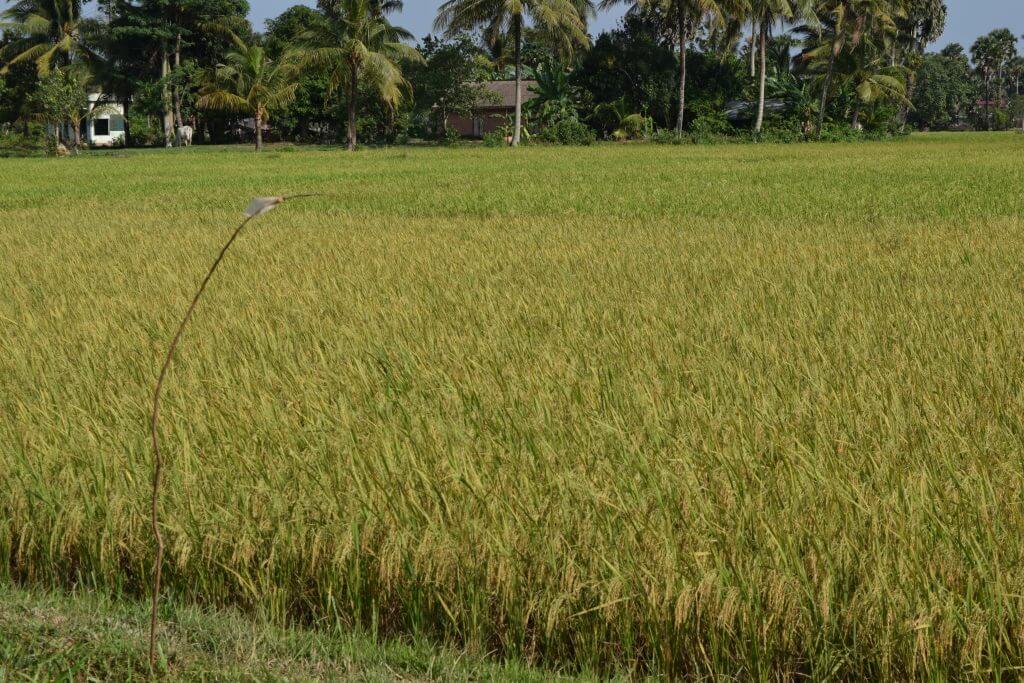 At the end of a long day in Seoul, Luke and I get to head back to Pyeongtaek where the evenings are utterly silent; where local produce is so affordable that I often eat more fruit and vegetables than anything else; where for the most part, people are friendly and curious and want to get to know you.

Back when we first got offered our job in Pyeongtaek, some of the only information we could find on the city was it’s proximity to Camp Humphrey’s, Korea’s largest US Military base. Now don’t get me wrong, I love and respect my country and the people who serve it, but I don’t want to live around it, especially in a foreign country where I’m not entirely sure our presence is wanted.

What I mean is, it worried me that Koreans would assume that because we were in Pyeongtaek, that we were in the military. Well, sometimes they do. Sometimes the bus driver thinks when I get on the bus going in the opposite direction to the base, that I’m on the wrong bus. Besides that, you hardly know they’re here. Can we spot them a mile away with their army backpacks and tree trunk arms? Sure, but it’s not affecting my life in Pyeongtaek or Korea in any way.  If it’s something you’re really looking to avoid, then steer clear of the area around Camp Humphrey’s, Anjeong-ri.

Overall, I’m quite happy with our choice to live here. I like that the shops and restaurants in our neighborhood know us and remember when we revisit them. I like how friendly everyone is too. Plenty of people still stare, but it’s sort of something that we’ve gotten used to. We giggle to ourselves and smile at their confused expressions. I’m pleased that we ended up somewhere like Pyeongtaek – not too big, but just big enough.

Thank you!!! I am looking at taking a Job there and needed this post so bad. Thanks for sharing!

Hi I just moved to pyeongtaek right near where starfield mall is located. Most friends live In Seoul so I find myself being bored a lot. I’m getting tired of going to starfield everyday haha. Is there any online community to meet up with expats living around pyeongtaek? Would appreciate any feedback!

There used to be a language exchange group on Meetup that I joined and met a ton of great people - that's how I met most of my friends in Pyeongtaek. There's also nice community of expats in Suwon that's only 30 min away by bus/train. There are a surprising number of hagwons and teachers at public schools around Pyeongtaek, you just have to find where they hang out. There are also a fair few Facebook groups for expats/foreigners in Pyeongtaek which will probably be a good place to see if anyone wants to meet up for a drink/hang out somewhere.

Hey there! What part of Pyongtaek did you feel was best? A place with less soldiers the better for us all! Would love your advice!

Hey Tom! We lived in Jinsa-ri which I really loved, the school we taught at was in Hapjeong-dong (I think?) which was also a nice place. Hope that helps!