If it’s possible, this month has gone even faster than the first. We’ve spent more time in fewer places, slowing our travel pace slightly, but still packing our days full.

Stats
Countries Visited: 2
Long Distance Buses Taken: 9
Number of consecutive days where we consumed at least one unit of alcohol: 61 (and counting) 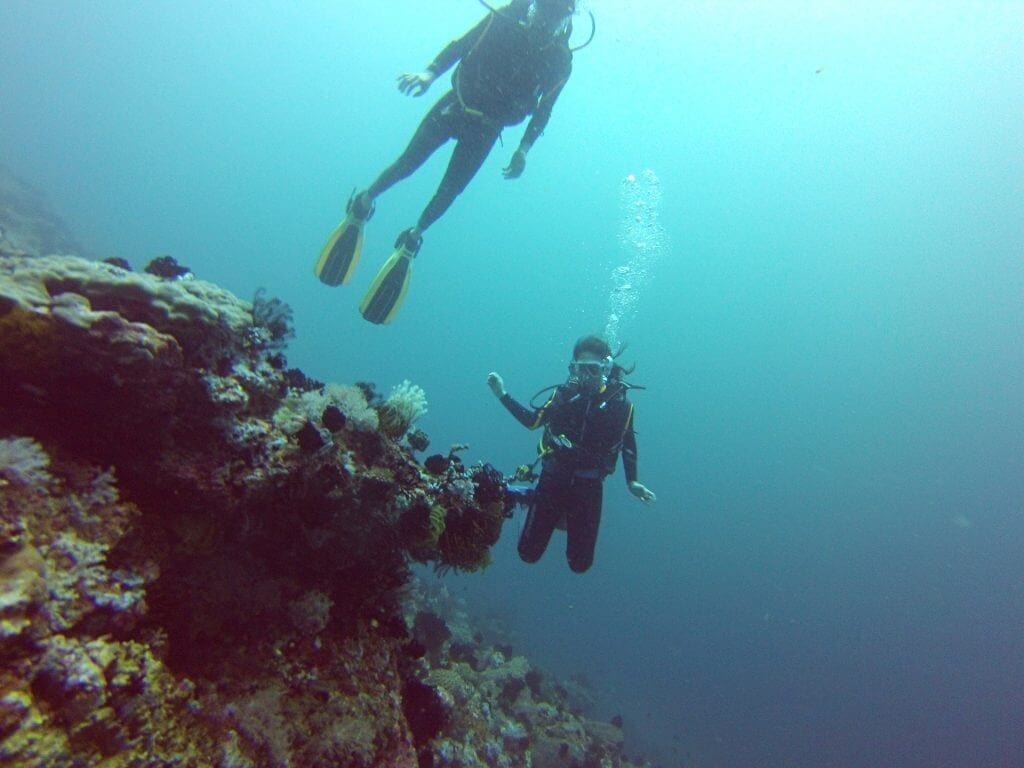 The Philippines is an… interesting place.

To be fair to the country, we only saw a tiny part of it. Manila, as many people said to us before our arrival, isn’t somewhere you want to spend much time. It’s the first (and only, so far) place where I have wondered if I was safe. Security guards carried machine guns and poverty was everywhere.

It was completely different to the island we went to less than three hours from there,  Puerto Galera.

I knew it wasn’t a beach area or much of a tourist area at all. It’s all about the diving in the small village of Sabang in Puerto Galera, and not much else.

It was exactly what we’d hoped it would be: incredible instruction, crystal clear water, bright and colorful coral and so many fish. I spent hours pouring over the encyclopedia of sea life after each dive.

And it was cheap. After becoming SSI certified we dove for less than 20 USD each for the remainder of our time there.

We grew our confidence underwater, we saw turtles, swam through shipwrecks, learned the difference between coral and sea anemone.

It was a perfect eight days.  We dove all day and drank happy hour beers as the sun was setting over the harbor. We hardly felt the heat because we were swimming during the height of the sun and relaxing in the dive shop for the rest of the day.

Philipino food left a lot to be desired. It was either greasy or overpriced. The local dishes were good value but left me feeling heavy and not quite full. That left expensive pizzas, day-old fish or bad burgers. I also never quite felt welcomed. Locals weren’t very friendly in and around Sabang nor were they all that nice in Manila.

I want to give the Philippines another chance. The diving was insanely good. I only visited two of some 7,000 islands. There is so much more to explore, so many other locals, other food and other beaches. All I’m sure are better than where we were. But for now, I’ll take my diving elsewhere. 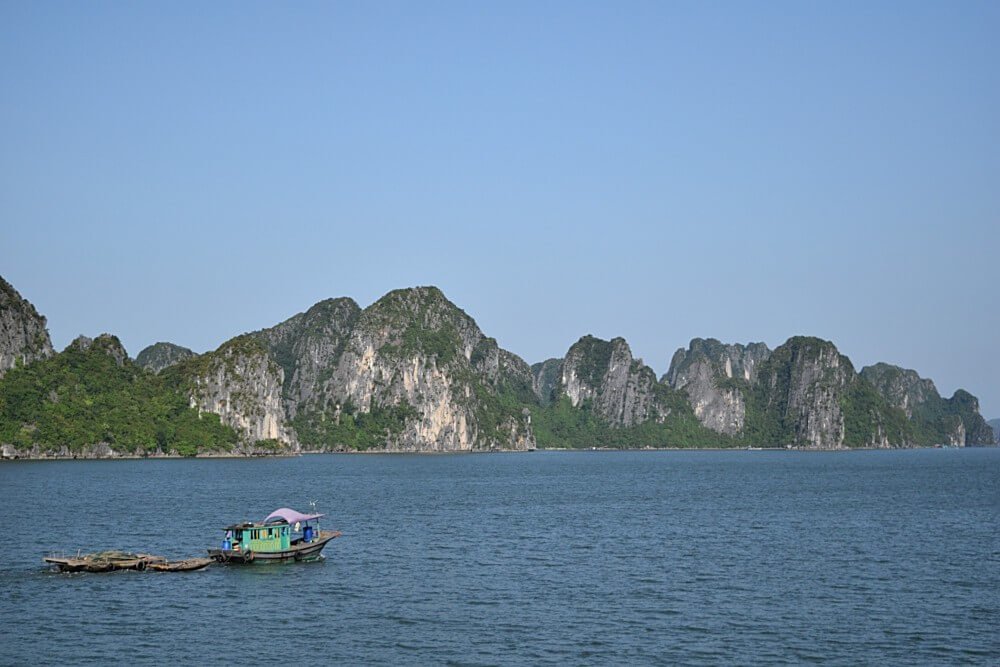 I’m in love. The iced coffee that puts hairs on your chest, the smiley locals, the soups that I can’t stop eating no matter how hot it is.

It’s so damn hot here. The news said the other day that Vietnam and Cambodia are experiencing the hottest May on record.

I’m literally melting every time I walk out of my room. I’ve become addicted to homemade lemonade and orange soda because all I want are cold, sugary drinks.

We arrived in Hanoi and almost immediately headed to Sapa.

When we got off the bus we met an amazing woman named Bau (as in bow your head).

She’s from a local farming village where she and her husband and three small children live entirely off the land. We drank homemade rice wine all night, hiked through the rice fields and learned a lot about the hill tribe people of Sapa. It has been one of my favorite parts of the entire trip so far.

Halong Bay was completely different. It was utter luxury.

We sailed around limestone pillars, slept on a private beach in little bungalows, kayaked through the bay and ate so much fresh fish.

I sat on the beach on our last day wondering how the hell we ended up in this piece of paradise.

Then it was onto Tam Coc, Hue and Hoi An. More boat rides, more soup filled with lime and coriander. We visited the former DMZ while we were in Hue and learned a bit more about the impact of the Vietnam war from their perspective.

Hoi An was somewhere we’d been talking about going since we first planned our trip.

The tailoring capital of Vietnam, you can walk into any of the hundreds of shops that line the streets and have them make you anything: suits, dresses, shoes, coats, leather bags. We splurged a bit, ate a lot and laid by the beach once we’d emptied our wallets.

I feel like we’re taking our time, slowly working down the coast, but we’ve still done so much. It feels like months have past instead of just one. It also seems insane that we only have 10 days left on our Vietnamese visa.

When we entered the country, thirty days seemed like more than enough time. Now it seems like we’ll likely have to cut out a few things that we wanted to do. I don’t regret moving slowly and spending the time we did in each place, I simply wish we had more of it! 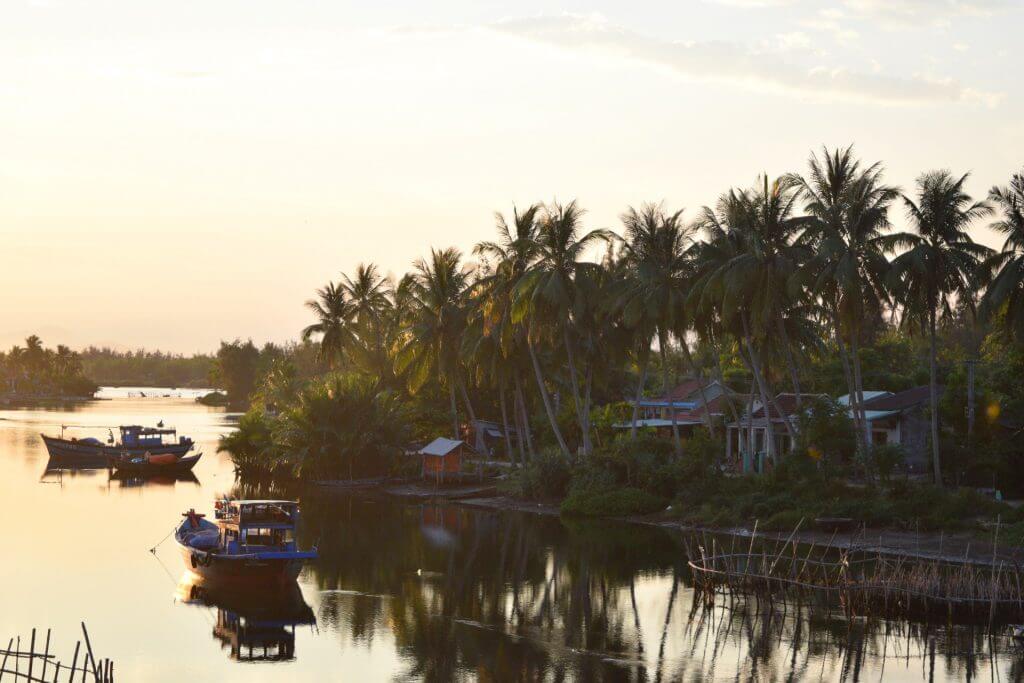 This is the first trip that Luke and I have taken that has included more than one country.

It’s the first time we’ve had to deal with currency conversions and changing over money between each place. What we have ended up doing is changing whatever we have left in that country into the currency of the next country at that airport.

It’s not the most economical, but it’s been the most convenient.

We thought we would do the same between The Philippines and Vietnam, but when we got to the airport in Manila, there wasn’t a currency exchange in sight. It ended up really costing us.

When we arrived in Vietnam, instead of paying 45 USD for our visa, we were forced to pay in Philipino Pesos at almost double the rate. It was a hard lesson to learn, but at least now we know never to go to the airport without the right currency!

I think the constant go-go-go is starting to catch up with us.

The long bus journeys on bumpy roads has meant we’re not always getting very much sleep.

We’re packing our days full of walking, cycling, swimming, hiking, all in temperatures well above 30C. We’re waking up early and going to bed late. While we were in Hue we spent a morning sleeping in.

We relaxed in our hostel for most of the morning in the air conditioning doing our best to not feel guilty about it.

We went out to eat our meals and walk along the river in the evening, but for the most part we did absolutely nothing. When we got into bed that night we both agreed it was the best thing we could have done and vowed to work a few more days like that into our trip as we go forward.

We have 10 more days in Vietnam.

We’ve got a few beach towns to hit along the coast before we go to Saigon. I’m excited to check out the food scene there, explore some more museums and historical sites in the Southern part of the country.

Then it’s onto Cambodia!

We’ll take a bus from Saigon straight to Phnom Penh. We’re not sure exactly how many days we’ll spend in the country, but have roughly planned to be there for 2-3 weeks. I’m really looking forward to it, but will definitely be sad to leave Vietnam behind.