Thailand is a huge country and you could easily spend a whole month exploring here. This is my two-week Northern Thailand itinerary.

Two weeks is a great amount of time to explore Northern Thailand as long as you have the time.

While Thailand may be known for its beaches, the jungles and smaller northern cities are definitely worth your time, too. Not to mention the amazing food on offer in this part of the country.

If you’re curious about cost, be sure to check out my post about how much it costs to travel around Thailand.

Thailand is a big country, one that we struggled to plan out properly. We didn’t really know what we wanted to see and we hadn’t done much research before arriving.

We knew we wanted to go North, but we weren’t really sure where to stop or how to get around cheaply. There’s almost TOO MUCH information out there about Thailand. We used this Lonely Planet guidebook

, but it gives such a small amount of information about Thailand, that we felt a little bit lost.

We only had 15-days to plan, travel, and see all we wanted to see before we wanted to be crossing into Laos. Here’s how we ended up spending those two weeks in Northern Thailand.

Two weeks is not enough time to see all of the amazing places in Thailand, but it is enough time to thoroughly get to know at least one region. For me, with only two weeks, my priority was the central and northern areas of the country.

We arrived in Bangkok on a bus from Cambodia just as dusk was settling. We were only a block away from Koh San Road and despite our initial thoughts about wanting to stay anywhere but there, we went in search of a nearby cheap place to rest our heads.

About two blocks away we found a quiet little guesthouse with rooms for 300 Baht (about $8.50). The woman who owned it was really nice and the rooms were clean. It was a motel style with fast wifi and a big courtyard with seats to sit with a beer in the sun.

We didn’t do much these two days except try and figure out what to do for the next two weeks. We did a lot of research, went to see Terminator Genisys in theaters, and ate a lot of Tom Yum.

There are so many great places to eat around Bangkok, it’s impossible not to find some seriously great food wherever you turn in this city,

On the morning of the third day, we caught the bus from Mo Chit Northern Bus Station to Sukhothai. It took about 6 hours, but the bus was air conditioned and we got an onboard snack and drink. I think bus travel in Thailand is excellent value for money. 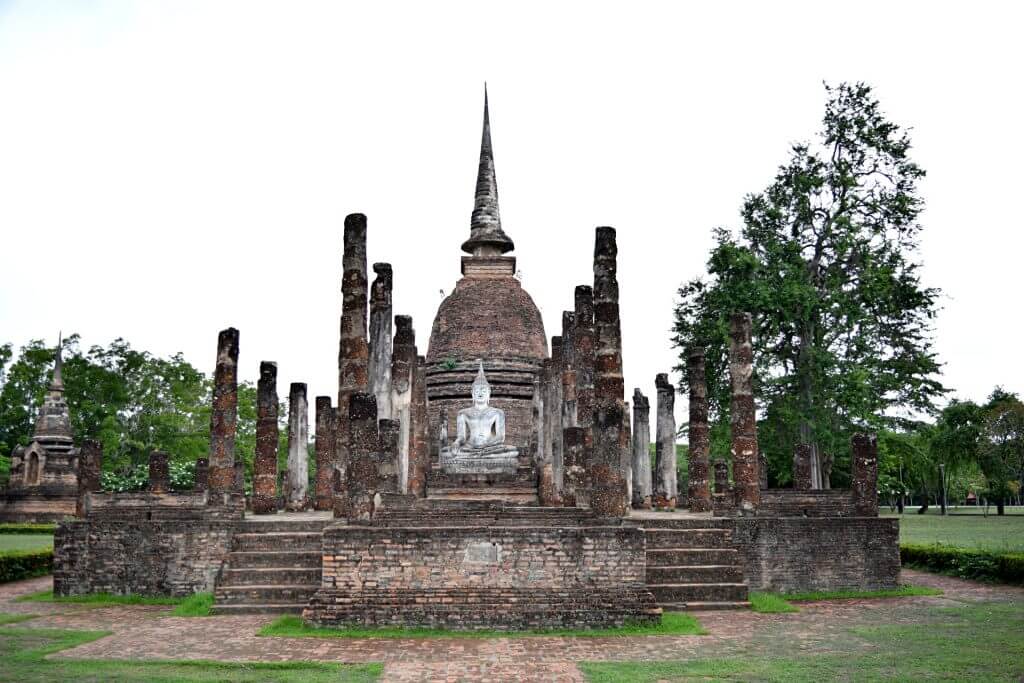 Sukhothai was one of the best stops we made in Thailand. It’s full of history and relatively easy to explore. The hostel area in Sukhothai has tons of options. We stayed in a small hostel in the “new city”. There was a great night market nearby, plenty of restaurants, and a big 7-11.

When you get off the bus in Sukhothai, like many places in Asia, people will show up from the hotels to try to get you to stay in their guest house. There are more than a dozen budget options in Sukhothai to check out.

I usually did not pre-book my accommodation when traveling in northern Thailand. It was always so easy to find a cheap guest house as soon as I arrived and it was always cheaper to do this than to pre-book.

However, if you aren’t concerned about budget and would rather make sure that you get a really nice place to stay, then definitely check out the options for Sukhothai on Booking.com.

Booking.com is the website I always use for booking around the world. I think they offer the best deals and you can compare hotels based on location. It’s also nice to see people’s reviews and photos of the hotel before booking.

The great thing about pre-planning your northern Thailand itinerary is that you can find affordable yet luxurious places to stay and know exactly where you are going to stay before arriving.

What to do in Sukhothai

We spent one whole day here to see the main attraction, the “old city.”

We caught a songthaew (shared taxi) that morning which was really cheap and leaves every half an hour or so. When we got to the historical park we rented bicycles and bought our park tickets.

From there we cycled around for most of the day. There are restaurants and shops scattered around the park entrance so you can get food, snacks, and water throughout the day quite easily.

The ruins are incredibly well preserved and cycling is a really fun way to explore them. Start at the far end of the park if you want to avoid the tour buses that work there way from the entrance inward.

You could definitely split this into two days if you don’t want to try and squeeze it all in at once. There’s a lot to see. We only spent one whole day at the park before moving further North again and were exhausted after that single day of touring. 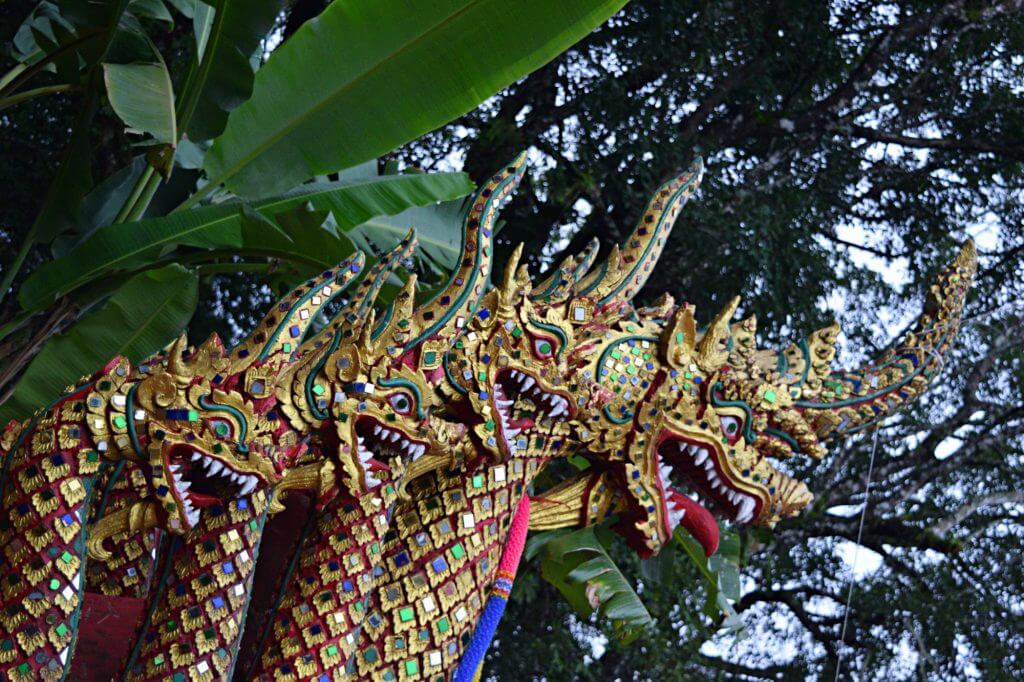 No northern thailand itinerary is complete without a few days in Chiang Mai.

Chiang Mai is the center of this region. You’ll need to come here if you want to get out to other areas by bus.

That being said, there’s enough to do in this city in its own right and should absolutely be added to your northern Thailand itinerary.

We spent a few days in Chiang Mai eating all kinds of delights and exploring the local temples, of which there are many.

It’s a really easy place to travel by foot and each evening we sampled a different night market. I got most of my information on what to do and where to eat from Paper Planes Blog.

Chiang Mai remains one of the best foodie cities we visited in all of South East Asia (I know, BIG claim). 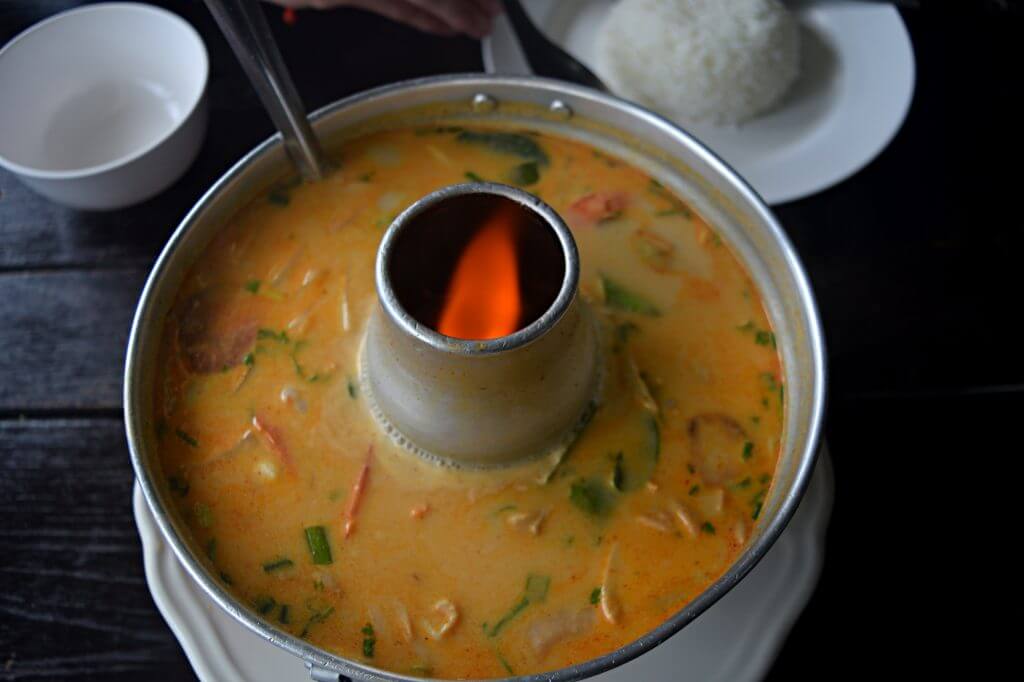 It’s funny actually. If you had asked me if I liked Pai just after I left I probably would have bitten your head off.

It was so full of 19-year-old backpackers. It was packed with newbie motorbike riders, organic cafes, and over-priced bars. When we first got there, I actually regretted putting this on my northern Thailand itinerary at all.

But by the time we left, and now that I can look back on it, I can be a little more diplomatic.

Pai is a beautiful place.

We stayed in our own private bungalow with a little balcony right along the river for less than $8 a night (280 Baht). We were able to barter down with the owner because we said we would stay for three nights rather than just one.

If you want to prebook a place to stay in Pai before your trip, check out the Pai listings on Booking.com here. There are over 250 guesthouses and hotels in this jungle town.

One of the best things about Pai, besides the silent nights, the sky full of stars, the relaxing river, and the cute shops is the food.

Every night there’s a market with tons of stalls selling cheap and delicious food and drinks. We had fresh juice from a local shop every morning and walked for hours through the town and along jungle-esque paths.

There were a few cool bars and cheap restaurants with plenty of Thai favorites to dine on.

We only stayed this long in Pai because we got sick.

After being on the road for almost four months at this point in the trip, we were absolutely exhausted.

Pai came at the perfect time. It was the best place I could have imagined for recovering, for delicious soups, healthy juices, and perfectly silent nights for catching up on sleep.

If you’re looking for a place to slow down and enjoy mother nature at it’s purest, you’ll probably want to add Pai to your northern thailand itinerary. 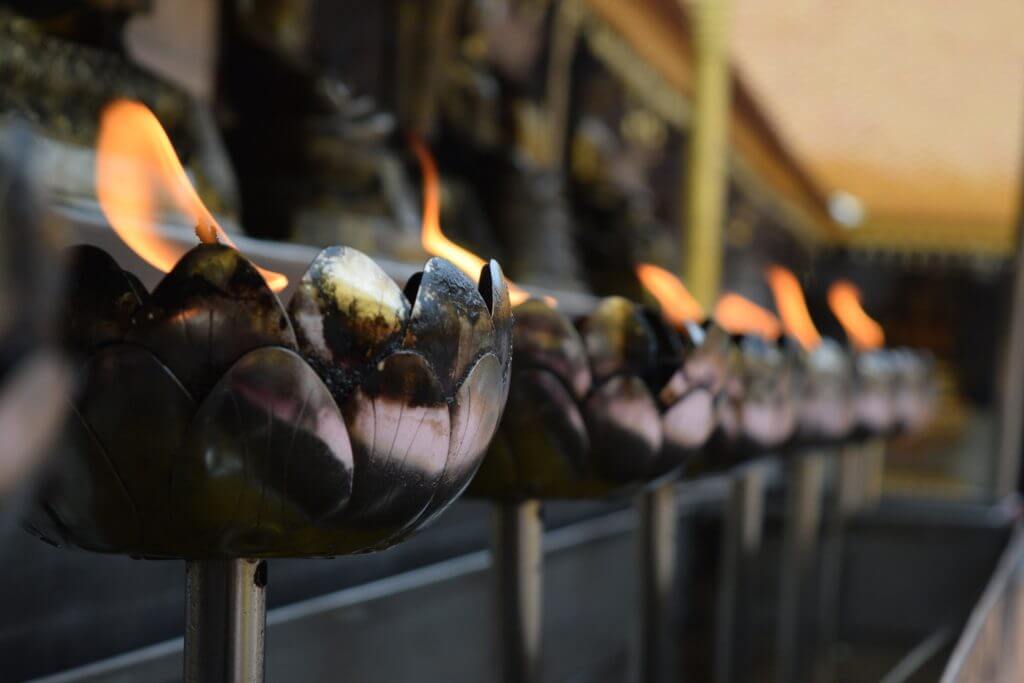 We headed back to Chiang Mai to explore a temple a little further outside the city called Doi Suthep. Everything we read about Chiang Mai recommended a visit to this holy place. A few tuk-tuk rides later and we were climbing the dragon steps to the entrance.

As with all Thai temples, but this one in particular, be sure to cover up. Women should wear full-length trousers or skirts and cover their arms and chest. 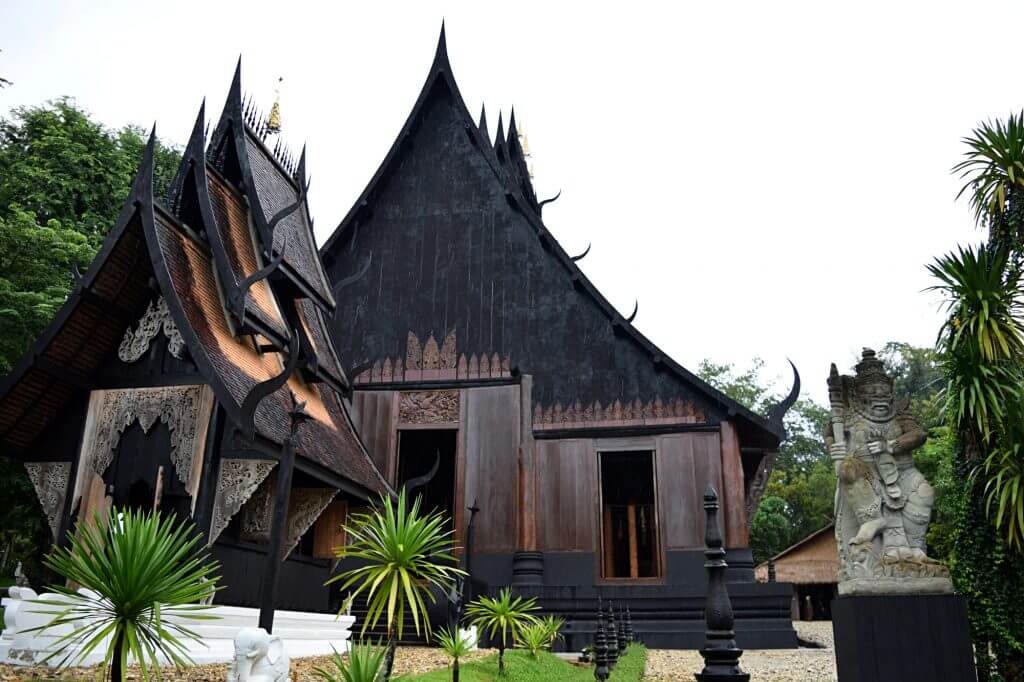 Chiang Rai is a great little city and one I’m so glad we got to explore. It has a few cheap hostels, a top-notch night market, and some of my favorite sights in Northern Thailand.

On our only full day in the city we drank tons of Thai milk tea (oh, how I miss you) and then hired a tuk-tuk for the afternoon. For 350 Baht he took us to the White Temple and the Black House. 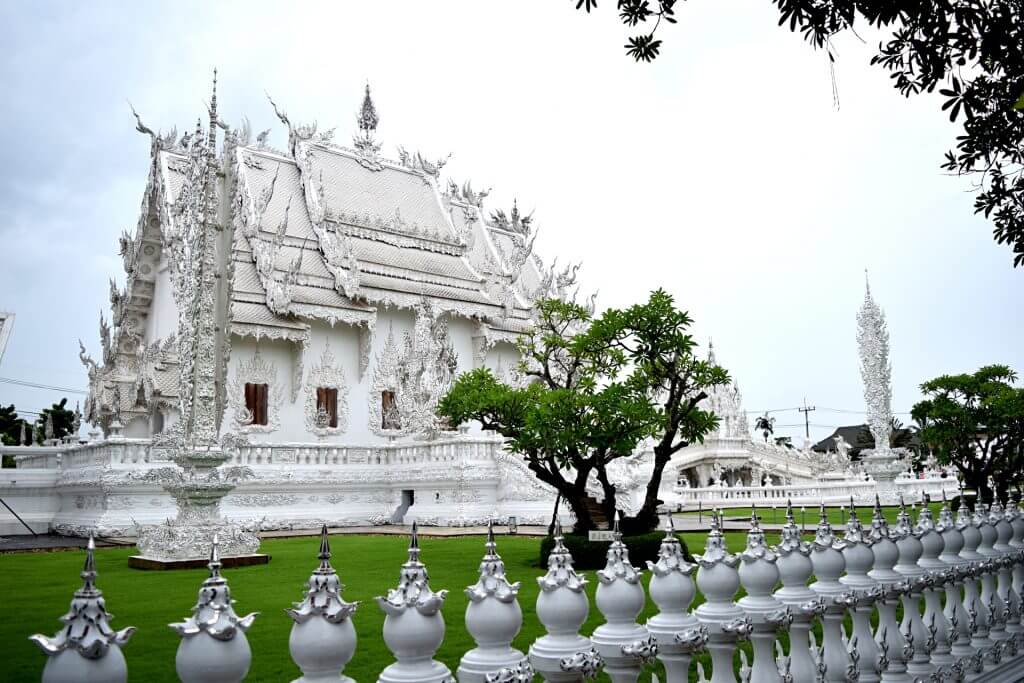 The White Temple is incredible. On a sunny day it’s nearly blinding. The whole structure: the temple, the museum, the surrounding park, is the masterpiece of Thai artist Chalermchai Kositpipat.

If it rains they close the entrance to the temple, so try to go on a dry day otherwise you won’t be able to go inside (which is what happened to us).

The Black House is not just the opposite of the white temple in color. It is one huge art display after another. It’s basically a museum, but not like any museums I’ve ever been to before.

It’s certainly controversial with animal skins and skeletons in different rooms, as well as huge paintings and moss-covered statues. The scale of some of the work is immense and I really enjoyed exploring it.

What Would I Have Changed in My Northern Thailand Itinerary

Where do I start?

Overall, I still enjoyed my time in Northern Thailand. It really is as beautiful as they say it is and the food was nourishing in every sense of the word. There’s simply so much to see it’s hard to know what to pack into your short itinerary. This “mistake” taught us a lot and ended up giving us the kick up the butt that we needed to plan Laos properly.

If you’re planning a future trip to South East Asia, keep your eyes peeled for the possibility of a railway connecting all the countries. How could would that be?

Have you ever been to Northern Thailand? What’s your favorite place? What advice would you give to a first time visitor to the area? Let us know in the comments!

We spent some time in Phayao which is an interesting lakeside town 3hrs south of Chiang Rai. Lampang is good to visit too with the Chicken bowl factory an experience.

Unrelated to this post but I've just come across your blog and...I quite love it! I've been reading the same 5 travel blogs for months and haven't really found new ones that have properly captured my interest, but I'm loving this: the layout, the writing style, the detailed itinerary/budget posts. Spot on, I'm looking forward to reading about Mexico!

Thank you so much for taking the time to comment, Sarah. Your words mean a lot! I hope you'll keep coming back and if you ever have any questions about travel or otherwise, feel free to email me!