We were old pros with a motorbike by the time we made it to Kampot, in Southern Cambodia. We’d been traveling for several months already and Luke felt at ease behind the wheel, or um, handlebars.

Yet again we were navigating dirt roads and trying to figure out if those rice fields were the same one’s we’d passed a half an hour ago or not. No telling how much fuel we had left since even after we filled it up the gauge read empty.

We spent most of the day exploring the famous pepper plantations (I didn’t know they were famous either). When the French colonized the region, they found that Kampot was the perfect climate for growing black and white pepper. It continues to this day and apparently is renowned as one of the best places in the world for it.

It was starting to get dark, so we headed back in what we thought was the direction of the town.

Eventually we rolled back down the main street, past the rotary with the giant durian fruit in the middle. It was pretty dark by then and try as we might, we couldn’t figure out how to turn the headlights on.

We pulled over at one point and flipped every switch, turned every knob, and pushed every button. All we managed to do was beep the horn a few times and open the seat compartment. 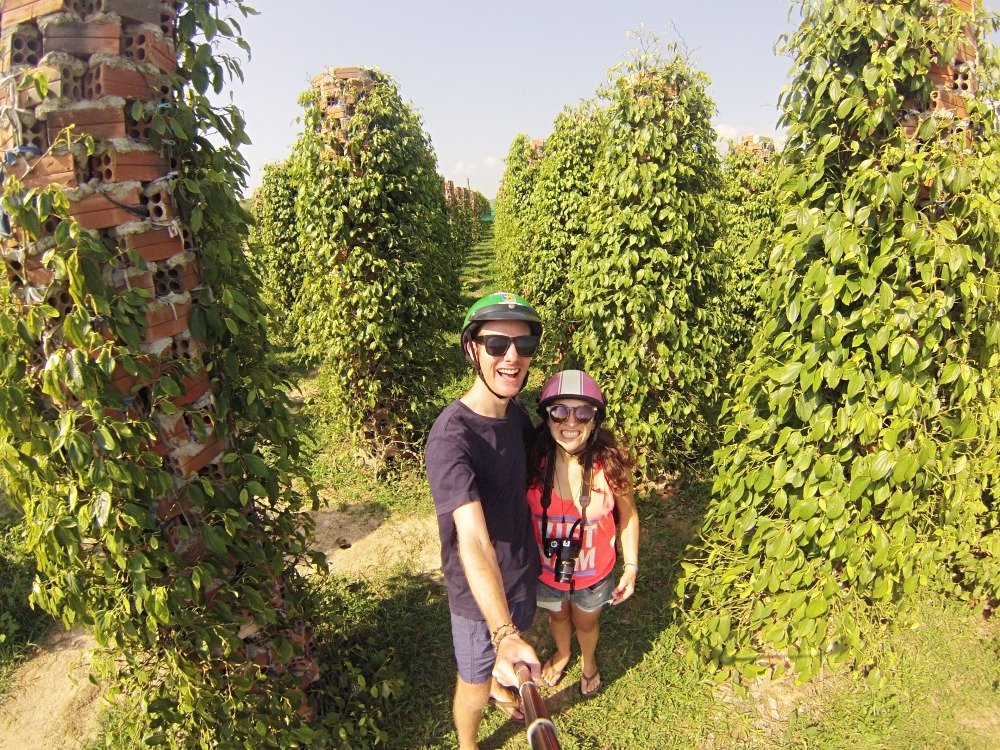 This is what a field of pepper looks like in case you were wondering.

We had rented the bike at midday and paid for 24 hours. A whopping $3. We’d put an additional $2 of gas in the tank. We figured a day out for $5 was pretty decent, so instead of parking it outside our hostel, we drove it around the corner to the shop where we had rented it from.

As we pulled in, the round Cambodian man who owned the bike came running towards us from the other side of the shop where his house was. He smiled and gave us a huge wave as we turned off the engine.

“You are back already?” he asked.

We told him the headlights didn’t work and that we were happy to just return it. He apologized profusely. Tried to give us his own bike to use for the next morning. Then he invited us to sit down outside with he and his friends for a few beers, he insisted.

He handed us each an ice cold Angkor Beer. The cans had pull tabs on top and we peeled them off and tossed them in a pile that they’d already created on the table. There must have been 10 or 15 tabs lying there.

Only the man who owned the bike spoke English. His friends looked at him each time we spoke. They asked us questions about where we were from, what we thought of Cambodia and Cambodian people.

“Everyone is so nice here,” Luke said, “very happy.”

“Of course we are happy,” the man who spoke English said, “look at where we live” he swept his hand across our view, the river behind us lit up by a few street lamps and fishing boats that went past. 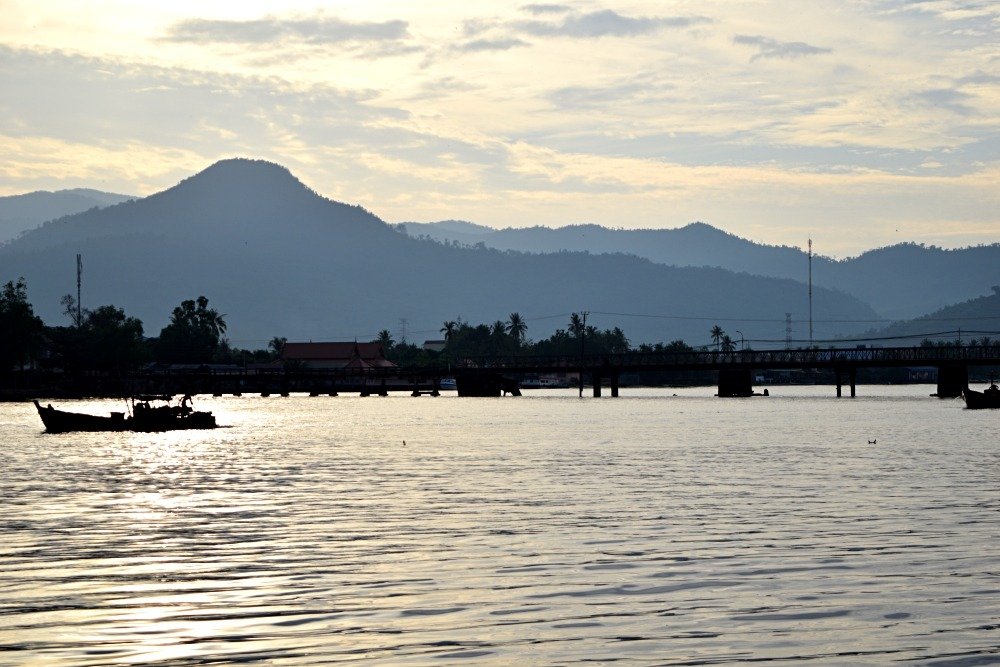 It was the sentiment we’d found all over Cambodia. Cambodian people were happy. Despite the terrible recent tragedy that most adults in the country had lived through, they were happy. Not just content or getting by, but joyous in the places they were with the people that were around them.

They passed us beers whenever they got up for another.  All of us sitting around, laughing, sweating in the evening humidity. Eventually one of the women got up to get some food from inside the house. She carried out a huge pot full of soup and placed it on the table.

I peaked my head into the pot.  The aroma hit me first. It smelled amazing, zingy and sour. Three or four lemon halves floated at the top. She brought out some bowls and, before ladling some in for everyone at the table, she took the lemons out and squeezed out every last drop of gooey goodness from the cooked halves.

“Arkoun,” Luke and I mumbled, thank you in Khmer. We were embarrassed by the fact that we couldn’t say more and the fact that we, who had so much in comparison to them, were being offered such hospitality.

Then the duck heads arrived.

Someone placed a paper bag on the table and ripped it open, turning it into a makeshift plate. The first thing I saw was the beak.

We both shook our heads.

“You must!” he insisted, “It is a Cambodian delicacy!” and he handed us each a head.

We looked at each other, duck heads in hand. I could feel the entire table staring at us, waiting for our reactions.

It was now or never. I took a bite of the bill. It was crunchy. Really crunchy. It was kind of like an over-fried potato skin. It mostly tasted like salt, which I love. I nodded and agreed with Luke. They erupted in applause. Luke and I laughed, they laughed, we were all still sweating, all a little bit drunk. We all ate our heads, drank more Angkor beer, piled our pull tabs until the tower tipped over.

We went back to our hostel that night and got under the covers still laughing.

“I can’t believe how kind people are here,” I kept saying to Luke. I said it constantly as we made our way through Cambodia. This country stole my heart in so many ways. The landscape was breathtaking and varied. We saw waterfalls, lush rainforest, tropical beaches, ancient ruins, and quite a lot of pepper plants.

But most of all, I look back on Cambodia with so many memories of the incredible people we met.

“Maybe one day you’ll come back to Kampot,” our new friend said to us as we were leaving. “You come back here and say hello. I will remember you, I promise.”

What are your favorite moments and memories from your travels? I’d love to hear your stories! Let me know in the comments or over on Facebook.

The Logistics: Getting to and from Kampot is SO easy. If you are coming from Phnom Penh you can organize transport with any of the private bus companies around the city. We moved onto Koh Rong from Kampot and easily arranged a bus with our hostel.

It really was incredible! The duck heads threw me at first, but they were actually okay! haha