Day of the Dead in Mexico City is an exciting time to visit. It’s nothing like I was expecting and it’s certainly nothing like Halloween, that’s for sure! Day of the Dead is a fascinating experience and while it’s celebrated differently around the country, you’re sure to get a better understanding of it with a trip to Mexico City.

What Day of the Dead in Mexico City Looks Like

The Mexico City Day of the Dead Parade 2019 will take place on November 2, 2019. This is the first time that the parade will actually be on the holiday. Usually, it is the weekend before the holiday, but since the 2nd falls on a Saturday, I suppose the city thought it would be fitting to have them on the same day.

The time has not yet been announced, but it will likely be around midday. Plan for any time between an 11am and 3pm start.

The week before the day of the dead parade, there is usually an alebrijes parade. This is also a wonderful site. Once the parade is over, the alebrijes will decorate the main street, Paseo de la Reforma for the rest of the month and even if you miss the parade, you will be able to see the floats all over the street leading up the Dia de Muertos.

Once I know the time of the parade, I will post it here, so bookmark this blog post and revisit closer to the date. In the meantime, you can follow Time Out Mexico and the Mexico City tourism board on their websites or on Twitter and Facebook to receive updates when they are made.

What is Day of the Dead?

Day of the Dead, or Dia de Muertos, is a celebration of the lives of those that have passed. Dia de Muertos has been a day of remembrance since before the arrival of the Spanish. In fact, before Spanish colonization, Dia de Muertos was celebrated in the summertime.

It wasn’t until the Spanish had to figure out how to make this holiday a little more, well, Christian, that it was moved to the same dates as what many people know to be All Souls Day – November 1st.

Originally, the holiday was only really celebrated in central and southern Mexico. The indigenous people from the northern part of Mexico had different celebrations and customs.

Some people believe that the spirits of the departed visit on October 31st and leave again on November 2nd.

Now the holiday has taken on a slightly more commercial form, especially here in Mexico City. If you want to experience Day of the Dead the way the more indigenous people still celebrate it, you’ll have to head to areas around Oaxaca or Chiapas. 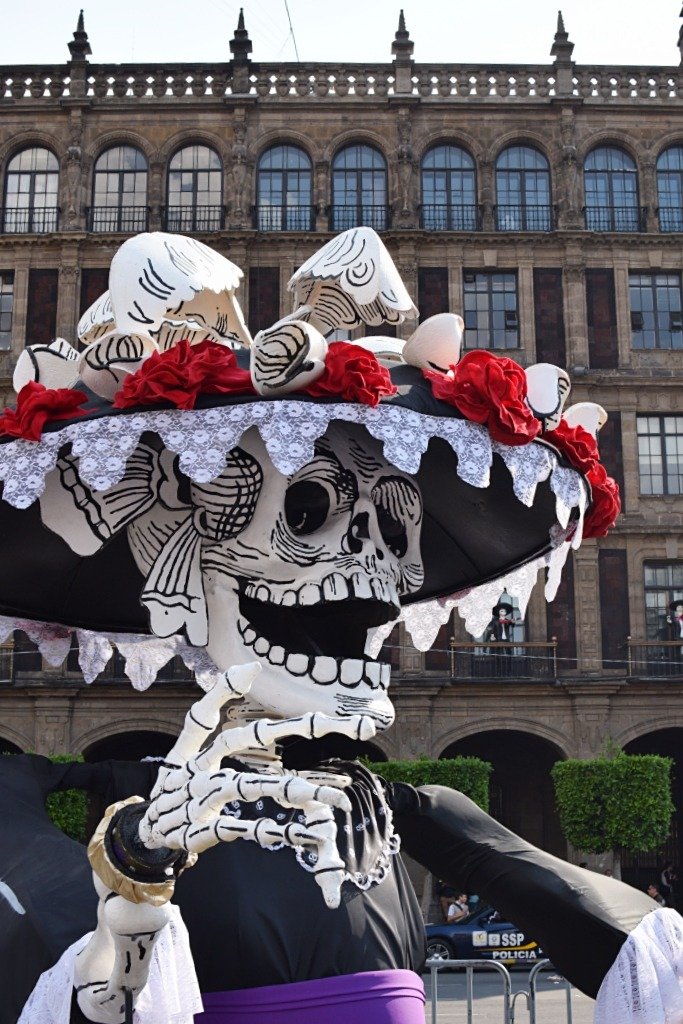 If you’ve ever seen pictures of Day of the Dead celebrations in Mexico, you may be familiar with the image of a female skeleton wearing a big hat. The Catrina represents the “Lady of the Dead,” which was the goddess that the pre-Colombian people worshipped waaay back when these celebrations first began. 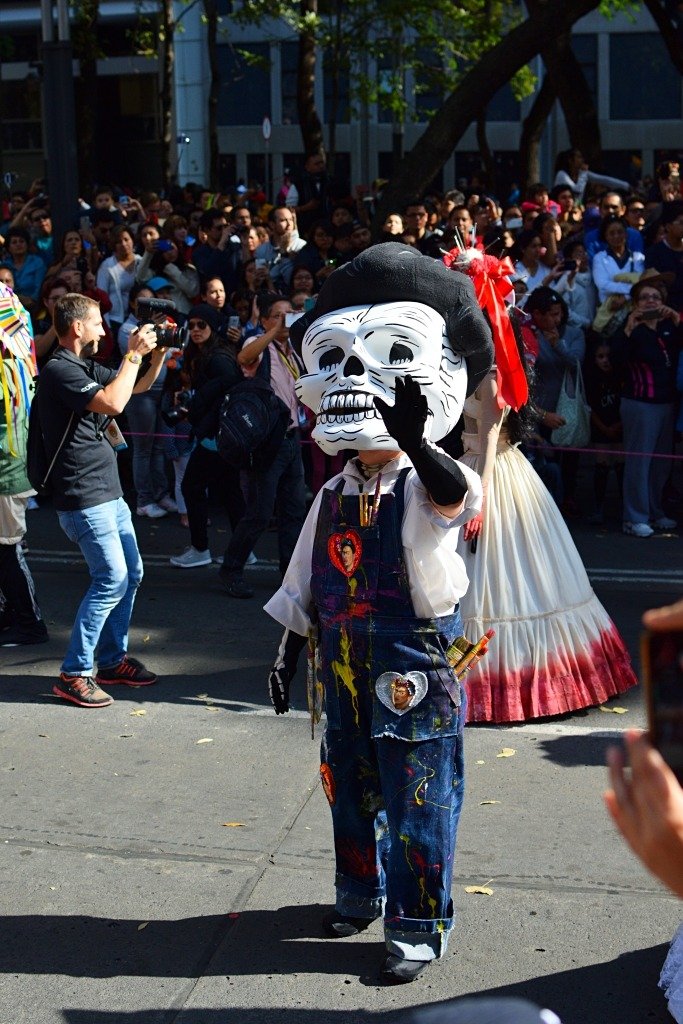 What to Do on Day of the Dead in Mexico City

There are a few things that you can do during these few days in Mexico City. The first is to experience the parade. You may have seen in the James Bond film, Spectre, where Bond runs through a Day of the Dead parade at the start of the movie. Up until that movie came out, no parade for this day actually existed in Mexico City.

The city decided that as a way to bring more tourism to the downtown area, they would start having a parade. So in 2016, Mexico City had the first official Day of the Dead parade. Word is that this will continue to be an annual event and you can look for it along Paseo de la Reforma on the last Saturday of October.

It’s a pretty cool experience and locals and tourists alike line the sidewalks from the Angel of Independence monument all the way to the Zocalo to catch a glimpse of the brightly colored floats and the beautifully costumed dancers. It’s not terribly authentic, but it’s still a nice parade. 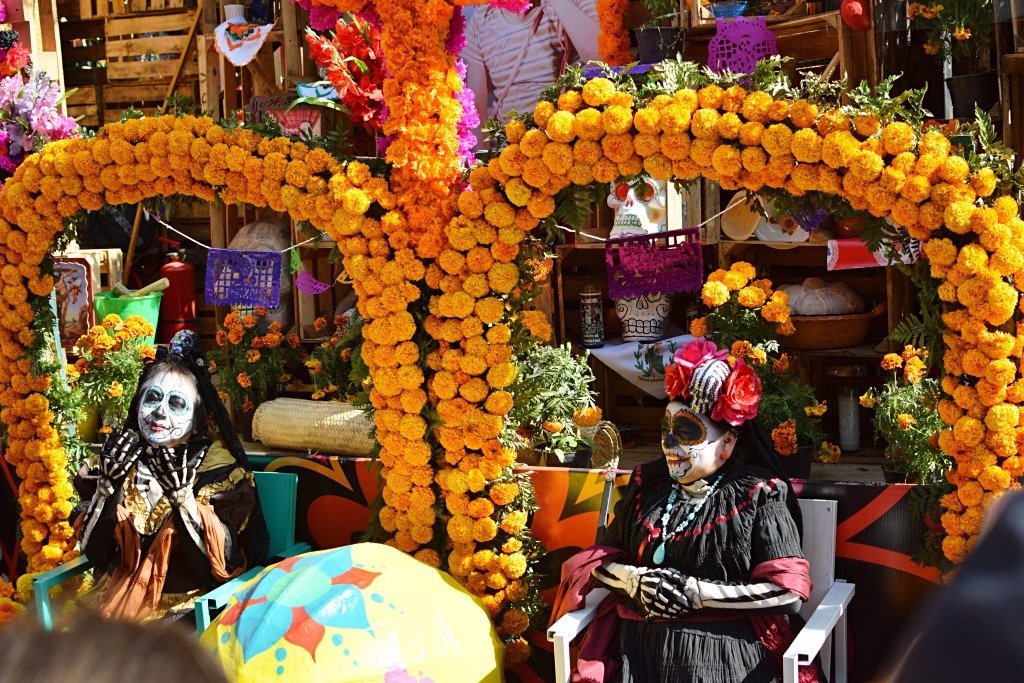 Another thing you can do on Day of the Dead in Mexico City is to head to the Zocalo. The main square is packed with traditional shrines made with the holiday’s signature bright yellow marigolds. There’s a stage where different Mexican bands play everything from Mariachi music to classic Mexican Banda. Things really get going here at night when people dress up in different scary costumes a-la Halloween style and do their best to scare the crap out of you.

I also recommend spending some time in more local neighborhoods like Coyoacan or Mixquic. Here you’ll be able to see how locals spend their time. Just be sure to be respectful and remember that people may be drinking and having a blast, but this is a family and close friends sort of holiday. People are still commemorating the lives of those they have lost. 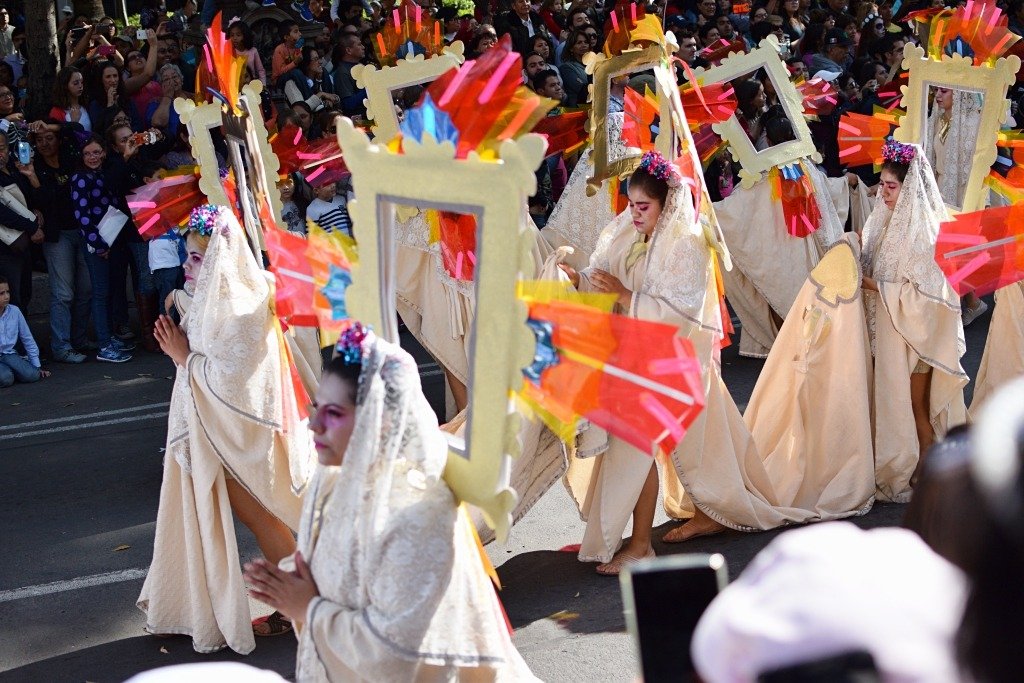 Tours for Day of the Dead in Mexico City

There are some really great tours out there that will take you to parts of the city that you might not want to or know how to get to on your own (especially with limited Spanish).

I highly recommend this tour with Mexico Underground. I personally know the guide, Ubish, and he is a total wealth of knowledge about Mexico, Mexico City, foods, history, and of course, Dia de Muertos.

On this tour, you explore the chinampas where they grow tons of the beautiful marigolds used during this time of year. It also includes a nice dinner of local foods and then a visit to a cemetery where locals are dining and celebrating the lives of those that have passed.

Another option which is on October 31, is with legendary Mexico City foodie, Anais of the Curious Mexican. She recently launched an amazing company called Devoured and they will be running the tour which includes a market visit, plenty of food and drink, and her expert guidance. You can book that tour here.

It includes a mezcal tasting, a Mexican craft beer tasting, a walk around the flower altars in the city, Day of the Dead bread (a must-try at this time of year), and tacos!

The Day of the Dead Festival in Mixquic is always on the night of the First and Second of November and is quickly becoming more and more touristy. I think this year will see more tourists than ever before. That means getting in and out via Uber will likely be nearly impossible. I recommend booking a car service to drop you and then meet you somewhere to bring you back to the city center. Alternatively, you can take the metro and then the bus which is very cheap.

Things to Be Aware of

Many people simply celebrate Day of the Dead at home behind closed doors where they have built or bought their own shrines to commemorate their loved ones. However, if you are looking for the most public place for celebrations, you’ll find those at local cemeteries, not in the streets of Mexico City.

The city is incredibly crowded on the nights of Dia de Muertos. People want to see what the city has put on, just like you do. Have patience, look out for your belongings, and just be prepared to wait as you walk down Madero to the Zocalo.

Try to avoid taxis or driving in general during these days. The traffic in Mexico City is never good, but it is especially bad over this period. You’ll likely just be sitting in traffic most of the day.

If you do decide to go to a cemetery, I recommend that you don’t go alone. It’s a holiday that includes a fair amount of alcohol and just like any major city, you never know what to expect. That being said – it’s a pretty merry time and visiting the cemeteries during this time is a very interesting experience. 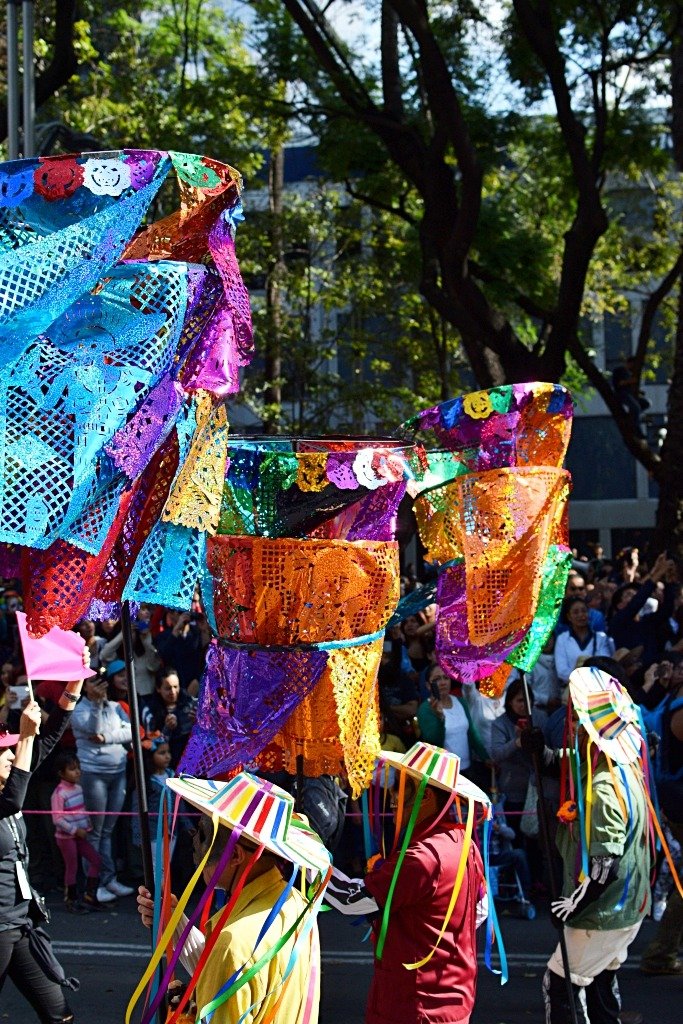 If you want to experience downtown Mexico City during the Day of the Dead, then staying in the city is the best option. My favorite boutique B&B in the center is definitely Chaya B&B. It’s located right next to Alameda Park and the Palace of Fine Arts and is within walking distance of the Zocalo. I wrote a full review of Chaya B&B here.

I also recommend checking out Airbnb. There are tons of places in the historic center at a reasonable price and it means you can also self-cater since you’ll have a kitchen. I’ve put together a whole list of the best Airbnb places that I’ve found in Mexico City here.

If you’ve waited a little bit too long to book or you prefer bigger chain hotels, the Hilton Reforma is a great historic center option as is the Marriott and the Sheraton which are both located along the parade route on Paseo de la Reforma.

Of course, you don’t have to stay in the Centro Historico to enjoy all of the parties that take place during the Day of the Dead. If you want to enjoy all that the city has to offer, you can stay in Roma or Condesa – two of my favorite neighborhoods for restaurants and bars.

My absolute favorite boutique hotel in Roma is La Palomilla. Their rooms are gorgeous and it doesn’t get better than their rooftop area where you can chill with a book or a beer (or both). Read my full review of La Palomilla here.

For a great spot to stay in Condesa, check out Condesa Haus. It’s a cool converted mansion with amazing art deco touches and seriously stunning tiles. You can read my full review of Condesa Haus here. 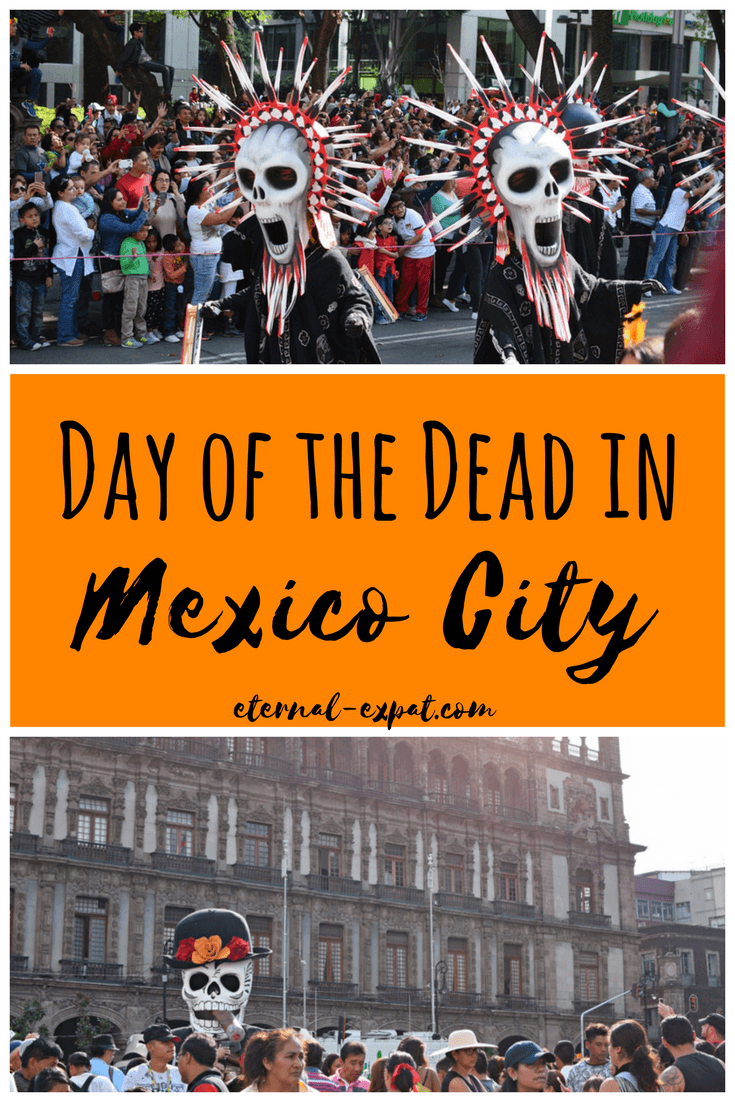 « What to Pack for Oaxaca
A 5-Day Mexico City Itinerary »