I’m not notoriously known by friends and family for my love of winter, but there was something about winter in Copenhagen that stole my heart (and numbed my toes).

The crisp chill, the bundled-up bicyclists pedaling to work, the cozy cafes where you can finally unwrap yourself. Denmark does winter in a way that I haven’t experienced before.

There’s no bad weather, only bad clothing, I was told by our new Danish friend when we arrived in early February. So with a whole lot of silk and wool layers, we found a ton of things to do in Copenhagen in winter.

How Cold is Copenhagen in Winter?

Really cold, guys. Especially if you’ve been living in warmer climates or you’re not used to a cold that literally reaches you to your core.

The thing is, despite the lack of sunshine and bitter coldness in your fingertips, Danes are out and about cycling to work, enjoying lunch al fresco, and strolling along the waterfront with their babies.

If you’re traveling onward during your winter trip, you may even see the Northern Lights in Denmark while you’re there! 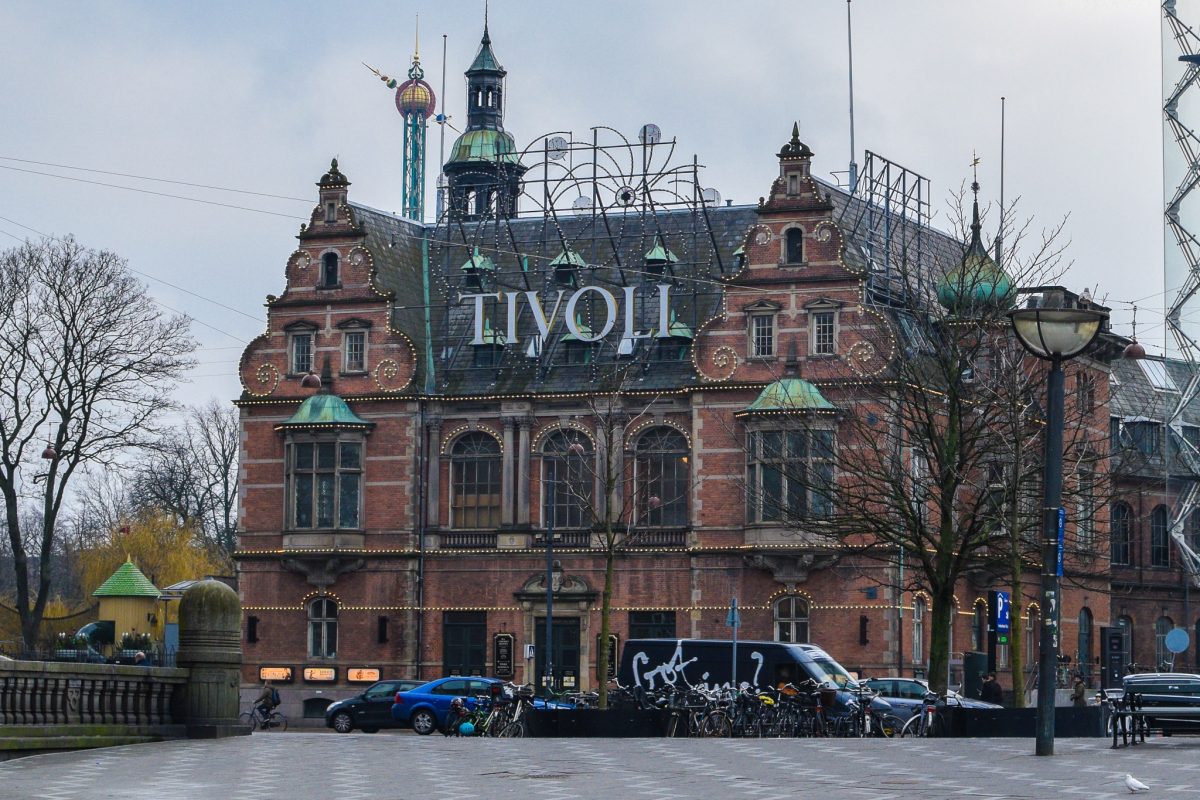 Tivoli all closed up against the winter chill.

It’s All About the Hygge

If you love cozy winters with that feeling of home and warmth, you should come to Copenhagen in winter.

The Danish word hygge, apparently pronounced like hue-guh (I’m not 100% sure, I don’t speak Danish, but this is what I’ve been told), means a feeling of coziness. It’s used to acknowledge a special moment or feeling. There’s no real direct translation, but I felt it several times during my month in Copenhagen during the icy winter months.

If you’re planning a trip to Copenhagen, I recommend reading The Little Book of Hygge as well as The Year of Living Danishly. Both offer a lovely insight into the country’s culture and people. 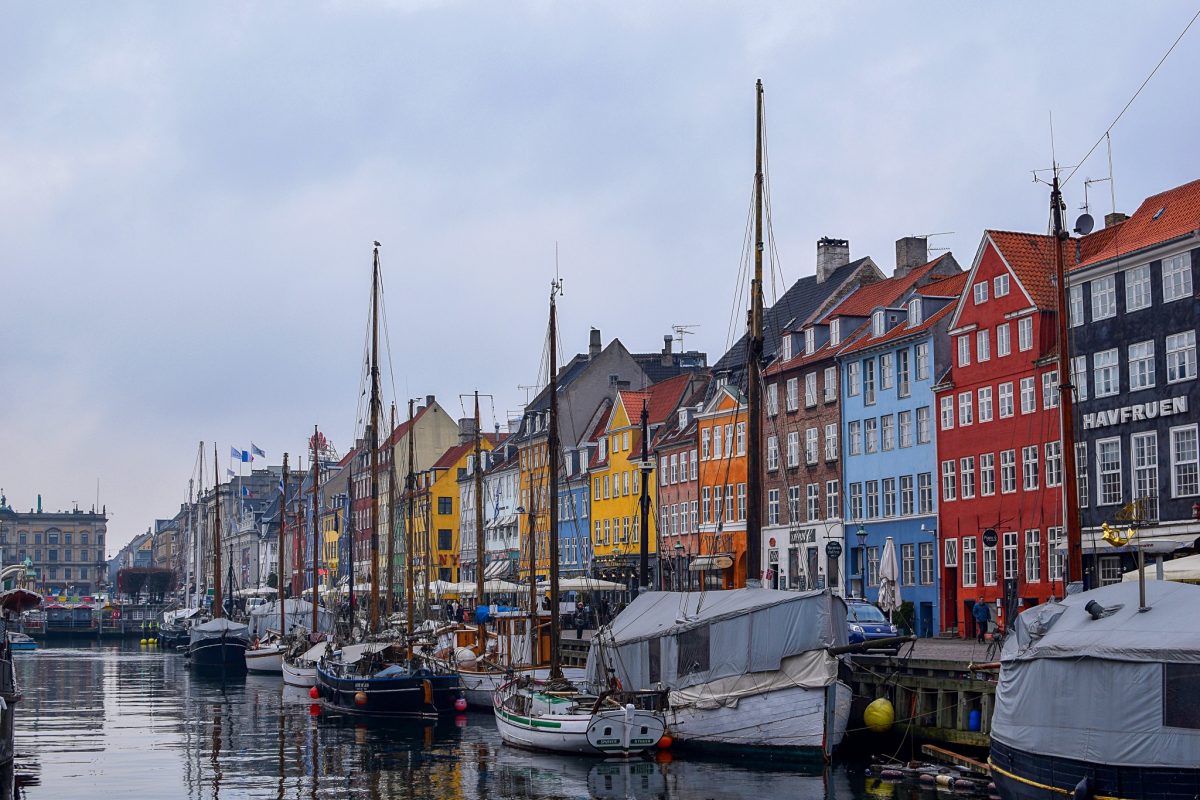 Things to Do in Copenhagen in Winter

You’ll have to skip the lovely Tivoli Gardens on your winter trip to Copenhagen. At least during my trip, the park was completely closed. It was too cold! Too much snow!

While it does open for the Christmas period with markets and other fun activities, it’s best to check their website before your trip so that you know whether it will be open during your stay in Copenhagen. 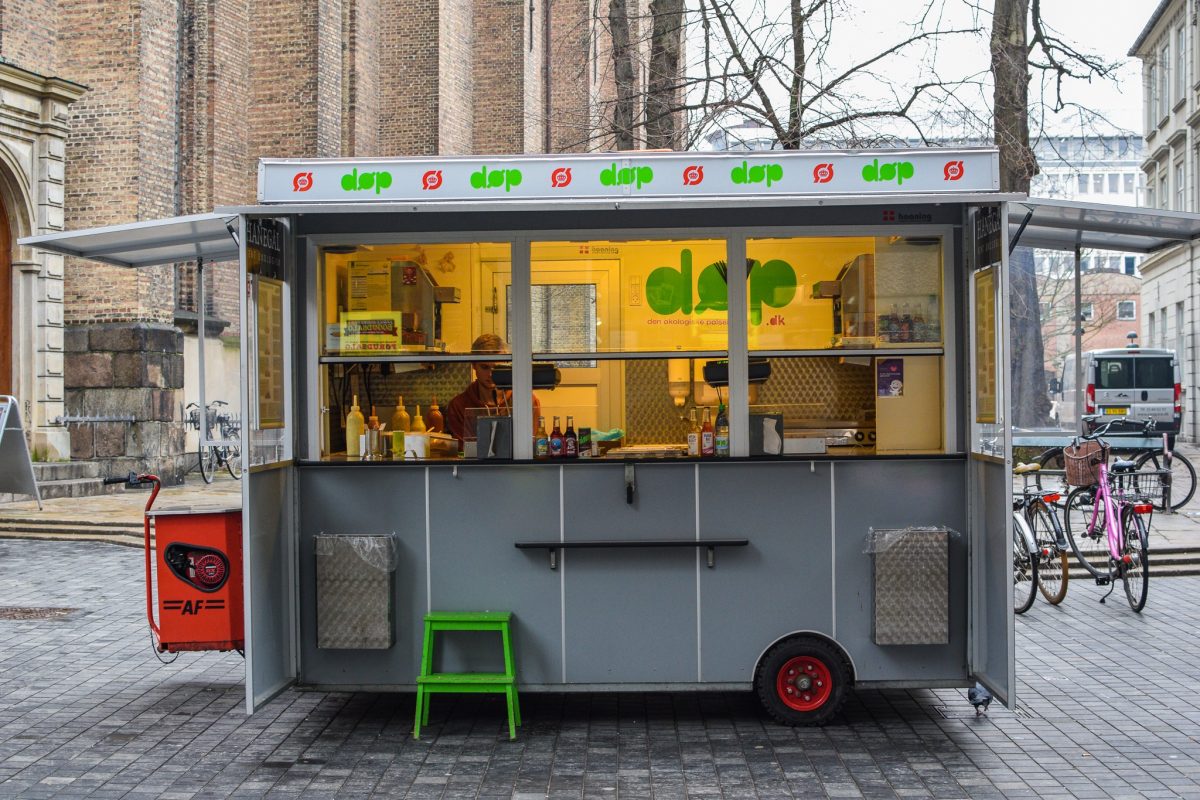 This is the place to look out for (there are several of this chain around the city).

Did you know Danes love a hotdog? At least, they do in Copenhagen. There is literally a hot dog stand on every corner and boy oh boy they are SO much better than dirty water hot dogs in New York City. The most popular spot, and the one we tried several times during our trip to Copenhagen was Døp.

All of the sausages here (and they are defo sausages; these are not your average frankfurters, my friends) are made with organic meat and they are so delicious. I highly recommend trying the housemade mustard. These are perfect to grab on the go when you’re exploring Copenhagen and you don’t want to stand still for too long!

They’re piping hot, too, so it’ll help warm up the core. 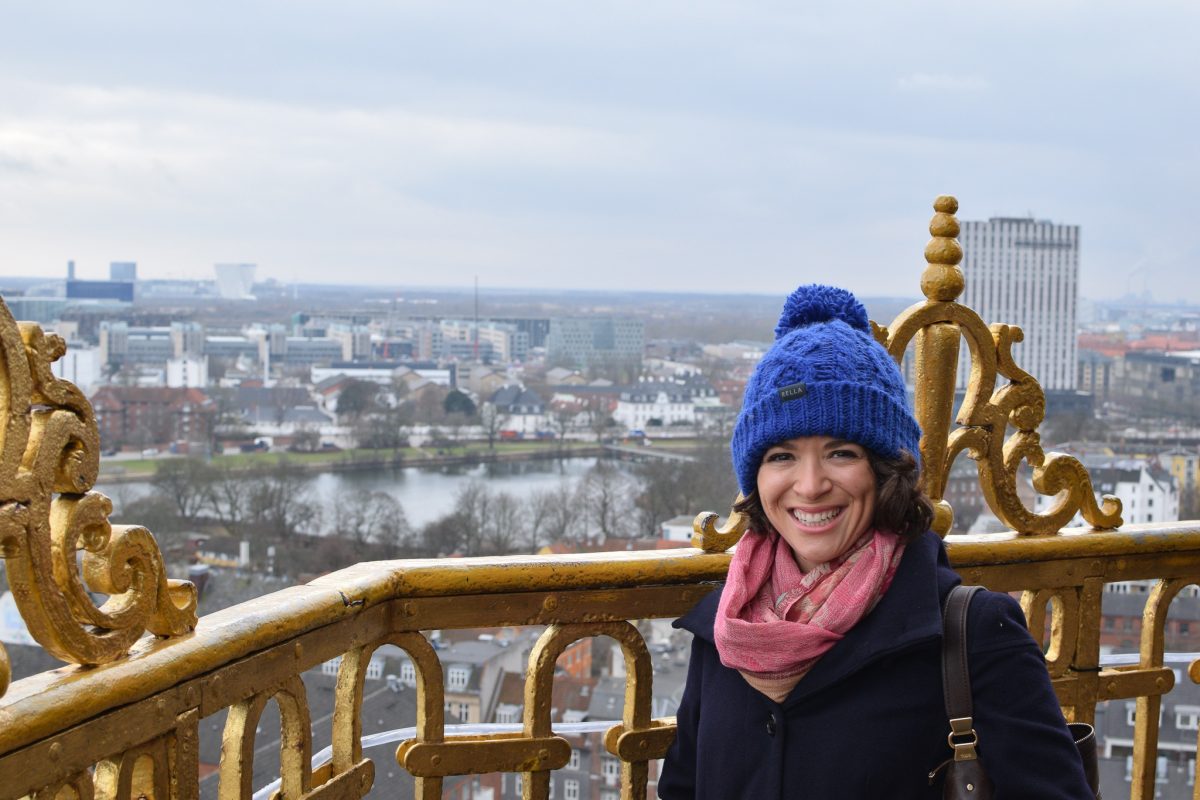 Freezing my butt off in Copehnagen, but loving it anyway!

Go to the Top of the Church of Our Saviour

I recommend doing this at the height of the sun around 12 or 1pm when the day is warmest. It’s pretty windy up there, so you won’t want to stay outside for long, but the views from up there are well worth the near-frost bite.

Your ticket also includes entry to the rest of the church, so you can enjoy a break inside sitting down in one of the pews while you warm up again.

Have Danishes (and hot chocolate) in a Bakery

If ever we started to feel too cold on a day out in the city, we always popped into a bakery. You know it’s going to be nice and warm inside when you can’t actually see through the windows because there’s so much condensation on them.

Luke and I would usually share a danish, maybe one we’ve not seen before, and then have a hot chocolate or a coffee. My personal favorite bakery that we tried was the St. Peder’s Bageri. It’s well known in the city for being the oldest bakery in Copenhagen, but it’s not just the oldest, it’s the best. I mean, okay, we didn’t try EVERY bakery in Copenhagen, but we tried a lot and this one stands out by far as my favorite.

It’s well worth seeking out while you’re in the area. We loved the cinnamon roll we had here so much that we bought a couple more pastries to take home with us for breakfast the next day. Everything we had from here was exceptional. 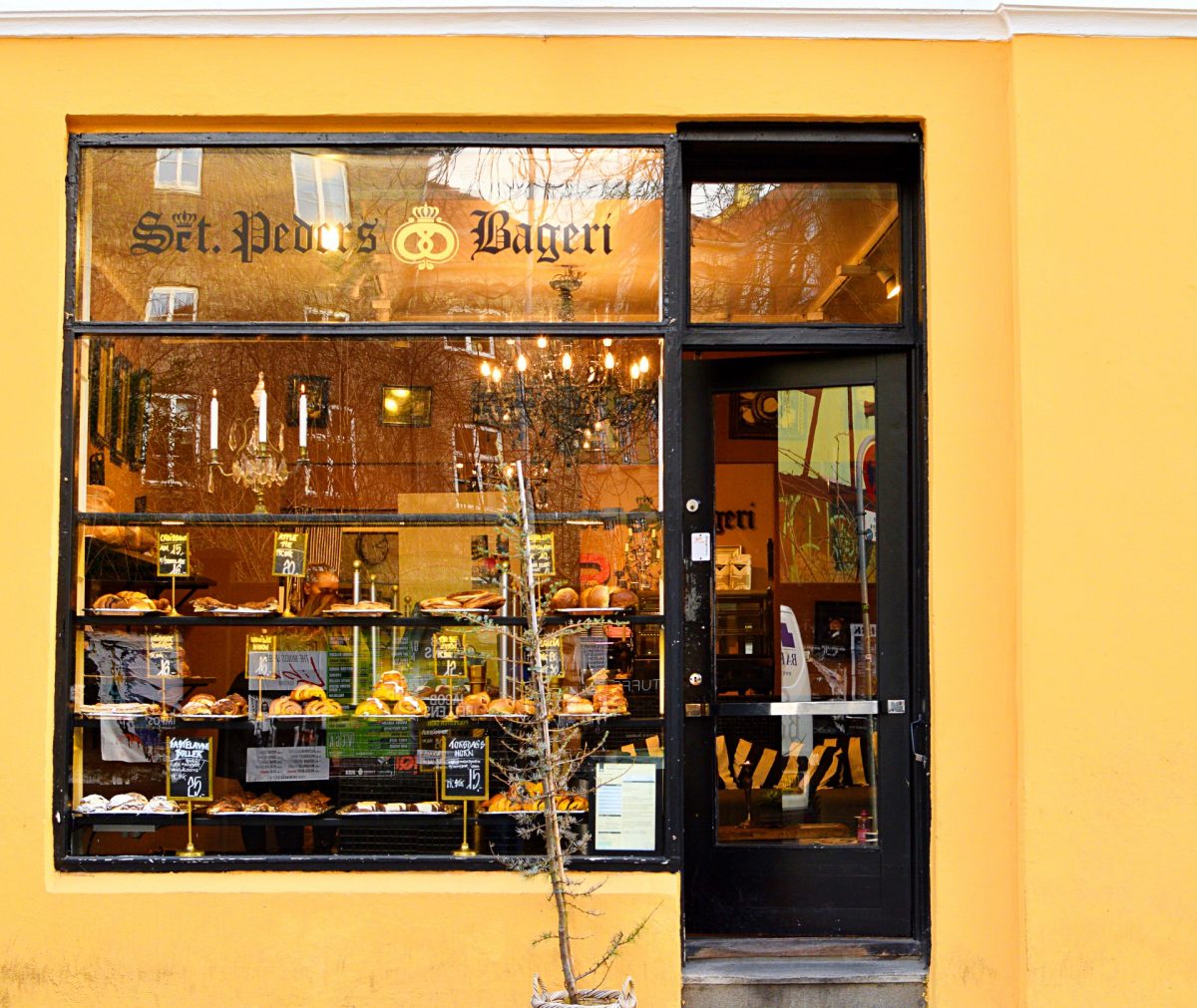 Explore All of the Libraries

If you love books and libraries like I do then you should definitely explore some of the beauties here in Copenhagen (I force my boyfriend to go to libraries and he forces me to go to random soccer stadiums, so I think we’re even). Bonus, they’re always toasty warm and almost all of them have a cafe to grab a coffee.

My two personal favorites are the University library and the Royal Library (also called the Black Diamond). Both are so architecturally interesting on the outside and packed with beautiful books and comfortable places to sit on the inside. 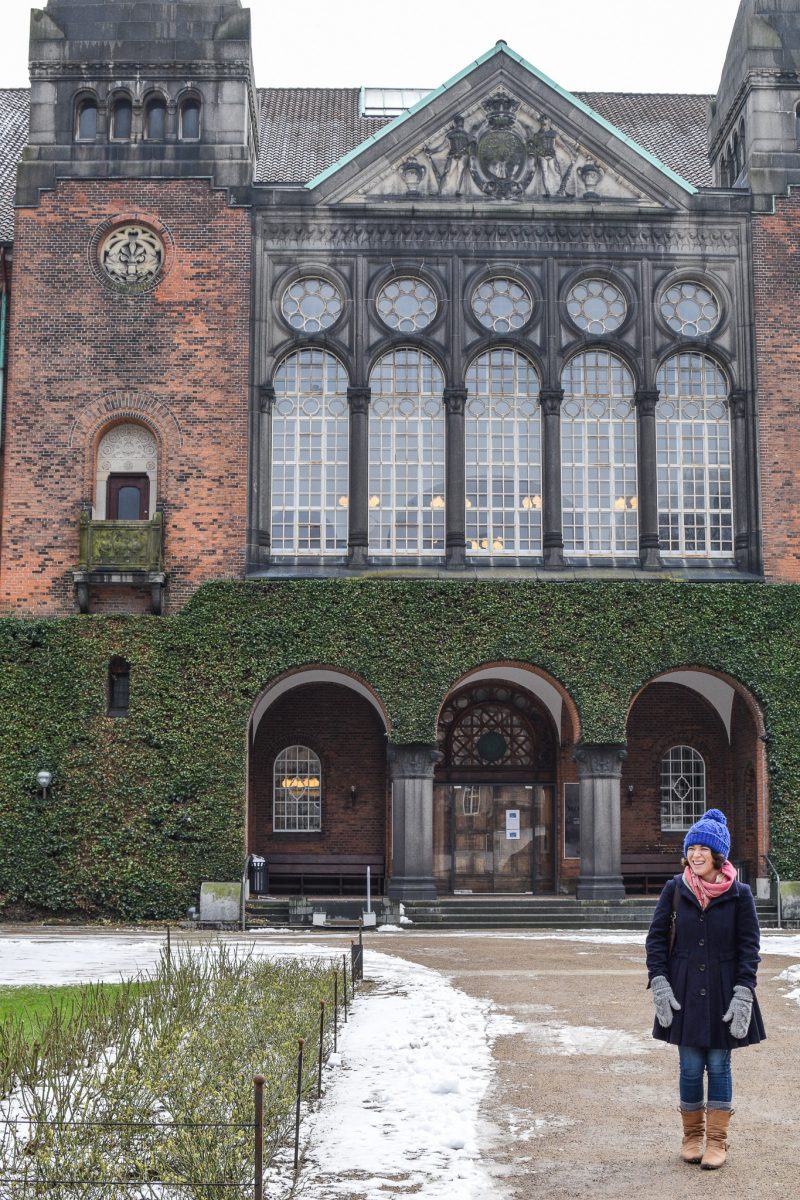 Hanging out around the University library- that ivy!

Head into a Market for Some Smørrebrød

No trip to Copenhagen is complete without having some Smørrebrød, no matter what the season. There are two places I highly recommend – Aaman’s deli and Hallernes, which is inside Torvehallerne food hall.

I really loved the setting at Torvehallerne because you could sit inside right at the counter where they make the sandwiches or you could have it at one of the communal tables. It was packed with people and they were very reasonably priced here.

Aaman’s Deli is a little bit more upmarket and more expensive (but what isn’t expensive in Copenhagen to be honest?). However, the open sandwiches here are unlike any that I saw around the city. They use traditional Danish ingredients like herring and elevate it to something much fancier than your average sandwich. 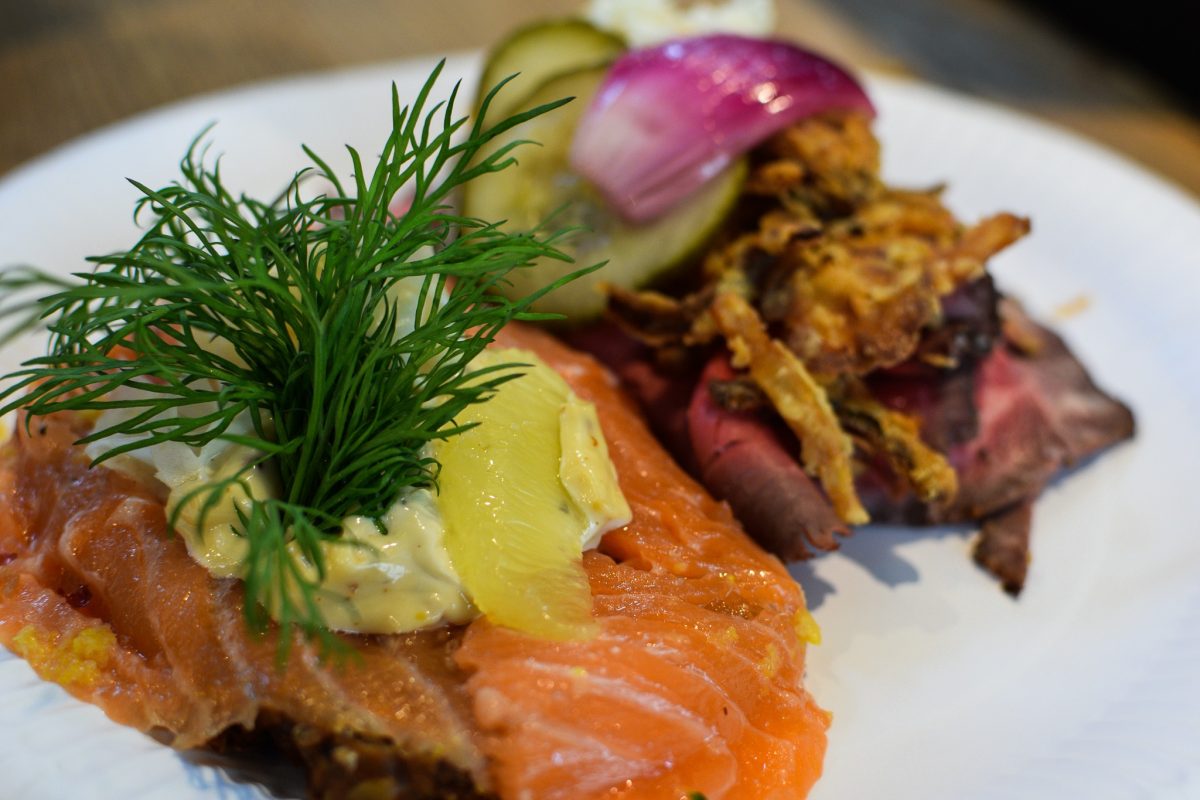 These were my two favorite smørrebrød that I had during our four weeks in the city! 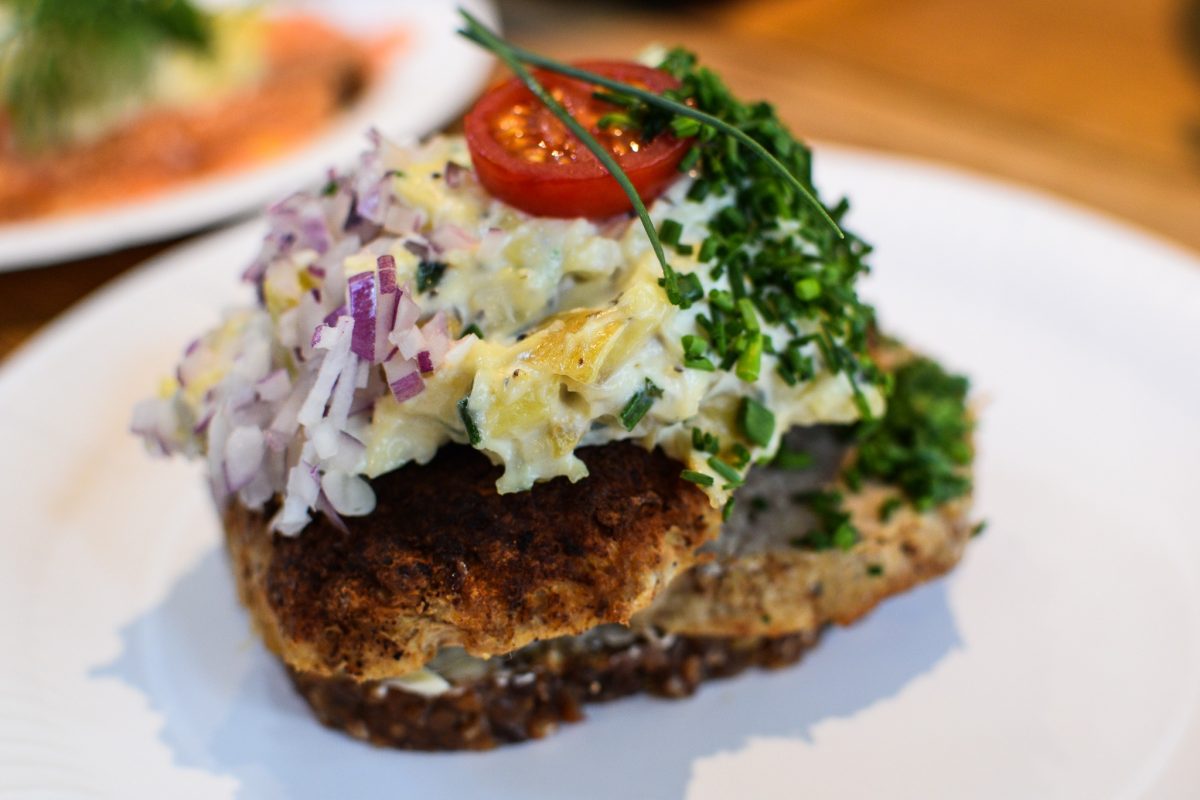 Climb up the Round Tower

Another fun indoor activity is the Rundetaarn or the round tower. It costs 25 Danish Krone, or just under $4 USD to go up the tower, which is a steal compared to other attractions in the city.

It’s a steep walk round and round. According to history, the path is very wide because the king didn’t want to walk to the top of his tower, so it had to be wide enough for a horse and carriage.

The view from the top is lovely and it’s definitely worth checking out the library hall (yes another beautiful library). We spent just over an hour exploring in here and we warmed up enough to head back outside for a few more hours. 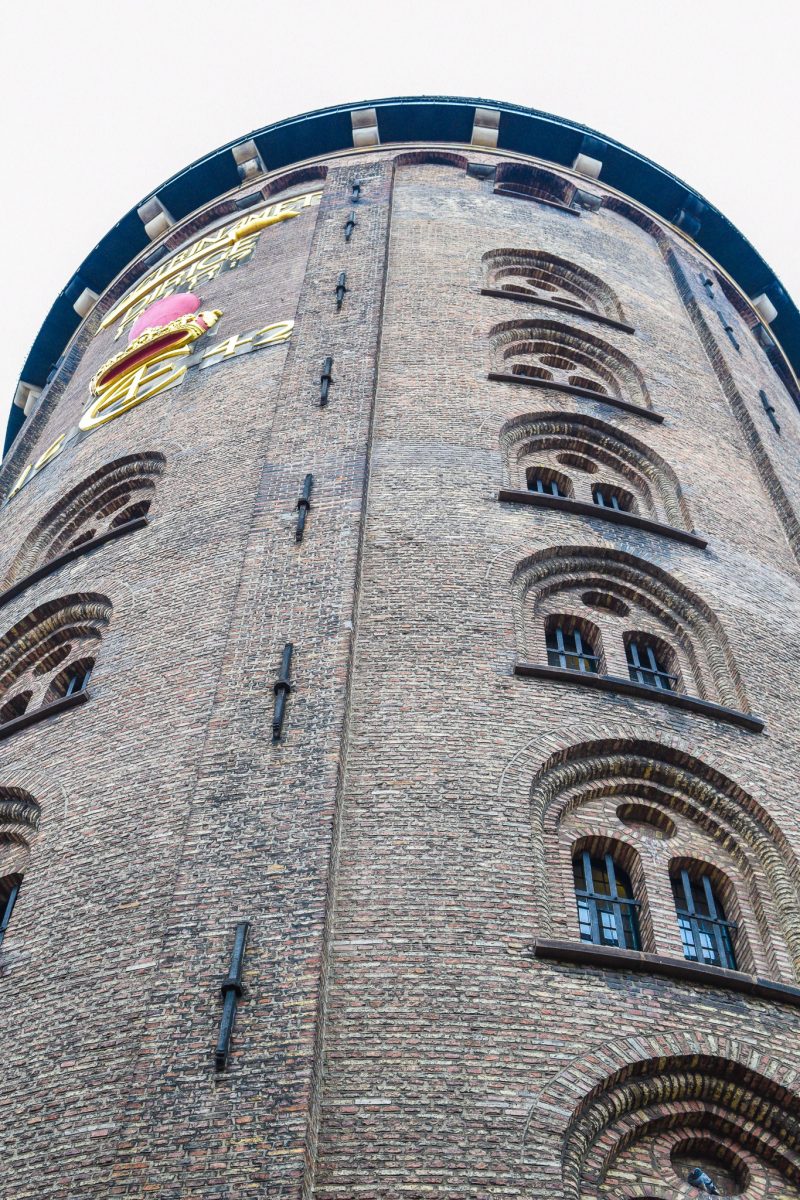 The tall round tower in Copenhagen 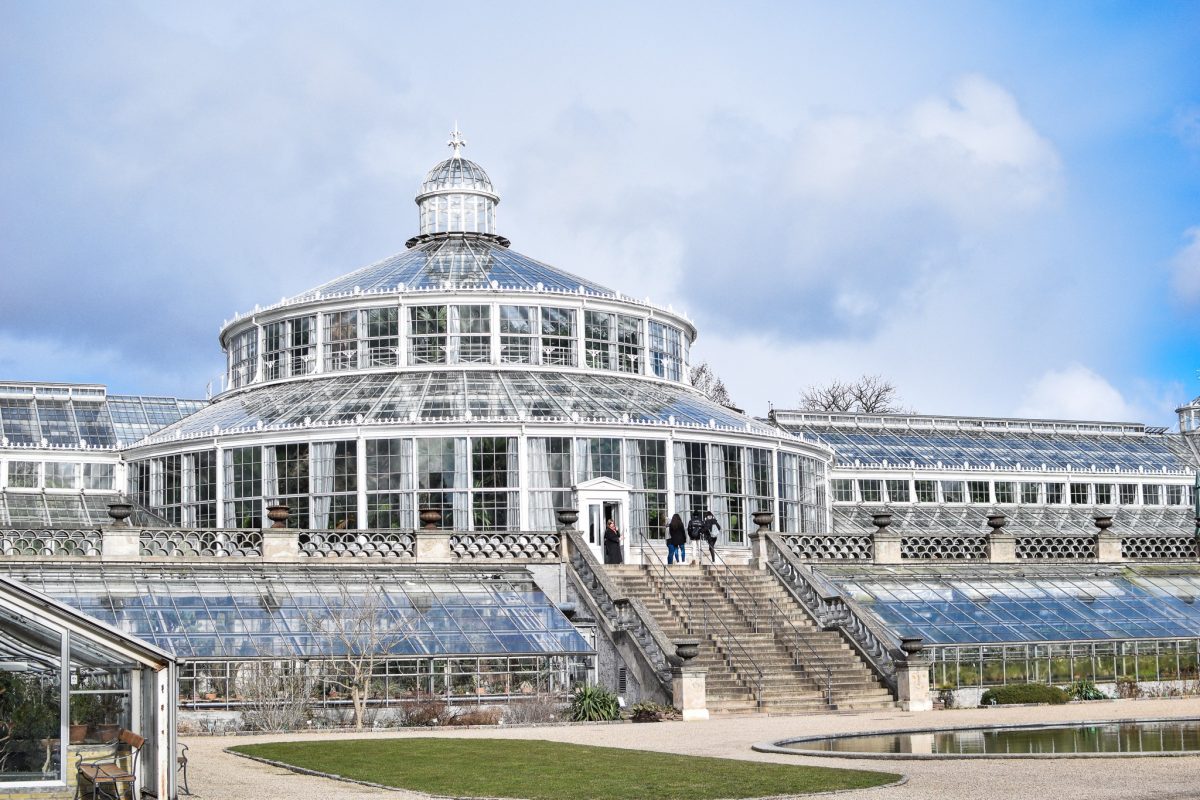 The beautiful Palmehuset in the winter sunshine

If you really want to warm up, head inside this steamy greenhouse. It’s inside the botanical gardens, which is also worth walking around. When you just about can’t feel your toes, head into the greenhouse.

Just be warned, if you have glasses (or a camera or phone screen) they are going to get super duper fogged up!

The plants both inside the greenhouse as well as around the rest of the botanical gardens are really beautiful, even in winter. The thing that I found the most fascinating was that we were not the only people in the gardens. There were families out enjoying some sunshine and fresh air. There were people walking their dogs. There were pre-teens on bikes. It was busy even though it was freezing. 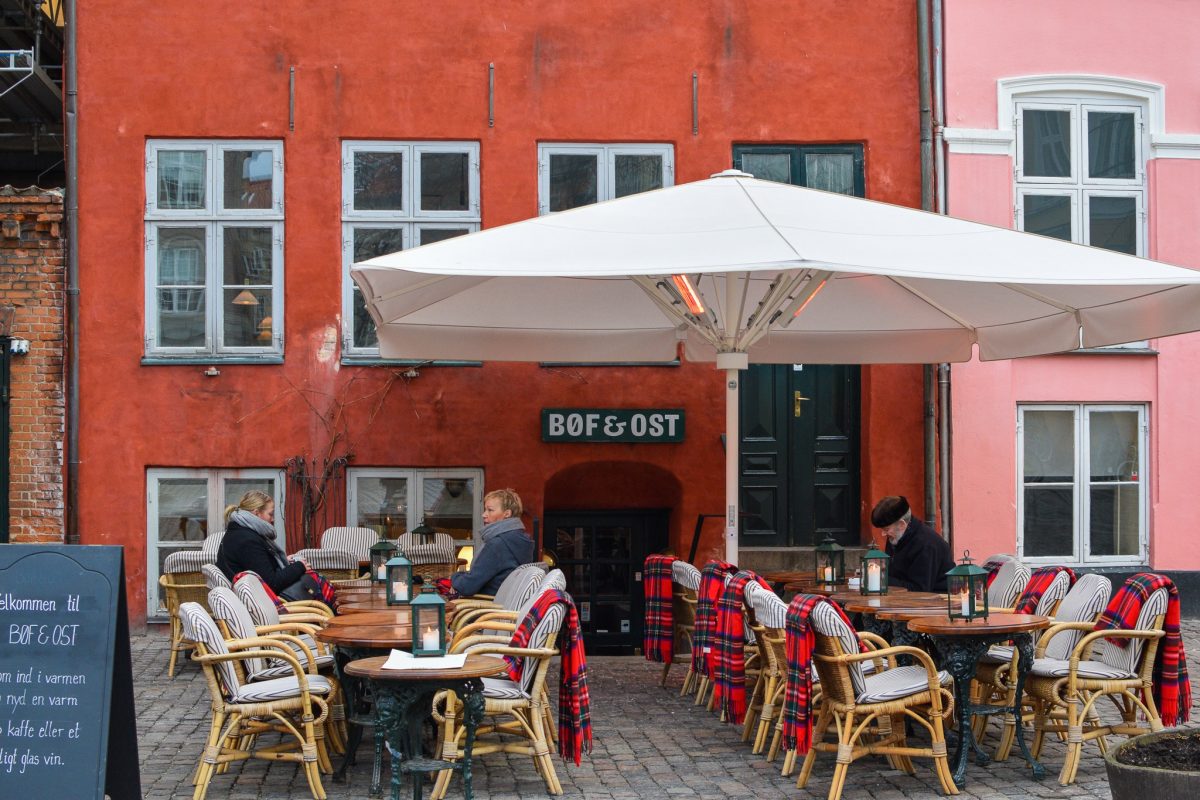 A few people enjoying their lunch outside with a little blanket and of course their coats and scarves!

Dine Al Fresco with the Locals

Just like the people of Copenhagen don’t mind heading out for a walk in the park, they also don’t mind enjoying a beer and a meal outside during the winter in Copenhagen. I found this kind of awesome.

Basically, tons of restaurants have big, thick blankets draped over the chairs outside. So you can drink a hot coffee, throw a wool blanket over your lap, and still chat with your friends without getting chattery teeth.

They embrace the season and they don’t let it ruin what is otherwise an absolutely spectacular city. There’s this wonderful feeling around the city at this time of year and while I’ve never been to Copenhagen in summer, I must admit, I felt all the hygge while I was there in chilly February. 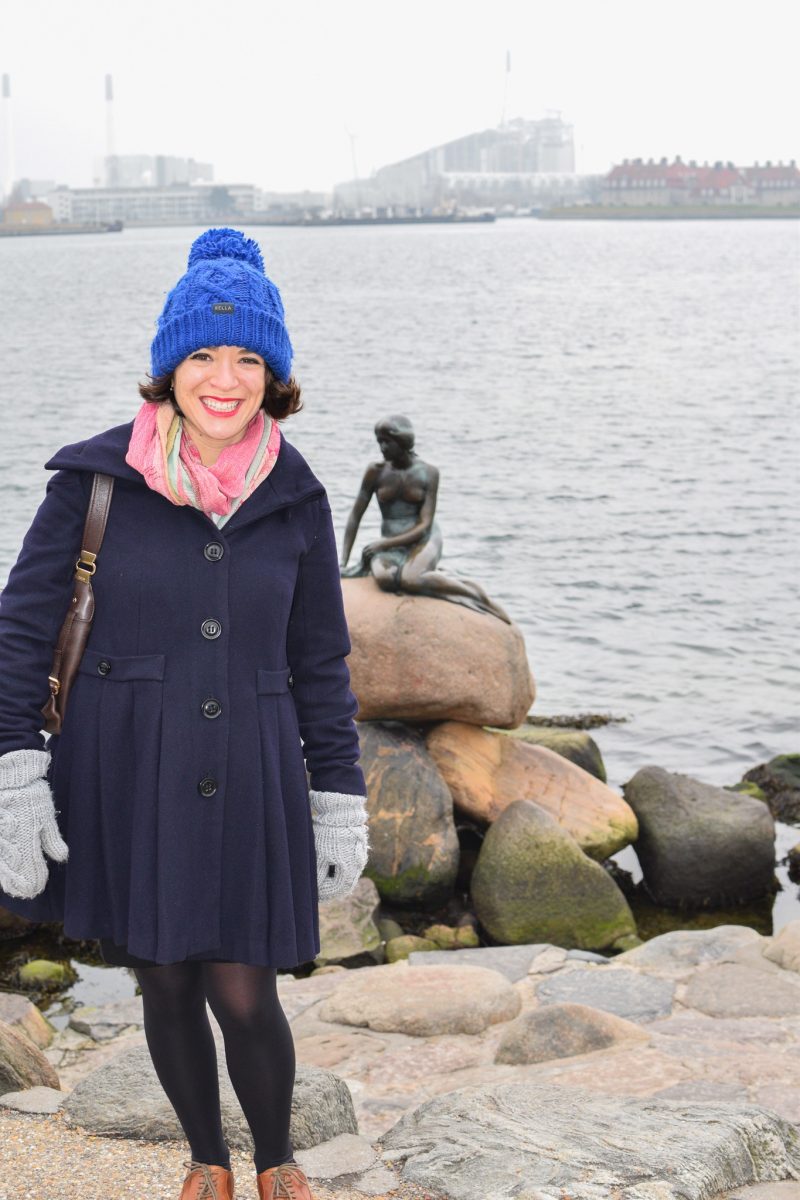 You can quickly check out the little mermaid, but don’t stick around too long. IT’S SO COLD THERE!

No trip to Copenhagen is complete without checking out the colorful buildings in Nyhavn. Sure, it’s freezing and there is an immense wind off of the water, but there’s also this lovely calm there. There are very few tourists at this time of year, so you can easily snap a few photos of the neighborhood without anyone stepping in front of your camera.

Even though it’s not too busy, there are still tons of places to grab food here. It’s definitely more expensive to eat here than in other places, but we stopped into a restaurant to warm up and enjoy a hot coffee. 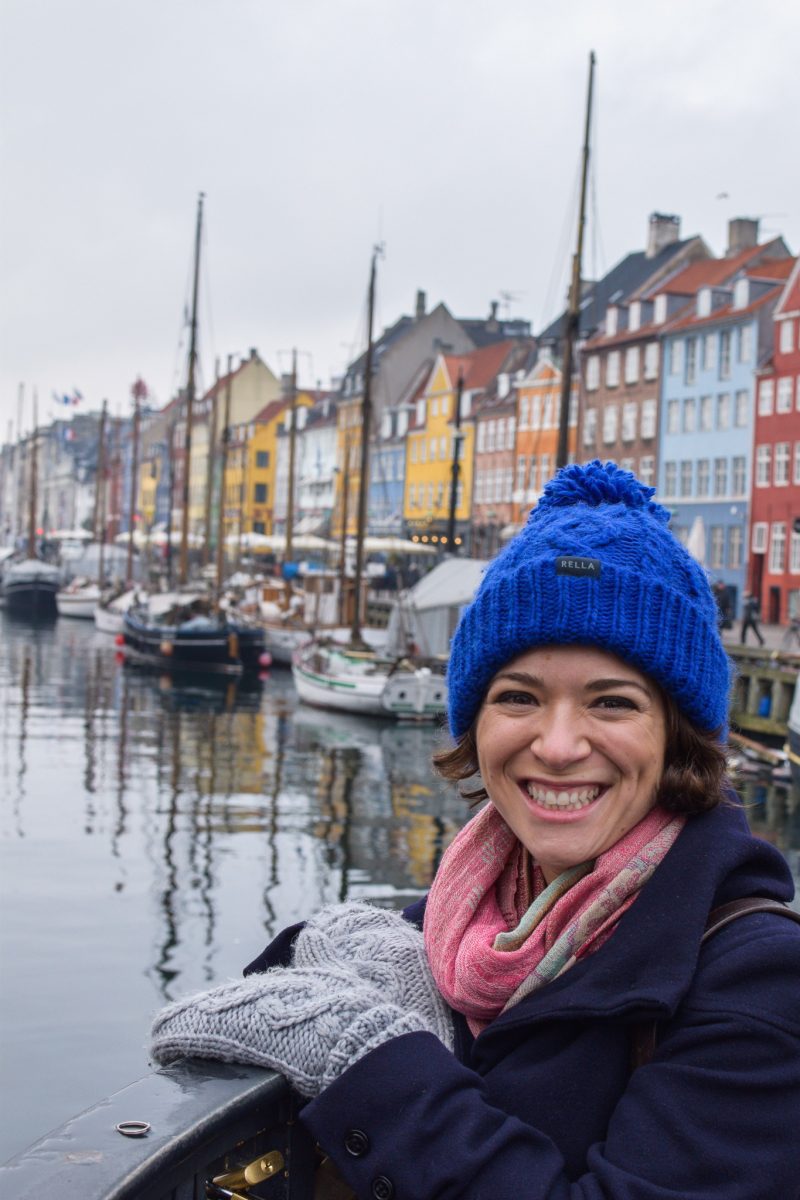 We ended up spending almost an hour just wandering around the port, taking fun photos, and enjoying how quiet it was in this part of the city.

Throughout the year, you’ll find different beers on the shelf in Denmark. During the winter, you get super strong, flavorful dark beers and ales. We loved sampling the different locally brewed beers, but you definitely don’t need more than a few, they are STRONG! We’re talking 9-14% alcohol. 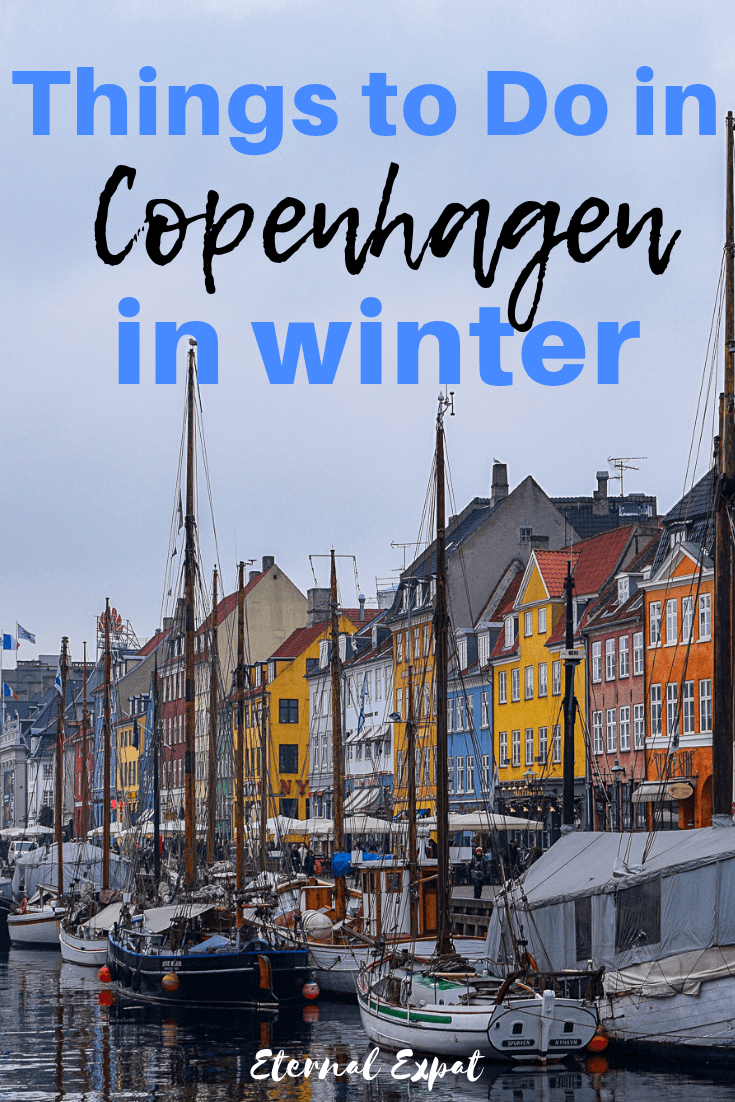