While Huatulco is known best as a resort area with rows of all-inclusive hotels, it’s also a sleepy beach town with tons of quiet bays to explore and a neighboring jungle full of waterfalls to swim beneath. There are a surprisingly large amount of fun things to do in Huatulco, but there’s also plenty of quiet beaches where you can do absolutely nothing.

Explore the Many Beaches

If you’ve come to Huatulco, you’re no doubt here to enjoy a little bit of beach time. Lucky for you this little town is full of them. Every taxi driver we had couldn’t wait to tell us all about the areas nine bays and 30+ beaches (some said 36, others said 37). Many of the beaches are easily accessible by car and are cheap to get to by taxi from the town center, which is called La Crucecita.

I’ve written a comprehensive post about all of the bays and beaches that are worth exploring on your trip which you can read here:

The Best Beaches in Huatulco

The most popular bays are Maguey, Entrega, and Santa Cruz. The bays that are west of town are significantly calmer than those to the east.

Unfortunately, almost all of the resorts are to the east in the bays of Conejo and Tangolunda where the sea is pretty rough. While it’s beautiful to watch the power of the ocean, if you want to swim, it’s best to head to the more popular bays that I just mentioned above. 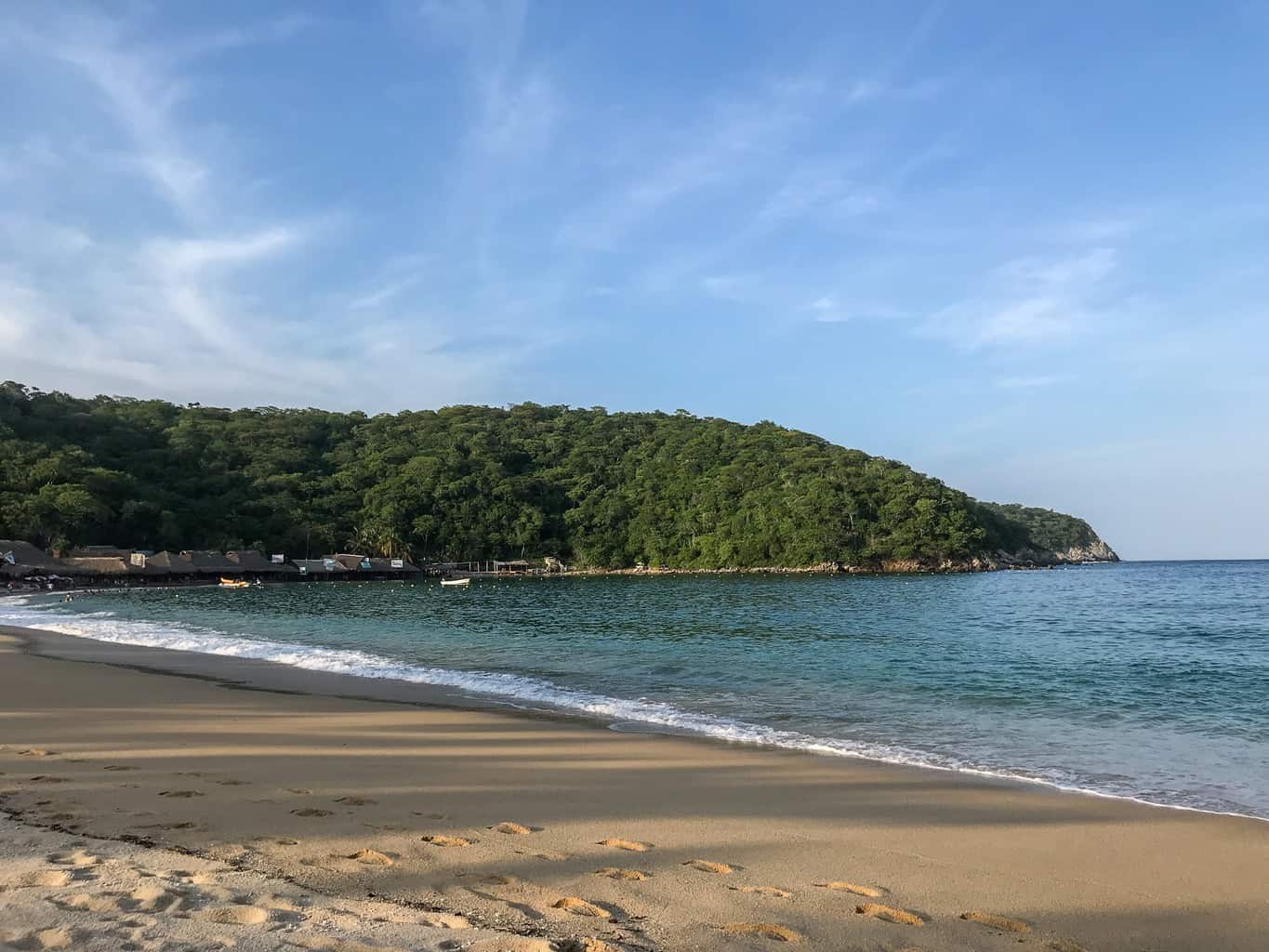 The downtown area of Huatulco, where I recommend basing yourself if you want to explore all of the different beaches while still having access to restaurants and bars, is La Crucecita.

It’s a very small town and you’ll likely be able to see the whole town in less than an hour, but it’s still quite a quaint place worth spending some time. The main square is where you’ll find the small church and as the sun begins to set, the main square comes alive. People play music inside the bandstand. Vendors set up along the paths selling souvenirs, bracelets, and ice cream. The restaurants are all open and serving up delicious food. The karaoke bar is blaring out music and La Crema, the towns best bar, is full of people waiting for a free table (ok this last one is only true on a Friday and Saturday night). 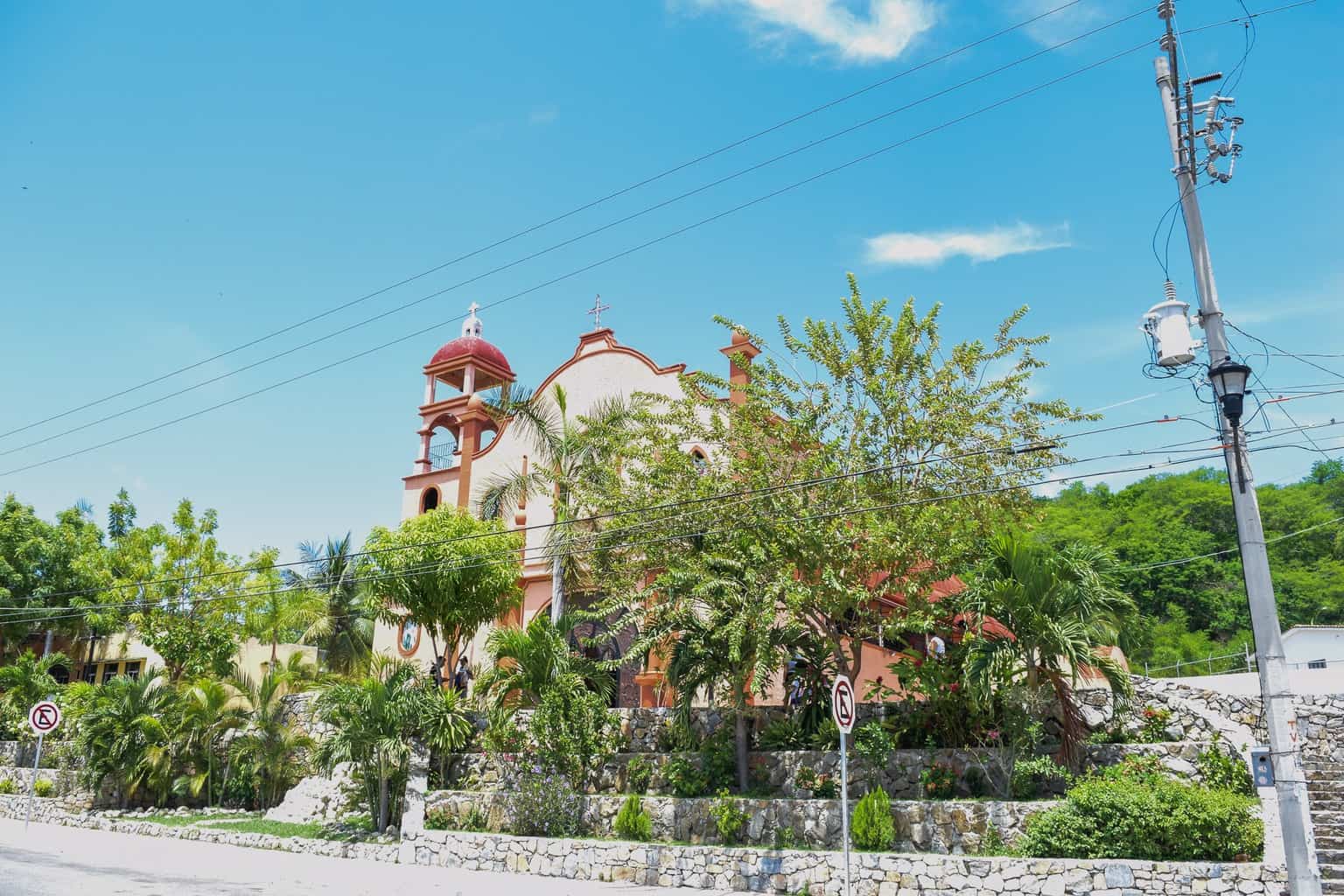 The church in the town center of La Crucecita

Visit the Ancient Ruins of Copalita

The ruins of Copalita are about a 15-minute taxi ride from La Crucecita. These ruins are small, but they still take roughly an hour to explore and you can even hire a guide if you want to learn more about each of the different buildings. While it’s certainly not as grand as some of the other sites around the country, or even indeed around Oaxaca state, it’s still worth it if you enjoy mesoamerican history at all.

Entry to Copalita costs 80 Pesos per person and about 100 Pesos each way in a taxi. You can explore the ruins, go through the museum which has relics found around the site, and then follow the paths through the jungle all the way to the coast. On one side is a beautiful river and directly in front is the Pacific Ocean in all its wild and roaring glory.

I made a video about my experience at Copalita which you can watch here. 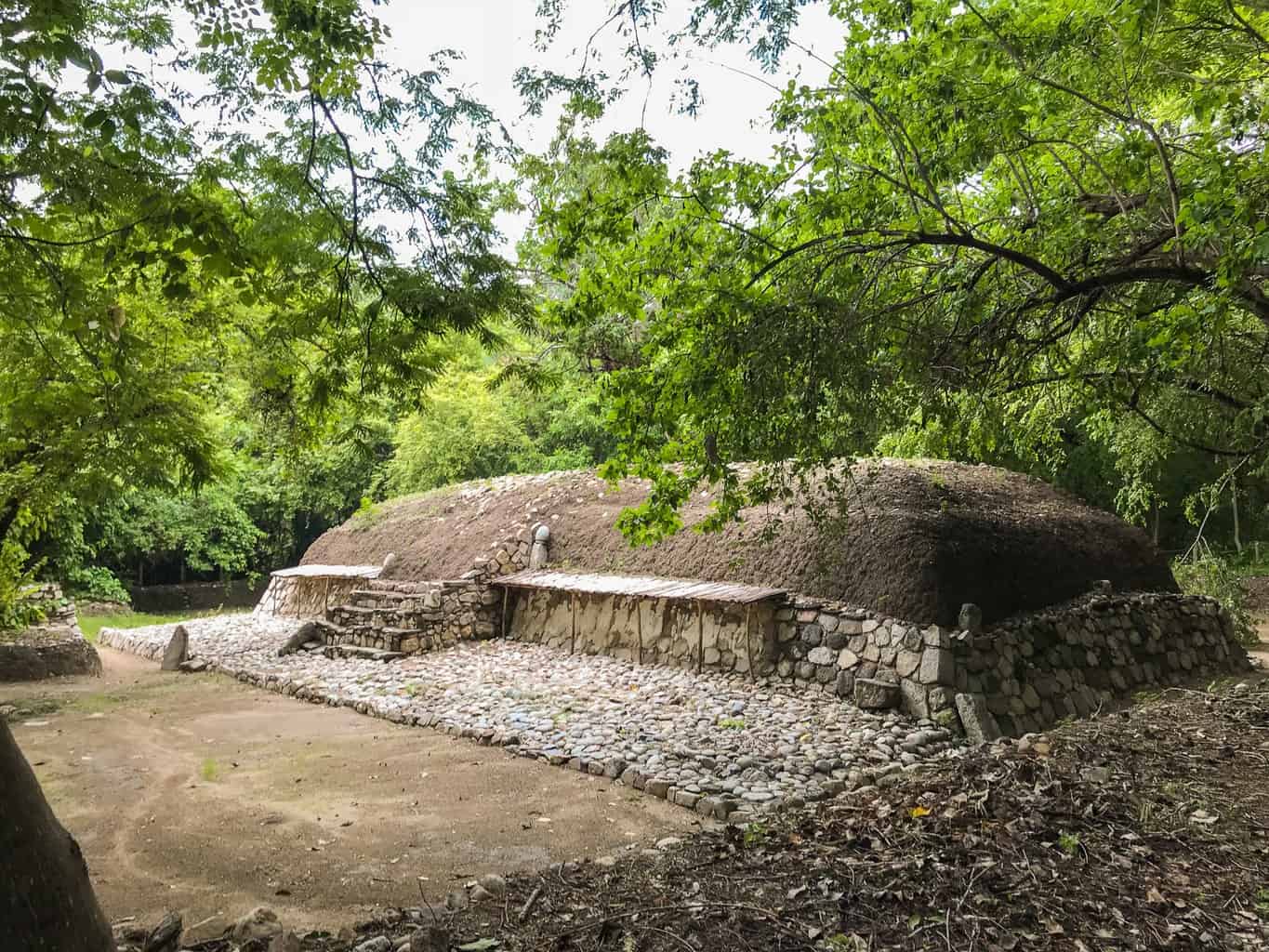 Take a Tour of a Coffee Plantation & Waterfalls

If you look up tours in Huatulco, this is likely to be your most popular search result. There are a lot of tour companies in La Crucecita where you can book this tour. It includes a stop at at least one waterfall where you can swim beneath the falls. You then carry on up into the hills and jungle where the weather is usually wet and dreary until you get to a local coffee plantation.

Much of the coffee that you see around Mexico that comes from Oaxaca tends to come from this region of the state. The climate in this jungle-like zone is perfect for growing coffee and many of the farms here are still doing it the way they’ve been doing it for generations. You’ll be able to explore some of the coffee fields where the plants grow and then see the different stages of the process. You’ll then, of course, get to sample a few different cups of coffee from the beans of that farm. 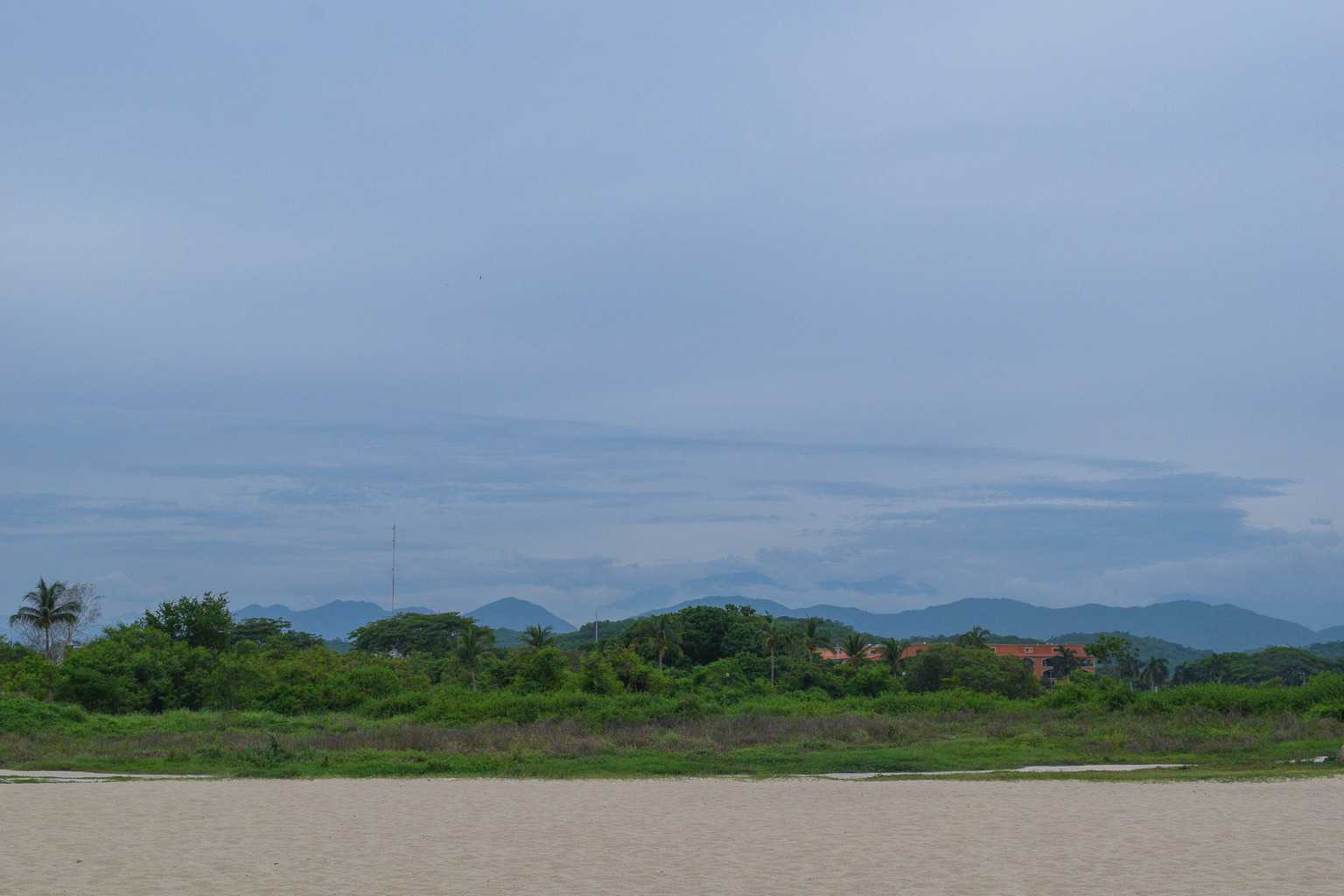 Go on a Boat Tour of the Bays

This is one of the best ways to explore the different bays, especially those that you can’t reach by taking a taxi. It’s also a really fun way to get around. Every boat sort of does something different, but the majority of them leave from Bahia Santa Cruz, either straight from the beach or at the pier near the parking lot (it’s right behind the taxi rank).

Boats run pretty much all day long until just before sunset, so you can simply show up at the dock when you want to take a tour and pay. Prices vary depending on how many bays you want to see, whether you want to share a boat with other strangers, and if you want to snorkel along the way.

The typical trip is a private boat tour that costs about 2500 Pesos (about $125 USD) per boat, not per person, which makes this particularly great value if you are a group traveling together. It starts at Marina Santa Cruz and goes all the way to Bahia San Augustin with two stops for snorkeling. You’re usually free to bring your own snacks and drinks. You may be able to negotiate the price of the boat a little bit and many of the people at the docks speak both English and Spanish. 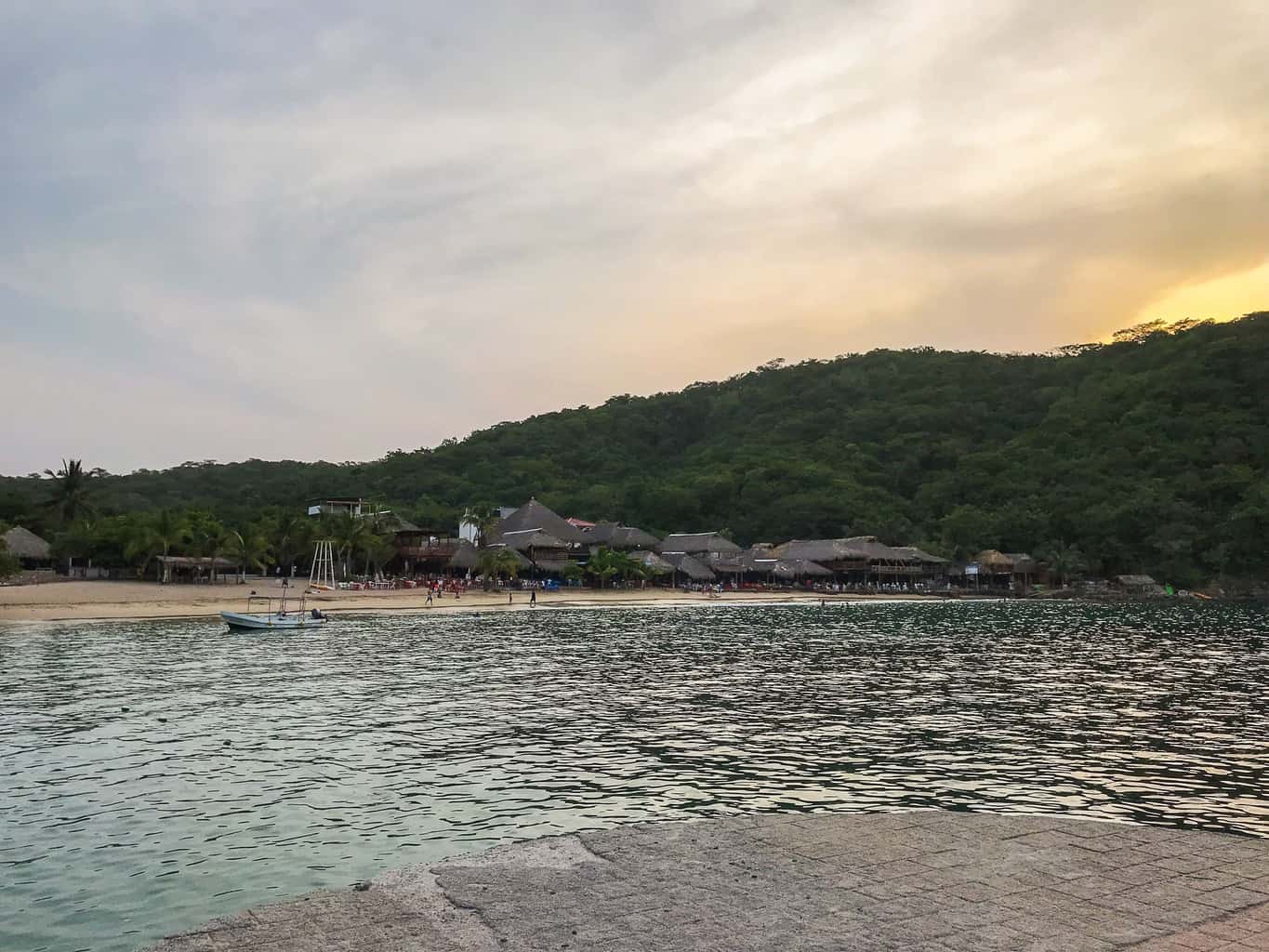 One of the best things about taking a boat tour in Huatulco is that you can get to the hard-to-reach beaches where you’ll be one of only a handful of people walking the sand.

These two things are available at almost every single beach. I saw them at Tangolunda, Santa Cruz, Entrega, and Maguey and they are very reasonably priced. You can spend as little as 50 Pesos (about $2.50 USD) on a jetski ride and you can either ride it yourself if you are experienced, or you will ride it with the person who runs the tours (they will be the driver). It may cost more to self-drive the jetski.

The banana boats are just small little inflatables that seat about 5-7 people. You hold on and the inflatable is towed by a small speed boat. They usually take you just outside of the bay and do a loop before coming back. The trip lasts no more than 10 minutes but is a fun ride for kids and when you get back into the bay they tip the boat so you fall into the water.

It’s required by law that anyone out on the water whether on a jetski or other type of boat, must wear a life jacket. 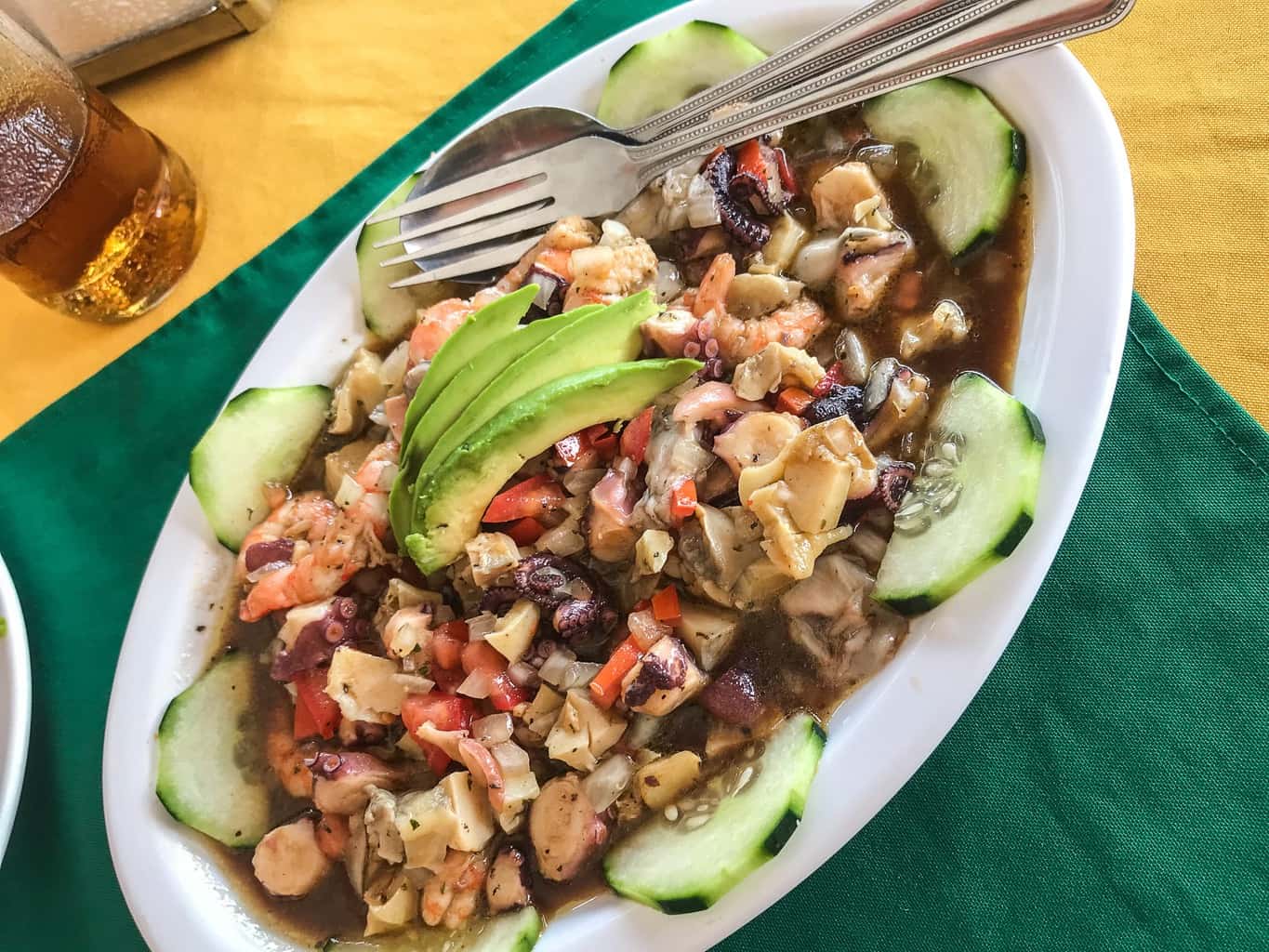 Eat All the Seafood

The seafood in any coastal town in Mexico is always worth checking out, but I found the seafood in Huatulco to be particularly delicious. Beaches like Santa Cruz, Maguey, and Entrega all have restaurants that line the sand. Simply choose a table and they’ll rush over to bring you a menu and take your drinks orders.

I like this setup, which is popular in most Mexican beach towns, because you can order a few beers and then sit under the umbrellas and on the chairs for free. All of these restaurants serve up ceviche, grilled fish, fried shrimp and some even have lobster.

In the downtown area of La Crucecita, there is also a really great little seafood restaurant that I highly recommend, Los Portales. It’s right on the corner of the main square and they serve up some of the best ceviches I’ve eaten in the entire country.

For the best shrimp tacos on the country’s west coast, get yourself over to Fish Chef. It’s a small little restaurant just off of the main street that connects La Crucecita to all of the beaches. If you find Chedraui, the main supermarket, just go across the street and you’ll see the Fish Chef. By night it’s a good spot for meat tacos, but for lunch, better fried shrimp does not exist in all of Oaxaca.

In addition to delicious seafood, Huatulco also has plenty of other options that you won’t want to miss. Oaxaca is famous for its cuisine and you can sample some of the more popular Oaxacan dishes here. The dish you’ll see most around La Crucecita is the Tlayuda. Tlayudas are a large, flat, thin tortillas that are stuffed with refried beans, cheese, and a meat of your choice. It’s then folded in half and roasted over charcoal so that the cheese becomes lovely and gooey and the tortilla becomes crispy. It’s delicious. 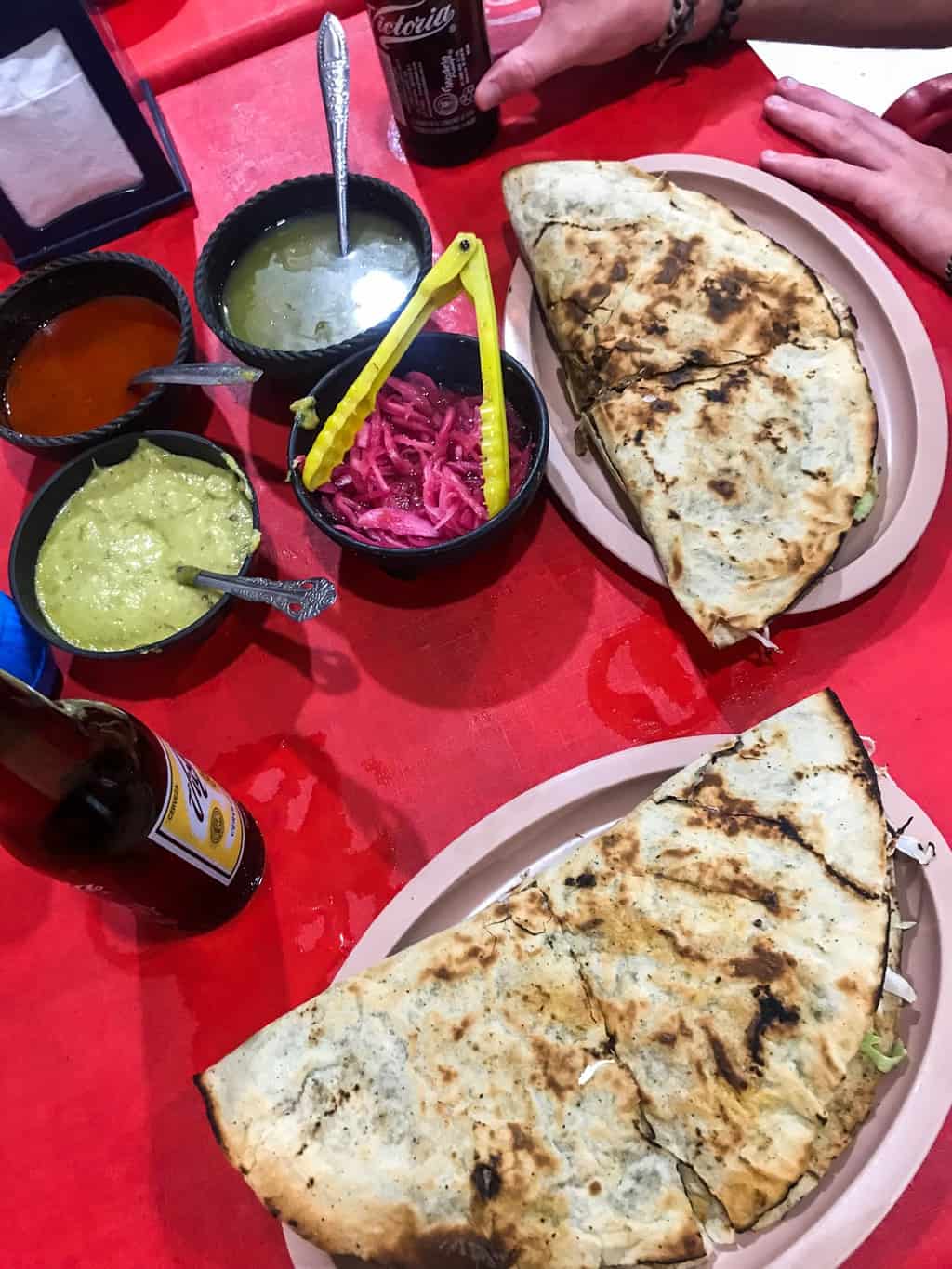 The delicious tlayudas that we had in Huatulco

Spend the Day in Zipolite

This infamous beach town is a very popular day trip from Huatulco. I say infamous because it’s known best by Mexicans as a nude beach, even though only a very small portion of this beach is clothing-optional. It takes about an hour and 15 minutes to get from downtown La Crucecita to the main beach area of Zipolite.

The town is growing quickly and is starting to be considered an alternative to the bigger beach town up the road, Puerto Escondido. Zipolite is also popular with international surfers who come and once or twice a year hosts surfing tournaments.

If you have rented a car, it’s easy to get here. Alternatively, almost any taxi in Huatulco will take you there on a day trip. Be sure to negotiate the price because they usually start quite high. 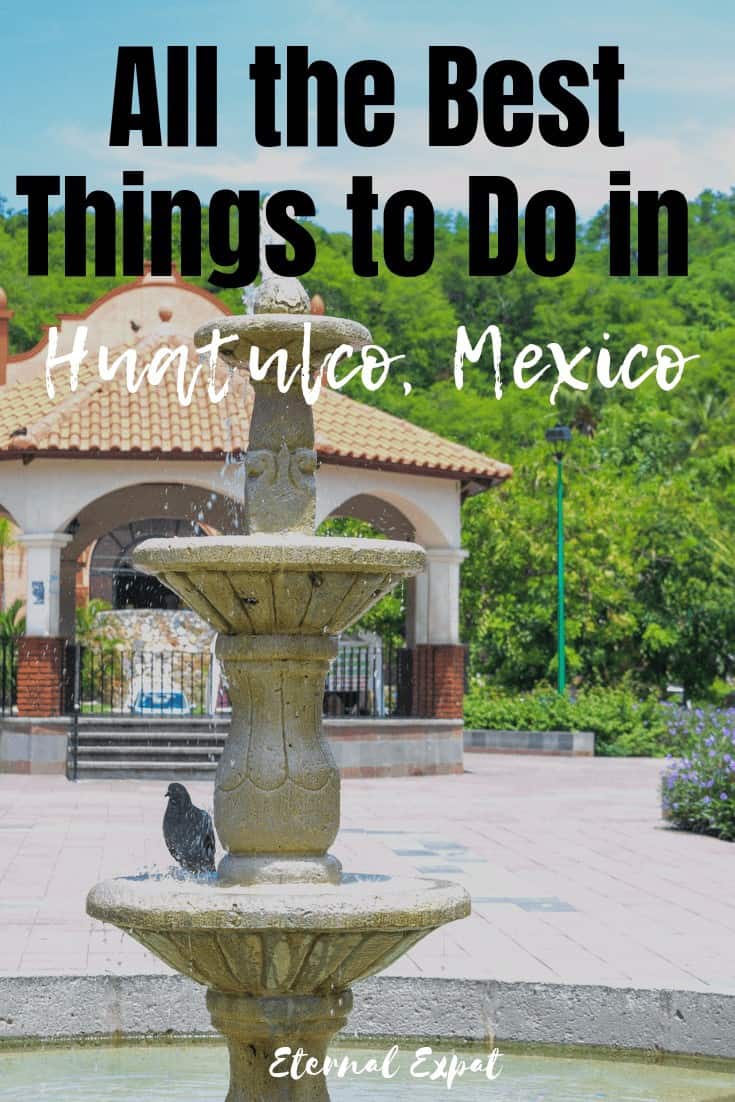 Hi, Many years ago I lived in Oaxaca city and loved it. I went to Huatulco in 1960, I liked Huatulco, but I don’t remember much about it. I was wondering if one can live there full time? Can I fly there from Oaxaca city? If so, how many people live there there now? How much would it cost a month, more or less to live there now? I’m an artist and my husband is a writer, we’ve lived in some out of the way place’s and loved them. I speak fluent Spanish. Any info. would be much appreciated. Thank you.