I recently learned about a little town about 45 minutes away from Mazatlan called San Marcos. It has a pretty interesting story.

While you can go to San Marcos on your own with a car, we headed there with Blue Foot Tours. They picked us up at our Airbnb in Mazatlan, took us to the town, told us stories of what happened, why it’s so deserted, and even about the three families who refused to leave.

We then headed out on the nearby waterway to kayak at sunset. It was magical to watch the sun go down over the surrounding Sierra Madre.

We finished with a meal at Doña Carolina’s house. She invited us into her outdoor kitchen where she has a huge comal over an open fire and where she made us the best tortillas I have ever had in my life (and that’s after four years living in Mexico and eating A LOT of tortillas!).

You can book this specific tour here.

But let’s get back to the fascinating story of San Marcos.

What Happened to San Marcos Viejo? 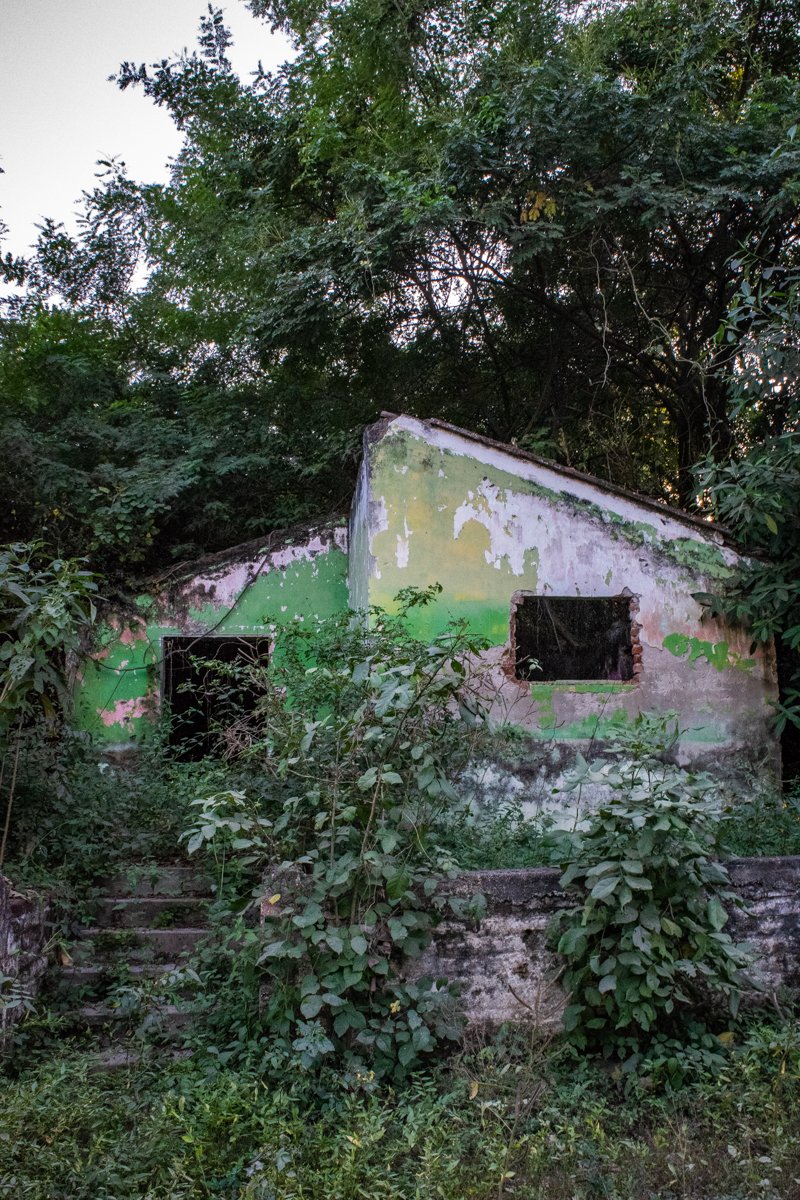 Our tour guide told us that there had been whispers of a dam being built around San Marcos for almost 100 years. No one ever thought it would actually happen.

Picachos dam wasn’t meant to ruin this town, it wasn’t in the plans, but most people knew that if they went ahead with building it, the town would eventually flood. San Marcos wasn’t the only town to be devastated by the dam, however, it became the most famous.

Six communities in total were ruined by the flooding of the Picachos dam and 800 families were displaced from their homes, many of whom had lived in these places for their entire lives, for generations. 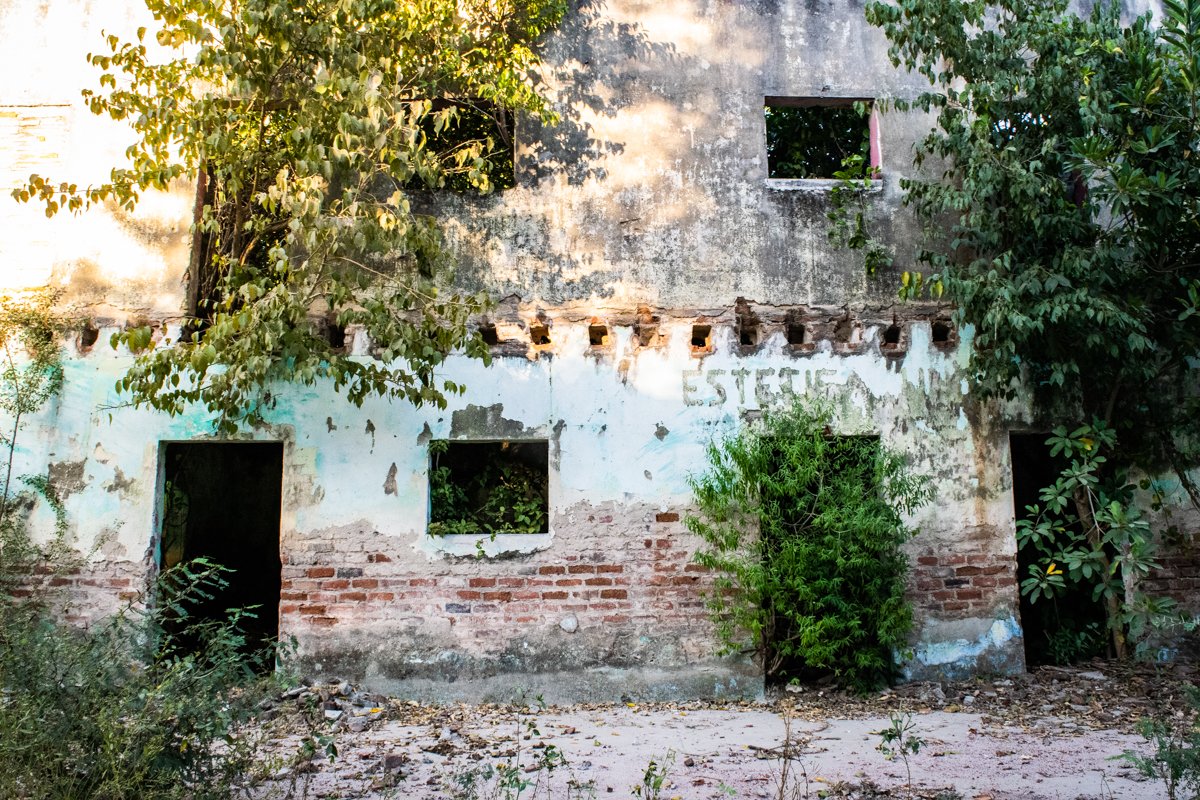 It’s incredible to walk through the deserted town. Through the windowless buildings with plants growing through the tiled floors, roofs long gone, and trees flowing in from above.

I imagine it’s what it feels like to walk through Chernobyl, although I’ve never been.

There are still signs on the outside of the buildings. Faded Coca Cola logos and cows on the side of the old carnicería.

But it was only 10 years ago that, nearly in the middle of the night, the streets filled with water, homes flooded, and people were forced up to higher ground. The damming caused flooding so severe, for several years you could actually take a boat through the town’s main streets. Even now, during the rainy season, the streets fill back up with water after heavy rain. 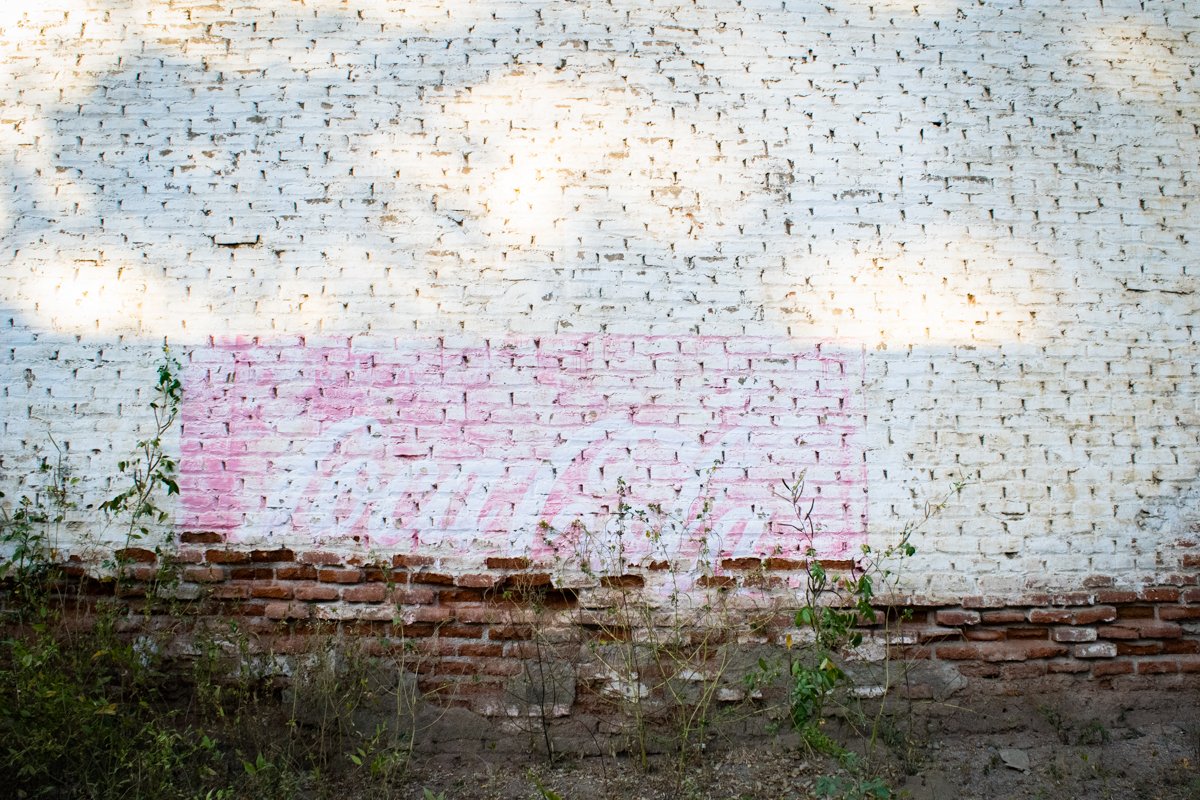 Where Did Everyone Go?

Shortly after the flooding happened, a new town was built with the delayed help of the government.

You now pass through El Nuevo San Marcos before you arrive at San Marcos Viejo.

Most of the people who lived in San Marcos moved into the newer town and rebuilt their lives there. Some families left the area altogether and headed to other towns or to the big lights of Mazatlan or Culiacan. 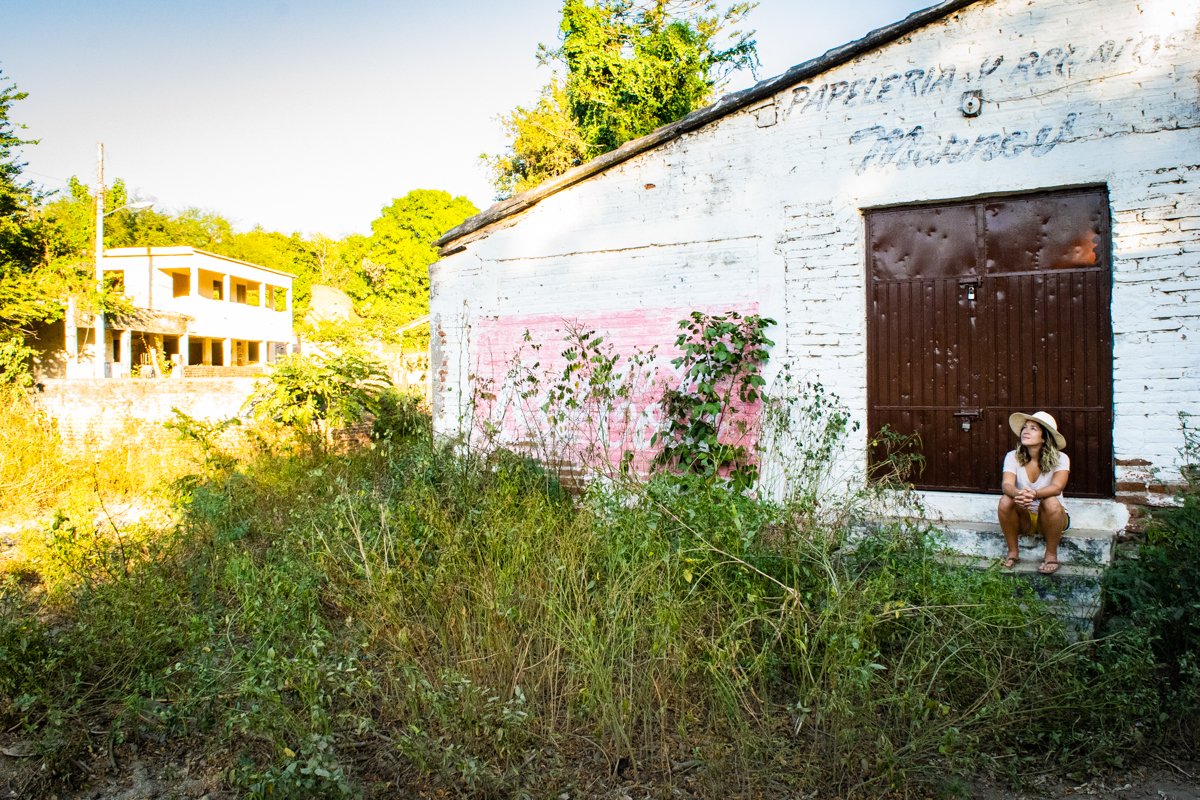 Their stories are something of folklore now around Mazatlan and the towns surrounding San Marcos. There’s even a documentary about them which you can watch on Amazon called Los Reyes del Pueblo que no Existe or in English, it’s called the Kings of Nowhere.

The story that sticks out to me the most is that of Cipriano Osuna. Pani, as he prefers to be called, didn’t even think about leaving the town, which has been his family’s home for generations.

Every day he heads to the local church, which no longer has a priest or parishioners, and he cleans it. He maintains the property just in case anyone wants to come and worship. He turns the lights on, he paints the exterior, he even celebrates mass here each year on the anniversary of his father’s death.

Imagine such dedication to a place? Imagine the heartbreak of seeing it deteriorate each day even as you do your best to scrape off old paint, sweep the leaves out, clear it of mud after a recent flood.

You can read about the rest of the families that remained in the town in this BBC article. 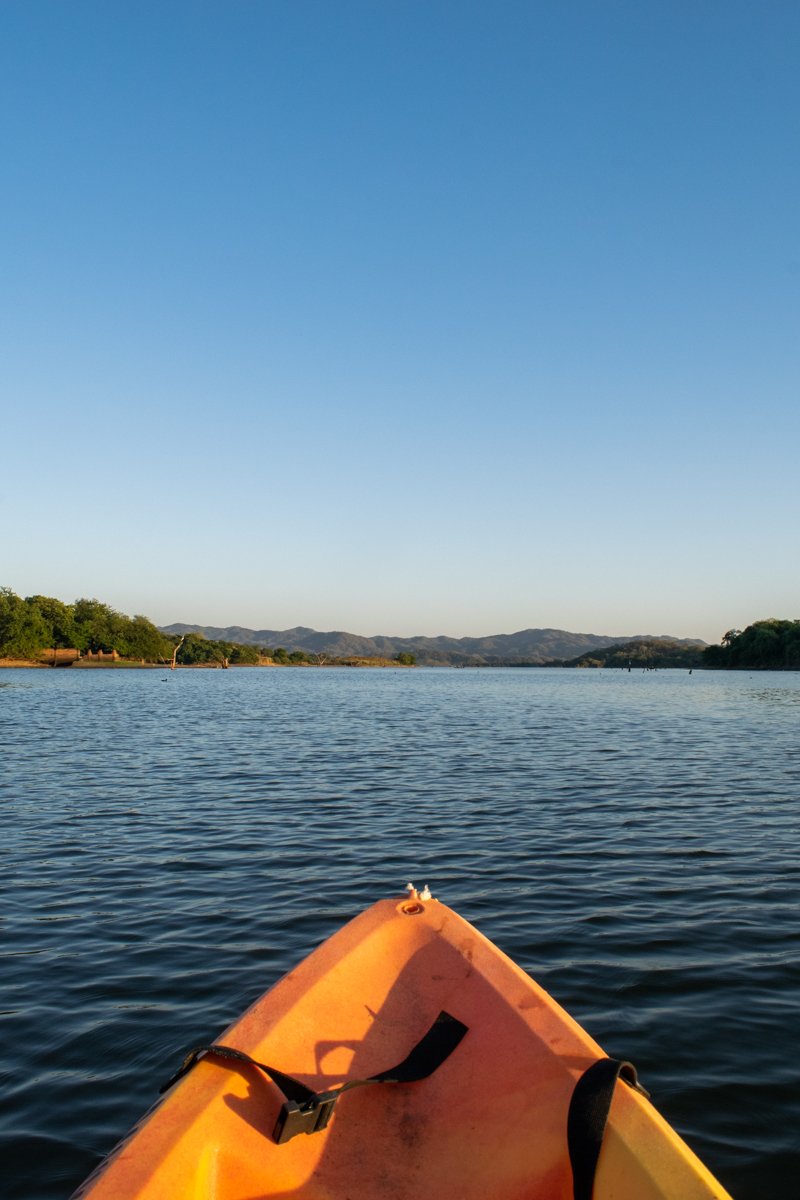 These days, the waterway that was created by the dam is a popular spot for fishing and kayaking.

The water is so flat and calm. We kayaked for over an hour with almost no effort.

A few of the people on the tour hopped out of their kayaks and went swimming. On a hotter day, I probably would have joined, but years of living in Mexico has made me an absolute wimp in the cooler weather. The water is incredibly cold and since the sun was setting, it wasn’t particularly warm enough to dry quickly. 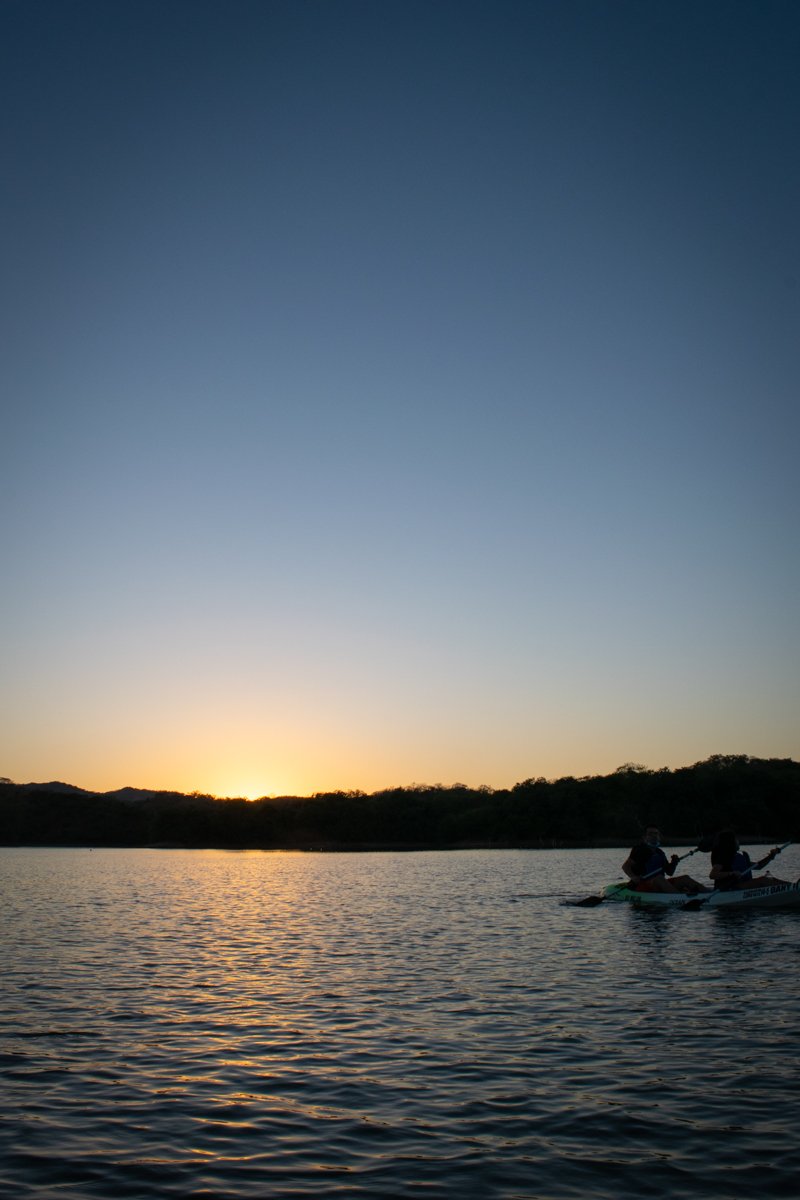 If you want to learn more about San Marcos and take a beautiful sunset kayak trip, I highly recommend booking with Blue Foot Tours. They also run other excursions around the Sierra Madre region like hiking and mountain biking options.

We finished the day with a meal at Doña Carolina’s house. She set up a table in her outdoor kitchen where a huge comal sits over an open fire. Her chihuahuas were curled up at the foot of the flames to warm up on such a cool November evening.

They were probably also hoping for some of her famous beans to fall to the ground for a little snack.

The meal was simple yet utterly delectable. Fresh cheese, beans that have been cooking all day long, chiles torneados, a little bit of machaca, and the best tortillas I have ever had. Even the Mexican family who was on our tour with us was obsessed with her fresh masa and the piping hot tortillas. They asked her if they could take some home to have with breakfast the next morning. 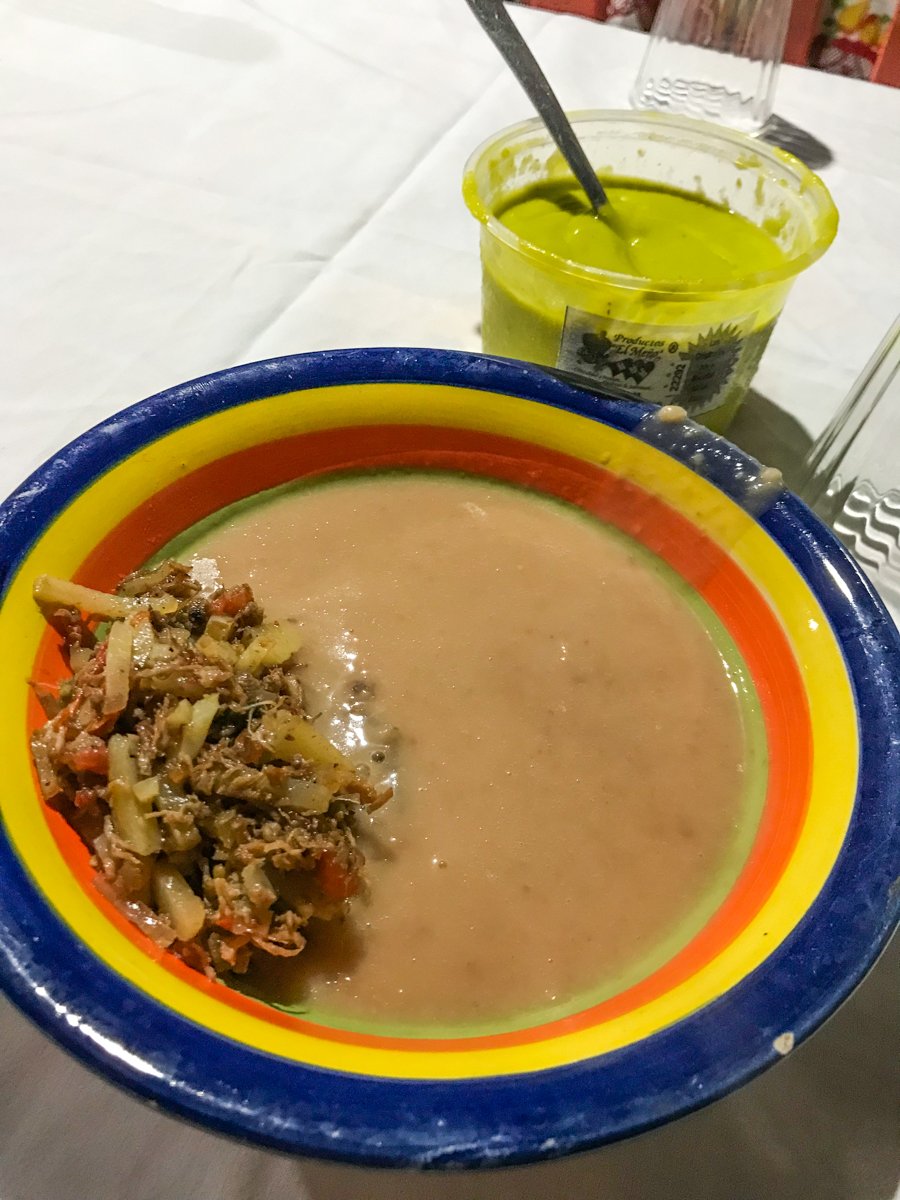 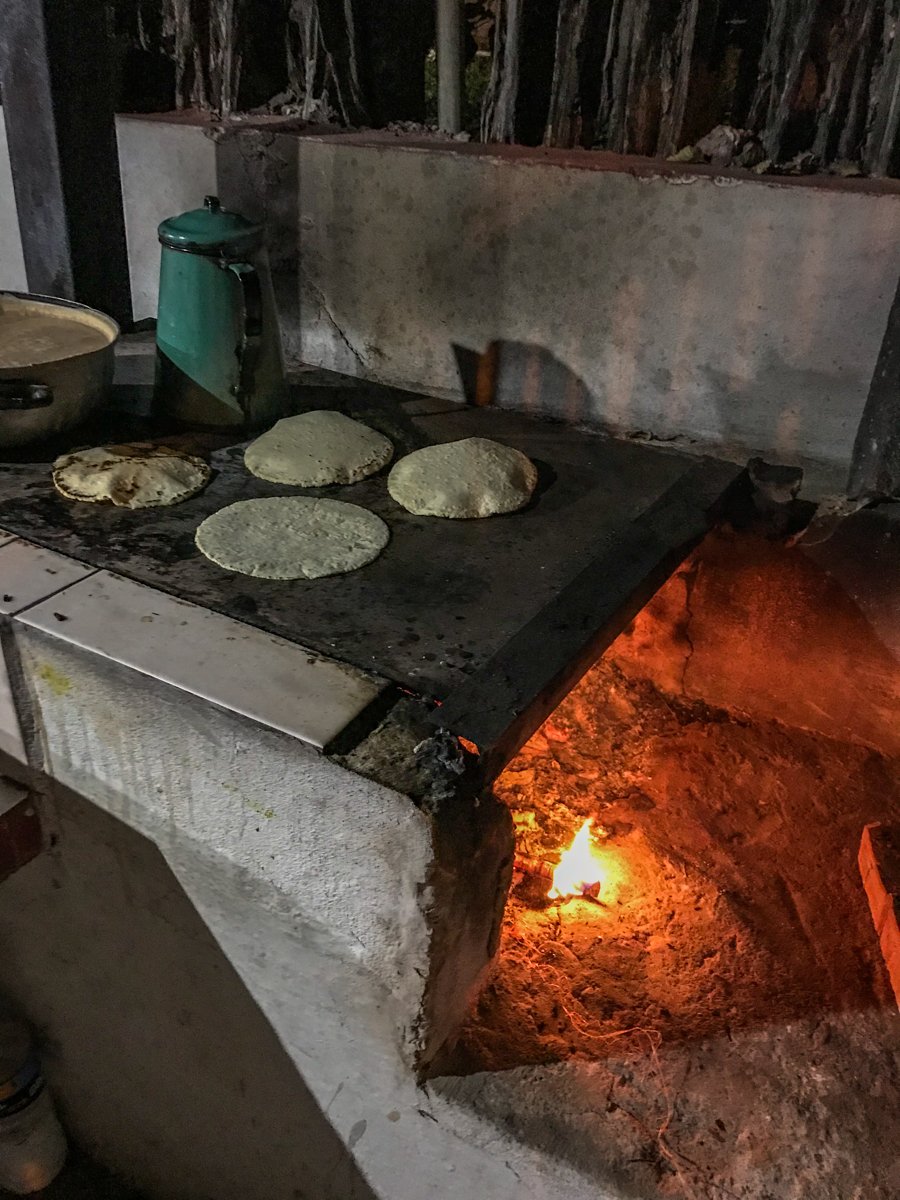