There are so many amazing bars in Kaunas, Lithuania. If you love a bit of nightlife, whether it’s a cozy pub, a great craft beer, a nice cocktail, or even a busy spot to dance the night away, there’s a little something for everyone in Kaunas.

Kaunas nightlife perhaps doesn’t beat out Vilnius bars in terms of volume, but I must admit I have a bit more fun on a night out in Kaunas.

These are all of my favorite places to enjoy a few drinks around town that I have discovered. It’s a solid combination of casual bars where you can have both food and drinks as well as a few places that are mainly places just to drink.

There is also a wide range of prices, but for the most part, these tend to be on the more expensive scale of things. I haven’t found any really cheap bars around Kaunas, but they won’t totally break the bank either, especially if visiting from somewhere north or west of here.

If you’ve never read one of my guides before, I always like to add the Google location at the bottom of each recommendation.

I tend to pin all of the best places to eat and drink on Google Maps so that when I am out exploring for the day and I get hungry or, in this case thirsty, I can open up the Google Maps app and simply see where the nearest bar is without having to randomly choose somewhere that might not be great.

So with these links, you can simply click on them and it will open up in Google Maps. Then you can save them to your own map and do the same thing when you are out exploring Kaunas!

Don’t forget to check out the best restaurants in town and the best things to do in Kaunas while you’re here as well! 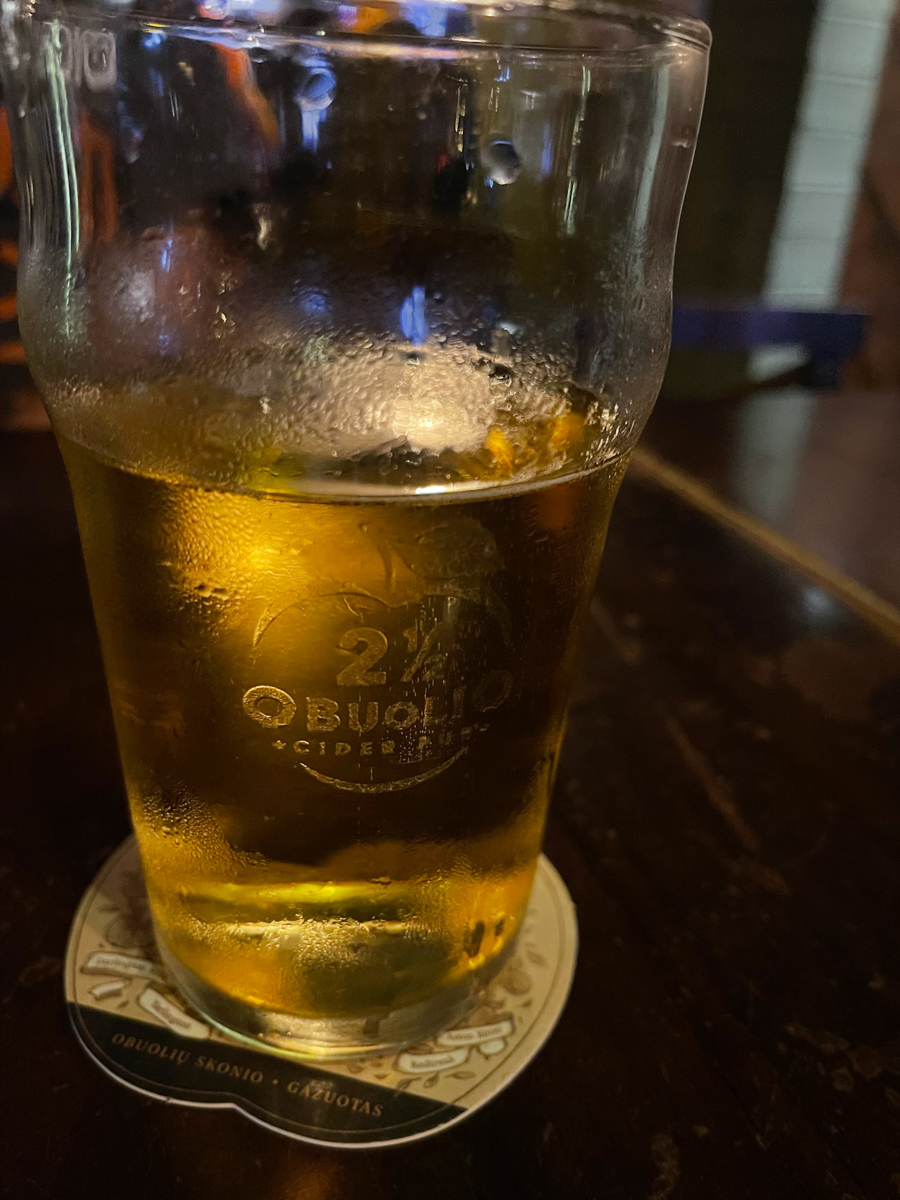 The delicious cider was so good I couldn’t even manage to take a picture before drinking at least half of it!

If you like cider, then this is the bar for you. Even if you don’t like cider, but you like a great atmosphere, I highly recommend this bar.

I don’t really love hard cider, but as I was walking past and peeking inside to see if it was busy, a group of people who were having a smoke outside told us that this was the best bar in Kaunas and we had to go in for at least one.

We stayed for several. They make their own cider which is tart and light and refreshing on a hot summer evening. They also have a few local beers on draft and tons of beers in bottles. They have a full bar and can make cocktails and mixed drinks and they were serving up plenty of shots to groups throughout the night as well.

If you get peckish while you’re drinking here, they have a nice bar menu of excellent fried bread with cheese (a Lithuanian specialty!) and some seriously good hot dogs. 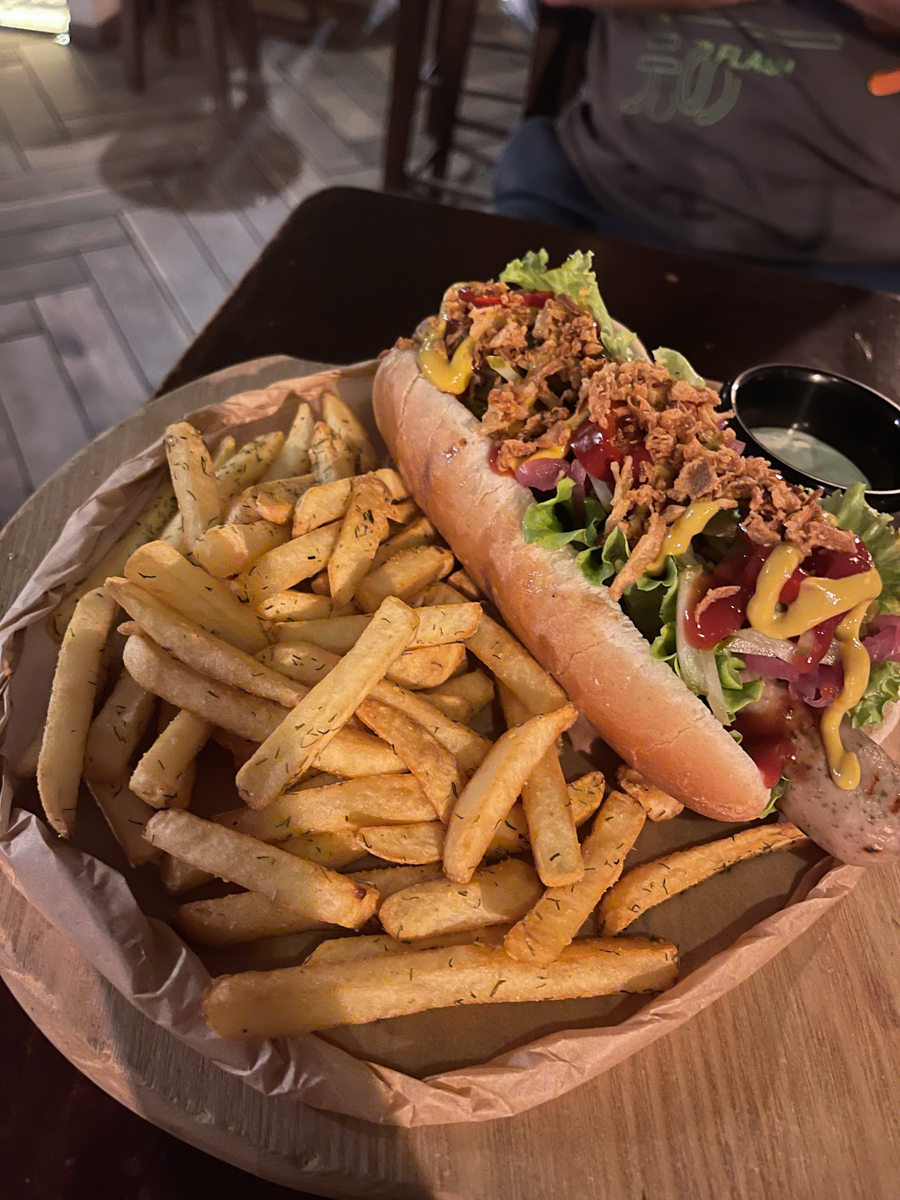 The hot dog and fries that I got for a bargain of €5 at the cider bar. The hot dog is seriously good quality and much needed after a few ciders!

I actually stumbled upon this place on my first trip to Kaunas totally by accident. I was wandering around the main square in the old town looking for a busy place to drink and I strolled past this bar that had several people outside and tons of people around the bar.

I walked in and discovered that they had a huge selection of craft beers and plenty of cheap local beers on draft as well. I can imagine in the colder months this would be a tight squeeze inside, but when it’s warm enough to grab a barrel outside, this is one of the best bars in Kaunas. 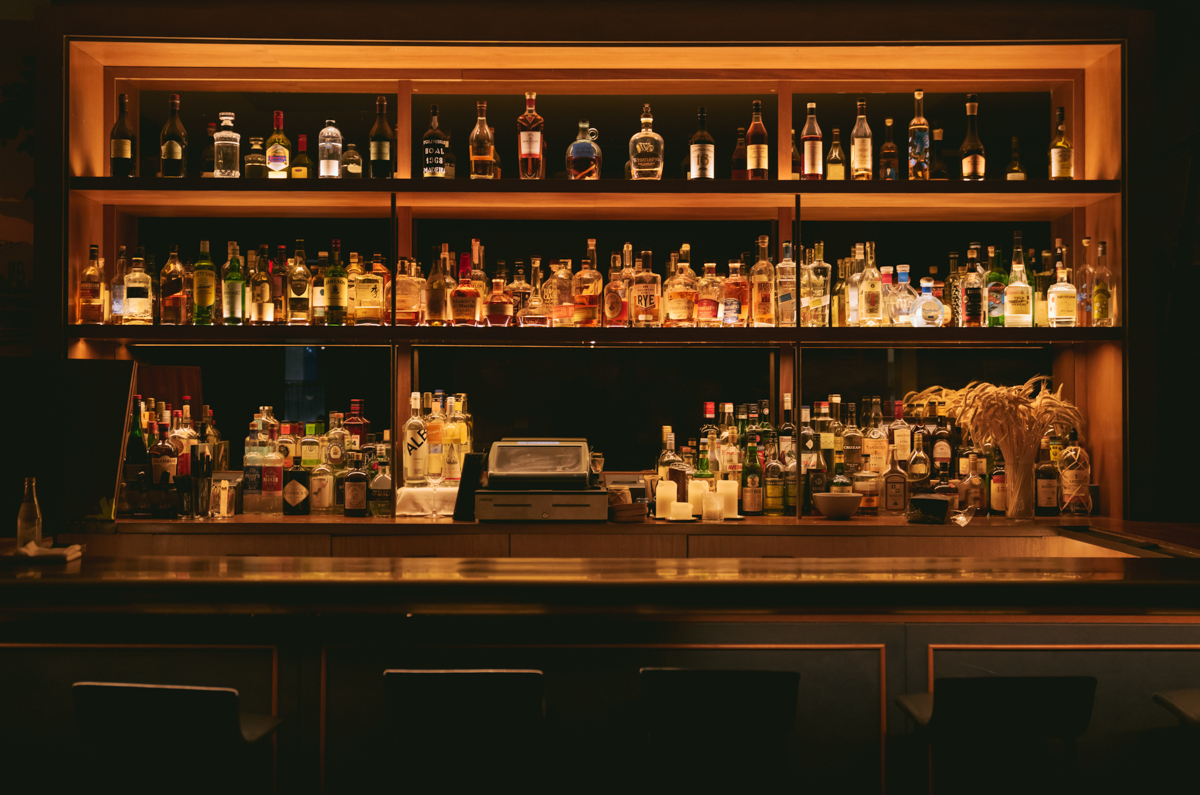 There are some seriously great cocktail bars in Kaunas.

This is a gorgeous little bar in the main square of the old town in Kaunas that I highly recommend checking out.

In the summertime, they have tons of tables outside in the plaza where you can have a drink and some bar snacks. However, unlike many of the other bars in this area, they also have a beautifully chic interior where you can sit and enjoy your evening beverages (or daytime beverages, you’re on vacation after all!).

The bar is housed inside a historical building and is named after Petras Klimas who was not only a writer and diplomat but also one of the 20 original signatories of the Act of Independence of Lithuania. He was a sort of a founding father of Lithuania.

The reason I would come here is for their exceptional cocktails. However, they also have beers on draft and a small, but nice selection of wines. 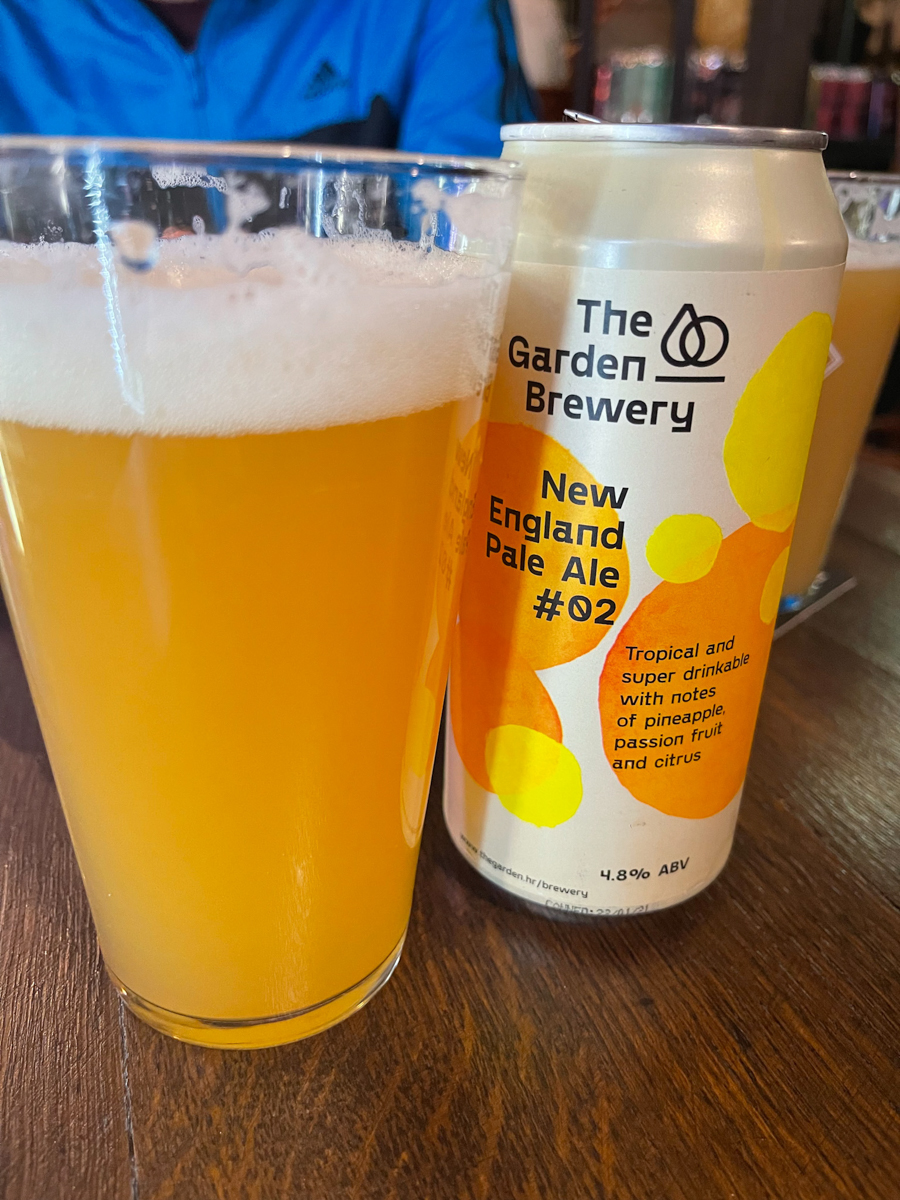 Nisha Craft Beer Bar has so many beers to choose from, it’s almost overwhelming to choose! The bartender has a lot of knowledge and can help you narrow it down, thankfully!

Craft beer and dive bar lovers should not miss having a drink at Nisha.

This is a tiny little spot, but it never gets really crowded (at least not that I’ve seen). It’s not the sort of place you come for ambiance, but they do have the widest selection of craft beers from around Lithuania and indeed this entire region of Europe.

I have had beers from Latvia, Estonia, Poland, and Norway at this Nisha location (there is also one in Vilnius and one in Klaipeda).

Hop DOC is probably my favorite bar in Kaunas. This place has it all – a huge selection of Lithuanian craft beers, great food, knowledgeable and friendly staff, and lots of outdoor seating (and lots of indoor seating, too).

They make a pretty excellent burger and while it’s perhaps not the cheapest place for beers and food in town, it’s definitely one of the most enjoyable.

A small, but busy little craft beer bar, this place fills up fast on Friday and Saturday nights. It has a tiny little bar with several craft beer options on draft as well as a huge selection of beer and cider by the bottle.

In the summertime, it can be hard to get a table outside if you don’t come early enough, but as it starts to get chillier, you’ll still be able to prop up at a spot inside.

The bar staff are friendly and know a whole lot about the beers they have one draft, so if you aren’t sure what to choose, just speak to them about it. 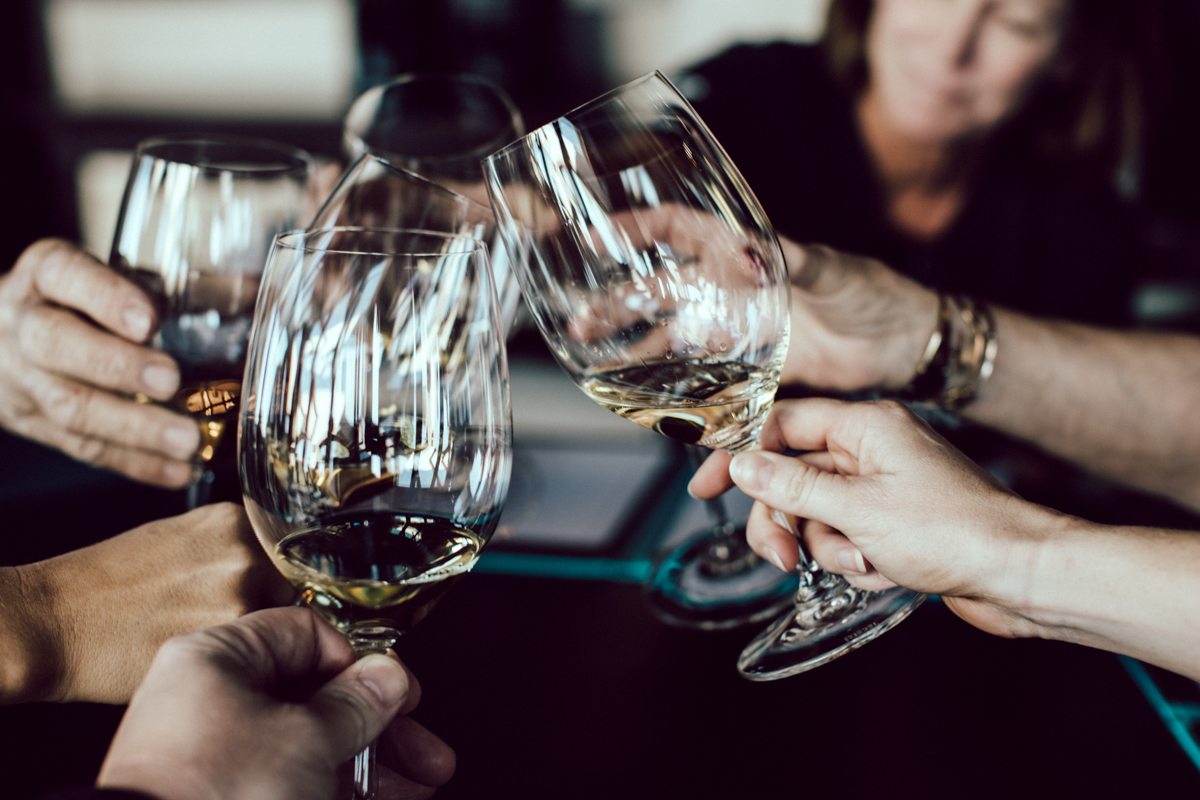 Most bars have a small wine selection, especially if they also have cocktails, but many of the beer bars in Kaunas tend only to have beer on the menu.

If you’re from the UK or you just love a good British pub, rePUBlic is just about the closest thing you’ll get to it here in Kaunas.

There are booths, plenty of seats at the bar, and a nice selection of beers, wines, and spirits to enjoy. They have a full food menu which is of ok quality. If you are simply looking for a place to have both food and drink and you want a burger or a schnitzel, this is a great option.

They usually have live music on the weekends and in the summertime, the bar pours out onto the street where there are tons of tables.

This cozy little spot is particularly popular with craft beer lovers (I tried to vary it up with different bars in Kaunas, but I have a weakness for good beer).

They have about 10 tables inside and in the summertime, there are tons of tables out in the beer garden. They have a huge selection of beers both on draft and by the bottle. There is a small food menu of mostly snacks like nachos and fried bread, but it’s really more of a beer bar than anything else.

Much like Nisha, they stick to a lot of regional beers with options from around Lithuania, Poland, Estonia, and Denmark. 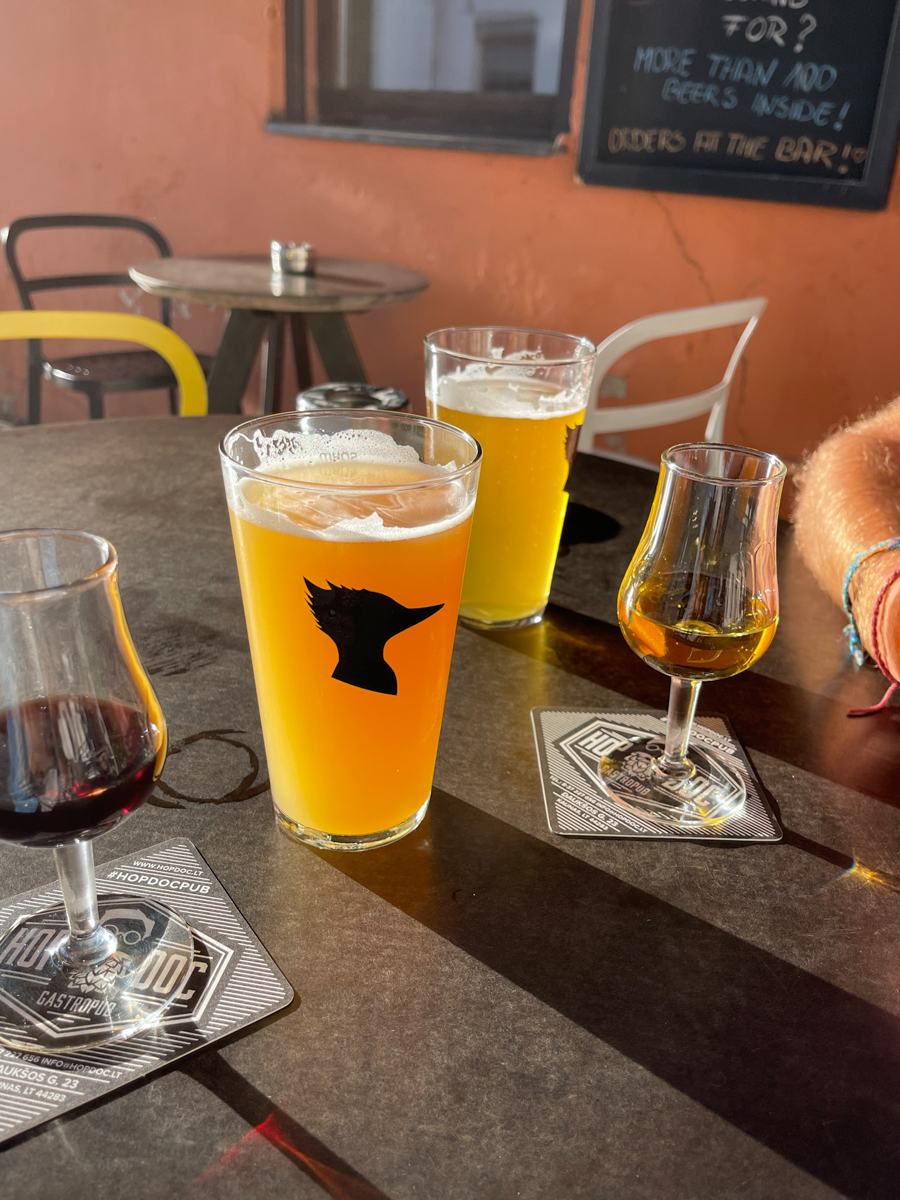 Having Genys beers at Hop Doc, both in Kaunas!

Genys is a local brewery in Kaunas that is making the biggest waves in the craft beer scene in Lithuania. If you go to any craft beer bar around the country there is a pretty good chance they will have Genys on draft (probably the Californication).

Their beers are popular for good reason, they’re delicious. And this location is their city center taproom where you can try not only their classics like the IPA, but also new beers that they are brewing up for the season.

There are tons of seats outside and a few inside. They don’t do their own food, but you can order pizza from their menu and it will be delivered by the nearby pizza place.

Another great bar in Kaunas for its ambiance. This place almost always has some live music or just some great music playing. They have a beautifully cozy indoor bar where you can warm up from the cold. And in the warmer months, there is a huge outdoor picnic area to enjoy drinks and food.

This is both a great bar and a fantastic place to eat. As the name suggests, you can eat some serious pork dishes here. The pork ribs are my personal favorite, but they also have pulled pork burgers, hot dogs (which are really made from amazing pork sausages), and pork loin with crispy potatoes.

They do have some non-pork options like fish and chips and a few vegetarian options.

They have a full bar with every option you could possibly want. This is the place to come with a group of friends or people who all like having something a little bit different to drink. There’s a nice selection of top and mid-shelf alcohols as well as plenty of beers on draft and by the bottle. 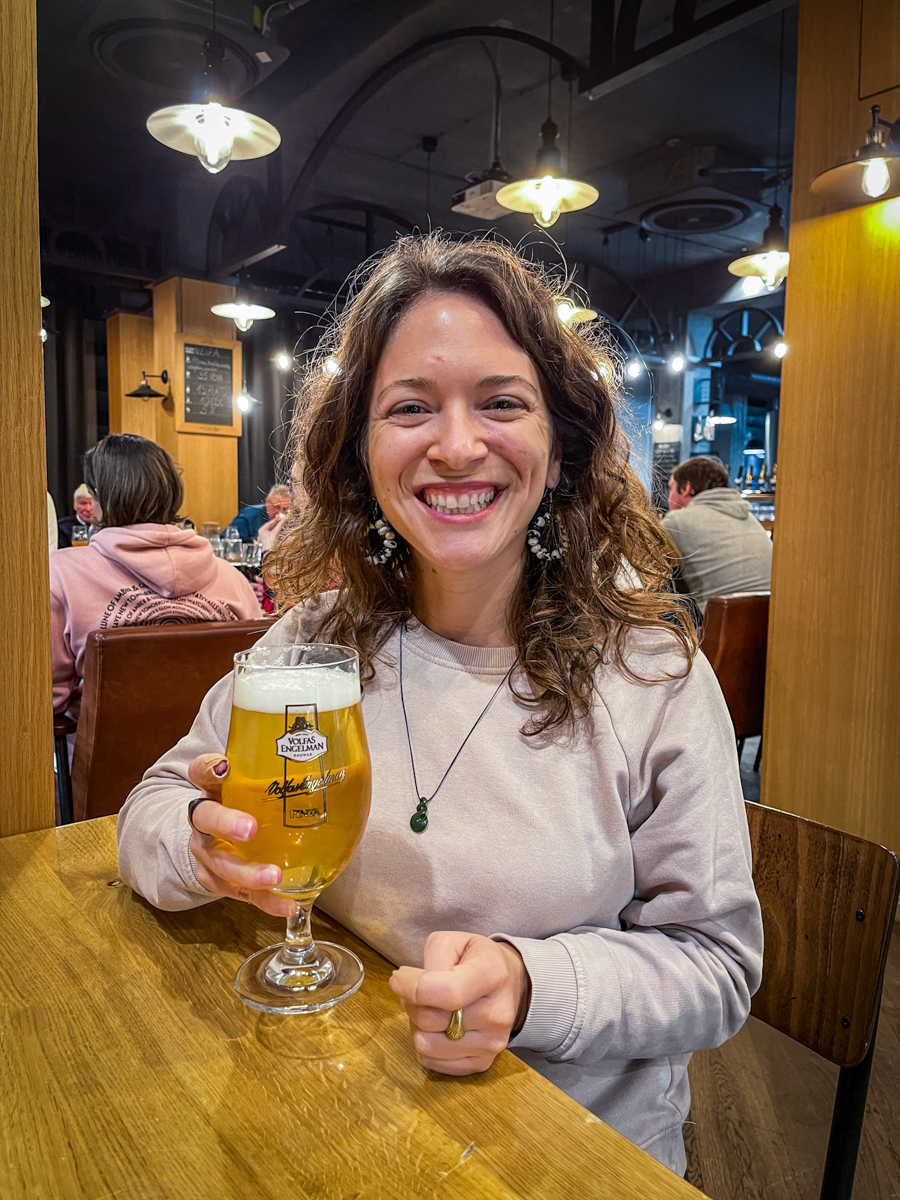 Volfas Engleman is one of the largest breweries in Lithuania and this “studio” bar is located right on the premises of the brewery. It’s one of my favorite bars in Kaunas, which is important since it’s kind of a trek from the downtown area of Kaunas.

It’s actually closer to the bus and train stations. This means if you have a late bus or train (those midnight buses to Warsaw are killer!), then this is a perfect place to while away a few hours and have some decent food while you wait.

It’s also a good place to head for a beer or two before going for food at HogMod which isn’t too far a walk from here.

The thing I love about this bar is that while you can buy cans of Volfas Engleman in any supermarket or shop around Lithuania, the beers they have on draft here are totally different. They have fruity stouts and tropical IPAs. They have chocolate porters and flavor combinations that I have never seen elsewhere.

It’s nice to be able to try beers that are only available here.