Just around the beach-laced curve of the Yucatan peninsula on its Gulf Coast side, are the lesser-known, and relatively untouched, beaches in Merida, Mexico.

Like Oaxaca’s beaches that undeservedly stand in the shadows of their northern cousins of Los Cabos and Puerto Vallarta, Merida’s beaches are often overlooked by beachgoers that opt for the beaches of the Riviera Maya instead.

Their loss, because some of the Yucatan’s best beaches are on the Merida coast.

What the beaches near Merida offer that Quintana Roo’s don’t are wide open white sands with far fewer foreign tourists, gorgeous emerald-toned water, and the highly likely chance of spotting not one flamingo, but colonies of these pink-feathered beauties.

Better still is the fact that all of Merida’s beaches are within easy driving distance of Merida city and accessible by public transportation too.

Whether you prefer tiny beach villages that still know how to cater to a tourist or an entirely off-the-beaten-path coastline with nothing but sand and coconut-laden palm trees, there’s a Merida beach on this list for you.

The Best Beaches Near Merida

These are the eight best beaches in Yucatan state. They are all within driving distance of Merida and most can be enjoyed as a day trip from Merida if you have a car.

Spending more time in Merida? Don’t miss out on the best things to do in the city here and the best restaurants here.

As the closest beach to Merida, Progreso’s white and wind-blown sands are some of the most crowded, especially during peak cruise season each winter. But don’t let visions of sparring for a spot on the sand stop you. Progreso is one of the widest Merida beaches, meaning there’s plenty of room for everyone to enjoy.

Snag a seat under one of the beachfront palapas for around 100 pesos for the day or bring your own shade for free.

The beauty of this beach in Merida is that it has equal parts laid back beach-town vibes and made-for-tourism conveniences like restaurants, beach clubs, and tours, something you’ll be hard-pressed to find at many of the other less developed beaches in the Yucatan.

Progreso is a popular spot for windsurfers and weekenders alike. Many Merida locals have second homes in Progreso, while the younger locals come for the beach parties on the weekends.

If you need a break from the beach, the El Corchito Ecological Reserve is located just offshore at Racoon Island. Swim in cenotes, book a boat tour through the mangroves and witness the island’s namesake scurrying around while you do. 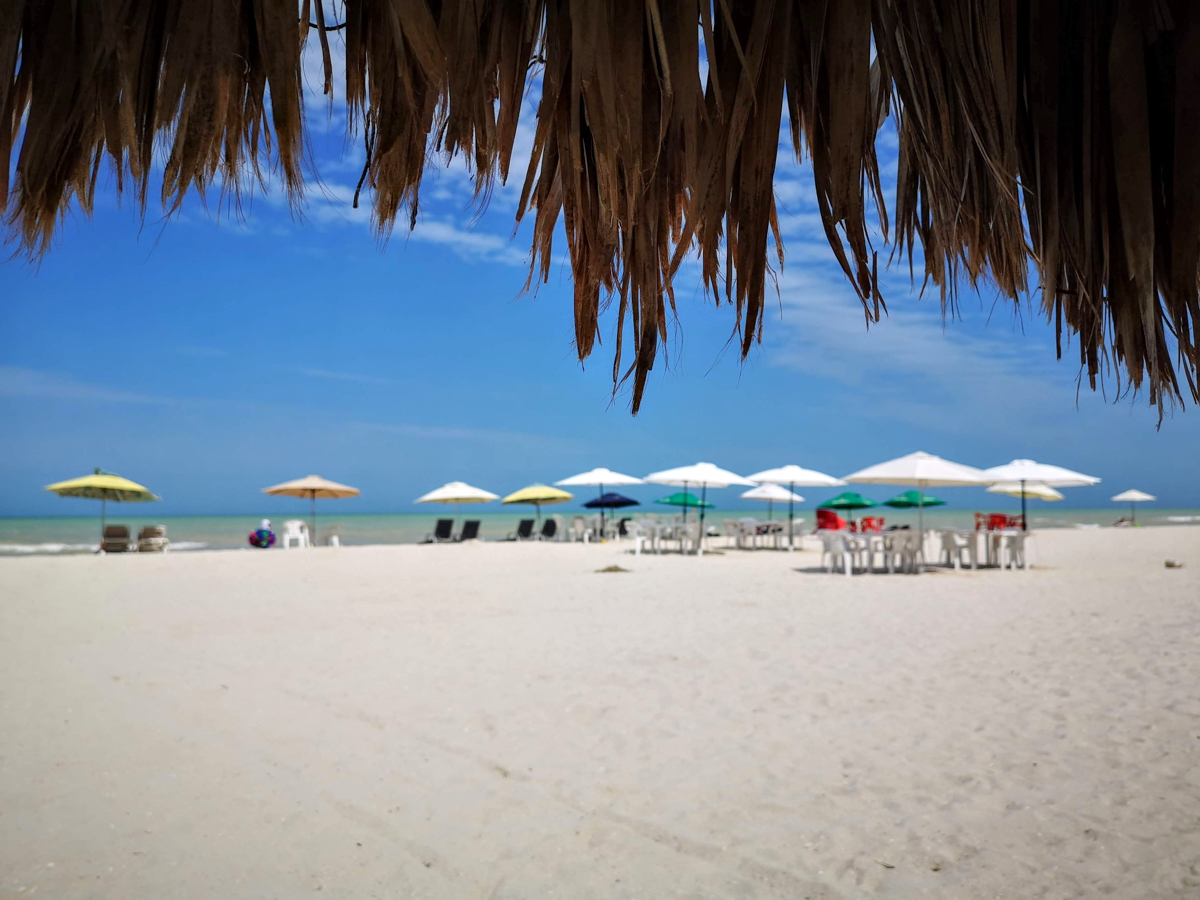 Playa Progreso is the closest Merida beach to the downtown area and the easiest to get to without a car.

One of Mexico’s pink flamingo sanctuaries, Celestún is far better known for its spindly-legged residents that fill the reserve just behind the beach by the tens of thousands. But its beaches too, are some of the best beaches near Merida, with pristine sands against emerald-hued Gulf waters.

Celestún’s two beaches – Playa Norte and Playa Sur – are divided by a long fishing pier, but are really just the same beach.

Of the two, Playa Norte has more restaurants, especially of the seafood variety, and amenities than Playa Sur, making it most beachgoers’ first choice.

In deep contrast to the cruise port crowds of Progreso, Celestún is a quiet and calm oasis by the sea, perhaps due to its slightly further distance from the city of Merida. It’s 90 minutes by private car and up to three hours by bus.

If you happen to be visiting Celestún when the flamingos are in town, usually from November through early March, take advantage and book a boat tour through the mangroves where the flamingos are sure to be found doing their mating dance.

It’s estimated that nearly 35,000 flamingos visit Celestún each year during mating season, before flying off to the beaches of Rio Lagartos for nesting and birthing. 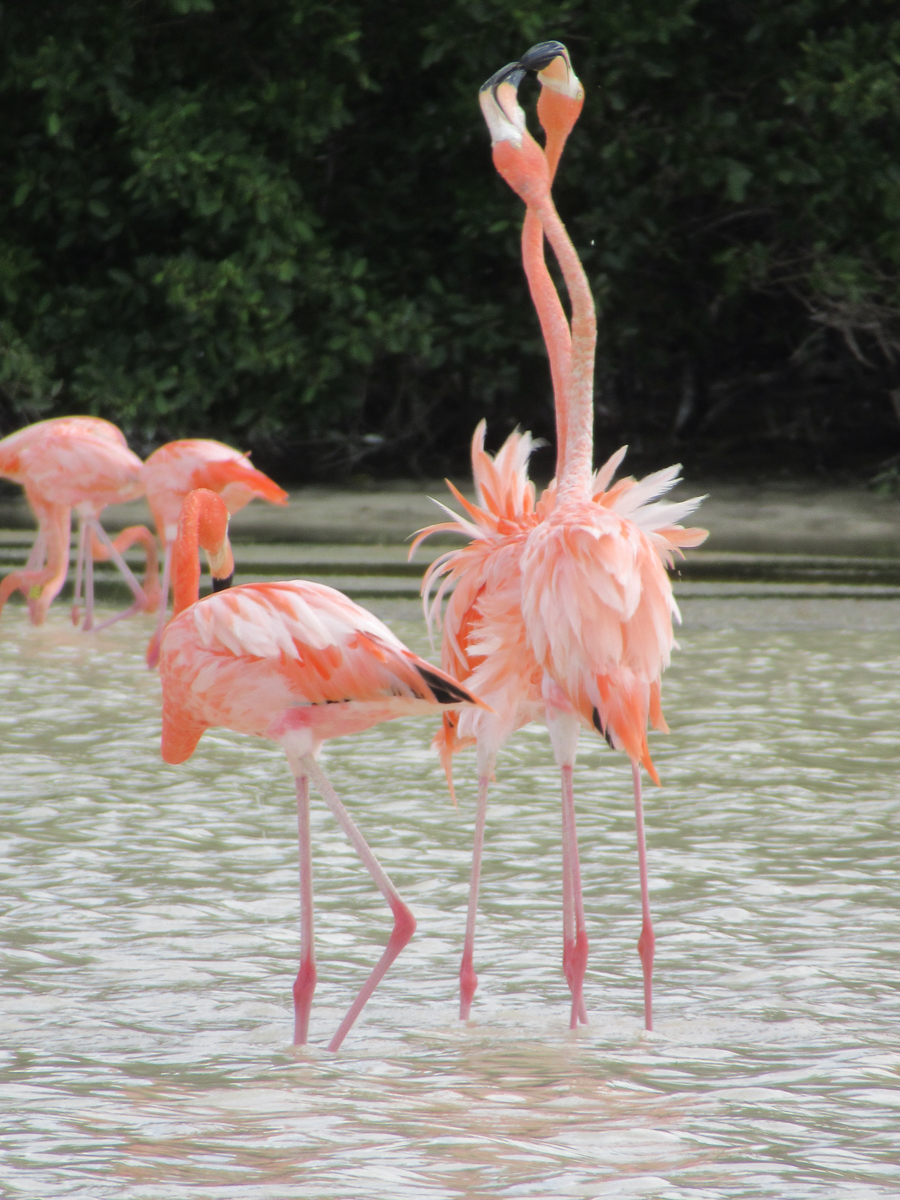 Flamingos at Celestún Beach near Merida.

If you’re looking for a Yucatan beach that still has a touch of what the Riviera Maya’s better-known beaches bring, El Cuyo is definitely the Merida beach for you.

Situated at the far eastern edge of the Yucatan peninsula, El Cuyo is basically on the border with Quintana Roo and exactly where the Gulf of Mexico meets the Caribbean Sea.

Many consider El Cuyo to be the Yucatan’s most beautiful beach, with infinite white sands and enough of a tourism infrastructure in place that you feel well taken care of during your day (or few days) of sunbathing, swimming in the ocean, or kiteboarding, a popular pastime on this stretch of coast.

At three and a half hours from the city of Merida, El Cuyo is more than a day tripper’s beach. Spend a night or two and soak up the laid-back beach town atmosphere.

Then, make the most of your visit by checking out the nearby Las Coloradas pink lakes. Besides the stunning magenta hues of the lakes, you’re also likely to spot several colonies of flamingos if it’s the right time of year for it (usually from March through June). 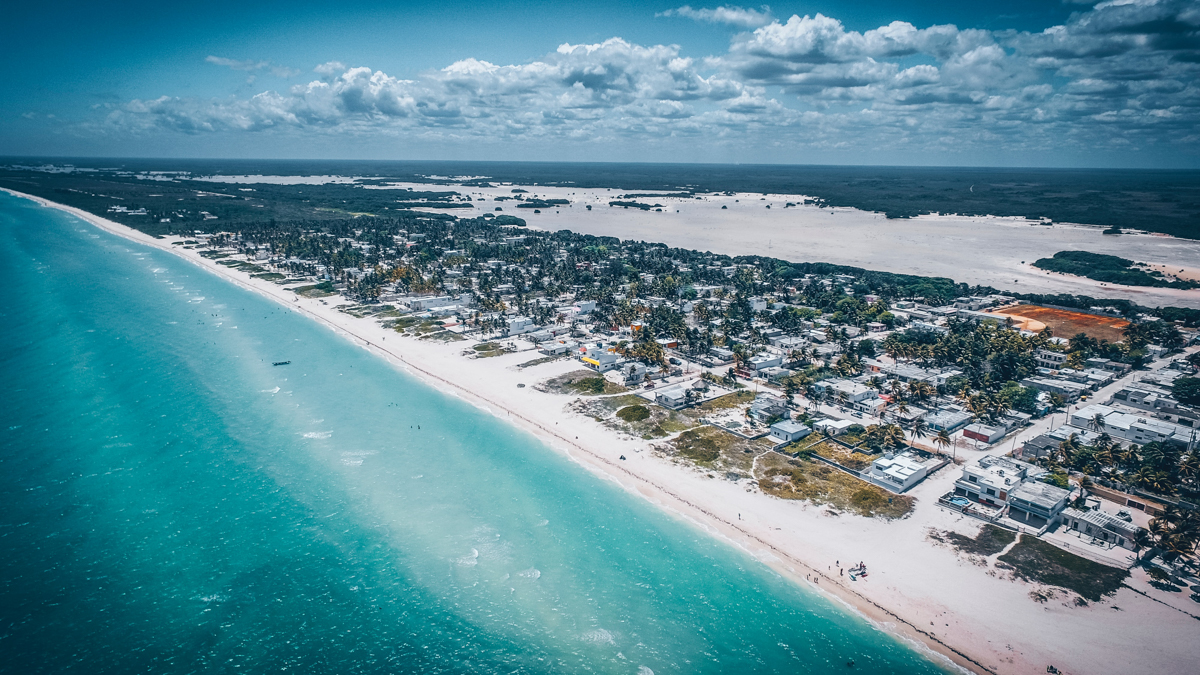 Beaches near Merida don’t get enough credit because many don’t have the turquoise waters of the Caribbean Sea, but they have their own magic.

Technically two beaches, Chelem and Chuburna are really just an extension of each other. Located just a 20 to 30-minute drive from Progreso, these quiet and tranquil beaches have attracted quite the North American retiree and expat crowd, so much so that there’s even an area of Chuburna now dubbed “Gringo Gulch.”

Nevertheless, the allure of these westernmost Merida beaches is their sleepy beach-town vibes and relatively empty sands.

Don’t expect to find any beach clubs renting out palapas or loungers here, but that does come with its benefits. Because the beaches are so empty, turtles have been known to lay their eggs here at night, especially in the scenic Playon las Dunas area of Chuburna.

In town, in both Chelem and Chuburna, you’ll find small markets selling fruits and veggies, some good restaurants, and basic amenities that keep its growing expat crowd, and day-trippers from Progreso, fed.

This means you can quite easily stock up in town with some food and beverages before soaking up some sunshine on the beach. 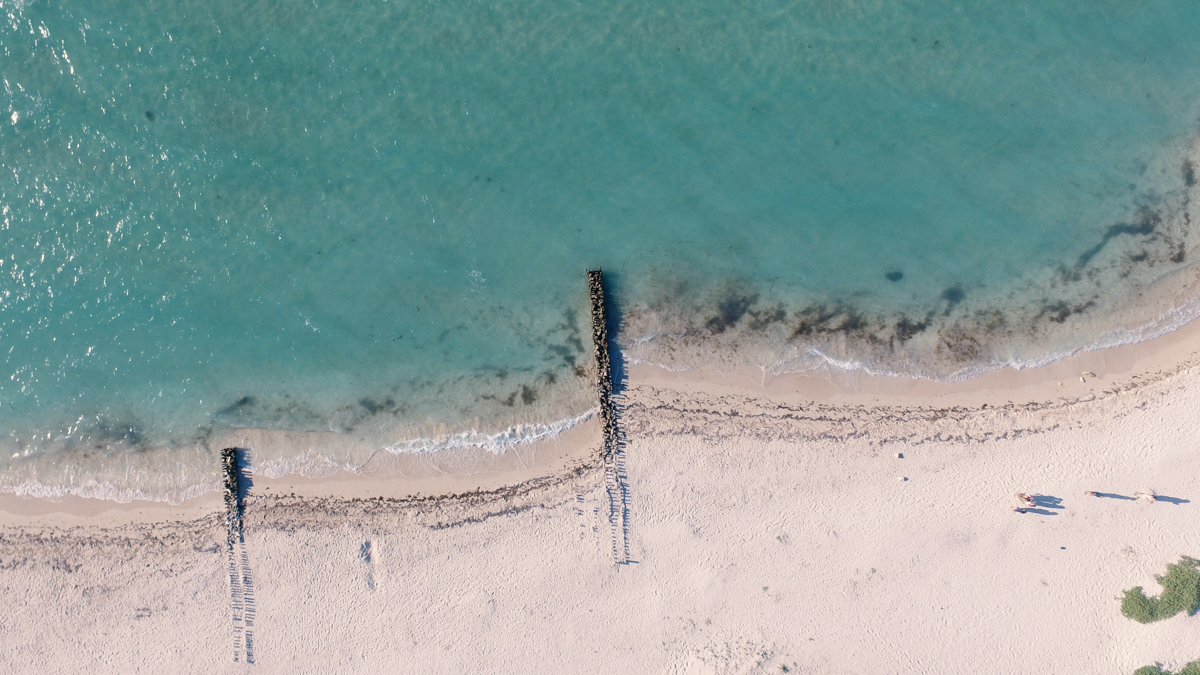 Playa Cochino is more popularly known as the pig beach of Merida.

In late 2021, local authorities rescued eight little orphaned Vietnamese piglets from an abandoned lot and are taking care of them beachside. They release them every day at noon from their corral and beachgoers are welcome to play, hold, and swim with the pigs.

Playa Cochino is a relatively small Merida beach but is one of the best maintained and a great spot to relax or cool off in the typically calm seas.

It’s located midway between the beaches of Progreso and Chelem in a small town called Yucalpeten. The little piglets begin accepting visitors around 8am daily.

Eventually, Playa Cochino will be just another Merida beach once again, as the plan is to move the pigs to another location when they reach adulthood. But for now, enjoy this adorable twist of beach-town fate that already draws about 300 people a day. 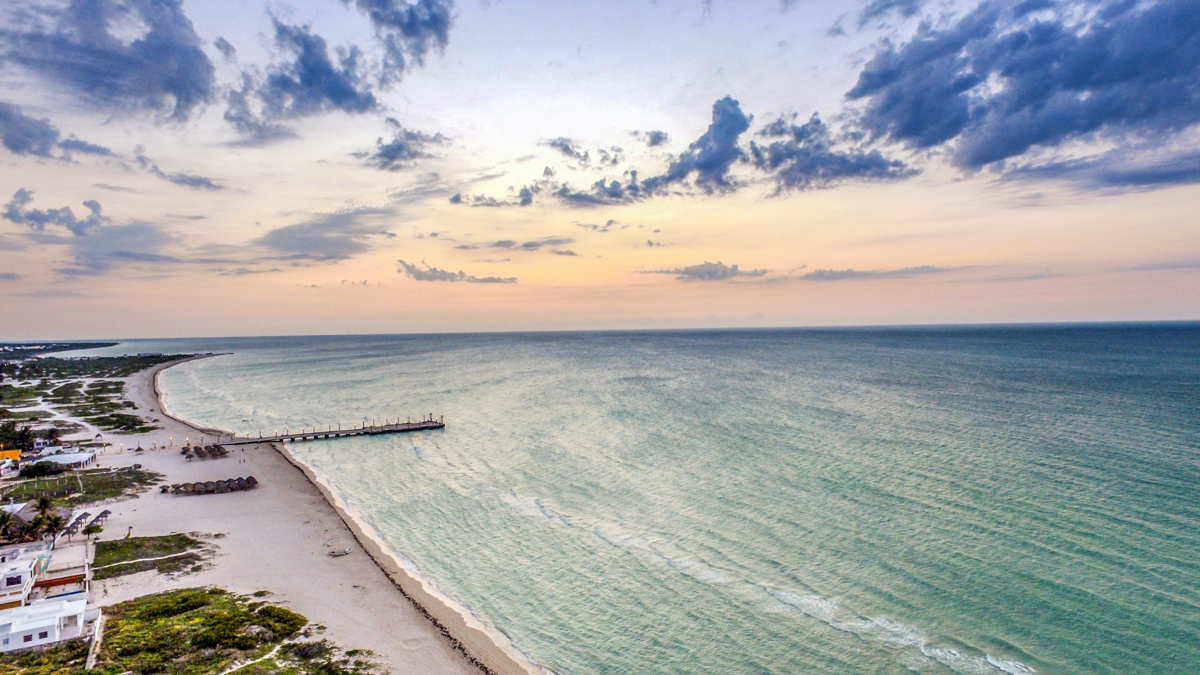 Little more than a ten-minute drive east along the coast from Progreso is Chicxulub, famously known as the crash site of the meteor that wiped out the dinosaurs and created the Yucatan Peninsula’s thousands of cenotes.

Today, its spacious and fluffy white sand beaches are lined with high-end residences, most of which are second homes for Merida’s wealthiest families and first homes to an increasing tide of Canadian and American expats.

The surge of weekenders and expats means Chicxulub is relatively well-developed compared to other Merida beaches, having a few small grocery stores, some modern amenities, and several good restaurants in town.

Before the out-of-towners moved in, Chicxulub was and is mainly a town of anglers, meaning the seafood in particular is some of the best you’ll find at any of the beaches near Merida. 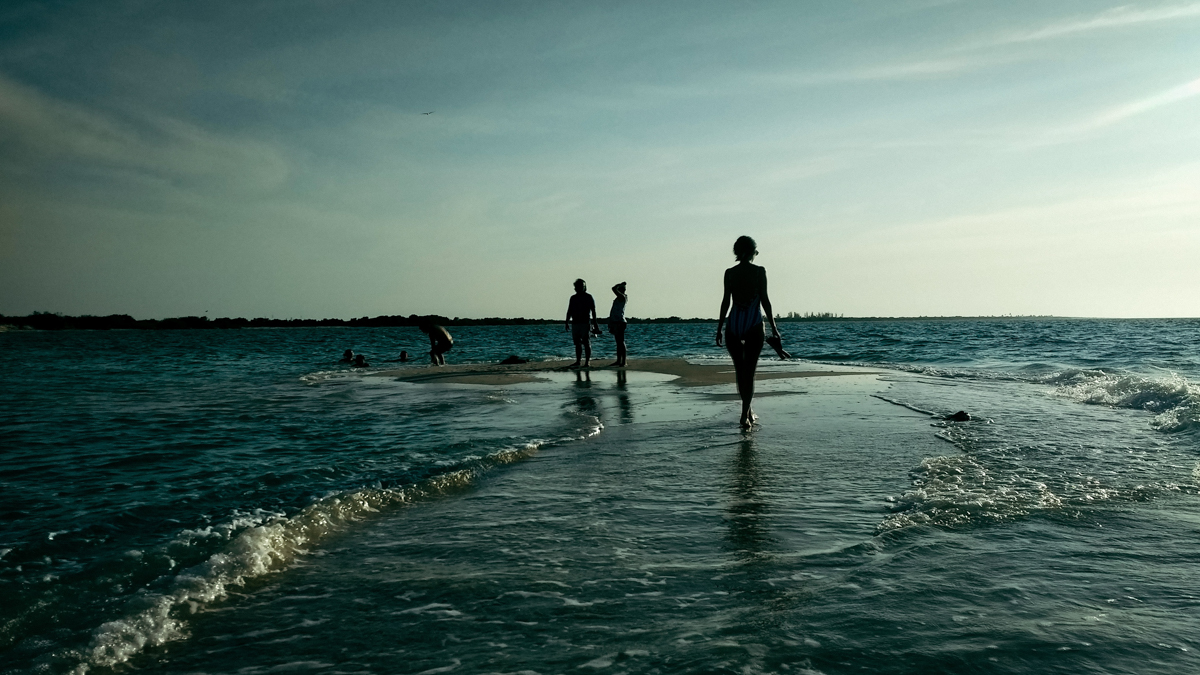 Sisal beach in the evening.

This quiet fishing village one hour from Merida is praised for its turquoise blue waters and some of the best beaches in the Yucatan.

In December 2020, Sisal’s allure was magnified by being added to Mexico’s list of Pueblos Magicos, a designation that has brought far more tourism than this sleepy beach-town is used to.

On Sisal’s beautiful beaches, you will find chairs and sunbeds for rent as well as family-run restaurants under shade-giving palapas.

Buy some food or a drink and camp out under their shade for the day. In the nearby area, there are mangroves to explore, cenotes to dip into, flamingos to spot, and even an old fort to check out. 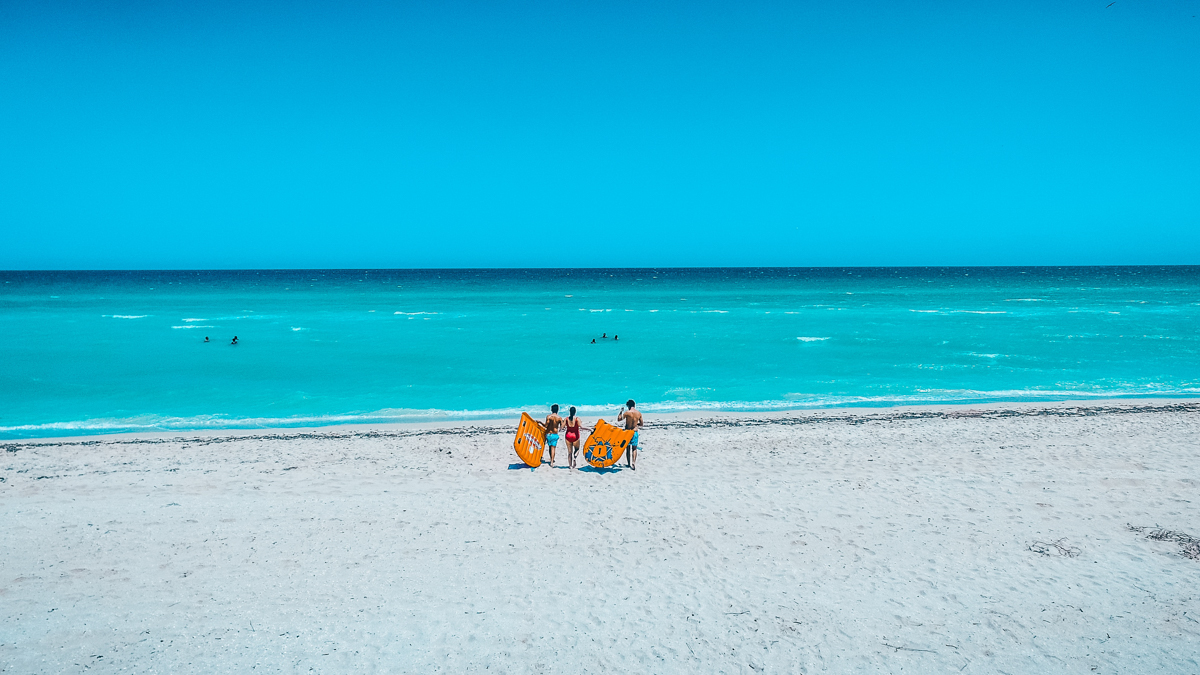 Sisal Beach is one of the best beaches near Merida.

Uncrowded and remote, San Crisanto is a beloved beach near Merida.

Locals like to refer to it as the coconut grove for its plethora of palms bending with coconuts. But you’ll find more than fresh coconuts at this Merida beach. Flamingos, pink salt lakes, and even crocodiles lace the nearby landscape, as do several freshwater cenotes and mangrove to explore by boat.

The beach itself is quite unique. Every evening, the sea recedes as much as 300 feet, making for the perfect sunset, then later stargazing, perch. During the daytime, it’s just a narrow strip of sand before crystal clear seas, void of hardly any infrastructure or development.

Most who visit this Merida beach set up for the day at Playa Sac-Ha for around 90 pesos, as there really aren’t any other spots along the beach where you’ll find a restroom or showers to rinse off in.

San Crisanto is as undeveloped as it gets, with very few restaurants or local markets even close to the beach, so plan to stock a cooler in Progreso or Merida before you arrive.

We spent 2 weeks in Progreso. The area is beautiful and the beach is white and the water is wonderful. We ate at breakfast many times at Vino Del Mar. Great service and great food at a reasonable price. We ate dinner and breakfest at Almadia(sp?). Breakfast was a little more expensive but great. my husband had the fettuccine alfredo twice. I had the Caesar Salad. It was fresh and delish. Don't miss out. The beach has a handicap area and the assist you in entering and exiting the water. For the children, they are working on a museum geared to dinosaurs. They have both DiDi and Uber there. Best trans at a reasonable price. We were there in April. They were working on the Malecon. You can rent scooters there. There are tours. You should look up Progreso for your next Mexican Vacation.

There are many hotels on or near the beach. Reasonably priced.