I have been avoiding these posts like it’s my job (when actually writing them is my job). I feel like I don’t know how to properly articulate it all. It feels so long ago already, this whole trip, but especially our time in Japan.

I guess I didn’t really class our week in Jeju as part of it. It was still Korea, it was still so familiar. It wasn’t until we crossed the Sea of Japan (or the East Sea depending on your allegiances) and landed in Osaka that I realized we had five months of adventure in front of us.

It all felt like a dream: floating from the airport to the train, grabbing our JR passes, the subway to Tenjinbashi, our empty Airbnb flat, so perfectly Japanese. We were on cloud 9, everything was “so amazing” and “so cute”.

Really we were tired. We had almost missed our flight from Korea. We walked for what felt like hours from the train station to the subway. We got lost finding the place. I kept trying to open the wrong front door cursing about why the freaking key wouldn’t work. The hallway of the apartment was so narrow that we couldn’t walk through it straight with our backpacks on and then the wifi password was in Japanese.

We spent another hour trying to find somewhere to eat. We didn’t know a single word in Japanese and we definitely couldn’t read the menu. Suddenly the realization that choosing an AirBnB out in the suburbs so that we could experience “real” Osaka felt like a completely horrible idea.

Eventually we chose a place that kind of looked like a diner. Their menu had one picture on it – a bowl of pork ramen. We pointed to it. I held up my fingers and said “two” in English like a total butthead.

Then we tried to figure out how to order two beers.

“Asahi?” I said in about six different accents.

Eventually I just said the word beer while miming drinking a glass with a handle on it.

He nodded immediately and brought us over two ice cold draft beers. 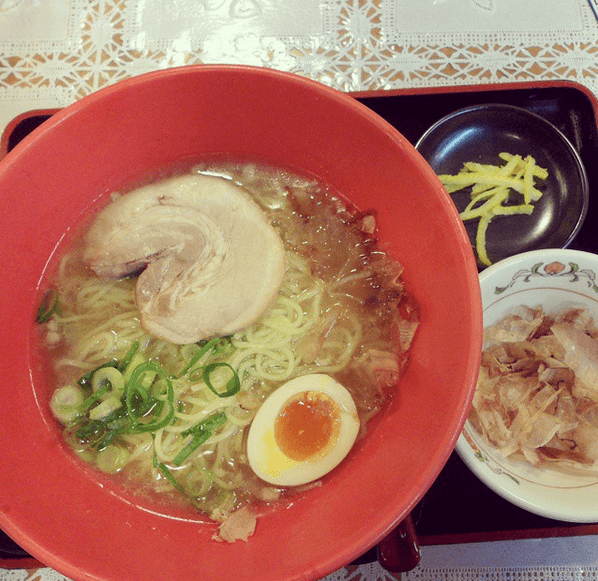 The soup was the best things I’ve ever eaten. At least that’s what it felt like after hours of travel and a few too many bags of salty snacks on the plane. It was hot and a little bit sweet. The meat was tender, there were eggs, fresh noodles, dried fish pieces that I thought were dried garlic. There were even slices of lemon rind on the side.

We looked at each other at the end of the meal, bowls nearly licked clean, eyes swollen with exhaustion, and we lifted our glasses in a toast.