For some reason I have now long forgotten, I kept very serious track of what we spent our money on while we were traveling last year. I had a little notebook and each night I would jot down what we’d spent, how we’d spent it, and then tally it up for the day.

It served to show us how much things cost in each country, it also helped us visually take note of how much we were spending.

Sometimes we thought we’d really gone wild only to look back at the book and see that actually we hadn’t spent much at all.

Other times it tallied up far quicker than it was meant to and we were able to take note and reign it back in.

It also means I can write incredibly detailed posts about how much it costs for two people to travel Vietnam!

Important Note: Since I visited Vietnam, the US Dollar has become a bit stronger against the Dong.

When I was there it was roughly 17,000 Dong for a dollar. It’s now up over 22,000 dong to the dollar. The prices below are given in the Dong that I paid as well as their current exchange rate in dollars.

Most cities in Vietnam are very happy to receive payment in dollars, just be sure they give you a good exchange rate! 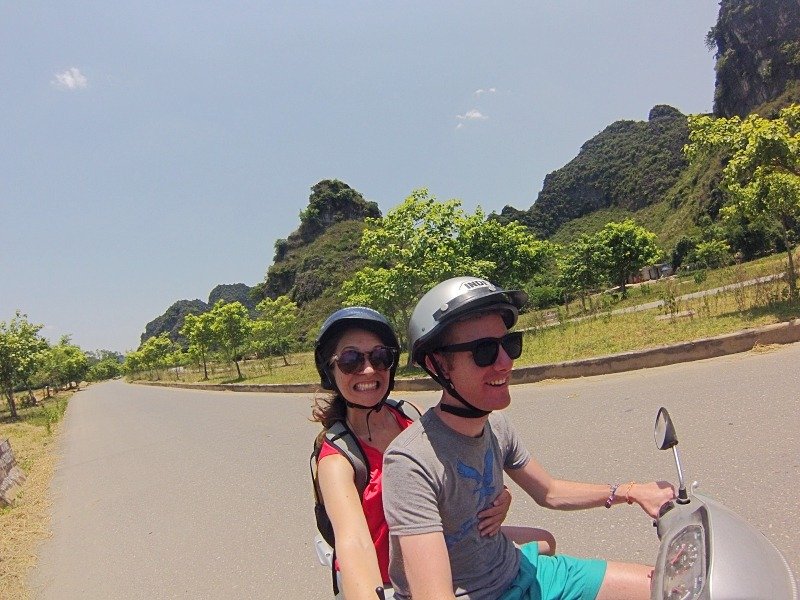 How Much Does it Cost to Travel Vietnam?

That is for both Luke and me. The only thing that this does not include is the price of the visa and any charges we incurred taking money out of ATMs (our bank didn’t charge us, but banks in Vietnam did).

How Much Does Food Cost in Vietnam?

Food in Vietnam was very cheap compared to other countries in the region.

This is how much we spent on food for one month for two people. 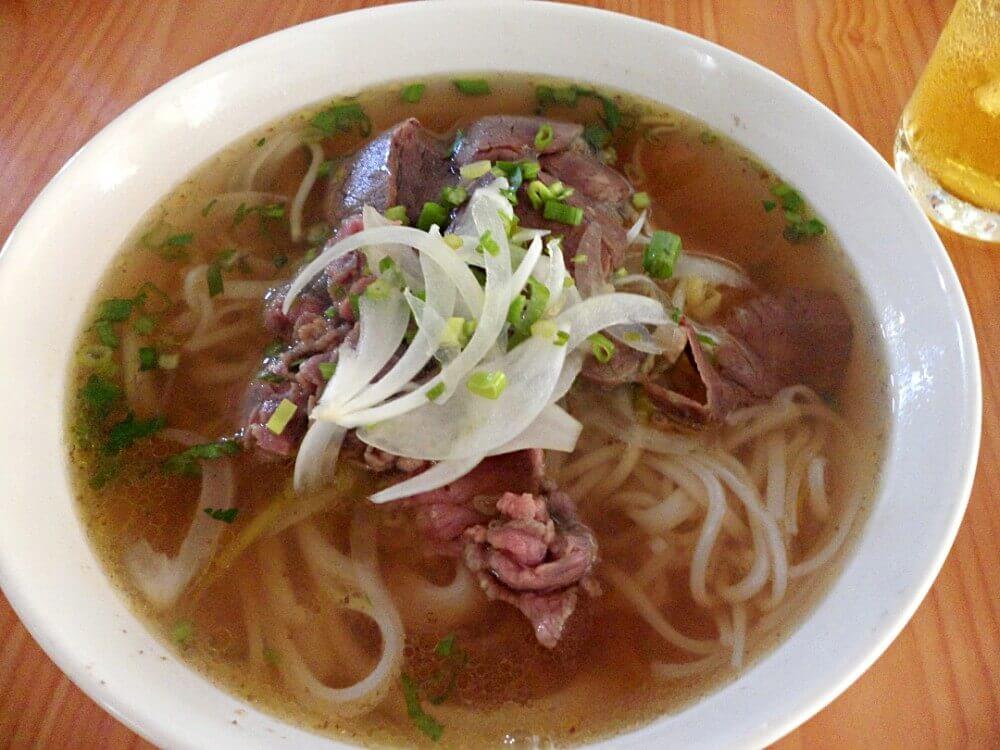 How Much Does Accommodation Cost in Vietnam?

Accommodation was not the cheapest we encountered in Asia, but still very cheap, especially split between two people. We always looked for the backpacker areas and walked around negotiating to try and get a double room with our own bathroom, wifi, and breakfast. In total over 30 days we spent 4,894,000 Dong on Accommodation ($220). This excludes two nights that we spent on a night bus and two nights which were spent on our Halong Bay Tour. We were usually quoted $8-$12 for a room and did our best to haggle on the price. Just note that most places will quote you in dollars, then give you their own exchange rate when converting it to Dong. If you’re going to pay in Dong, always ask for that price up front and don’t be afraid to barter!

How Much Does Beer Cost in Vietnam?

A valuable question. It’s the cheapest (and perhaps most horrible) beer we encountered in Asia. Hanoi is famous for its Bia Hoi, or “fresh beer”. It’s basically been brewed really quickly and has to be drank within 24-48 hours. It’s about 15¢ for a glass. Head to Ma May Street for the best backpacker vibes. We spent a lot on alcohol. It was perhaps our largest expenditure. We enjoyed a beer each night after a long day of sightseeing, but thankfully it didn’t really break the bank (just my belt due to an ever-growing waistline). In total we spent 1,915,000 Dong on beers, cocktails and other non-necessary drinks (this also includes juices, but not coffee). That’s about $86. 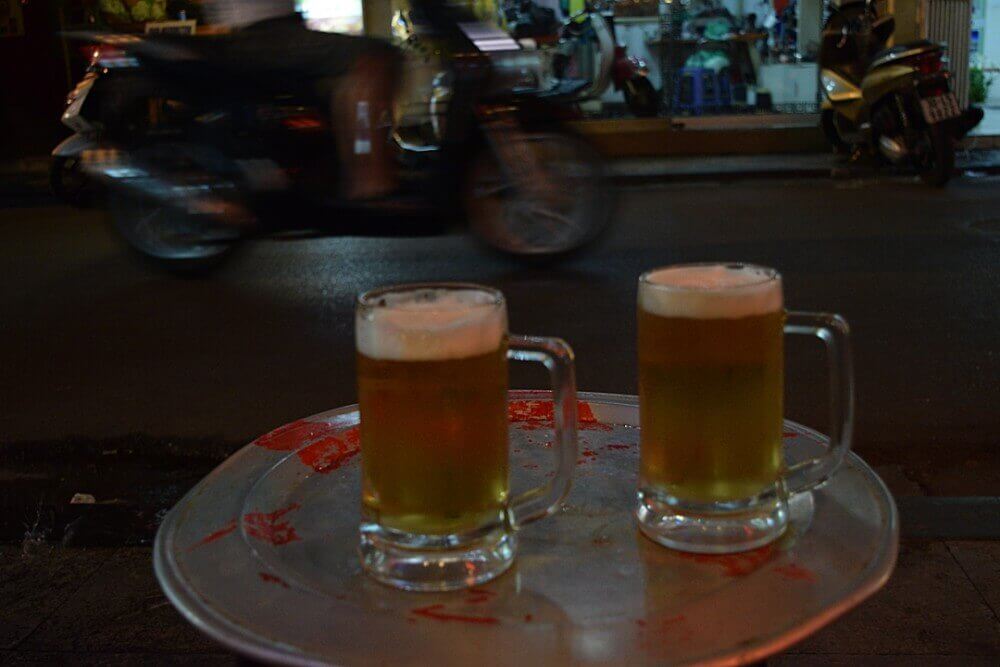 How Much is Water in Vietnam?

Water is very cheap in Vietnam. As it’s unsafe to drink the tap water, we were buying large 1.5L bottles every day. Often there are little old ladies looking to take the empties so that they are recycled – keep your eyes out for them!  Water bottles ranged from 6,000Dong (rare) to up to 12,000 Dong. The average price was about 9,000 Dong (less than 50¢). In total we spent 511,000 Dong on water ($22) over the entire month.

*If you’re concerned about your impact on the environment, as we became acutely aware of how much waste we were creating, I highly recommend these filter water bottles

. I bought one for myself and one for Luke when we moved to Mexico last year and they have been amazing. They last for ages and filter any tap water into perfectly safe drinking water. I talk in detail about them on my recommendations page.

How Much is Transportation in Vietnam?

We opted for a super cheap mode of transportation, the ‘open bus’ ticket with Queen Cafe. The bus is by far one of the most convenient and cost effective ways to get around the country. For $34 each for a bus ticket that took us all the way from Hanoi to Ho Chi Minh. We were able to choose which destinations we stopped in, spend as much time in them as we wanted, and simply call them up the day before to book onto the next bus. They go everyday from every destination and all of them are fitted out with beds for sleeping. It’s not the most glamorous and certainly not the most comfortable, especially for anyone over 5’10”, but it is by far the cheapest way to get around.

If I were to return to Vietnam and explore more of the country, I would probably use the train. That being said, we met a lot of fellow travelers on these buses and I don’t think that would have happened if we’d taken the train.

In total we spent 2,495,826 Dong, about $110. In addition to the hop-on, hop-off ticket, we also did a round-trip journey on a bus to Sapa, took an electric tram to a temple in Tam Coc, and took a bus across the border into Cambodia. 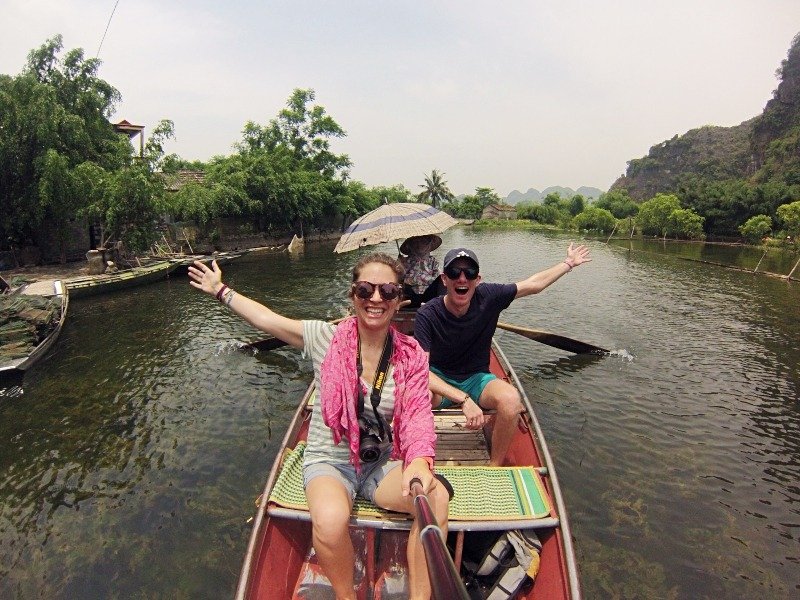 Our biggest splurge was on our Halong Bay Tour. That cost us about $135 each and included three days and two nights. We booked that through a tour agency and as we also booked our bus tickets there, they gave us a bit of an overall discount on everything.

Museums are relatively inexpensive, but none are free. We usually paid between 80,000 and 120,000  dong for us both to enter somewhere. Some of the tombs or the Citadel in Hue were a bit more.

We also spent three days hiking in Sapa and staying with a Hmong host family. For those three days for both of us, everything included (transport to and from Sapa, all our meals, and two nights stay), we paid $100.

What Would I Do Differently?

Obviously, you can do it a lot cheaper than we did. You can opt out of the booze and save yourself almost $100 over the course of the 30 days. You might splurge more on accommodation. For $25 a night you could get yourself a luxury room in a nice hotel with a swimming pool and a buffet breakfast. We ate a lot of street food which kept our food costs down. You could easily spend more by eating at restaurants for lunch and dinner or opting for more Western cuisines. Or you could spend even less and simply eat Pho and Banh Mi all the way down the country.

Personally, there’s not much I would change. I’m astonished at how little we spent over the 30 days. Looking back I might have spent a bit more on the bus ticket so that we could have been with a better company (I recommend Hanh Cafe to anyone, DO NOT take Queen Cafe if you are going south of Tam Coc). I might have bought a few more souvenirs and not worried so much about how much we were spending. This was the first stop on our tour through Asia, so we were being very cautious, it seems like we were a little bit too cautious.

**If you enjoyed this post, head over to read my 30-Day Vietnam Itinerary or check out the other budget posts for Thailand, Cambodia and Laos.

Want to Read this again later? Pin it! 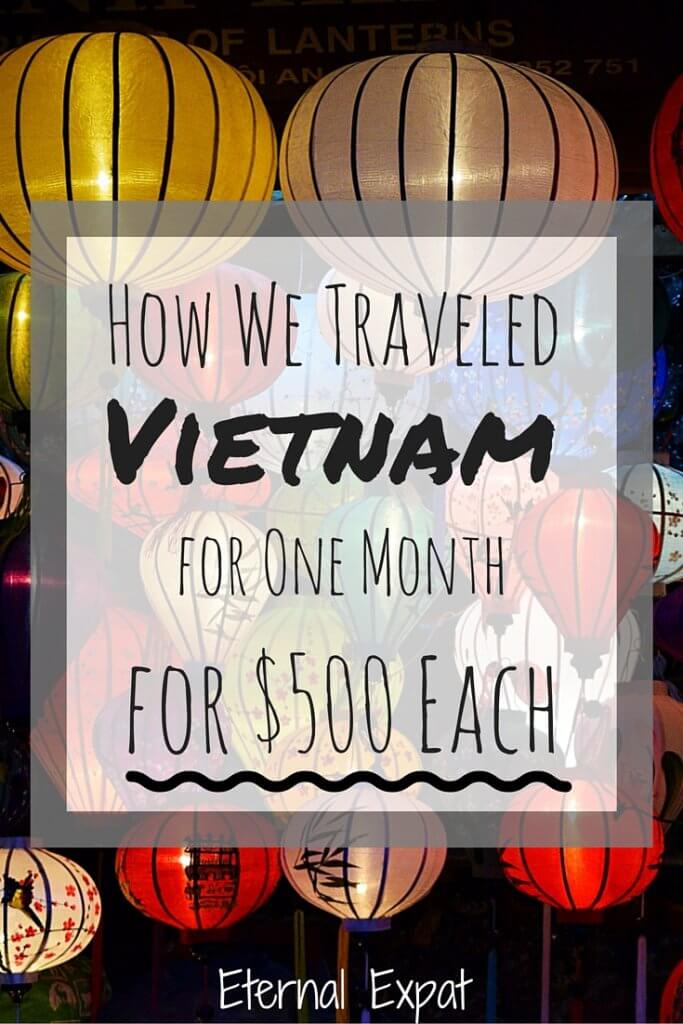 $25 per night for a luxury hotel, that means I could literally live in a luxury hotel in Vietnam for cheaper than the rent I currently pay here in the US... crazy!

I’m currently sitting in my hostel in Koh Tao, Thailand, trying to figure out if I should go to Vietnam or Cambodia for my next two weeks. I was struggling to decide and then I came across your blog on Pinterest, and it honestly helped so much! Your posts are so informative and detailed. Love it, keep up the great work!!

Thanks so much, Rhea! Glad you found it helpful! Both Cambodia and Vietnam are awesome - you can't go wrong. But if you love delicious food, then it doesn't get much better than Vietnam!

Hi I was in Vietnam a month ago by tour it was only 10 nights but I like to travels without tour now I have some idea from your trip Maybe in future I'll go one more time. I may ask the name of the hotels you stayed.

Would it be better to book excursions once we are in country?

Yes, definitely! If you are starting in Hanoi there are tons of great tour companies and if you book a few things with them, they'll give you discounts. I recommend Friendly Travel (it's also a hostel) in the old quarter in Hanoi.

Travel Vietnam always inexpensive and extremely reasonable. Also people may also be in the resort, because the price is cheap so do not worry.

If given the opportunity to turn the city of Nha Trang, take a look and make a reservation here Vinpearl resort Nha trang to be discounted more.