A Mexico 2 week itinerary can take you through so many different places. This is all about the cities and colonial towns that you don’t want to miss in central Mexico

If you’re more interested in a Mexico 2 week itinerary at the beach, check out this article.

Mexico City is awesome and while I could recommend two weeks worth of things to do in the capital alone, I think if you have two weeks in Mexico, you should definitely get out of the city limits and check out all of the other beautiful places that central Mexico has to offer.

This Mexico two week itinerary will give you a little taste of some of the places you can explore once you land in Mexico City.

I recommend at least getting up to the state of Guanajuato and south to Puebla if you can. They are easily accessible by bus or by renting a car.

The best and cheapest airport to fly into for this region is the Mexico City airport. It’s one of the biggest airports and hubs for the country and you can easily fly here from any major city in the US.

I’ve seen round trip, direct flights from New York for as little as $320.

I usually check Skyscanner first to see what the cheapest days to fly are (generally Tuesdays and Wednesdays FYI), then I’ll go to those companies’ websites and see if they’re selling them for cheaper.

Should You Rent a Car?

It’s totally a personal preference whether you want to rent a car for central Mexico or not.

If you are going to spend a most of your time in Mexico City, you definitely won’t need a rental car.

But if you’d rather only spend a few days in the city and head off exploring and you want the freedom to travel whenever you want, then a car might be a good idea.

Sometimes the idea of driving in Mexico puts people off. When you get into Mexico City it can feel like the roads are utter chaos. And in Mexico City, well, they kind of are.

That being said, if you want to get out of the city limits to explore, driving in the rest of Mexico, is actually pretty easy.

The roads are wide and highways have several lanes just like in the US.

Read my post about renting a car in Mexico to get a better idea of how easy it is and which companies I recommend.

You can rent a manual for slightly cheaper than an automatic, but there are plenty of automatic cars available.

See if you can get a highway tag from the car rental company you’re using so that you can access toll roads (you can pay in cash at the toll booths too, but it’s easier and quicker to have a tag). 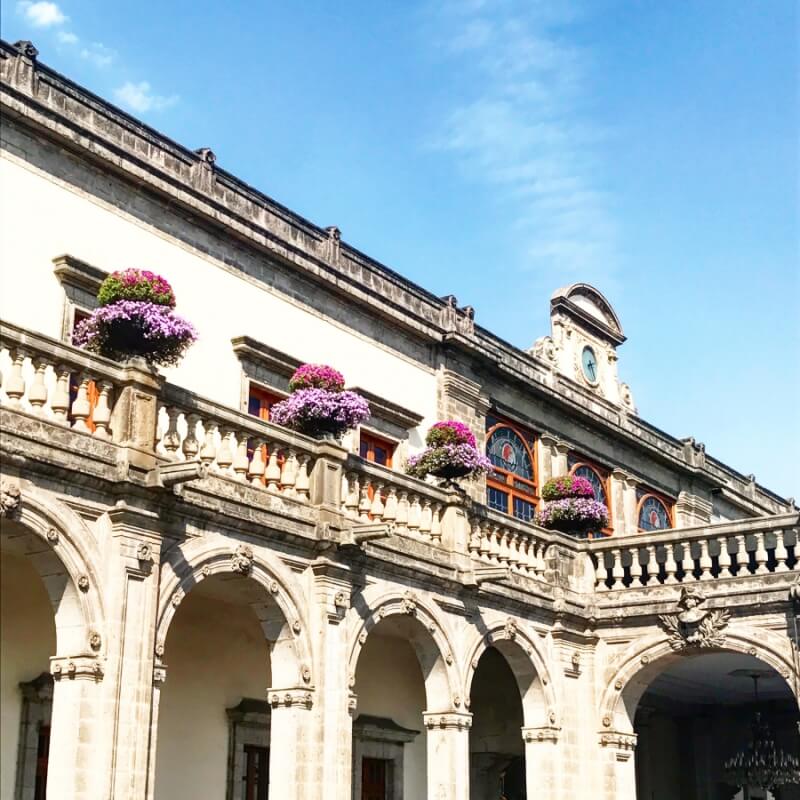 How long you spend in the capital is totally up to you. I have written several itinerary posts that might help you plan your time in the city:

There are tons of things to do, places to eat, and bars to enjoy in Mexico City. I have lived here for a year and I’m still discovering new things.

That being said, if you wanted to come and check out the main sites like Teotihuacan, the Zocalo and surrounding historical buildings, and some of the museums like the history museum, anthropology museum, and Frida Kahlo Museum, you could get by with exploring it all in four or five days. 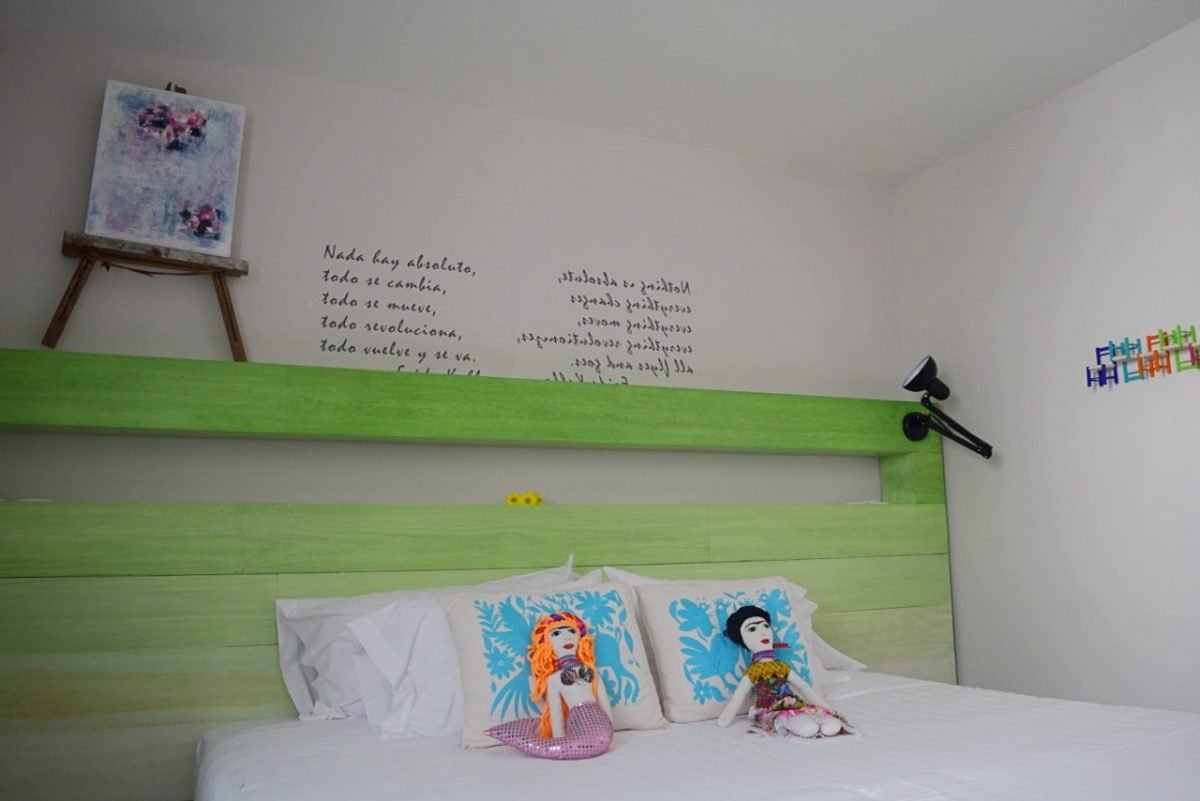 Where to Stay in Mexico City

If you want to know the best places to stay in Mexico City, definitely check out Airbnb.

It’s what I always recommend to friends and family when they visit. In my opinion, Airbnb has the best value for money in the city and it gives you the chance to live more like a local.

These are the best Airbnb places in Mexico City that I’ve found.

If you’d rather stay in a hotel and have everything taken care of,  support the local tourism industry by staying in some of the boutique hotels in the city: 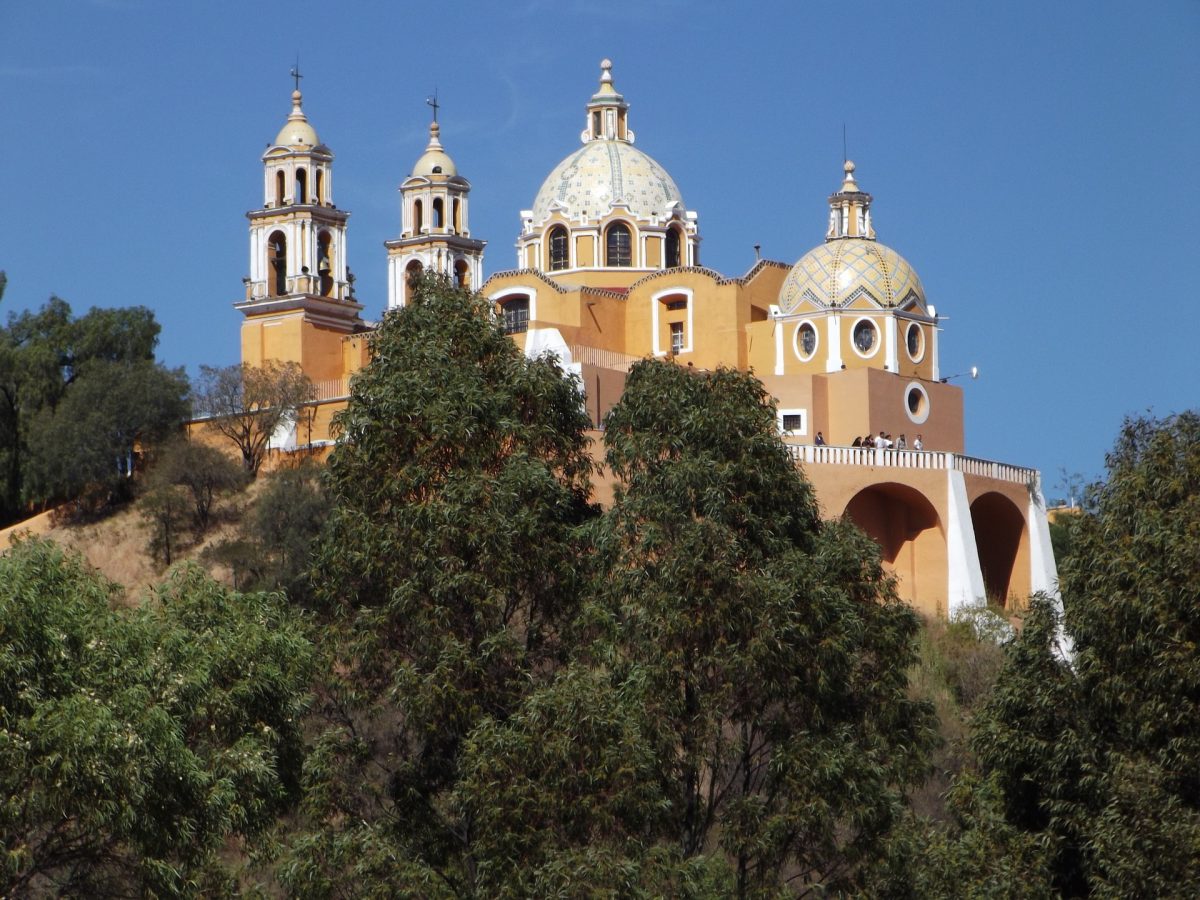 Puebla is an easy 2-hour drive from Mexico City and is definitely worth a few days of your time.

What to See in Puebla

One of the biggest draws to Puebla is the pyramid of Cholula. What remains of the pyramid doesn’t seem like much, but it is actually the widest pyramid in the world. You can walk beneath it in this incredible network on tunnels.

There’s now a beautiful church atop (which experienced a little bit of damage from the September 2017 earthquake, so is currently closed) it and the whole town is pure “pueblo magic0” as it’s called in Mexico. Cholula is definitely a magical experience.

The city itself has tons of great things to do and see and has a lot of really fascinating history that I didn’t even know about before visiting. Also, all the food. It’s exceptional.

Read more: Things to Do in Puebla, Mexico

Where to Eat in Puebla

Another reason to go to Puebla is to eat ALL the food. Puebla is the birthplace of mole poblano, one of the most famous and my personal favorite mole. It’s rich in flavor, mildly spicy, and so complex.

You’ll find it at almost every restaurant in the city, but the best ones are Fonda de Santa Clara, El Mural de los Poblanos, and Meson Sacristía de la Compañía which is a hotel, restaurant, and antique shop (they also run cooking classes so you can learn how to make the famed mole poblano, too!).

Also be sure to check out the amazing pastor at Las Ranas. I ate here twice in the four days I was in Puebla. The best spot for breakfast is El Viejo Rosario. Their chilaquiles are freaking delicious and their coffee is strong. Just be prepared to wait, it’s a busy spot on the weekends.

I’ve written a full post about all the best food I ate in Puebla. 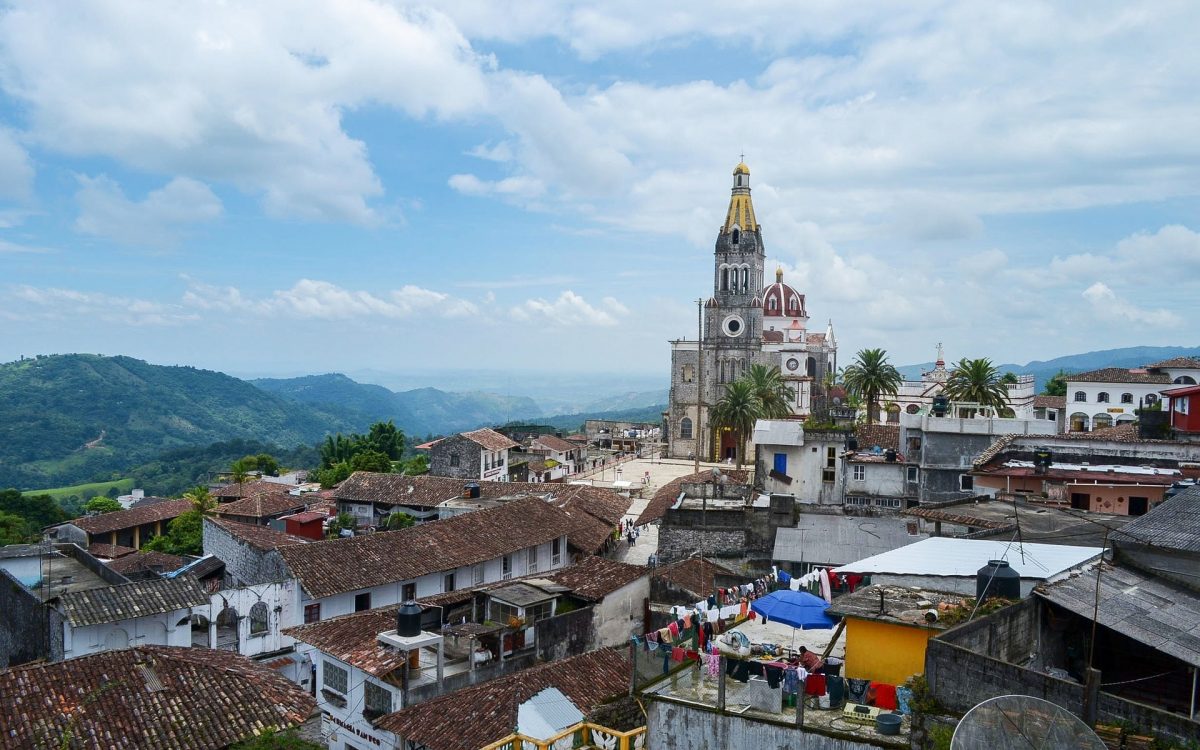 Where to Stay in Puebla

There are so many cool hotels and Airbnb places in Puebla. These are some of the best I’ve found for price, value, and location. 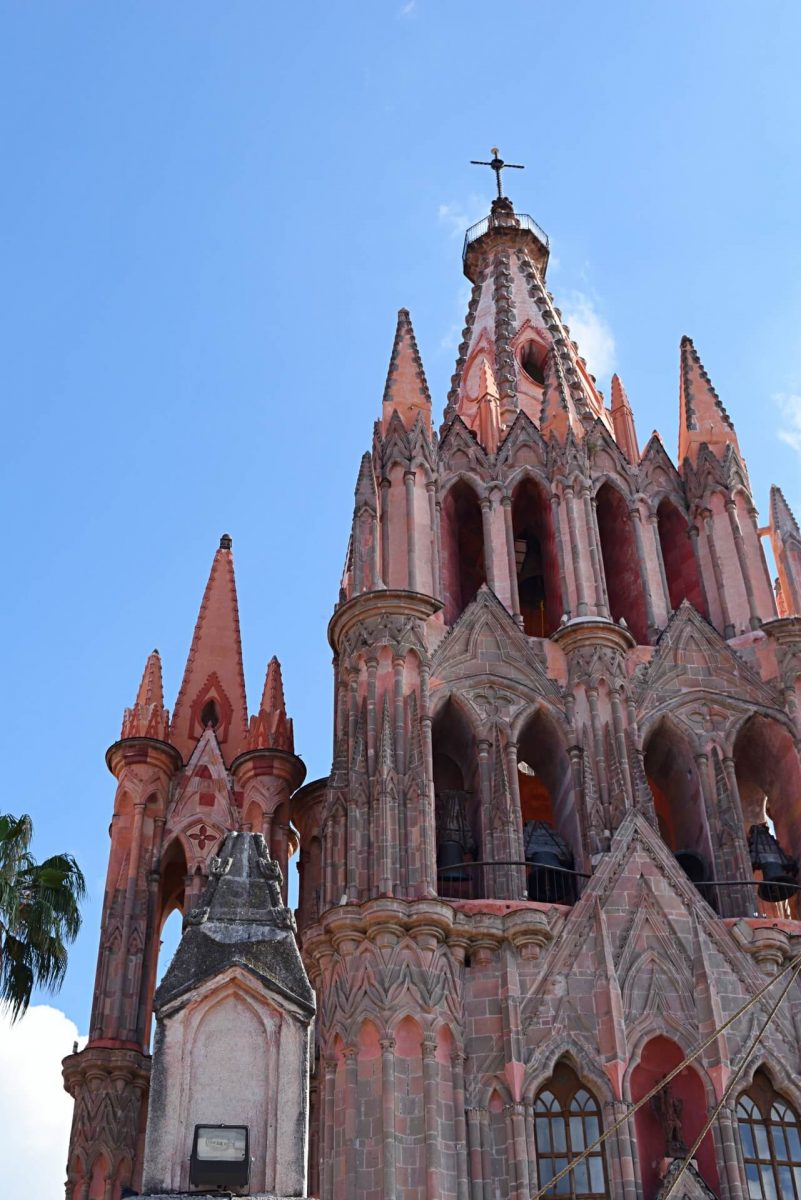 You can easily fill up a long weekend in San Miguel de Allende. It is one of the most picturesque places I’ve visited in Mexico. The old colonial town has kept a lot of its colorful charm and has tons of great restaurants and historical sites to explore.

I wrote a full guide to San Miguel de Allende which you can read here:

We spent three days there and I could have easily spent a few more.

The town is so walkable and the people are so friendly. I recommend checking out the Botanical Gardens and walking up to the different mirador or lookout points scattered around the city to get a view out over the mountains.

Where to Stay in San Miguel de Allende

I highly recommend the Airbnb house that we stayed in while we were there. The couple that owns the casita couldn’t be nicer and the rooftop terrace is an incredible place to have your morning coffee. It’s also really centrally located. You can book Casita Weibelong here.

If you’d rather stay in one of the many boutique hotels in San Miguel de Allende, these are the ones I recommend:

What to See and Do in Guanajuato

It’s roughly the same size in the city center, but Guanajuato just has a bit more going on.

You still get the beautiful colonial buildings and their vibrant colors, but with fewer tourists.

I also think it has some of the best food in this region of the country. You can read my list of the best restaurants in Guanajuato and check it out for yourself!

What to do in Guanajuato 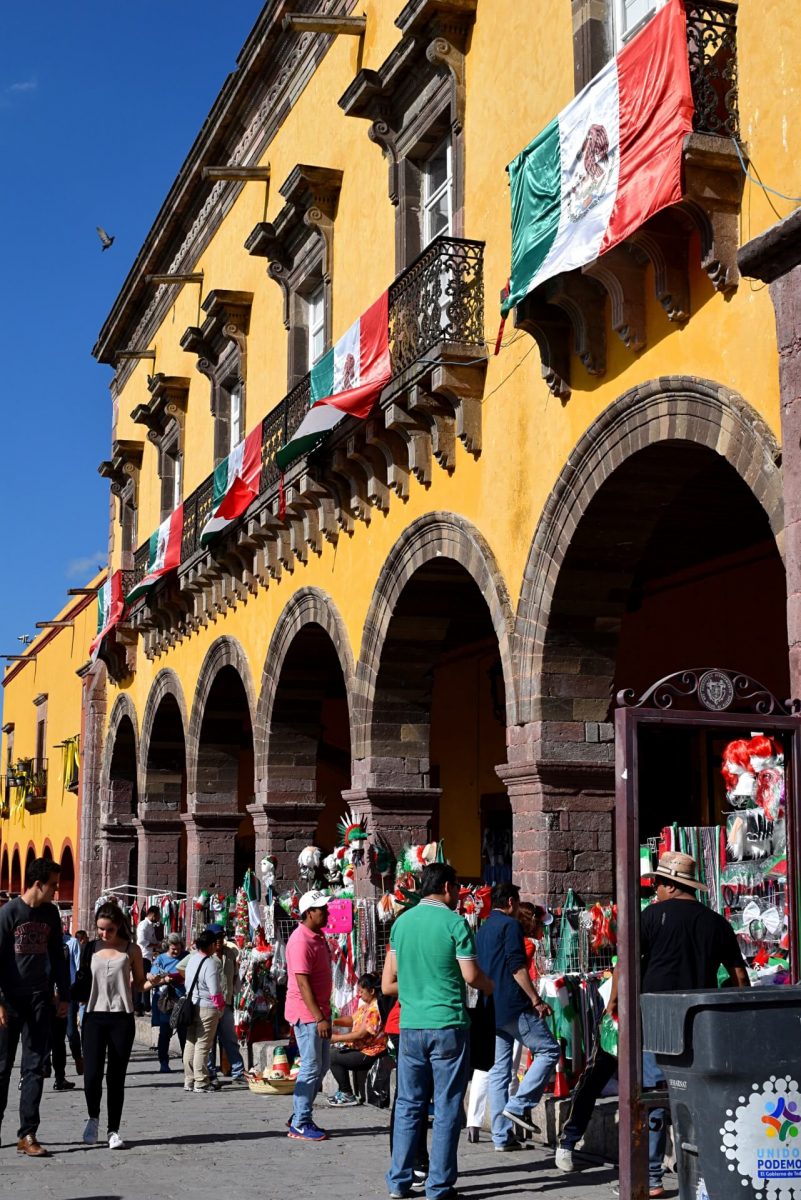 Other Itinerary Options for two weeks in Central Mexico

If you have more time or you have a car and want to get out and explore more of the region, these are places that I would put high on the list for exploring.

For some reason, El Tajin doesn’t get the fanfare that Chichen Itza or Teotihuacan get, but it is absolutely incredible. Admittedly, I’ve never been (a car is basically needed to get there), but it’s less than two hours from Mexico City and therefore an easy day trip.

El Tajin, also called the Pyramid of Papantla, is a huge UNESCO World Heritage Site and pre-hispanic city that has been very well-preserved. 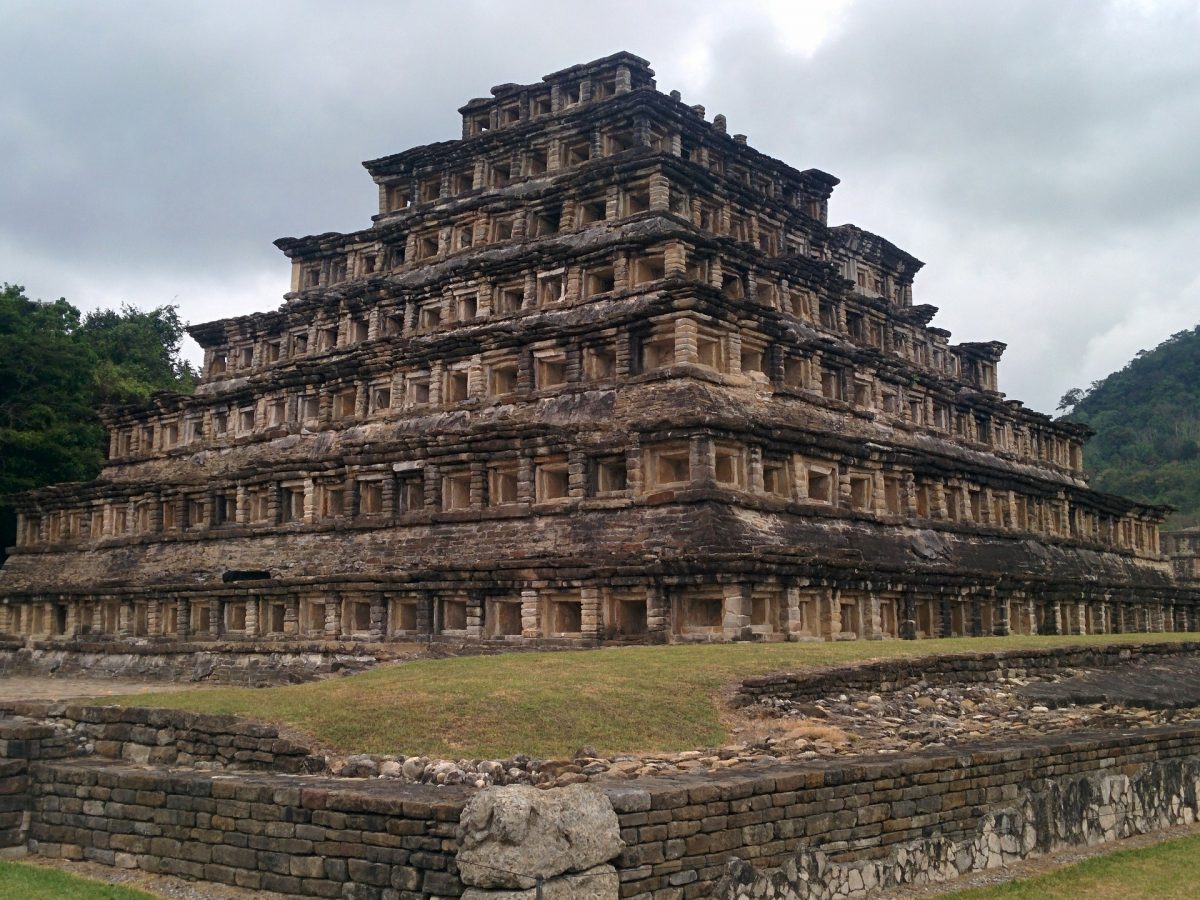 Queretaro is even closer to Mexico City than Guanajuato and San Miguel de Allende. It’s a short 3-hour bus journey north to this small city where you can enjoy amazing food and plenty of unique sites.

I’ve written a comprehensive guide to Queretaro with things to do, places to eat, and the best hotels and Airbnbs to stay in here:

These are just a few of the things you can pack into a two week Mexico itinerary.

Guanajuato is an amazing city that is a short distance from San Miguel de Allende. You could easily tac this onto your trip if you have a few more days to spare.

In my opinion, the street food in Guanajuato is some of the best in the country and shouldn’t be missed if you can help it!

It’s also home to a rich history with tons of museums like the Alhondiga de Granaditas, where the Mexican fight for independence from Spain began.

This country is enormous and it would be impossible to try to see it all in one go. Spend a week in Mexico City, explore the wine region of Baja California, or spend all your time enjoying the beaches of Tulum. Mexico has SO much to offer! 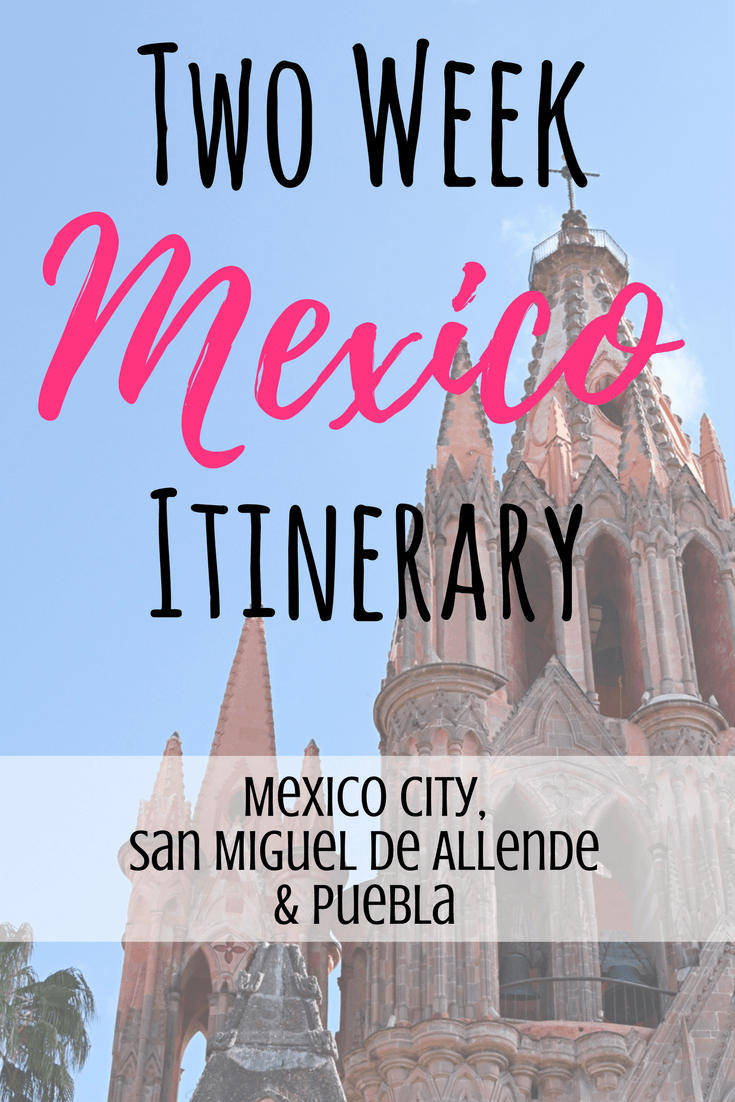 Hmm, you read my mind - this is the itinerary I'm planning. I was originally going to just spend a week in Mexico City - and then the pandemic hit. Now that my trip has been pushed 2 years out from the original date, I'm going to take 2 weeks and have fun - looking forward to this, and thank for the tips!