I was excited to try all of the different food in Puebla during our trip their last month, but I was totally unprepared for how amazing it was going to be.

Everything from the simply taco stands all the way to the sit-down mole restaurants were absolutely mouth-wateringly good.

I definitely didn’t hit up every restaurant in Puebla, but I tried a lot of great food and found some great bars for the evenings, too. These are the best restaurants in Puebla that I went to and all of the best food that I ate in Puebla.

There are so many things to do in Puebla, but eating in this foodie town should definitely be a priority.

If you’re spending two weeks in Mexico be sure to explore areas like Mexico City and Guanajuato, too!

The Best Food in Puebla 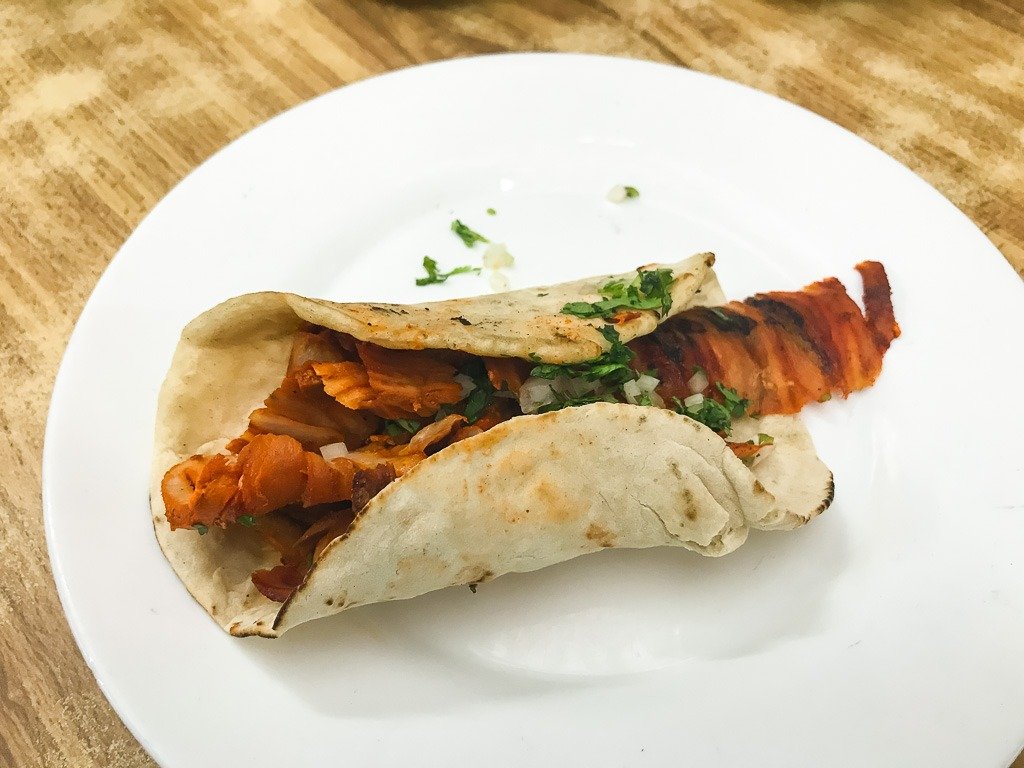 I joked with Luke that I would take the two-hour bus from Mexico City for the day just to eat their pastor tacos again.

Las Ranas was the first meal we had in Puebla and I loved it so much we went back to have it for our last meal there, too.

There are two locations on the same street, so if you want to sit down, be sure to go to Las Ranas Patio. Otherwise, you can grab a few tacos to go or wait for a bench at the other location further down the street.

There are two things that I highly recommend getting when you come to Las Ranas: the tacos árabe and a plate of pastor by the kilo.

The first time I went I ordered two tacos árabe, which is a regular pastor taco except instead of being in a corn tortilla, it’s in a fluffy pita-like bread. It was so delicious.

The second time we went, we looked around at what other people were having and we ordered half a kilo of the pastor.

It comes with a plate of onions and pineapple, a bowl of cilantro, and tons of tortillas. It’s a bargain at less than 100 pesos and half a kilo was the perfect amount for two hungry people. 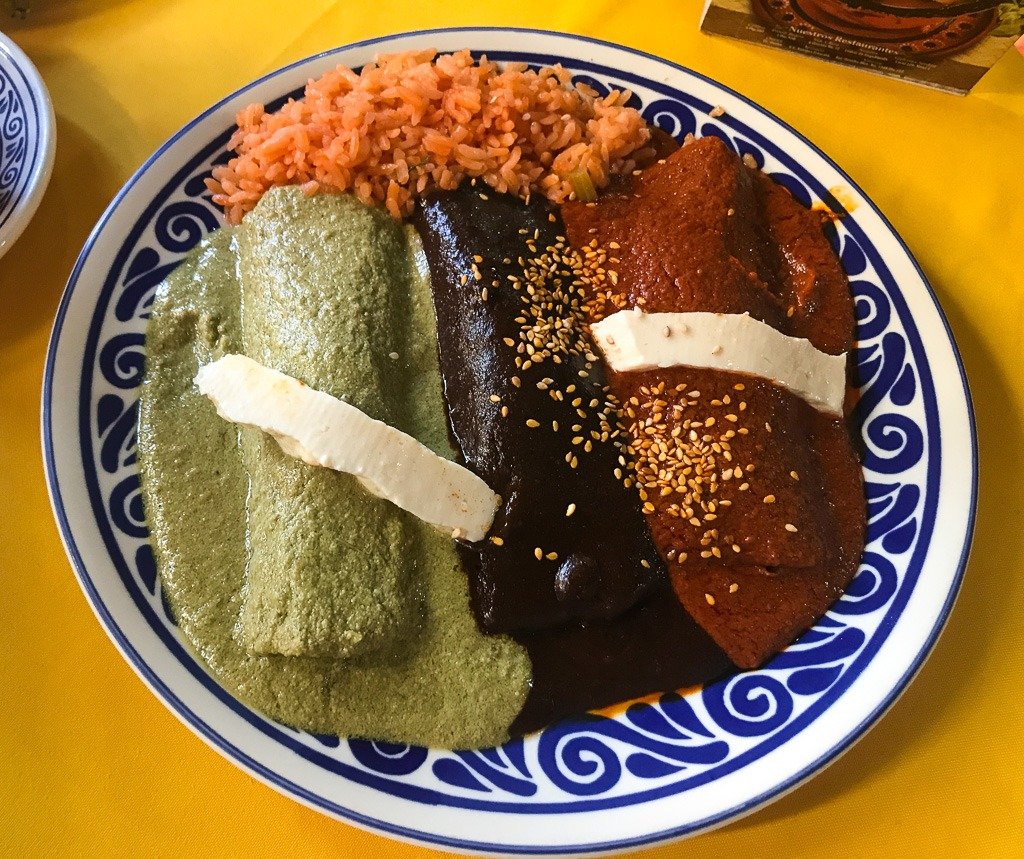 This was my favorite place where we sampled a lot of different Poblano foods. There are tons of different locations around the city, but I can personally vouch for the one located at Avenida 3 Poniente 307 only a few blocks away from the zocalo.

Both are corn-based antojitos. The chalupas are a flat tortilla that has been fried slightly.

It’s softer than a tostada but crunchier than a regular corn tortilla. It was topped with perfectly tender pork and different salsas. Tayoyos are a fatter corn dough that has been stuffed with different fillings.

The ones we had were stuffed with potato and topped with cheese and salsa. I really liked their texture and they were packed with flavor. 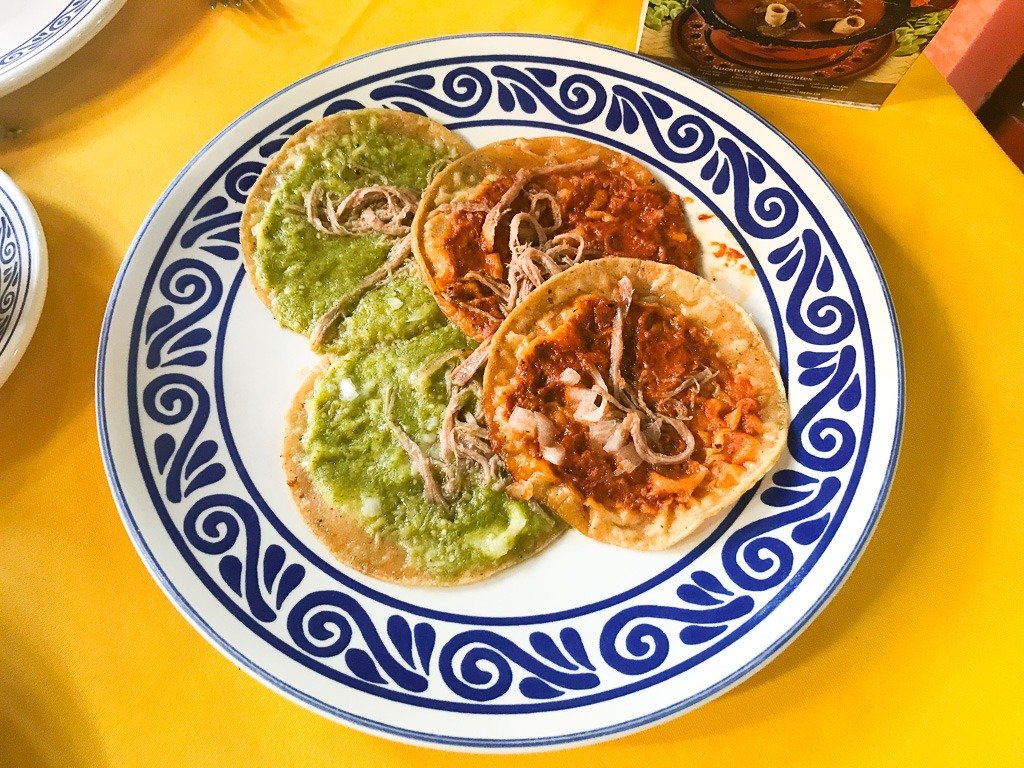 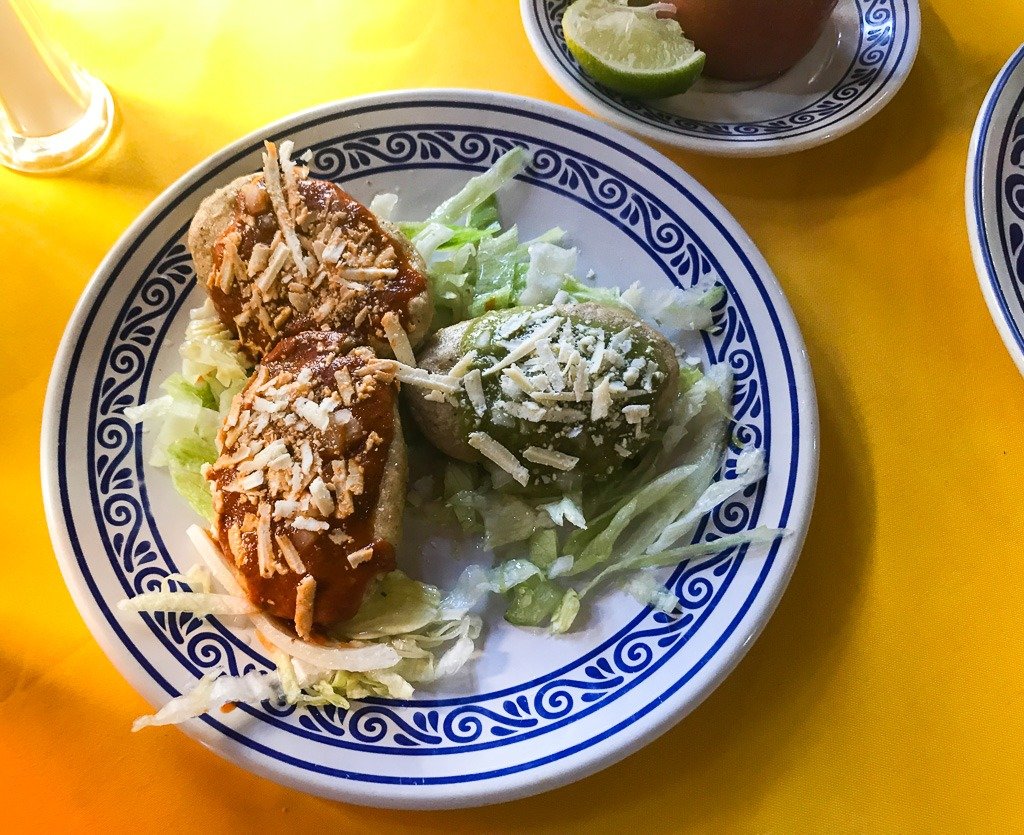 Tayoyos – these were my favorites!

For our main course, Luke and I shared the enchiladas with 3 moles.

We went for lunch, so two starters and one main was plenty for the two of us. The three different mole sauces were absolutely incredible.

One was the pepian verde, a green mole made with pumpkin seeds, one was the traditional mole Poblano, and the third was a rich red mole. We wiped the plate clean with the tortilla chips that come with the meal.

For such a nice restaurant, I found it to be very reasonably priced. For all of that food, two beers, and a tip, we spent 365 pesos, which is just under $20.

This is the restaurant we visited most during out four days in Puebla.

The food is outstanding and you can’t beat the price.

We came here twice for a big breakfast of chilaquiles and once for lunch to indulge in the chamorro with mole sauce (Chamorro is a slow-cooked pig’s foot). Every time, we walked out spending less than $10, including tip.

This is a really popular spot to eat, so be prepared to wait in line for a few minutes. Push through the crowds to give your name at the front podium, then simply wait for your name to be called. Even when it was REALLY busy, we never waited for more than 20 minutes. It’s worth the wait, I promise. 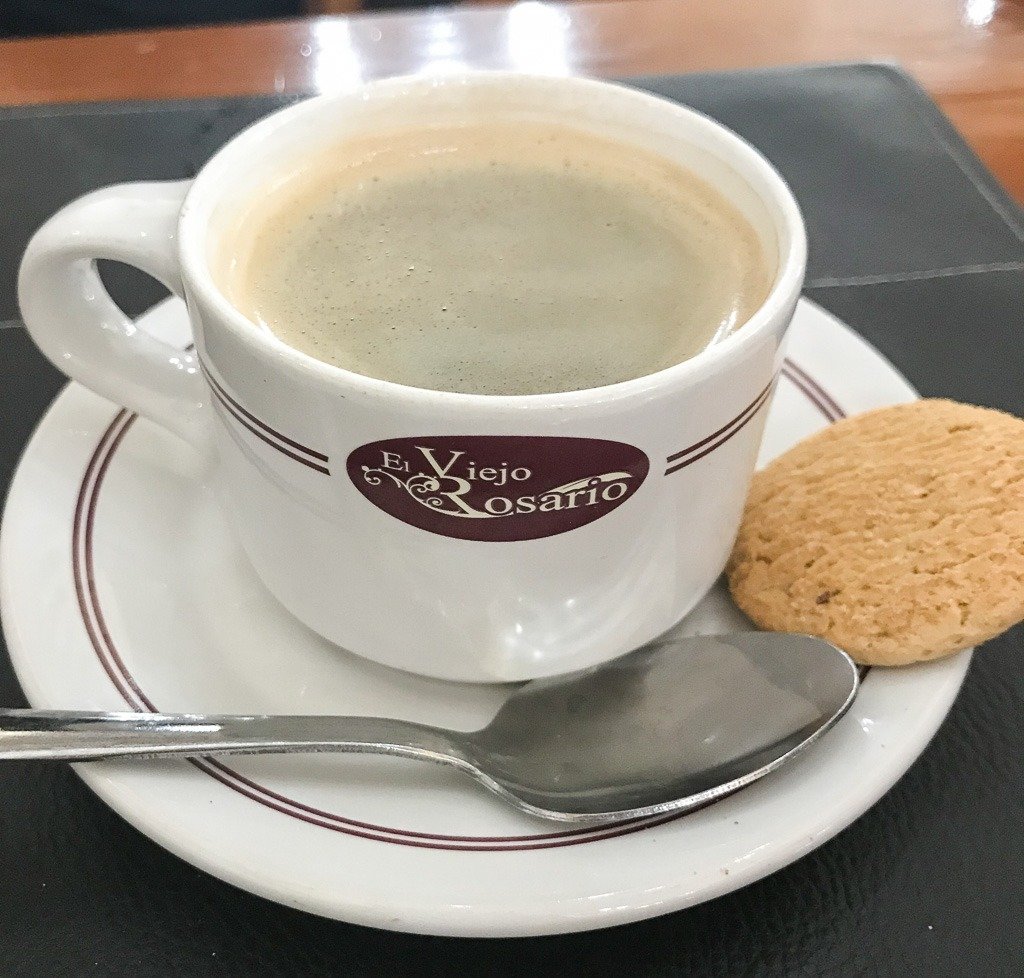 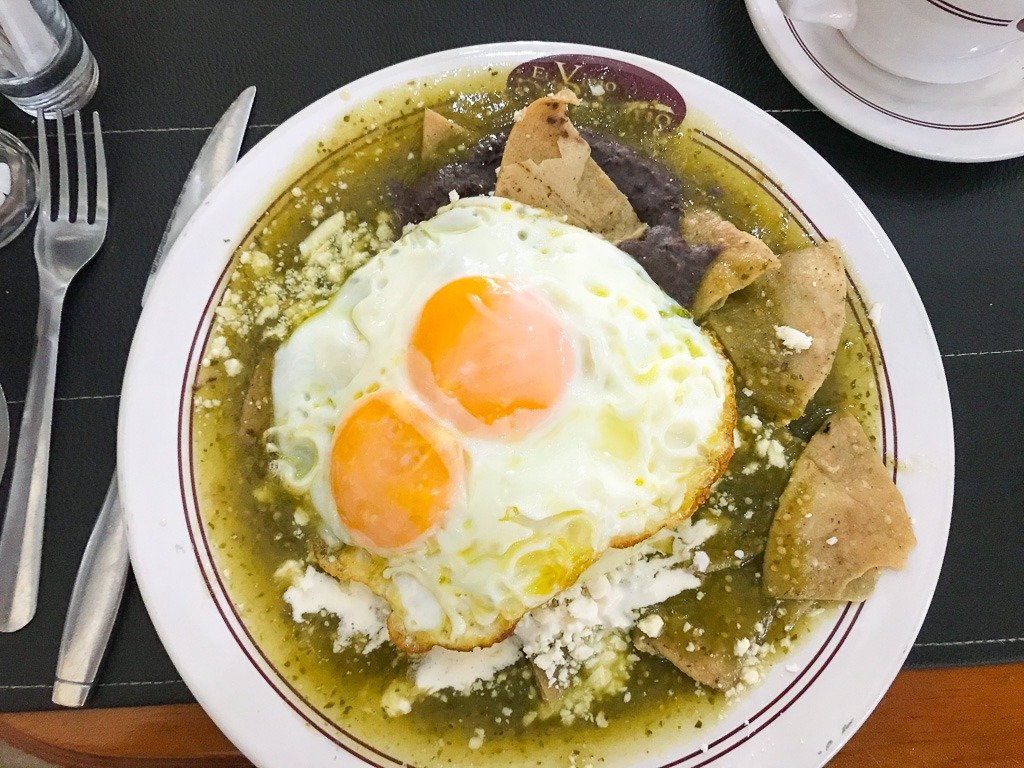 The best chilaquiles I’ve ever had!

This is one of the few late-night spots that we could find during our stay in Puebla.

After a few beers or glasses of pasita, we needed a few tacos and Los Angeles always helped us out with that.

I recommend their pastor tacos, their tacos árabe, and their pastor cemitas (a delicious fluffy sandwich roll filled with pastor, pineapple, cilantro, and onion!).

They are also open in the mornings if you want to grab a fresh juice or a breakfast taco. 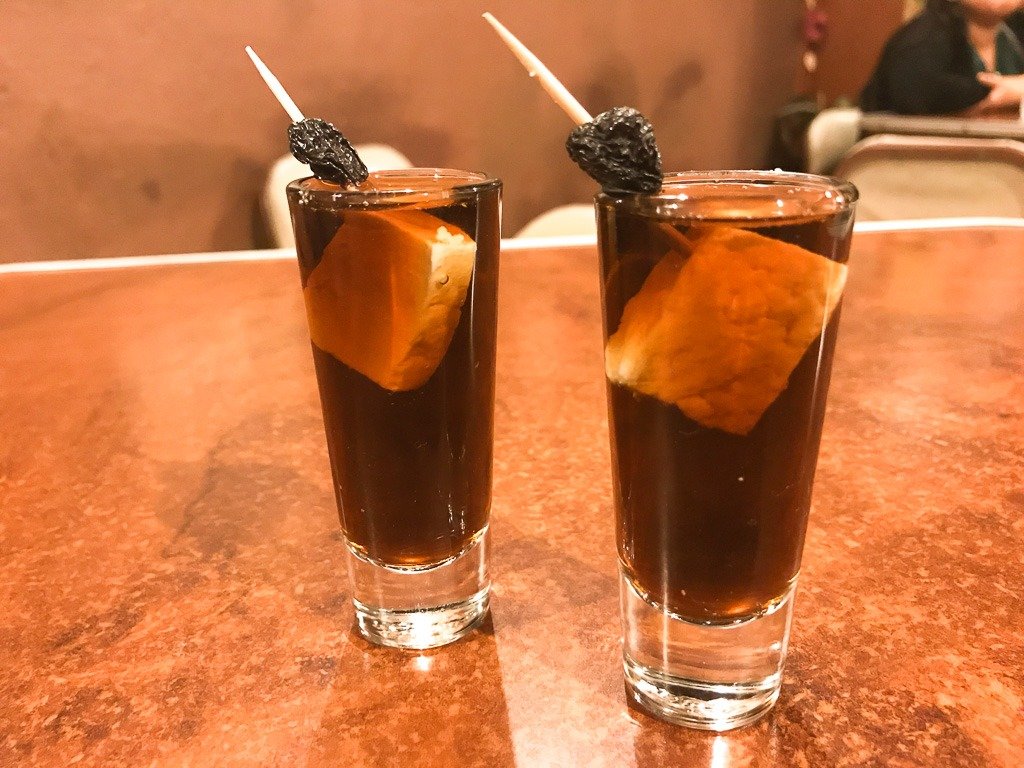 For a truly unique drinking experience, I highly recommend a visit to La Pasita.

According to several sources, this is the oldest cantina in Puebla. The interior looks like it hasn’t changed for decades. There are old signs, creaky chairs, and plenty of old Poblano men enjoying a few drinks.

There’s a huge selection of drinks (just check out that menu below!), but you have to try the original pasita.

It’s made with fermented raisins and inside on that toothpick is a piece of salted, aged cheese. Sip the drink, don’t shoot it. Then eat the cheese afterward. 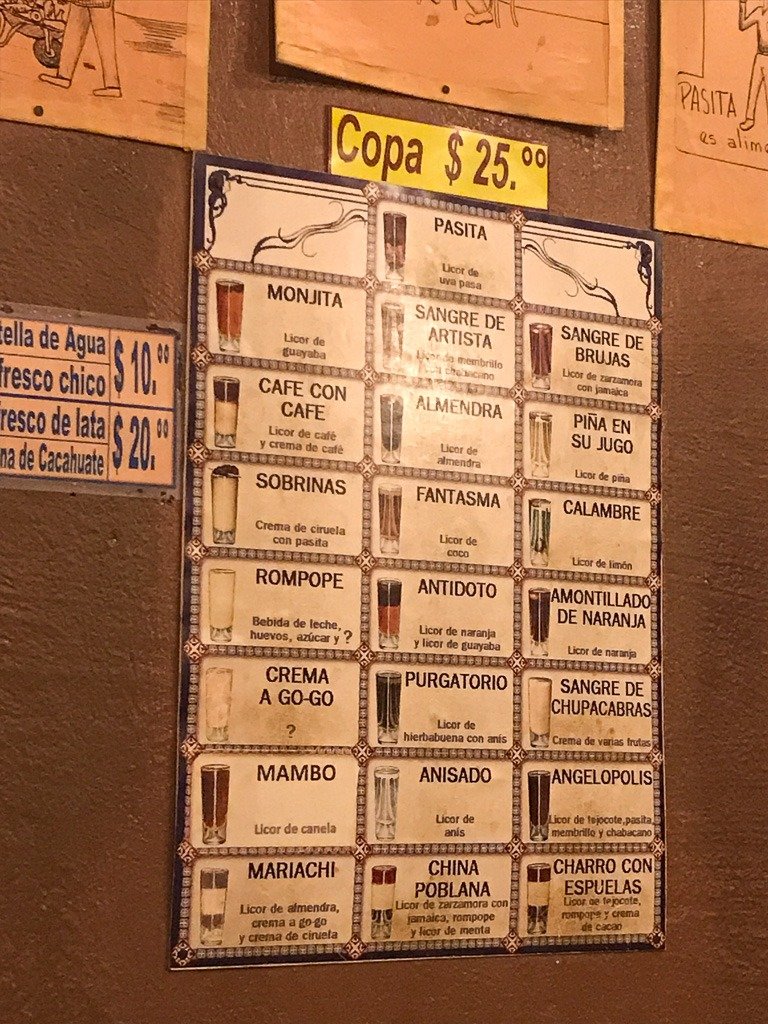 I also really enjoyed the monjita (it’s very sweet though), the mambo, and the almendra. I wasn’t brave enough to try the Rompopo, but it’s supposed to be a specialty of the area. 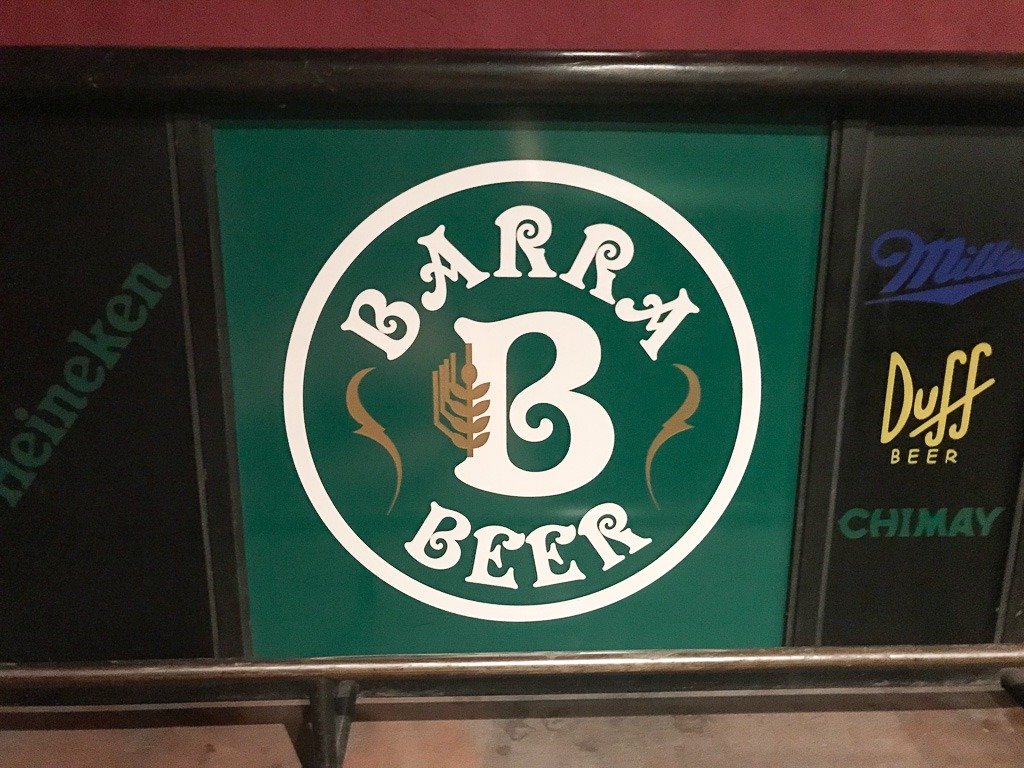 I went to this bar thinking that the fridges were going to be filled with craft beer.

Alas, it seems that this bar has recently changed hands and is no longer a craft beer bar (although they still carry a few bottles for the confused foreigners who show up).

Instead, you can get liter beers of cheap XX Lager or Indio and play pool for $1.50 an hour. It had a great crowd on a Saturday night and it was open late. 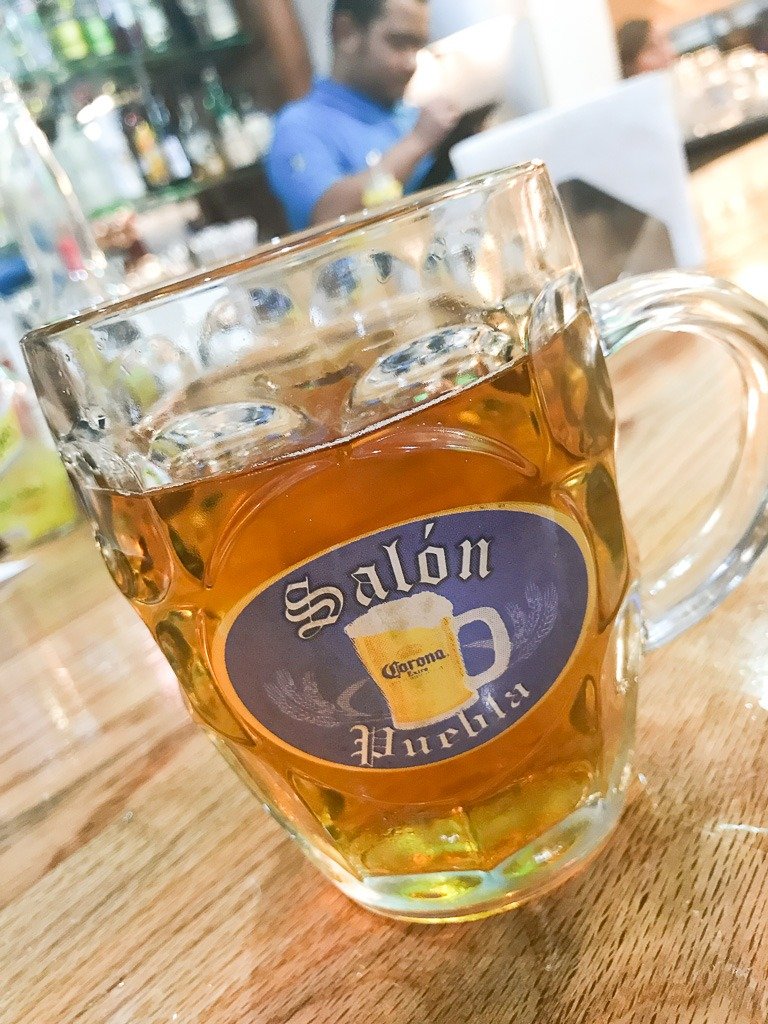 This bar is right in the zocalo, so you’d think that it would be crazy expensive, but actually the beers were very reasonably priced.

We headed straight to the bar and sat on stools to watch the bartenders zip around each other all night.

It’s a good spot to head if there’s a sporting event on. They have tons of televisions and you can easily while away the evening drinking corona on draft and snacking on beautifully cured Spanish ham. 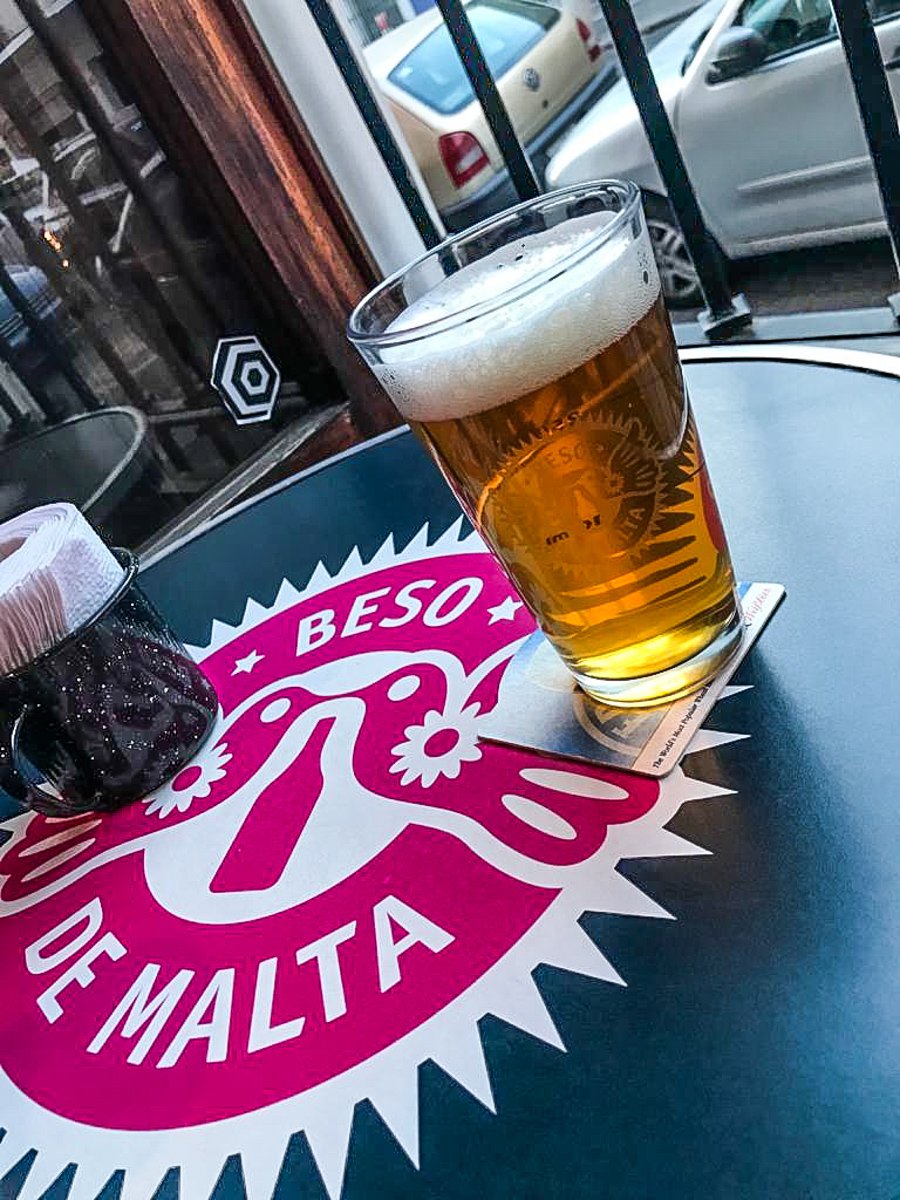 If you want to enjoy some local craft beer while you’re in Puebla, Beso de Malta is the place to go. They have 10 taps that rotate different Mexican craft beers with several from around Puebla and the nearby city of Veracruz.

The local brewery which I really liked was 5 day Mayo, but the beers from Veracruz were also delicious.

Whether you like IPAs and Pale Ales or Stouts and strong porters, they had at least one of each type on draft as well as a fridge full of other craft beers from around the country all for a relatively reasonable price.

They also serve food which looked quite delicious, but we were there for the beers. 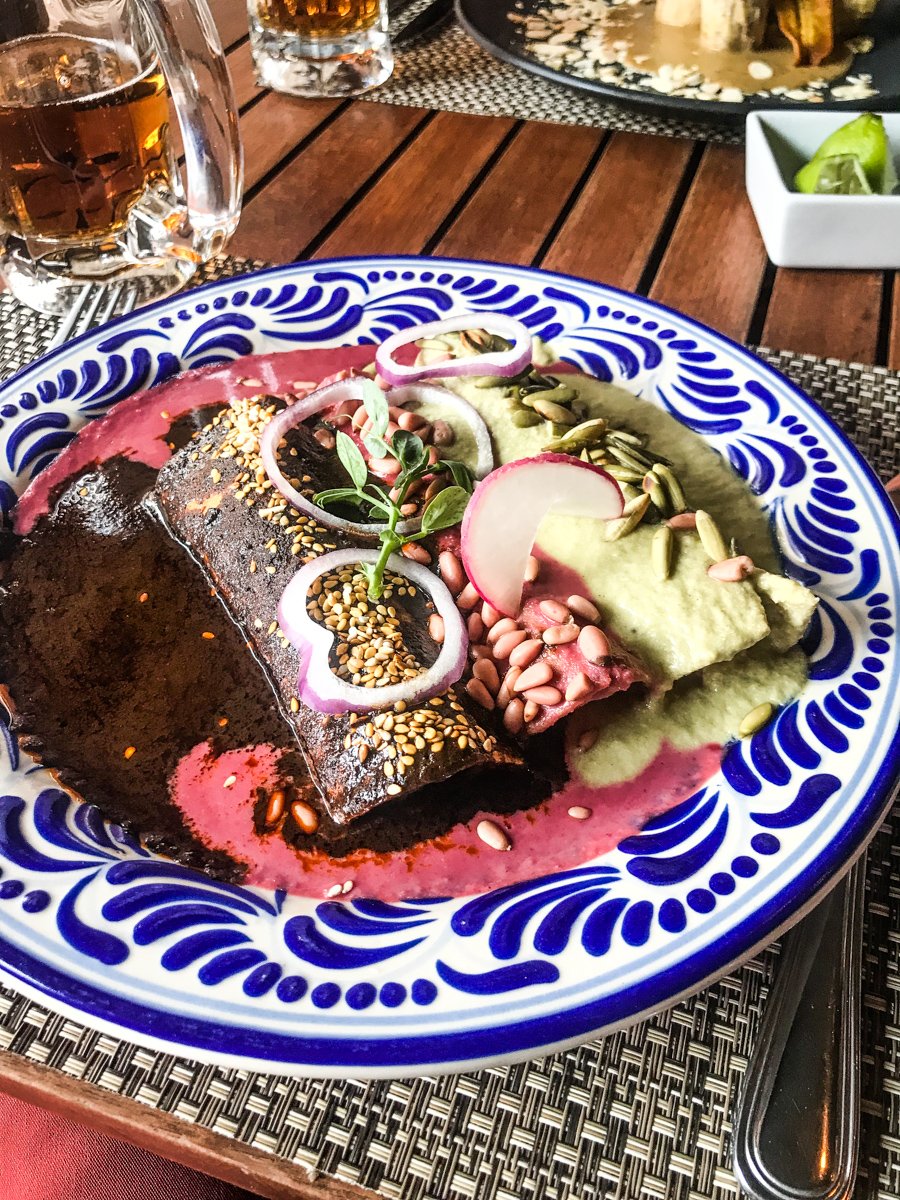 The 3 moles at El Anafre Rojo were absolutely delicious!

This was my last meal in Puebla on my most recent trip to the city and I absolutely loved the different options on the menu. Like many nicer restaurants in Puebla, it’s all about the mole and they’re making some unique flavors here.

El Anafre Rojo, in particular, was recommended to us by a tour guide we had while we were here. He promised it was his personal favorite spot for mole.

Whenever we visit Puebla, we try to have the mole sampler which is usually chicken enchiladas (or enmoladas) with three different mole sauces. So we had mole Poblano, mole pipian, and mola rosa, which was a new one for me.

We also had a dish of chicken stuffed with requeson cheese and topped with a mole that was made with almonds and passion fruit. It was sweet and salty and with a little bit of spice would have been the perfect mole.

Tacos arabe are perhaps Pueblas second dish after mole Poblano and there are tons of different places around the city serving up these fusion tacos.

Arabe meat is similar to pastor meat in that it is cooked on a schawarma-style spit. However, instead of having adobo flavors, there are more Middle Eastern flavors and spices used. They are also usually served on pita breads rather than tortillas.

La Oriental has several locations around Puebla, but the most conveniently located one is right in the Zocalo and there’s plenty of outdoor seating to have your tacos.

You can either order a few Tacos Arabe, or like Las Ranas, you can order a plate of the Arabe meat which is served with cilantro, onions, and a pile of tortillas to enjoy them with.

My meal at Comal was perhaps some of the best food in Puebla that I’ve eaten on both of my trips to this city. They have a little bit of everything including outrageously delicious cemitas, small but flavor-packed tacos, and plates of grilled meat with rice and tortillas.

I highly recommend the cemitas here, especially the pastor and the chilaquiles options. The chilaquiles with a fried egg on top was one of the most delicious things I’ve eaten in a long time. The tacos and other cemita meats are really nice because they are juicy without being greasy and the bread is light and fluffy. 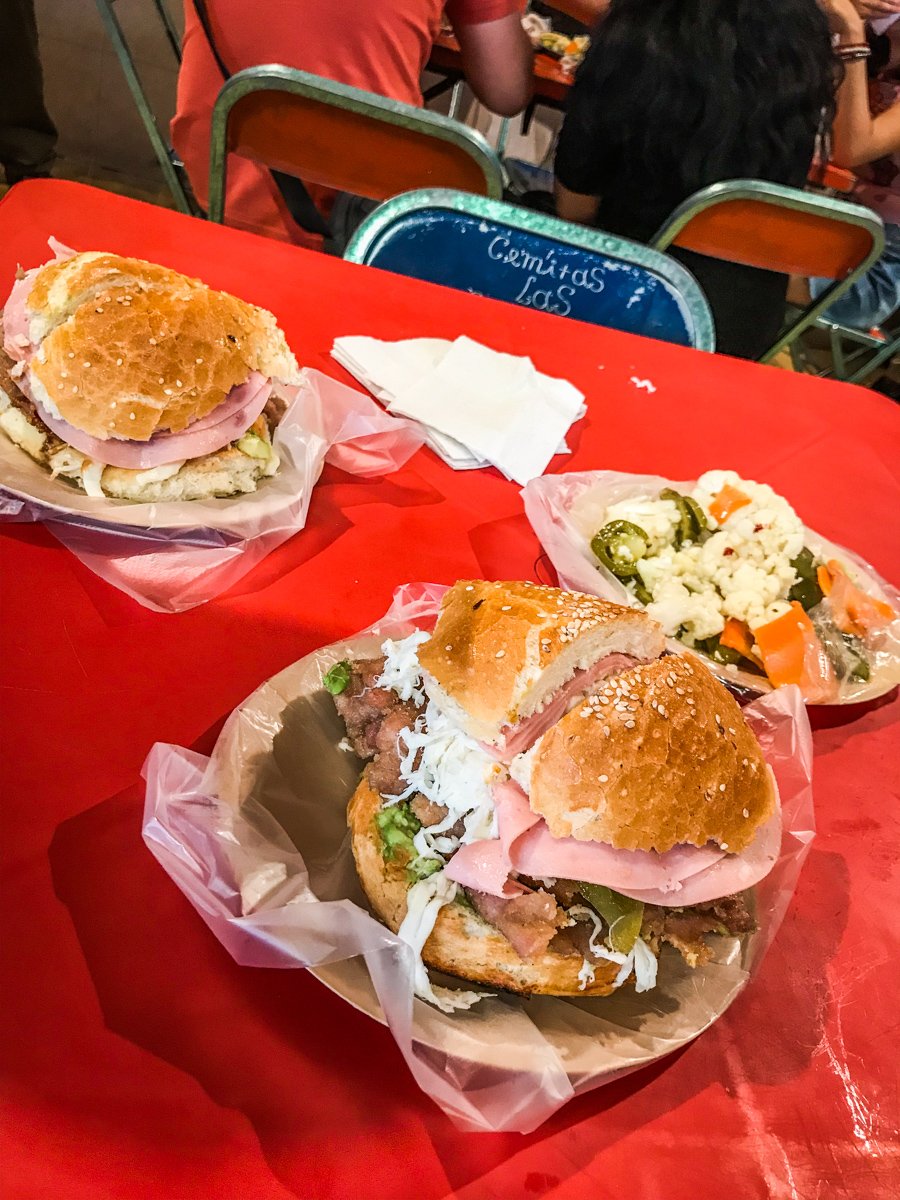 These are the enormous sandwiches you get from Cemitas Las Poblanitas 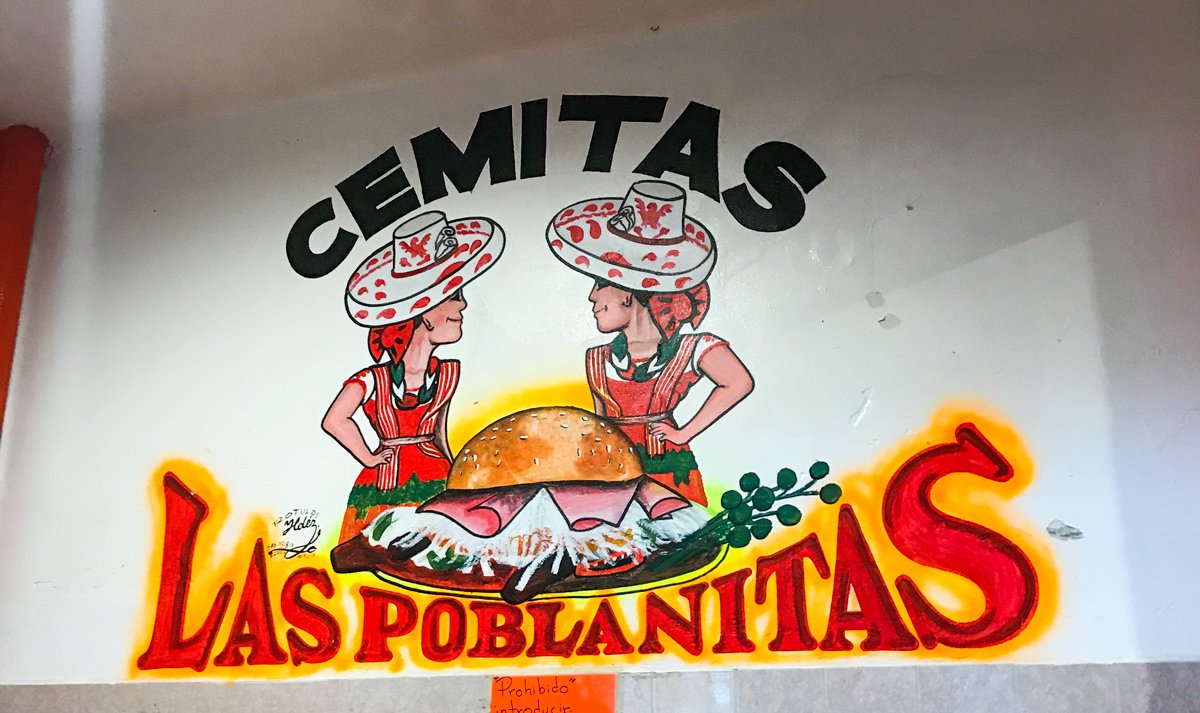 If you only have one cemita, which is a local sandwich here in Puebla, then this is where you need to have it.

The stand is located inside the El Carmen market, which is a neighborhood just outside of the center of the city. It’s less than a 10-minute walk from the Zocalo.

When you go into the market, head all the way to the right and you cannot miss the huge stand with a big Coca Cola sign that says Cemitas Las Poblanitas.

There are assembly lines of workers putting the sandwiches together and basically as soon as you order, your piping hot cemita arrives tableside. You can either have a milanesa (breaded and fried pork), ham, or shredded chicken.

I absolutely love the milanesa and because it’s piping hot it melts the cheese that comes on this sandwich. Just know that it is enormous. I can’t eat a whole one on my own, but Luke ate both all of his and the rest of mine, so great for hungry people.

The big and soft bread rolls are filled with your choice of meat along with a huge amount of avocado, cheese, jalapeños or chipotle, and a few slices of ham. On the table is a plate full of pickled jalapeños and vegetables to have with your sandwich.

These gigantic sandwiches only cost you 40 Pesos ($2). It’s perhaps the cheapest and tastiest meal in Puebla. 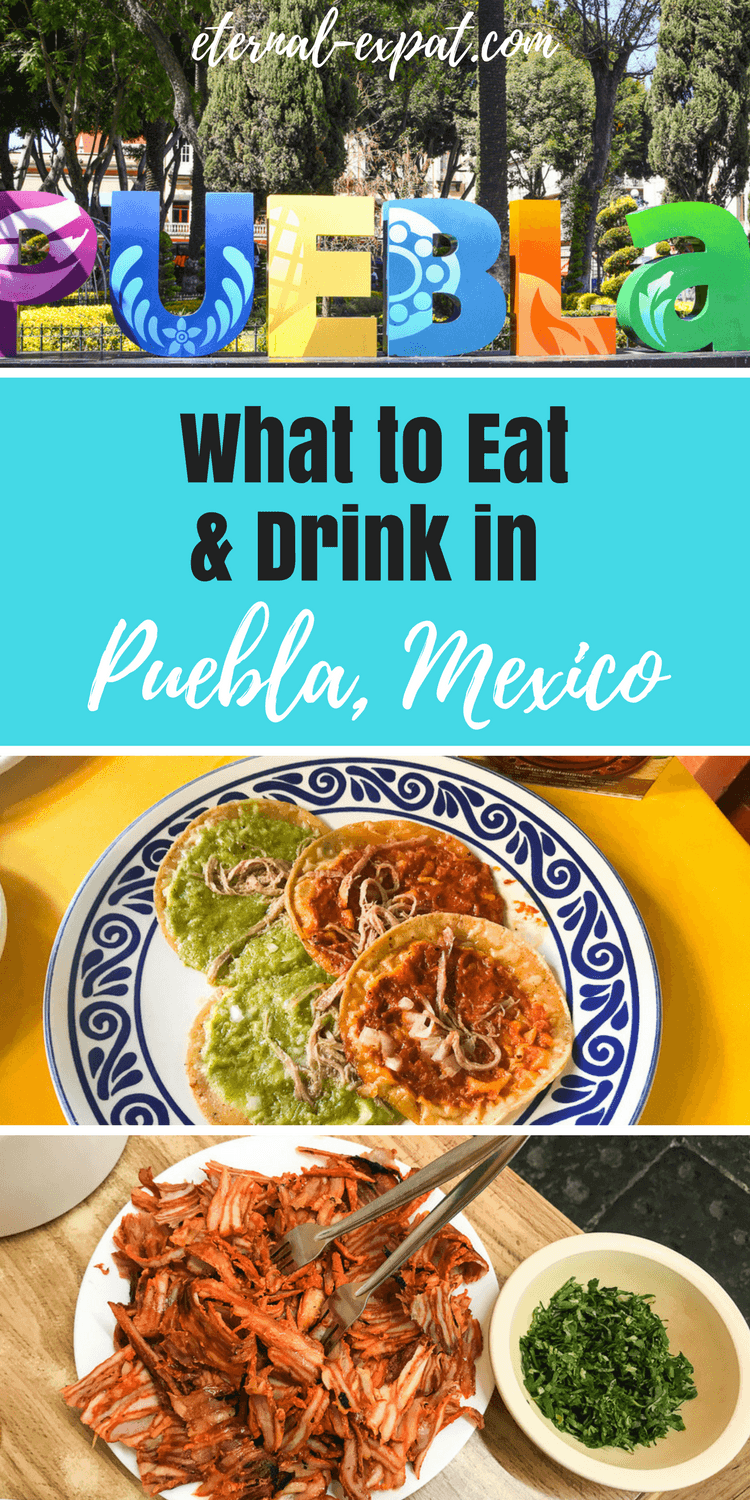 Headed to Puebla after Mazatlan for five days. Spending my birthday there. Looking forward to reading your advise for restaurants. Looking for a great one to celebrate. Tks a lot.