It was just over a month ago that I was lounging on the beaches in Costa Rica and hiking Manuel Antonio, and yet it already feels so long ago.

When I first started planning my trip to Costa Rica, Manuel Antonio wasn’t even on my radar.

I had big plans to head to La Fortuna to explore the Arenal Volcano and the surrounding area. Thanks to all of the amazing feedback from you guys on my Facebook page, I decided to skip Arenal and instead head south the Manuel Antonio.

I’m so glad I went to this region. It’s a little bit touristy, but the national park, the little village, all the seafood I could eat for less than $10, and the beaches were so freaking beautiful I genuinely didn’t want to leave. There are so many things to do in Manuel Antonio!

I spent five days in Manuel Antonio, but only went to the national park for one of the days. It’s big enough to spend about four-five hours walking and exploring, but not so big that you need more than one full day.

A Guide to Hiking Manuel Antonio 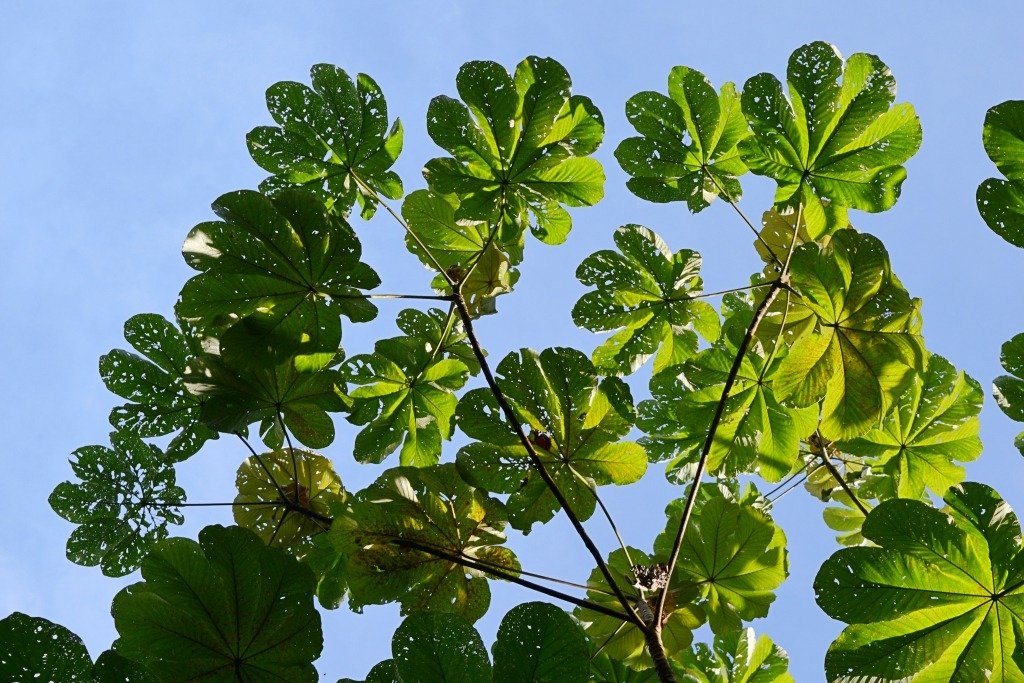 I loved the shape of these leaves – I spent most of my time in the park looking up!

How Much Does it Cost to go to Manuel Antonio National Park?

The entrance fee to Manuel Antonio National Park is $16 USD, or roughly 9,200 Colones if you’re going to pay in Costa Rican currency. They accept both at the park entrance.

I thought it was a little bit expensive for such a small park, but they do a really great job of upkeeping the park and making it a wonderfully safe place for the native animals to live.

The price of entrance is another reason why I only went to the park once. I probably would have spent another day here hunting for sloths and laying on the beach if it was less expensive.

Read: How Much Does it Cost to Travel in Costa Rica 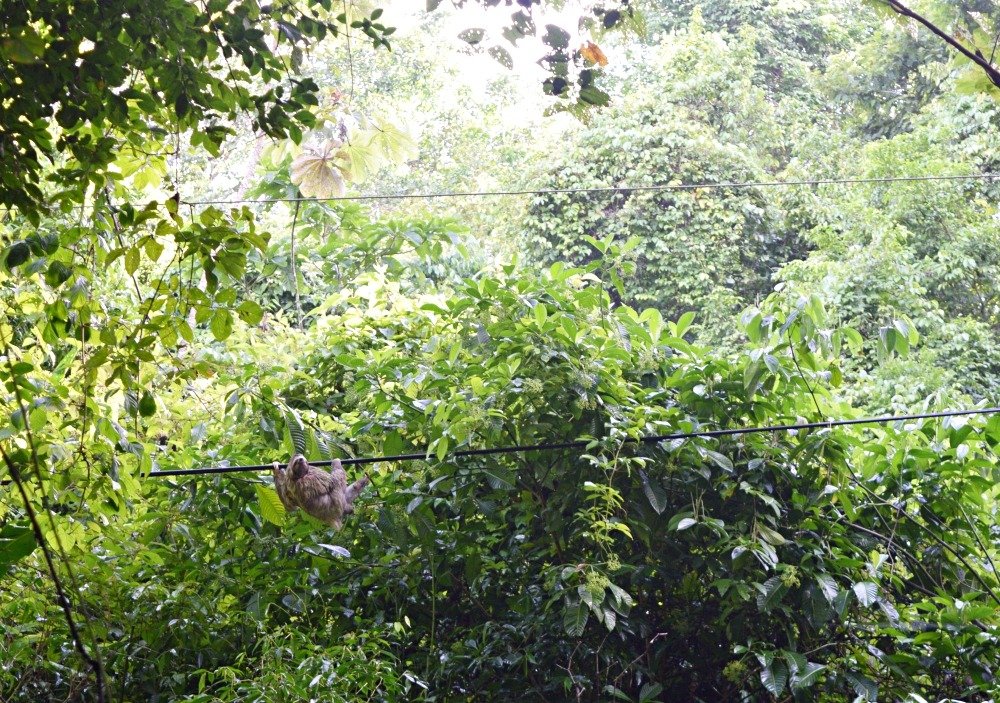 Sloth spotting – this guy stopped along this electrical wire and had a peek at us before carrying on his merry way.

Should You Get a Guide at Manuel Antonio?

At the entrance of the park, there are tons of guides who are touting their services.

They all have binoculars with cameras on them so they can spot animals that you can’t see with the naked eye and you can go home with pictures of sloths and green frogs even though you never actually saw them.

I didn’t hire a guide. I thought they were kind of expensive – $25 per person.

It’s not that I was on a particularly tight budget, I just couldn’t justify paying that much for a guide when instead I could explore the park at my own pace and try to see the animals that wanted to show themselves. I ended up seeing three sloths and tons of monkeys.

In the end, I’m really glad I didn’t hire a guide. The park has two sides.

When you enter, you walk down the main path.

Then you can turn left where you go off into the jungle a bit. To the right are the beaches and bathrooms. Every guide I saw only turned right, so if you were touring with a guide, you didn’t go left at all. I’m sure once the tour is over you can stay in the park and explore on your own, but that kind of irked me.

It’s completely your decision. If you’ve come to Manuel Antonio to see green tree frogs, tons of sloths, and unique birds, and you want to know more about the park, hiring a guide might be exactly the thing you’re after. 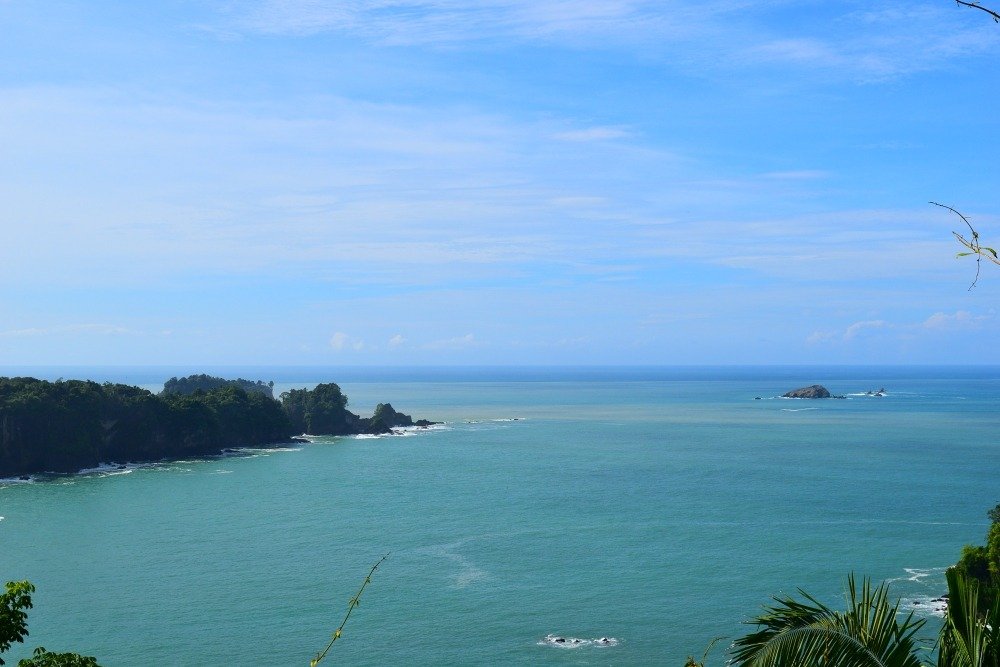 one of the best views I got after climbing up TONS of stairs. Worth it!

What to Bring (and What NOT to Bring) to Manuel Antonio

Bring a full water bottle. There are three water taps in the park where you can refill your bottle with drinking water, but it gets really hot and you’ll definitely want to have some to start the day with.

Bring plenty of fruit and sandwiches to sustain you for the day. There is nothing to buy inside the park and after a morning of hiking, you’ll be starving. There are picnic tables where you can sit and eat your lunch, just beware of thieving monkeys.

Don’t bring chips. We bought a bag of chips and they wouldn’t let us bring it into the park. Packaged snacks are a no-no. The Rangers don’t want people feeding them to the monkeys or having the sneaky monkeys steal them from your bag. 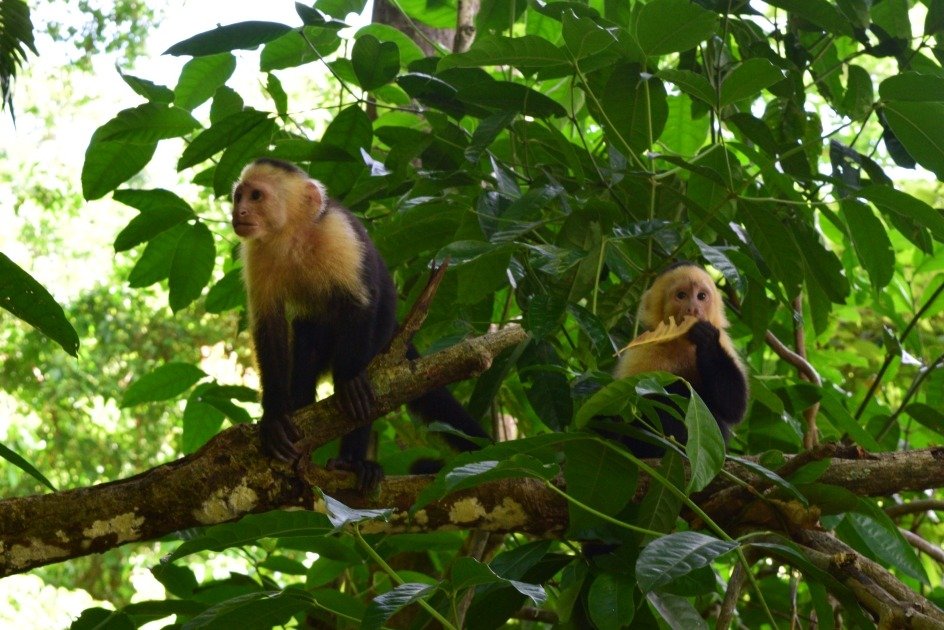 These cheeky monkeys will steal your lunch if you’re not careful!

When to Go to Manuel Antonio

I visited the national park in early July, the middle of the wet season.

The weather was really nice in the early morning, so I arrived when the park opened at 7 am. This was actually perfect because there were hardly any people there. I had a lot of the trails to myself for the first two hours.

When I left the park around 1 pm, there were tons of people in the park. There was spacey any sapce to put down a towel at the beach.

It’s also good to know that the park is closed on Mondays. If you’re only planning to be in Manuel Antonio for a day or two, be sure to plan accordingly. 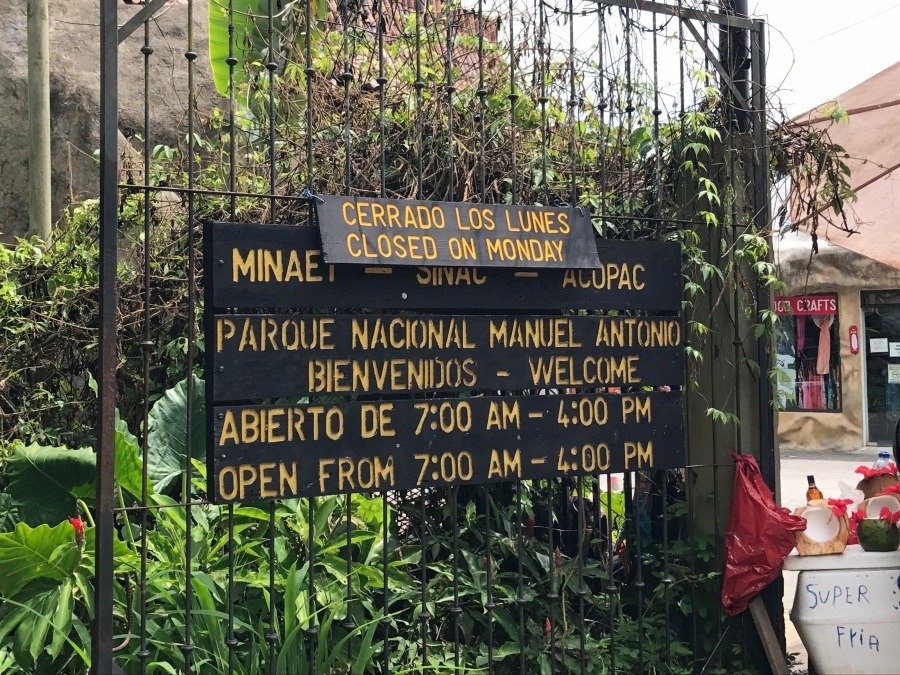 What to See in Manuel Antonio National Park

One of the main reasons I wanted to go to Manuel Antonio National Park was to see sloths. The park has one of the highest concentrations of sloths in the country. I find them incredibly fascinating and the park did not disappoint. 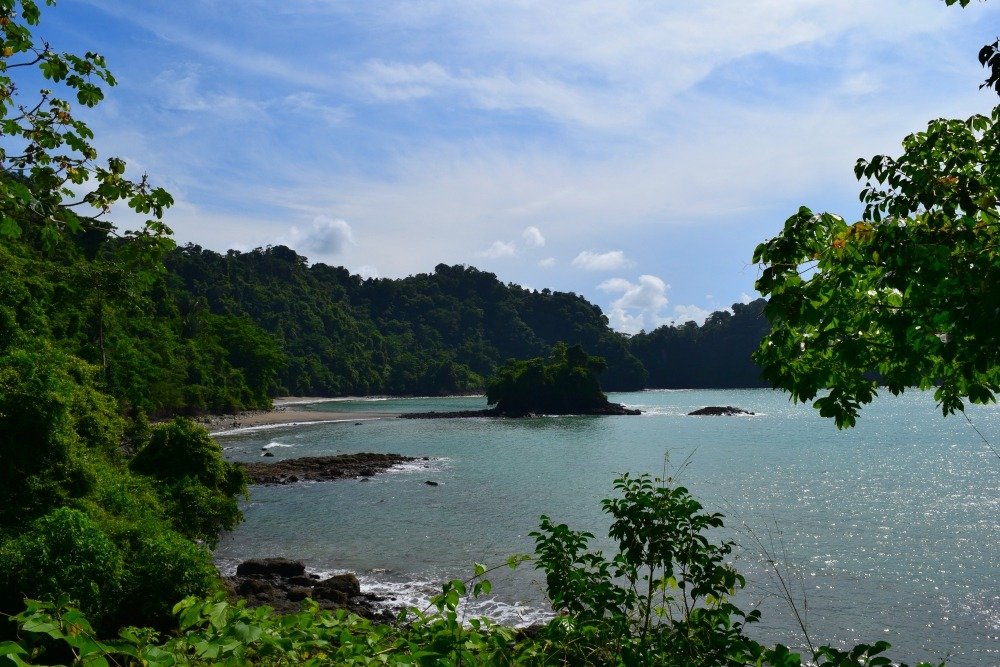 This little viewing platform was packed with curious capuchin monkeys.

I was very lucky indeed – I saw three beautifully majestic sloths and I literally squealed with joy because they are the coolest things I’ve ever seen. They literally look like muppets. They also aren’t as slow as I’d imagined them to be, so there you go.

There are tons of monkeys in the park too who are more than happy to come up to you and see what food you might have.

There are toucans in the park, but they’re very rare. Much to my dismay, I didn’t see any during my trip to Costa Rica. Maybe if you hire a guide your chances are better? 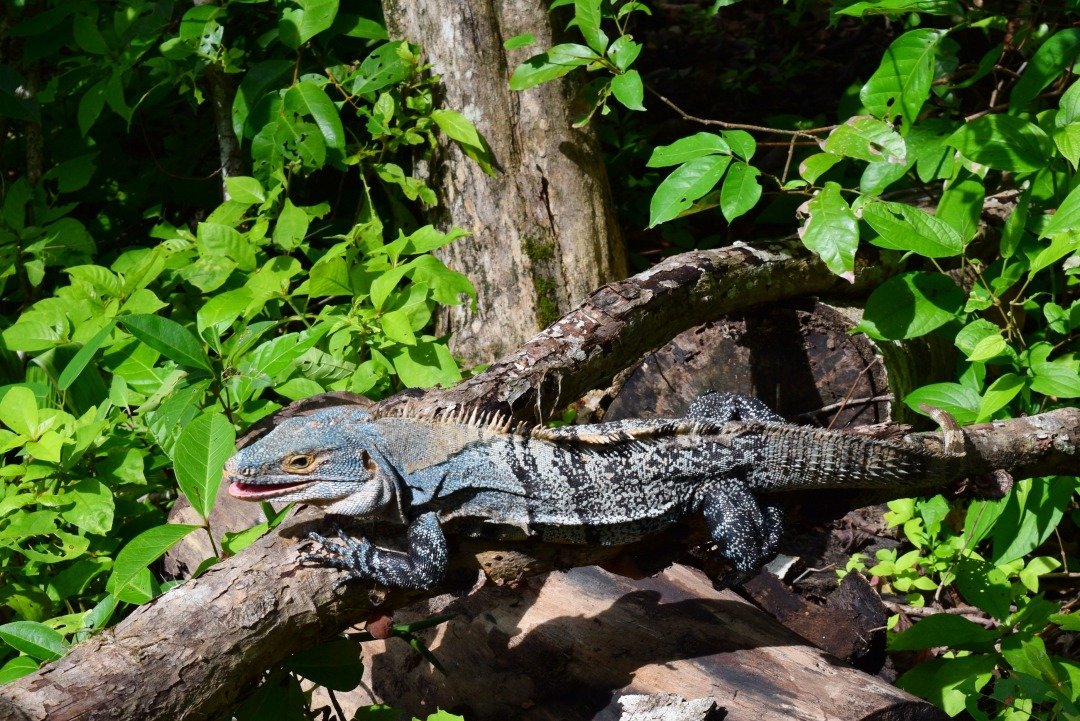 This one of four or five iguanas I saw lounging on the beach in Manuel Antonio. He even smiled for the camera!

I saw tons of iguanas basking in the sun and like I mentioned above, it’s possible to see red-eyed tree frogs, but you’ll definitely need a guide if you want to find one of those little guys.

The two beaches are also worth visiting in Manuel Antonio.

Playa Manuel Antonio faces a really calm bay and the water is perfect for swimming. This beach gets a little bit more crowded than the one on the other side of the peninsula, Playa Espadilla Sur. Both are really great for sitting in the sunshine. 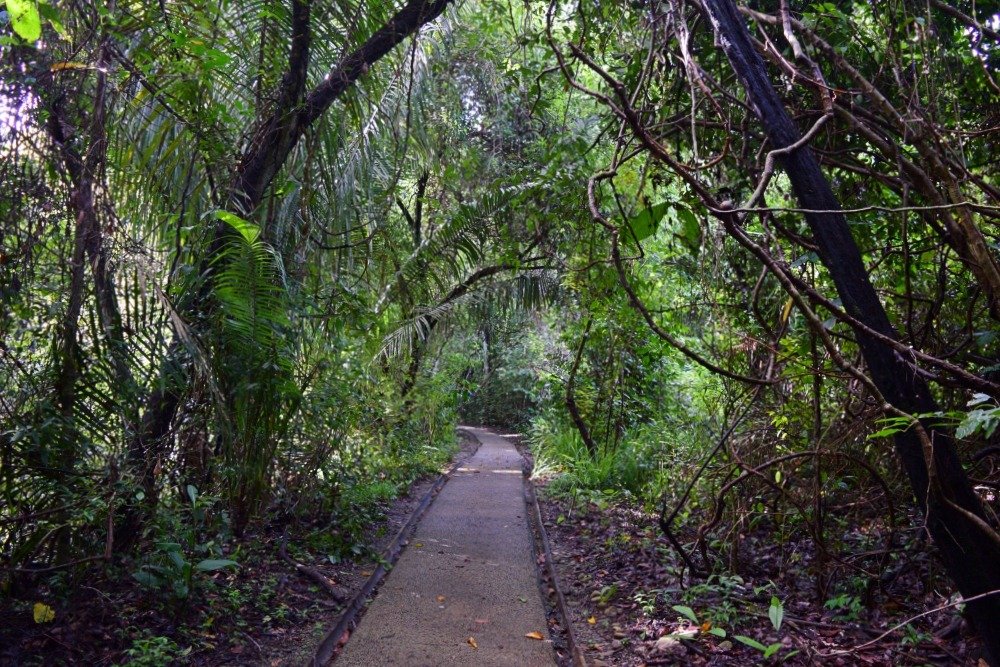 Most paths are flat and paved like this one. No need for heavy duty hiking books!

What to Wear to Manuel Antonio National Park

I hiked the park in sneakers and packed a pair of flip flops for the beach. You could easily walk the park in sturdy flip flops or hiking sandals. The paths are flat and either paved or covered over by a boardwalk. There are a few steep paths and stairs to battle with, so make sure you’re wearing a pair of shoes that can handle that.

I wore jean shorts and a t-shirt and I was COVERED in sweat. The shirt was literally stiff the next day after drying. I wish I’d worn a loose-fitting tank top instead. Wear whatever you feel comfortable walking in, but know that it is far more humid in the park than it is near the beach, so you’re going to sweat a lot.

Read: What to Wear in Costa Rica in Wet Season 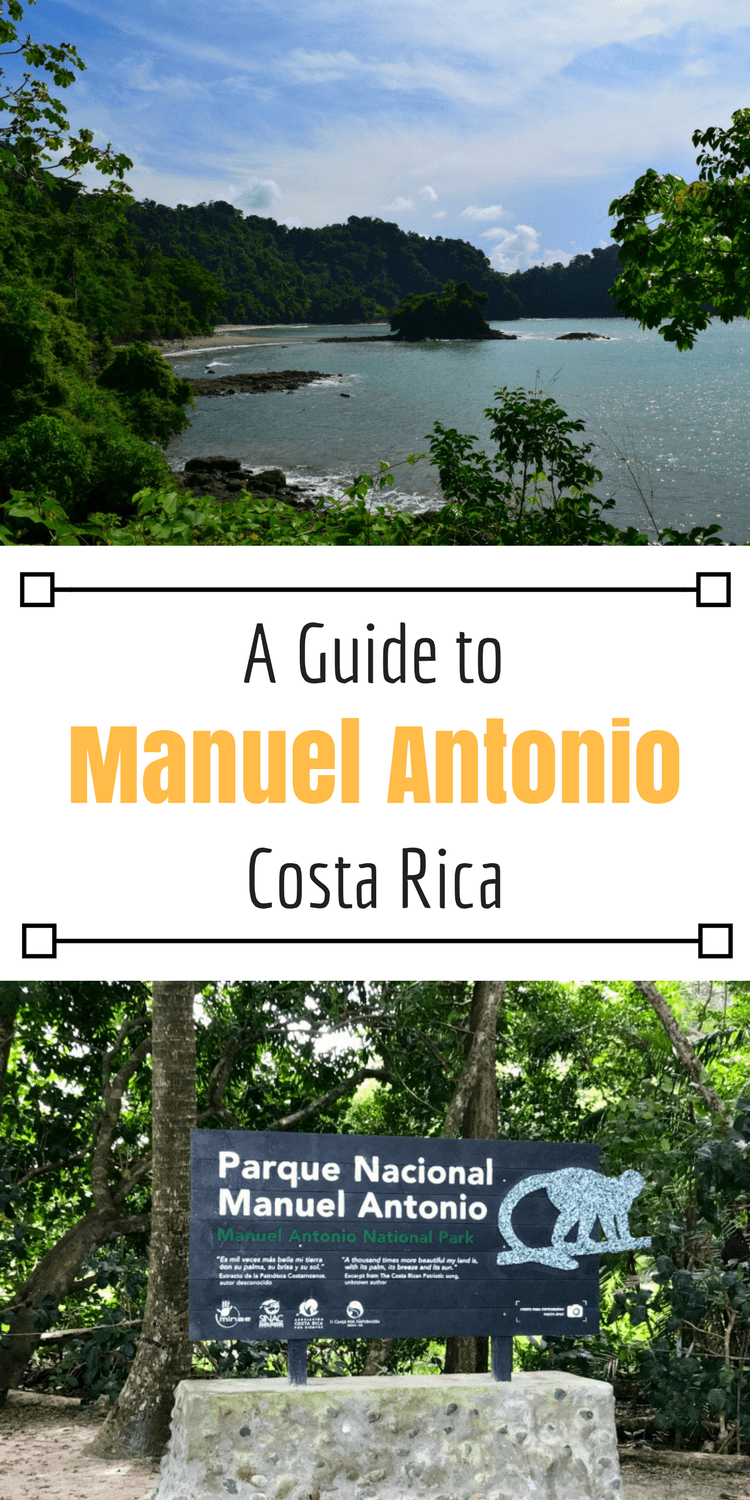