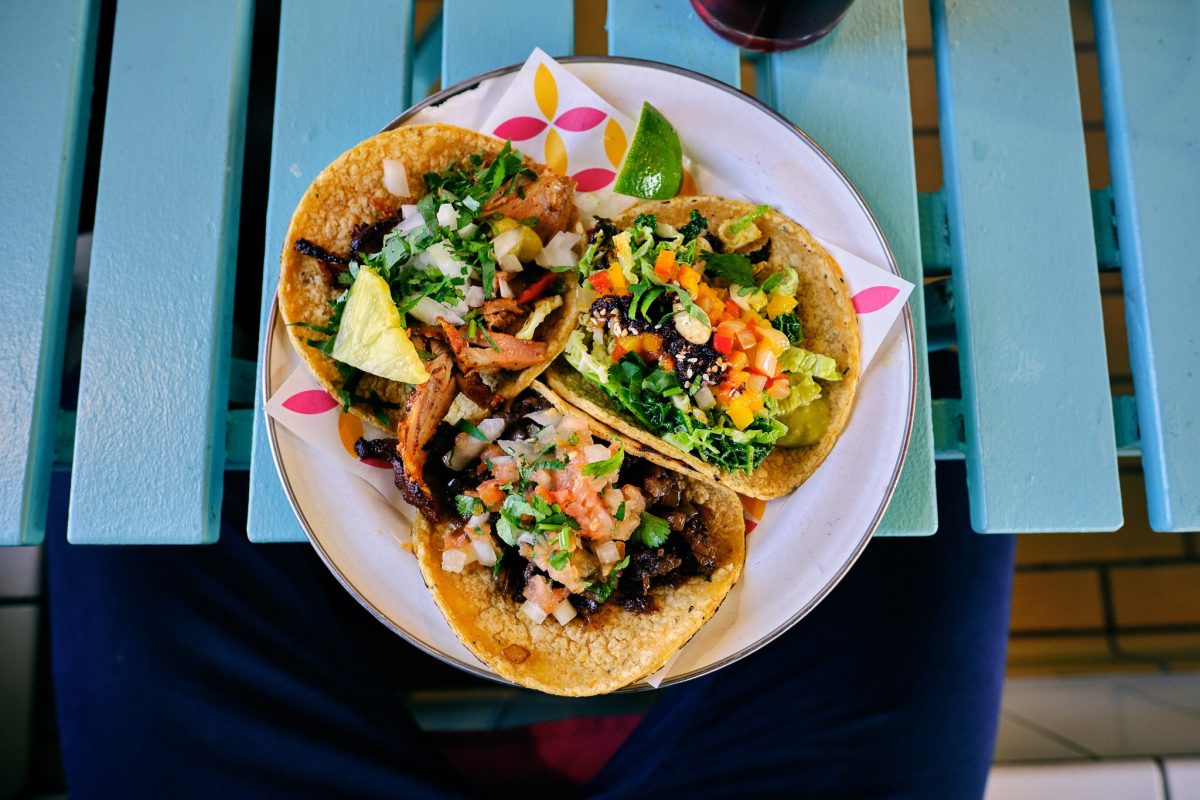 If you’re planning a trip to Baja California Sur and want to enjoy some seriously good food, this post will break down the best restaurants in La Paz Mexico that I absolutely loved. La Paz is slightly more local and definitely much cheaper than neighboring Los Cabos and it’s packed with seriously good eats.

This list is a combination of seafood spots, street stands, cheap taco restaurants, and nicer restaurants. I’ve also thrown in a few of my favorite craft beer bars in La Paz so that you don’t miss out on some good watering holes, too.

It’s worth noting that seafood is more of a lunchtime thing here in Mexico, so most of the best seafood restaurants aren’t actually open for dinner. Do as the locals do and have your biggest meal around 2 or 3pm!

Corner of Mariano Abasolo and Sinaloa

It is by far my favorite restaurants in La Paz and according to every local we spoke to, it’s the best seafood restaurant in La Paz. We loved it so much, we raced back to our Airbnb to check out early and eat here one last time before we left.

It’s all about the seafood here. I absolutely loved all of the shrimp dishes of which there are many on the menu.

They also made some of the most tender octopus I’ve ever had. We also tried the ceviche which was fresh and zingy.

If you don’t like seafood, there’s no real point coming here because there is very little on the menu that doesn’t have seafood in it.

This is a great breakfast option if you love big Mexican breakfasts. We had delicious chilaquiles here one morning.

If you aren’t familiar with chilaquiles, it’s basically a plate of tortilla chips topped with salsa, onion, cream, cheese and a meat of your choice. I usually go for eggs, but Luke loves it with steak or pork.

They also have omelets, Mexican style egg dishes, and molletes. The coffee was very tasty and we got free refills for our whole meal.

They are actually open all day long, so if you want a nice lunch or a hearty dinner and enjoy grilled meats then definitely stop by here. The portions are huge and the prices are not huge!

Daily 10am-2am (until 7pm on Wednesdays)

These aren’t the burritos you’re used to back in the US.

Burritos in Mexico are usually only filled with meat and cheese. No rice, no guacamole. Sometimes there are refried beans inside.

You can of course, add any sauces, limes, or onions that you want.

These burritos are indeed super. They’re huge and the meat is really nicely cooked, especially the asado. We also had a papa rellena here and it was one of my favorites mostly because it was equal parts cheese and potato.

When it comes to late-night eats, this is definitely one of the best restaurants in La Paz for comida corrida.

This place was right around the corner from our Airbnb and it was always busy for lunch.

They make really delicious ceviche tostadas as well as awesome fried fish tacos. I think it’s one of the lighter lunch options if you enjoy seafood. You can get grilled fish in your tacos or have a grilled fish with rice. It’s only open for lunch.

We stumbled upon this place (or perhaps we stumbled into it?) after having a few beers and we had truly some of the most delicious tacos I’ve eaten in Mexico. It is without a doubt one of the best restaurants in La Paz.

The tacos are grilled up fresh to order and there is a huge buffet of sauces and toppings to choose from which I loved.

There is also a popular dish which you’ll see on the menu at every taqueria around La Paz: Papas Rellenas.

It means stuffed potato and it’s basically a glorified baked potato but Mexican style. It has a crispy skin and a fluffy potato inside and is topped with cheese, a meat of your choice, and sometimes cream and onion.

Then you can bring it to the sauce buffet and top it up even more. They’re always served with piping hot tortillas so you can make potato tacos. It’s heavenly (even if you haven’t had a few beers beforehand).

This is one of the most famous places in the city to head for a taco. Every time we asked for a good spot for good tacos, locals sent us here. They aren’t wrong. The asado here is the best we had in La Paz. They also do great pastor and a very tasty papa rellena.

The thing that I also liked about this place was that it felt like a much nicer restaurant than most of the other taquerias that you head to.

So if you want to enjoy a few beers or cocktails, have a big plate of tacos and chat with your family over your meal then this is the best place to do that. It’s open 24 hours a day, so you can literally have your fill of tacos whenever the hunger strikes!

I headed here on a recommendation from an expat who lives here and I really loved the asado.

It’s a stand that opens at night and serves tacos until the wee hours. There are a few plastic tables and chairs where you can sit and have a few tacos, but it’s not a place to spend a ton of time. They also serve sodas.

This is another place that everyone talked about. It’s the place that comes up the most when you search for good fish tacos and it’s the one that locals recommend if you want a traditional Baja-style fish taco (battered and fried fish fillet in a flour tortilla).

It’s not just tacos though, as I learned when we ate there.

They also have lobster, shrimp, marlin (one of my favorite options in any taco/burrito spot in Mexico!), octopus, and even beef and chicken options. You can have these in empanadas, quesadillas, tacos, burritos, or even on a plate with some rice and tortillas on the side.

For a healthy breakfast option, I highly recommend a smoothie or juice from Fruta Vita.

Coming from Mexico City where there are juice stands on every corner, I was surprised that there weren’t more healthy options around La Paz. If you enjoy smoothies or want something other than tacos while you’re visiting, then definitely head here.

She has fun options like Piña Colada smoothies made with coconut water and pineapple.

She also makes fresh ginger shots, celery juice, or simple banana smoothies. If you don’t like one of the options on the menu, she’ll make you one with whatever fruits and vegetables you want (as long as she has them)

So to pay a little homage to him, the Costa Baja Resort in La Paz have named their very best restaurant after him. If you want a truly decadent and high-end food experience, this is one of the few places in La Paz to have it.

It’s definitely one of the more expensive options and you’ll want to bring a nice outfit to wear (and perhaps make a reservation during busy periods), but the seafood here is meant to be truly spectacular.

Tuesday to Thursday 6pm-midnight, Friday and Saturday until 2pm, closed Sundays and Mondays

For those that want to try some craft beer that’s actually made here in La Paz, you have only one option: Cerveceria Paceña.

Here you’ll be able to try whatever beers they’re currently brewing. You can simply have a pint or you can have a flight of beers. They were incredibly friendly here and let us try a few different beers before we settled on what we wanted to drink.

Just outside the restaurant is a food truck that is always parked there so that you can have a few beers as wells as some good pub food.

It’s mostly tacos, sandwiches, and pizzas, but it looked good (we just had the beer).

They also do something that very few bars in Mexico do, they give you free snacks to have while you drink. They have a popcorn machine at the bar and they freshly pop some every few minutes to fill up in a bowl for you. Loved that.

This is the best-located bar in La Paz. It’s right on the Malecon (boardwalk) and all of the seats are on the rooftop.

Head here for sunset to enjoy some craft beers and a little bit of pre-dinner food. I don’t recommend having dinner here – the food was overpriced and didn’t look that great. There are so many amazing options (as I’ve listed above!) that I wouldn’t waste a meal here.

However, the beers are definitely worth your time. The majority are from nearby Cabo San Lucas with a few other draft options from around Mexico. They also have bottles of beer and a very small wine selection. Try to get a seat facing the waterfront for the best view of the sunset. 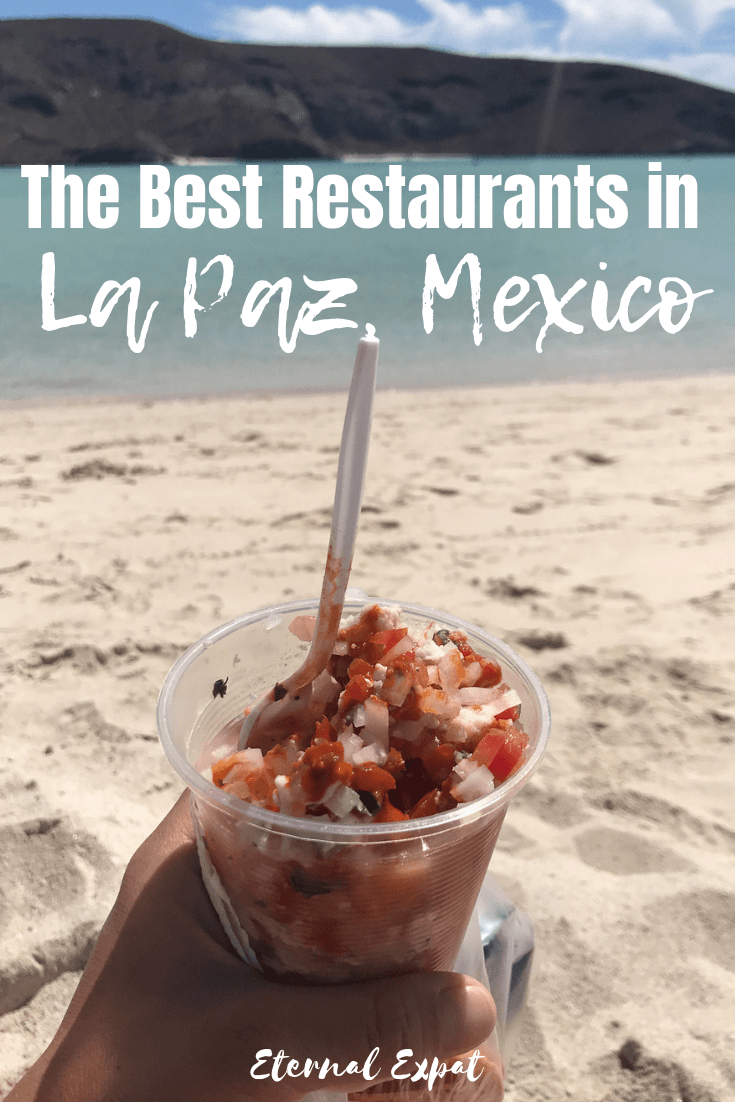 2 thoughts on “The Best Restaurants in La Paz Mexico”