Los Cabos is Not What I Thought it Would Be 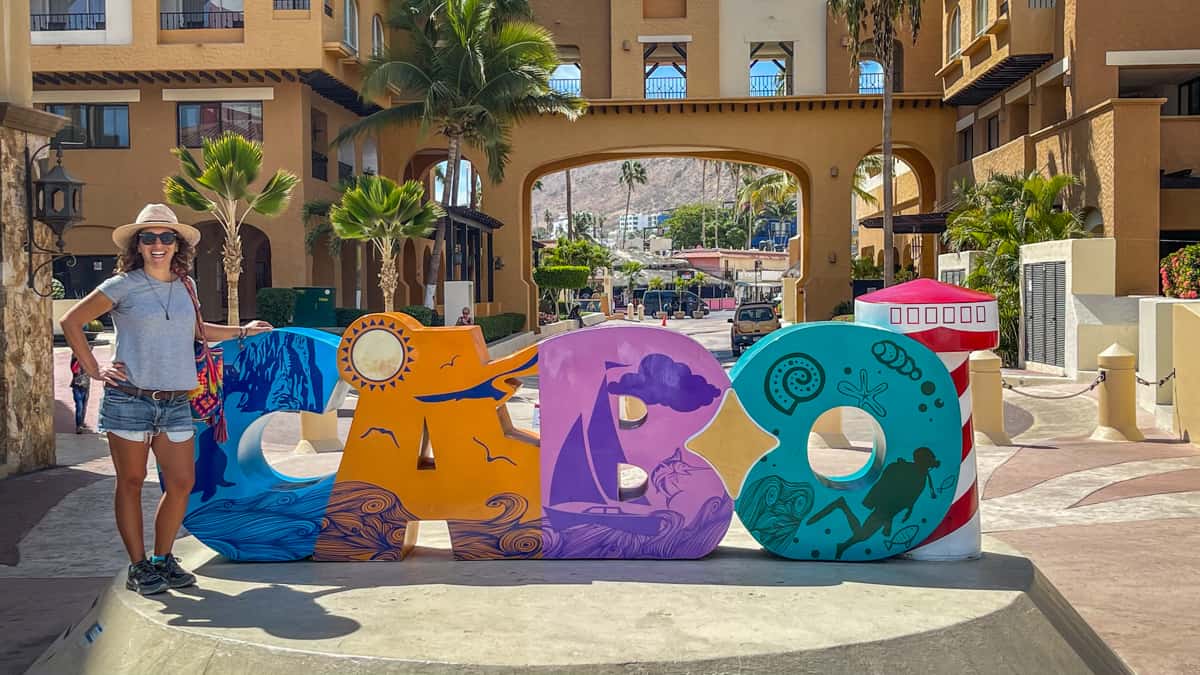 I’ve been living in Mexico now for almost five years. I have spent the majority of that time living in and exploring Mexico City, however, I’ve also spent a whole lot of time traveling to other areas of Mexico.

I’ve fallen in love with cities like Oaxaca, Guadalajara, Monterrey, and Puebla. I’ve enjoyed the food and culture of the Yucatan Peninsula and the beaches along the Riviera Maya. I’ve driven the coast of Jalisco from Barra de Navidad to Puerto Vallarta and explored the beauty of places like Sayulita and Puerto Escondido.

I’ve even sipped craft beers in Tijuana and eaten street food in Ensenada and enjoyed the beaches and islands around La Paz.

Where is Los Cabos Mexico?

If you’re confused about Cabo vs Los Cabos, let me explain.

Cabo San Lucas is a city in the state of Baja California Sur. San Jose del Cabo is also a separate neighboring city of Cabo.

Los Cabos is the municipality, or county, where you find the city of Cabo San Lucas as well as the city of San Jose del Cabo. I used to think it was just a nickname for these two cities, but it also includes areas like Cabo Este (the East Cape) and a few small towns and hiking areas like Santiago and Miraflores.

What I Thought Cabo Was Going to Be Like

There’s something about the rest of Baja California Sur, or should I say, Los Cabos, that has kept me away.

Around the rest of Mexico, Cabo has a reputation and I believed all of what I heard. It’s just a party town. It’s just a resort town. It’s the most expensive place in Mexico. It’s boring. The food is just over-priced Tex-Mex restaurants. There’s nothing to do there if you don’t say in a resort.

Then at the start of the year, we found ourselves looking at a map of Mexico and wondering where we would want to spend the rest of the winter. Where would there be enough for us to explore? Where haven’t we been yet that we want to get to know?

How We Ended up in Los Cabos in the First Place

The state of Baja California Sur stood out to me. The year before, I had been in a book club with other Spanish learners where we read a book in Spanish and talked about it in Spanish. Most of the women in the book club lived in the town of Todos Santos. They all raved about it, they shared their experiences and photos and, I had to admit, it looked kind of cool.

Well, it is cool, if you have a car. Which we don’t. So after a month of enjoying Todos Santos by bicycle, we thought we’d head back to Laz, a city we know quite well and that we really love. We know it’s affordable to live short-term and we knew it would be a good base for exploring other neighboring towns like Los Barriles and La Ventana.

But friends kept telling us to check out San Jose del Cabo. It’s like Todos Santos, but walkable. It’s full of culture, the food scene is great, and the beaches are beautiful, they all said.

So we packed our suitcase and got on a bus to San Jose del Cabo. We booked a hotel in the downtown area for two nights and told each other that if we could find a furnished rental for a month within our budget, we’d stay for the month and see what all the hype was about.

Why I Fell in Love with Los Cabos

One month quickly turned into three. As soon as we got here and found a centrally located apartment we knew we were somewhere that could be our home.

If you feel like you always have to choose between a trip to the mountains and a trip to the beach, then you will love this region of Mexico.

There are hiking trails all over the place even just within a short distance from downtown Cabo San Lucas or San Jose del Cabo. We have hiked almost every single weekend we’ve been here and we have never repeated a trail.

If you like windsurfing, bodyboarding, surfing, or mountain climbing, it’s all possible here and its all so close to the downtown area of both towns.

There are endless beaches

There is truly an endless number of beaches around Los Cabos. If you want to hang out at the resort in Cabo San Lucas, you have the famous and always-bustling Medano Beach. Some areas are ok for swimming, especially the far end closest to the marina.

If you want to walk for hours on the sand, you’ll love the length of Playa Costa Azul in San Jose’s Hotel Zone. Then there’s every beach in between along the tourist corridor.

Some of my personal favorites include:

It’s very easy to navigate without a car

If you head east from San Jose del Cabo, you can explore the beaches of the East Cape like Playa La Ribera, Cabo Pulmo, or Playa Los Frailes.

I genuinely thought Los Cabos would be out of our price range. If you’ve traveled to or lived in other parts of Mexico, especially areas in the central region away from the beaches, it can sometimes come as a shock to visit the areas of Mexico that receive tons of international tourists.

The prices are definitely higher in Los Cabos than say, Guadalajara or Mexico City. They are higher than I’ve seen in Merida or Oaxaca. But they aren’t as expensive as I thought.

Or, what I should say is, you can spend as much or as little as you want in Los Cabos.

You can see from my Cost of Living in Los Cabos video that we paid $600 a month to live in a furnished apartment. All of our bills were included except electricity, which worked out to be about $15 USD per month.

We cook at home most days of the week, so end up paying about $25-35 USD per week roughly for both of us to buy groceries.

The most noticeably expensive thing here, when comparing it to the rest of Mexico, is when you eat and drink out at bars and restaurants. You can find tacos in most places in Mexico for less than 15 Pesos per taco, seafood tacos may cost upwards of 25 Pesos.

But here in Los Cabos, you won’t find many tacos for less than 25-30 Pesos. Seafood tacos cost upwards of 40 Pesos per taco (I’ve paid as much as 80 Pesos per taco). A seafood dish with cooked fish and rice with a side salad can cost anywhere from 300-600 Pesos ($15-30 USD) depending on the restaurant.

The food is incredible

Los Cabos is home to people from all over Mexico. Because so many people have moved here from other parts of Mexico for the job opportunities, it’s like a melting pot here (kind of like Mexico City!)

You’ll find birría from Jalisco, seafood dishes from Mazatlan, pastor tacos, Puebla-style tacos de Árabe, world-class carne asada, and so much more. In addition to the traditional dishes, there is an amazing play of fusion cuisines here, even simply mixing Mexican classics with one another as well as with other cultures (sashimi-style ceviche is a good example!).

We have tried tons of different restaurants around San Jose del Cabo and Cabo San Lucas away from the hotel zones and have been so surprised by the quality and affordability (when compared to the US).

You can check out my food guide to San Jose del Cabo here and my restaurant guide to Cabo San Lucas here.

San Jose del Cabo and Cabo San Lucas are so walkable when you are in the downtown areas of each. You can walk across either of the towns without any problems in 15-20 minutes. Both are within walking distance of the beach.

But best of all is the bus network here and the fact that Uber exists to take you wherever you want to go that the bus doesn’t. There are also taxis, but they are far more expensive than either of the other two options.

If you want to get to the beaches along the tourist corridor from either San Jose or Cabo, you can take the Ruta del Desierto bus. It’s a purple and yellow bus that runs all day, with another bus passing roughly every 10 minutes. This bus also goes to and from the airport making it the most affordable option to get into and out of the airport.

The Ruta del Desierto is how we got to all of the beaches along the tourist corridor (it’s only 13 Pesos to get from downtown San Jose to Palmilla!). It’s also the cheapest option for going between Cabo and San Jose costing only 38 Pesos per person (just under $2 USD).

But with a car, you can see even more

That being said, we still loved grabbing a rental car from Cactus Rent a Car on weekends to get out to places like Cabo Pulmo or to head north to Los Barriles.

There are so many small towns around Los Cabos and the rest of Baja California Sur that are best explored by your own vehicle since buses just don’t stop in these places or if they do, it’s only every few hours once or twice a day.

It wasn’t until we rented a car and started driving that I realized how truly magical this region of Mexico really is. When you have your own wheels, you can explore all of the hiking trails, drive through the mountain passes, stop at beaches that you will have all to yourself.

With a car, you can discover just how wild and wonderful Baja California Sur really is.

There’s something about Los Cabos that just draws you in. I think it’s because most people have moved here to have a better life so their joy and happiness is exuded in their interactions with others. I think it’s because most people in Los Cabos have moved here from somewhere else, so they are always open to meeting new people.

I think it’s because the quality of life is so much higher here than in other cities. Maybe I’m just more receptive to it now because of how isolated I was last year in Mexico City. Maybe I’m noticing it more than I have in the past because I’m ready to find somewhere that feels like home.

Maybe is none of these things.

All I know is that there is a warmth that you feel from the people here that I haven’t seen or felt in a long time and I enjoyed so much and that helped me fall in love with this magical place even more.