There are so many fantastic things to do in Monterrey. It’s a city for foodies, art lovers, and people who want to get out into mother nature.

It’s a city that really surprised me. It certainly doesn’t have the best reputation due to a torrid past, but on my trip in 2019, Monterrey looks like a clean and beautiful city.

If you’re planning a trip to this northern Mexican city, I promise you’ll find plenty of amazing things to do in Monterrey to keep you busy for at least a long weekend, if not more!

The majority of bars, restaurants, hotels, and things to do in Monterrey are around the Centro neighborhood. Look for hotels near the Macroplaza or Barrio Antiguo.

These are my top picks for the best hotels in Monterrey. 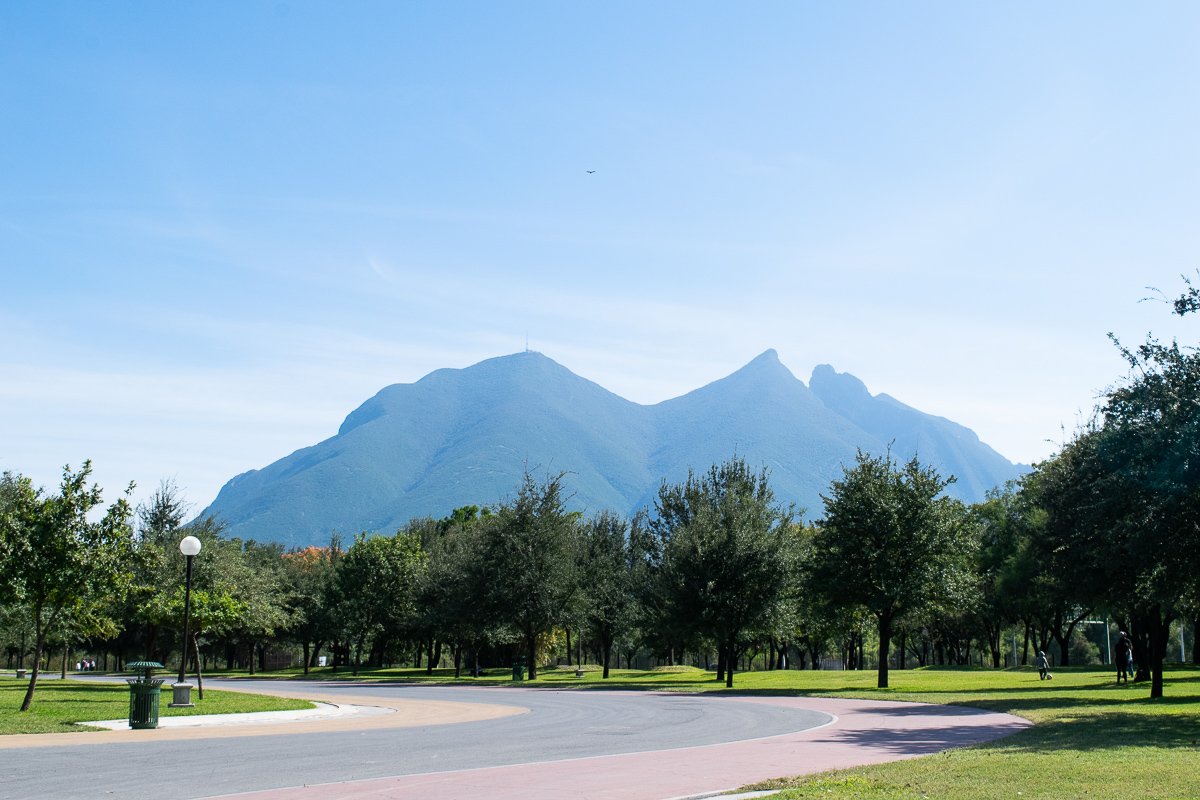 The beautiful mountains no matter where you look in Monterrey!

I tend to prefer Airbnb in cities around Mexico simply because it’s usually better value for money than a hotel. This proved to be true in Monterrey when I booked this place on Airbnb.

It’s located just on the edge of Barrio Antiguo. It was five minutes walk from the Santa Lucia Riverwalk. It was clean and quiet and the bed was one of the most comfortable beds I’ve ever slept in.

I loved the location because it was about as close as you could get to all the best things to do in Monterrey. Besides being close to the riverwalk, we could walk everywhere else like Parque Fundidora and the Macroplaza.

It was also easy to get to by car. While there was some on-street parking, we ended up using Uber while we were there which was affordable and convenient.

Its a complete apartment with a living room, bedroom, kitchen, and dining room and it costs $47 per night. Book a stay here.

If you’ve never used Airbnb before, sign up with this link to receive up to $35 off of your first booking. 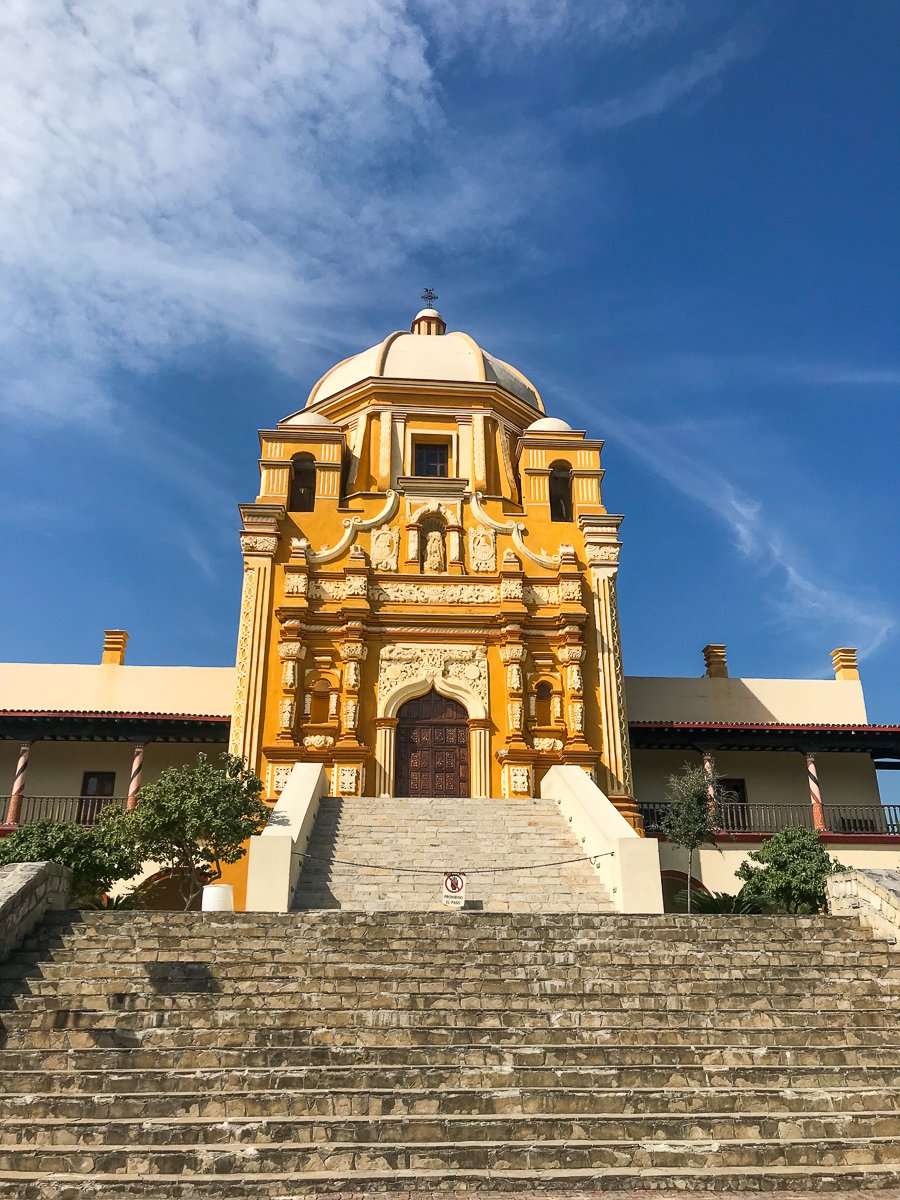 Palacio del Obispado, one of the many fun things to do in Monterrey Mexico!

There are a few budget hostels in the Barrio Antiguo neighborhood worth checking out if you are backpacking Mexico or simply want to stay for cheap.

The Best Things to do in Monterrey

There are so many fun things to do in Monterrey. The best thing, in my opinion, is to wander the different neighborhoods and enjoy the parks.

The weather in Monterrey is mostly warm, so be sure to bring sunscreen, a hat, and sunglasses if you are going to head out exploring. 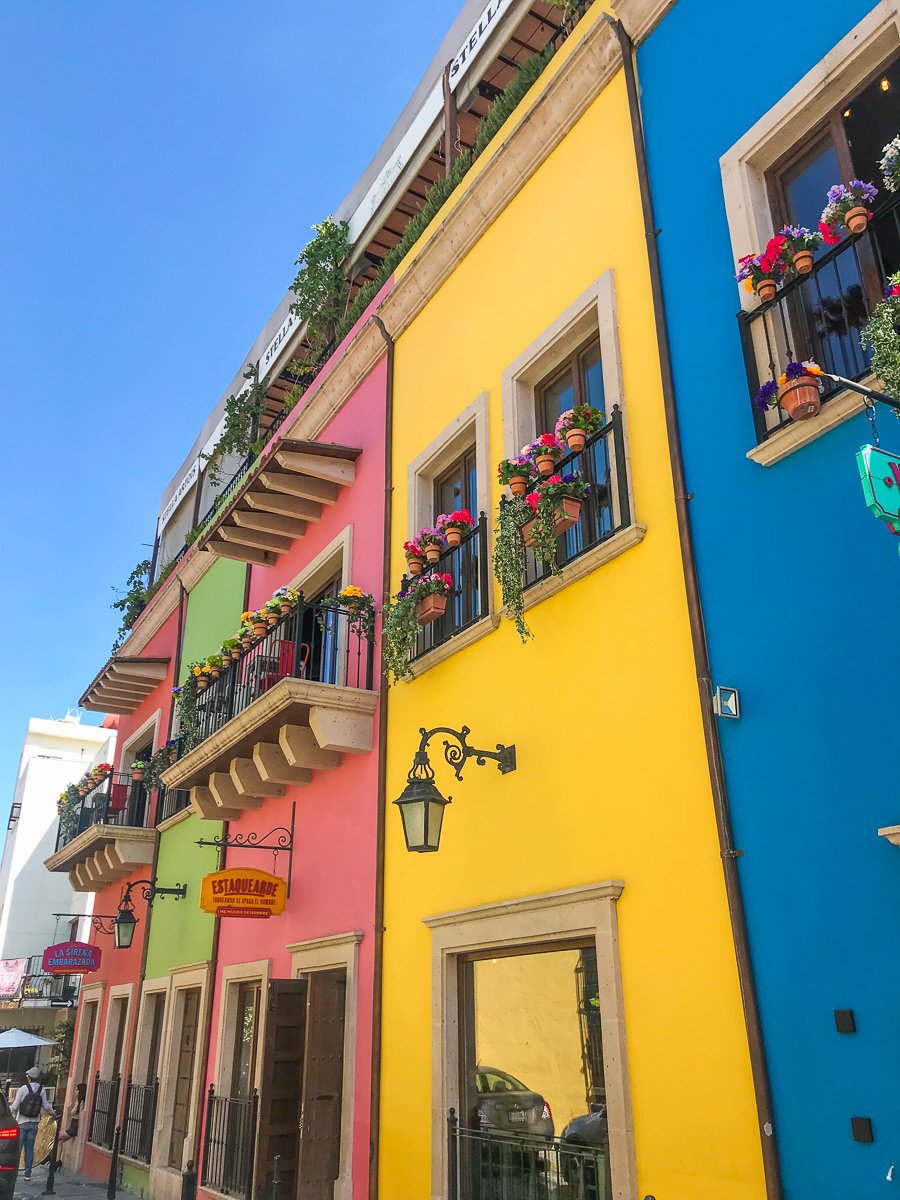 The colorful buildings in Barrio Antiguo

This is the most colorful neighborhood in Monterrey. While it used to be considered an undesirable place not so long ago, it has completely turned itself around.

It’s now home to some seriously great bars, restaurants, and cafes that are well worth your time.

On Sundays, there is an art and antique market. The streets are lined with vendors and every spare bit of space (of which there isn’t much in this neighborhood) is covered with unique souvenirs.

My favorite part of the neighborhood is on the corner of Calle de Morelos and Francisco Javier Mina. This is also where you’ll find the majority of the art fair on Sundays.

Head into Libros Cafe y Detalles for a really good coffee. After dark, don’t miss the craft beers at Almacen 42. They have 42 different taps with Mexican craft beer on rotation. 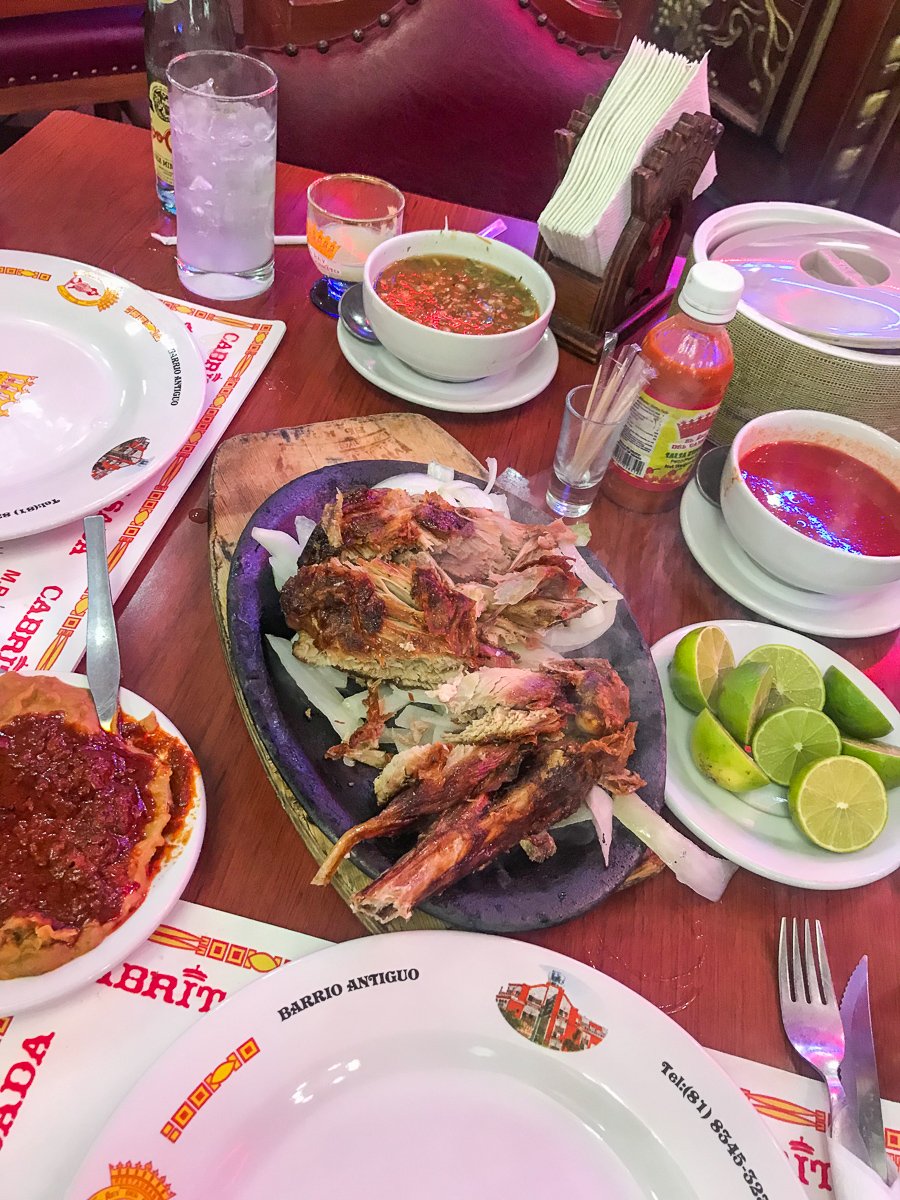 We ordered a big plate of the leg and shared it – it was more than enough food. It comes with tortillas, salsas, chips on the side and lots of piping hot onions to put into your tortillas!

Cabrito, or goat, is a serious delicacy of this region of Mexico. If there’s only one local food you eat while you’re here, I highly recommend the cabrito at El Rey de Cabrito.

The goat is roasted over coals and cooked so perfectly. You can order different parts of the animal such as the leg, shoulder, or breast.

If you are bringing friends, you can order half a goat or combine that with a plate of sizzling hot arrachera (flank steak).

3. Take in the views from Mirador del Obispado

The mountains that surround Monterrey are incredibly beautiful and on a clear day, you will definitely want to get yourself up to the Mirador del Obispado to take it all in.

The mirador is located to the west of the city center. You can easily drive here or alternatively, take an Uber to the entrance of the Obispado Museum.

From the museum follow the pedestrian path up the hill. It’s about a 5-10 minute walk depending on how quickly you tackle the steep hill.

At the top, you’re rewarded with seriously incredible 360-degree views of the city below. 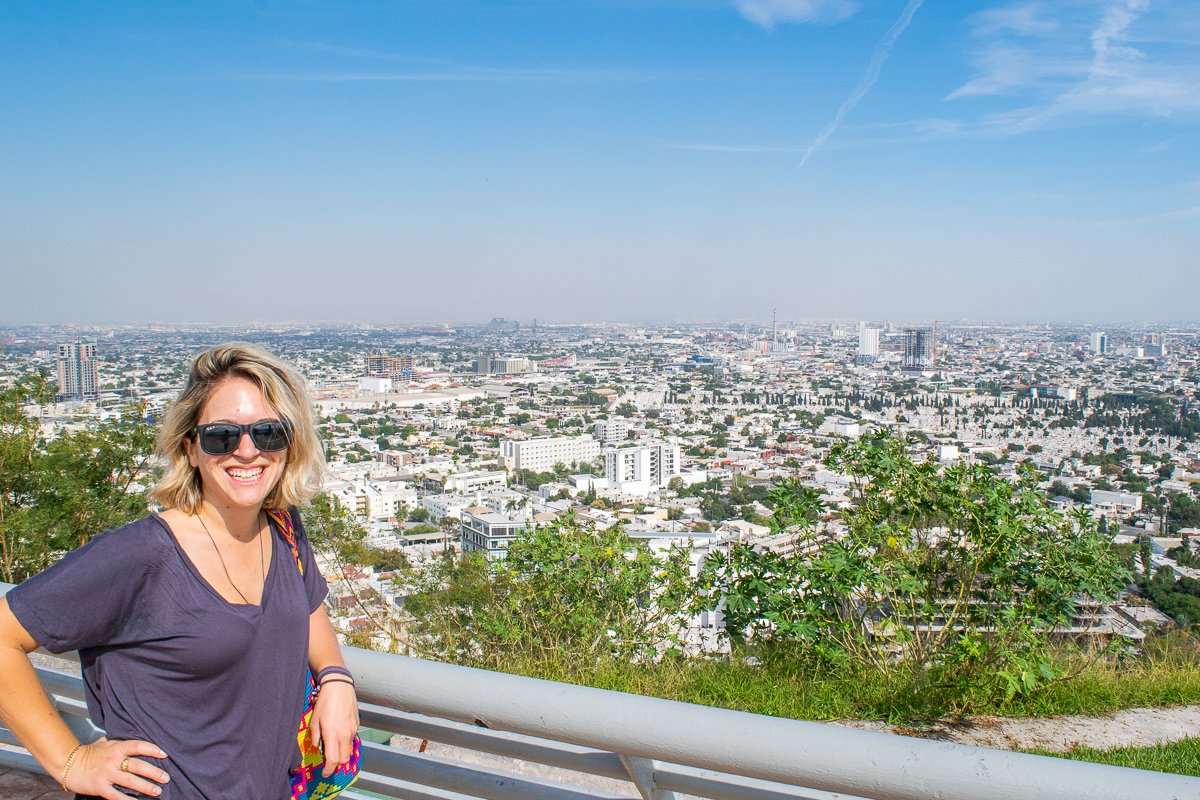 The views out over Monterrey from the Mirador.

4. Enjoy the Sunshine in Parque Fundidor

Parque Fundidora is without a doubt my favorite of all the things to do in Monterrey.

It is an enormous park that starts along the Santa Lucia Riverwalk and leads to different museums, event spaces, a theme park, and grassy areas where you can relax.

There are dozens of paths to follow which head off in all different directions. On the day that I spent walking around the park, I walked almost 10 miles (including a stroll through Barrio Antiguo, too).

Parque Findidora is named after the steel factory that used to be where the park now is. You can still see parts of the factory that have been left in the park sort of like art installations.

If you are more interested in the history of steel here or just want to take an elevator up to the top of one of the structures, head to Museo del Acero Horno 3. 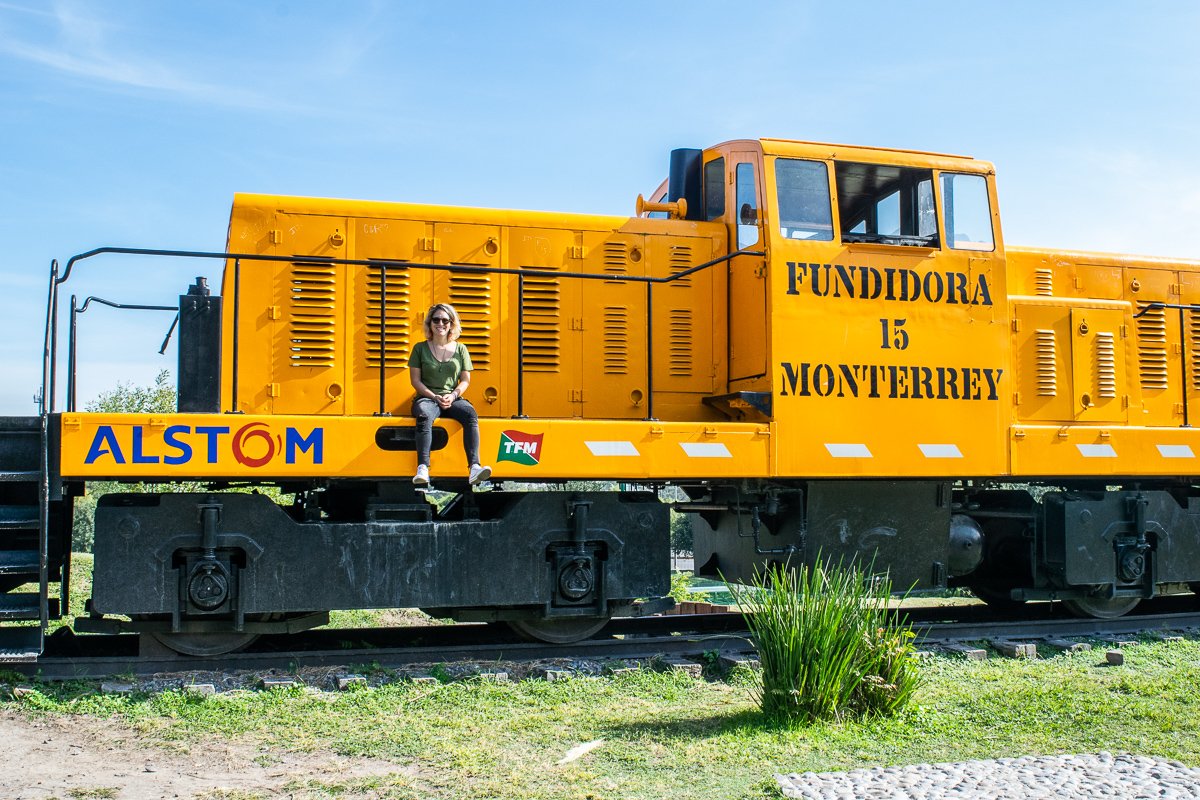 One of the many things left behind from the steelworks that adds to the character of the park.

5. Stroll Along the Santa Lucia Riverwalk

More walking? Be sure to pack comfortable shoes because most of the fun things to do in Monterrey include getting out and walking!

Paseo Santa Lucia is a manmade river with a lovely path on either side to walk along. Its roughly a mile and a half long and you can easily walk from one end to the other in about half an hour.

If you don’t feel like walking, you can also take the Santa Lucia riverboat. The boat costs 70 pesos each way and you can get on or off at either end. 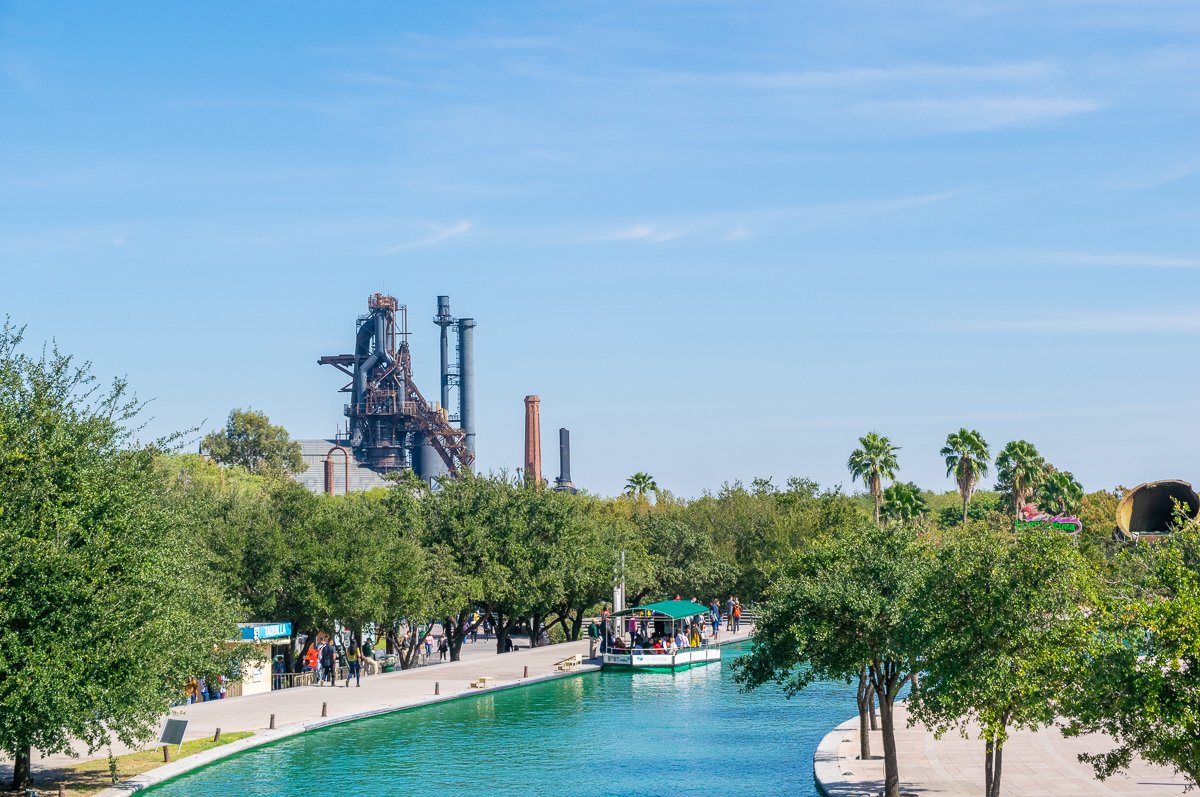 The riverwalk leads you straight into Parque Fundidora.

6. Check out some of the Museums

There are so many wonderful museums in Monterrey worth visiting.

The Museum of Contemporary Art, MARCO, is one of the best contemporary art museums in the entire country. The different exhibitions are constantly changing, but attempt to show off artists from Mexico or who have some sort of connection to Mexico.

As I mentioned above, Museo del Acero Horno 3 is the place to head if you want to learn more about the steel industry in Monterrey. It’s also worth visiting simply to go up to the top of Horno 3 (in a large elevator).

Two other museums worth checking out for the art and culture factors are the Museum of Mexican History and Museo del Noreste. Both are along Paseo Santa Lucia. 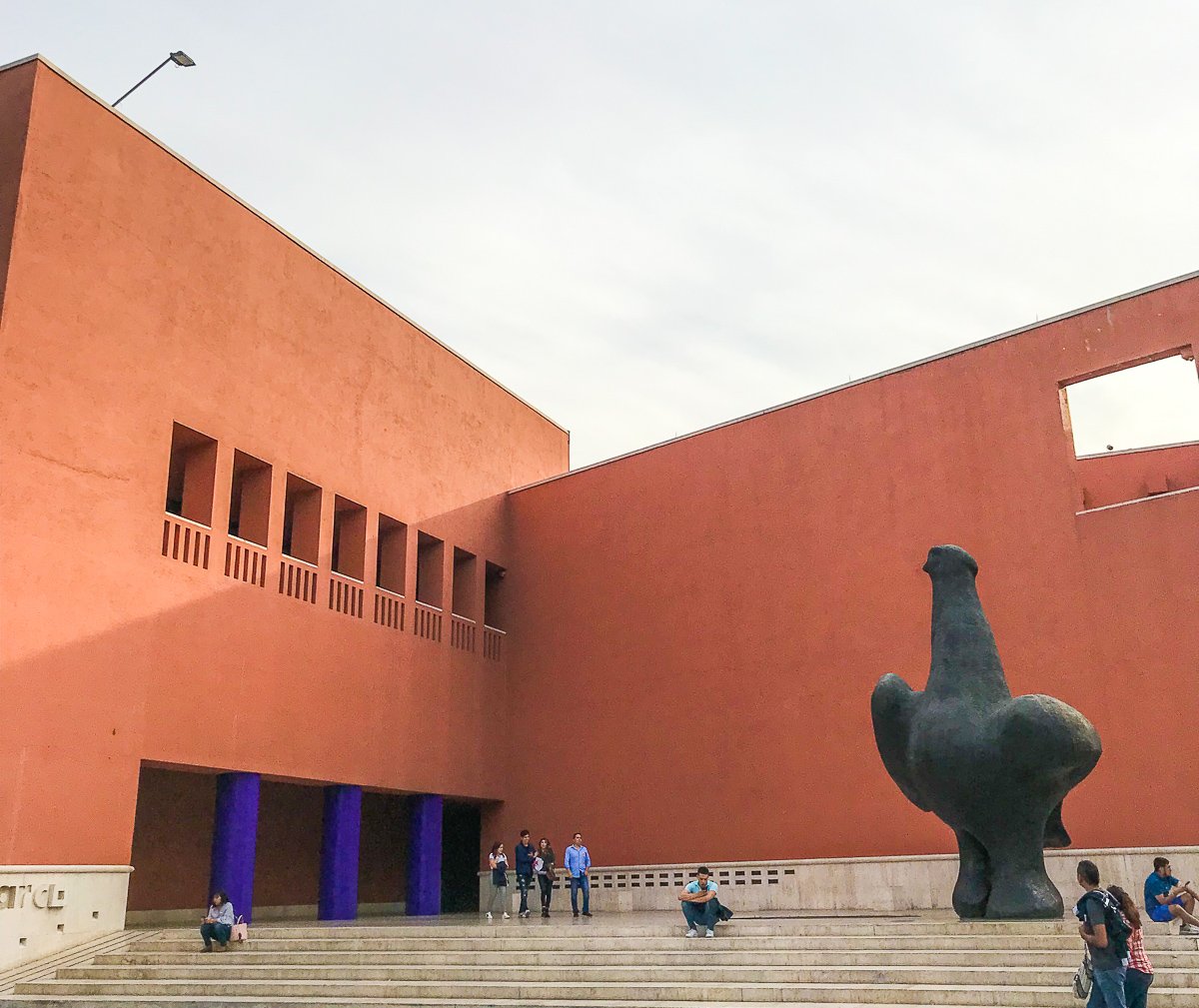 The outside of the contemporary art museum, which is located just off of the Macroplaza. Well worth the 90 Peso entry fee!

Mexican soccer games are so much fun.

The Rayados stadium is quite new and now lauded as one of the best stadiums in the country. It’s located just to the southeast of the city center while the Tigres stadium is located at the UANL campus north of the city.

Like most soccer games in Mexico, you can buy tickets on the door unless it’s a big game (like Tigres Vs. Monterrey). In these cases, you may want to consider pre-booking on Ticketmaster.

8. People Watch in the Macroplaza

The Macroplaza is a huge greenspace smack-dab in the middle of the city. It’s almost 100 acres of green space where you can sit and relax, get a massage, people watch, or go for a walk or jog.

It’s the gathering place of the city with tons of different things happening throughout the week. On weekends, there are vendors selling bracelets and other crafts. 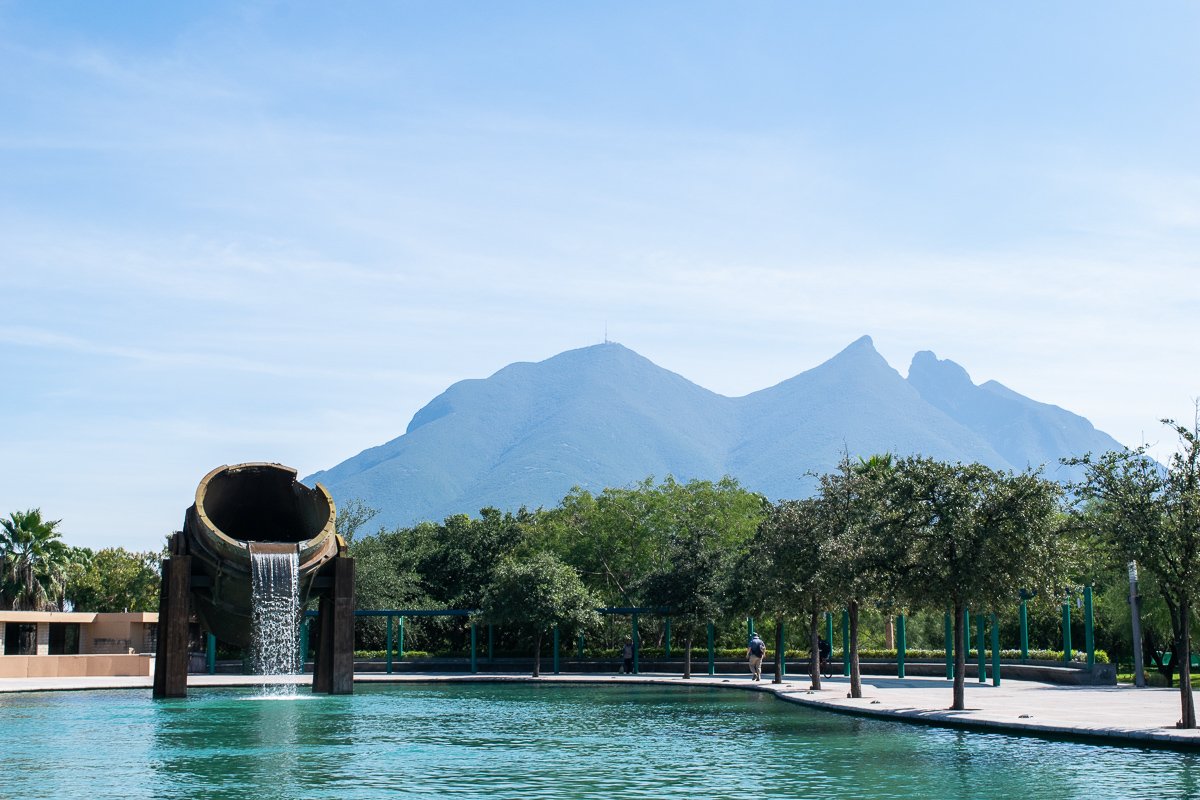 Cerro de la Silla can be seen from all over the city so imagine what you can see from the top?

Outdoor lovers have tons of options when it comes to hiking in Monterrey, but this is one of the most accessible mountains to hike.

There are a few different paths you can take. All are steep and all take you up to different parts of the top.

The different trails on Cerro de la Silla, of course, differ in how long it will take to hike. The easiest hike is roughly 3 hours to the top and then about two hours back down.

The best time to hike is between October and April when it is dry and cooler. Some parts of the mountain can become almost impassible during the wet season (June-September).