If you want to experience a few soccer games in Mexico City on your trip or while you’re living in Mexico City, but aren’t sure how to see one of the Mexico City soccer teams live, then let me help!

Mexico is a football country and people are very passionate about their teams. You will notice that on game days, even people who are not going to the games will be wearing their team’s t-shirts or jerseys.

Mexico City is lucky enough (or perhaps just large enough?) to have three soccer teams in the top league of Mexico. The teams are Cruz Azul, Club America, and Pumas.

Pumas are the team for UNAM, the largest university in Mexico City and they play at the Olympic Stadium or El Estadio Olímpico Universitario, in the southern area of the city.

As of 2019, both Club America and Cruz Azul play at the same stadium.

Cruz Azul used to have their own stadium, but it was sold off and is currently being turned into a shopping center. The stadium that both teams play at is the national stadium, Estadio Azteca.

This is also in the southern area of the city (actually very very far south!). Be sure to get here early to avoid the traffic that starts about an hour before kick-off. 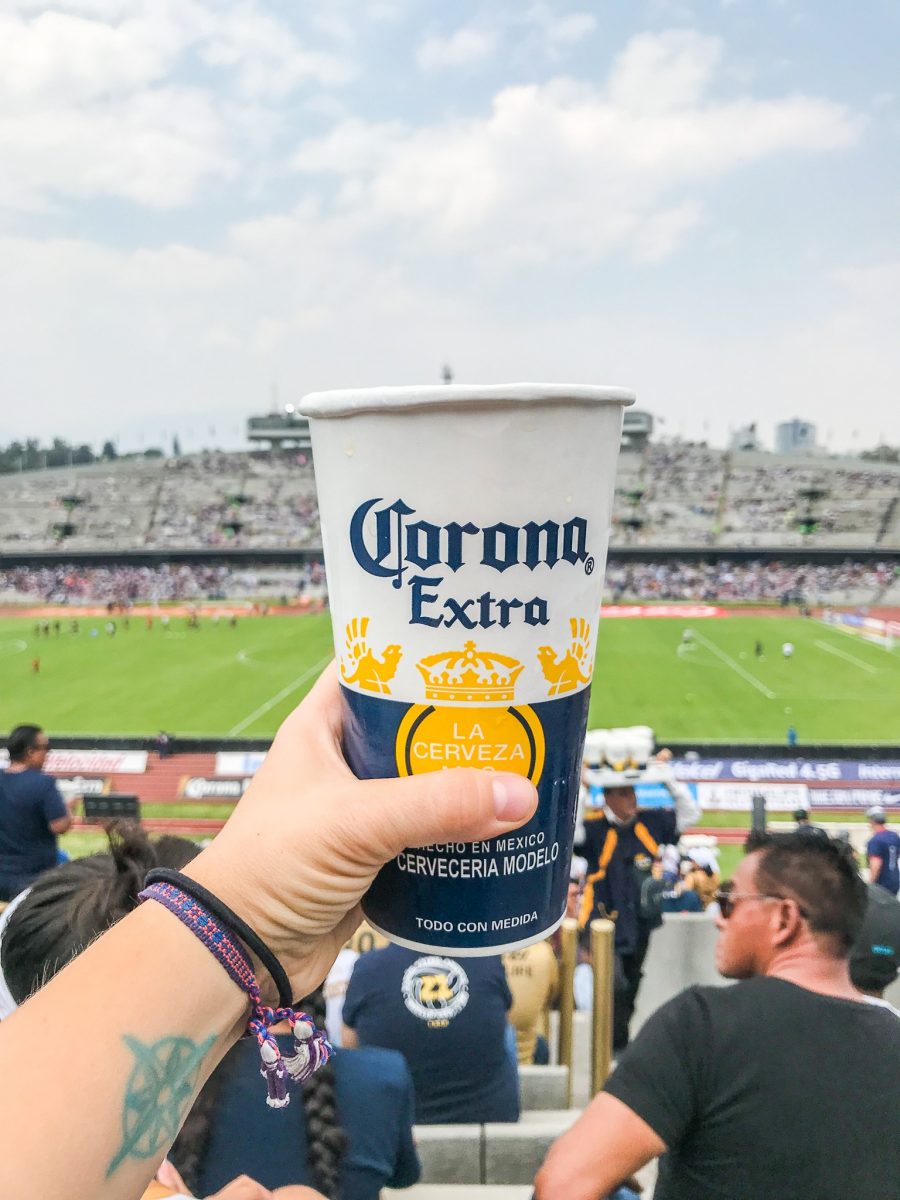 Enjoying a beer at a Pumas game!

If you are going to be in Mexico City for a specific week, I highly recommend simply searching on Google to find out when the games are.

I usually type in: “Cruz Azul fixtures 2019” and Google will show me when the games are. Be sure that you find a game that is going to be played at home and not away. Usually, if Cruz Azul are away for the weekend, then Club America will be at home.

Times and dates change throughout the season for these two teams, however, all Pumas home games are played on Sundays starting at 12pm – it’s simply a tradition that they have never changed.

The season in Mexico runs from September to December and then a new season starts again in January and runs until May. If you are visiting the city during the Christmas or summer holidays, then just note that there will not be any games played. 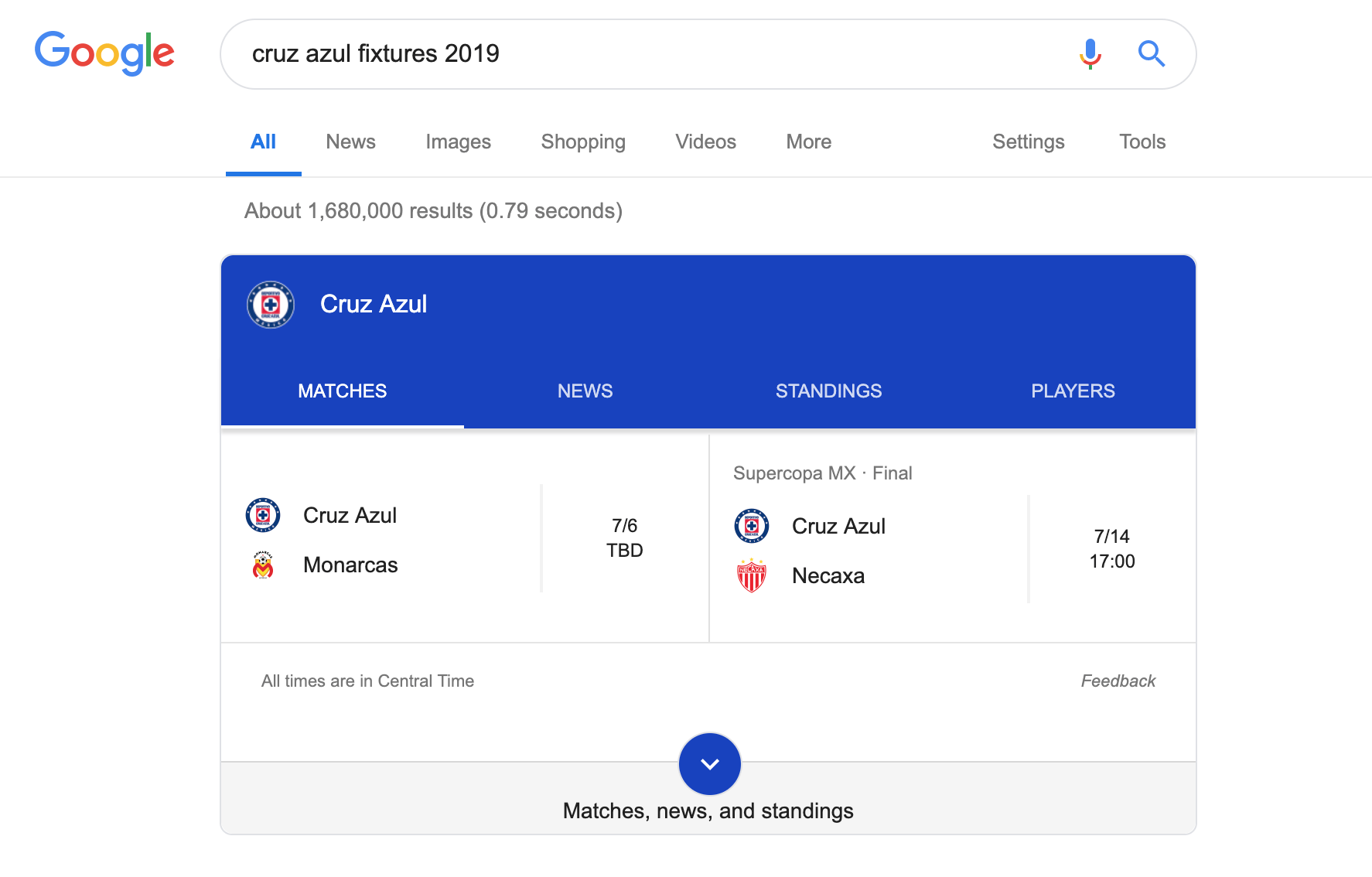 Once you google the team you want to see, you can expand the section by clicking the blue arrow and seeing what dates line up with your trip.

How to Buy Tickets (and what tickets to buy)

Perhaps the most asked questions: how do I buy tickets to a Mexico City soccer game?

As a foreigner with a foreign credit or debit card, the best thing to do is to arrive about an hour or an hour and a half before the game and simply buy your tickets at the door. This is the cheapest and easiest option.

It’s usually what most people do unless it is a rivalry (like Club America versus Chivas).

At the Azteca Stadium, be aware of pickpockets while you wait in line for your tickets.

Simply keep your wallet and phone in your front pockets and your hands in your pockets (or inside a zipped up bag with your hand over the zipper).

If you really want to purchase your tickets beforehand, you can do so only on Ticketmaster. You pay an additional 50-100 pesos per ticket and then you need to get them printed at one of the available locations (usually the Liverpool department store or La Commercial supermarkets).

If you are going to the Estadio Azteca to watch either Cruz Azul or Club America, there are a few options to choose from.

For a fancy experience, get tickets to the Coca Cola Lounge.

These tickets usually cost roughly 700 pesos (about $35USD) and include unlimited food and drink in a closed off area. It usually ends up being cheaper in the long run because beers inside the stadium cost about 80 Pesos ($4 each).

Alternatively, you can get regular admissions tickets for between 200 and 300 Pesos depending on the game.

This is where most of the atmosphere will be if you want to sing songs and sway with the crowd. Your ticket has an assigned seat on it and you usually have to stay in that seat, especially if it is busy.

If you plan to go to Pumas, I highly recommend getting the cheap tickets which usually cost about 300 Pesos ($15 USD).

These seats are general admission and there are no seat numbers.

You just head inside the section and find a place to sit. Be sure to bring a hat if it’s a little bit sunny or warm out because there is no cover over the seats (so not great if it’s raining, either). Get in early so you can pick the best seat and then enjoy the atmosphere! 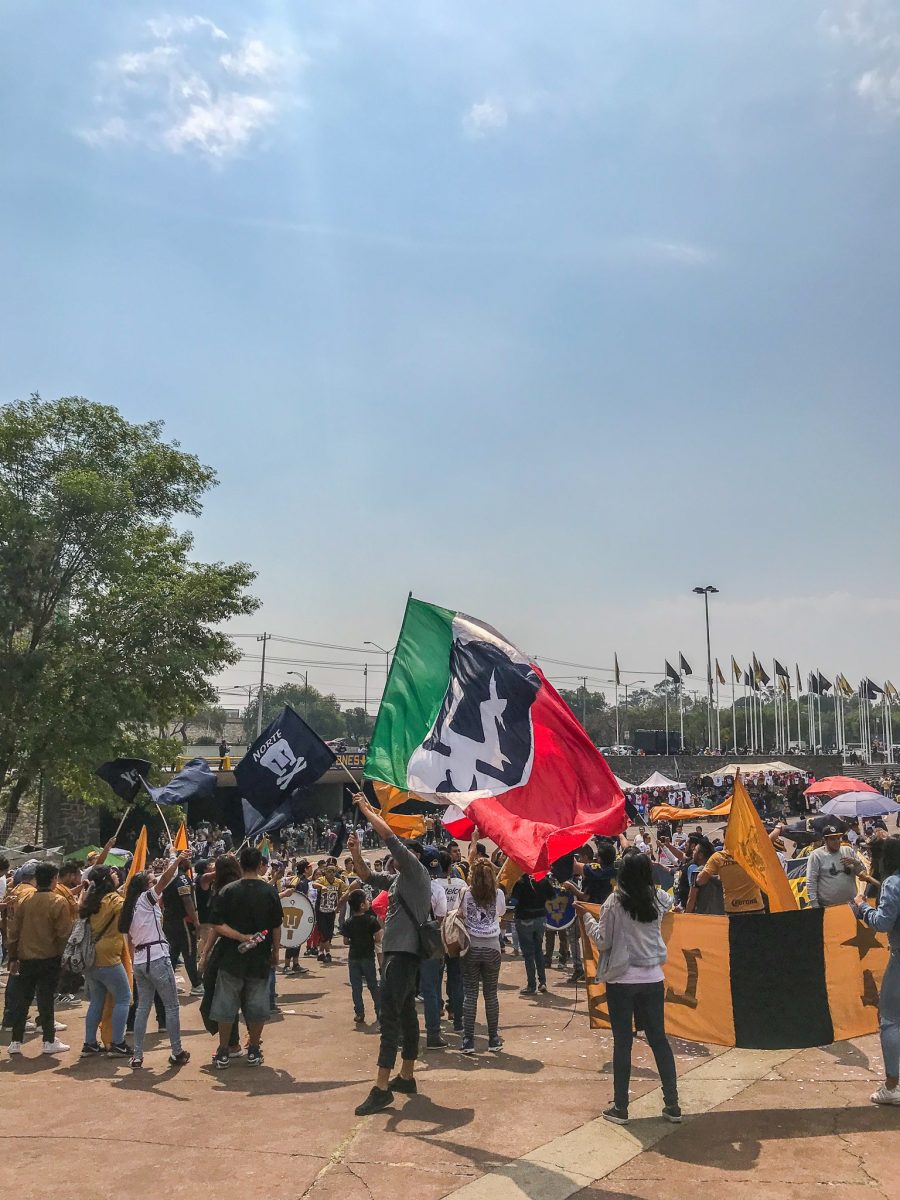 The atmosphere at the Pumas vs Chivas game!

How to Get to El Estadio Olímpico Universitario

It’s quite easy to get to El Estadio Olímpico Universitario from the city center.

If you want to take public transportation, you can take the metro to Coplico (it’s the closest station). From there walk across the park and towards the stadium. You can also take the Metrobus down the Insurgentes and get off at the stop: Metrobus Ciudad Universitaria.

I recommend leaving for the stadium 2 hours before the start of the game. This gives you about half an hour-45 minutes to get there then you can get in the line to get your tickets and still have time for some tacos outside the stadium.

You can read all about How to Use Uber in Mexico City here.

How to Get to Estadio Azteca

To get to Estadio Azteca by public transport, you take the blue line on the metro all the way to Tasqueña station.

From inside the station, follow signs for Tren Ligero. Take the tren ligero (3 pesos) to the Estadio Azteca station. When you come out the stadium is basically right in front of you.

The alternative, just like with the Olympic stadium, is to take an Uber.

This could take up to an hour or slightly more if you leave it too long. I usually leave my house 3 hours before the game starts if I’m going to Cruz Azul and I need to buy tickets.

This gives me just over an hour to get to the stadium, then I wait in line for tickets which can take about 20 minutes. That gives me plenty of time to have some food outside the stadium and then go in to get my seat.

If you get an Uber, they cannot bring you into the parking lot. You’ll get dropped off outside the stadium and it’s about a 5-minute walk from where you get dropped off to the ticket counter. 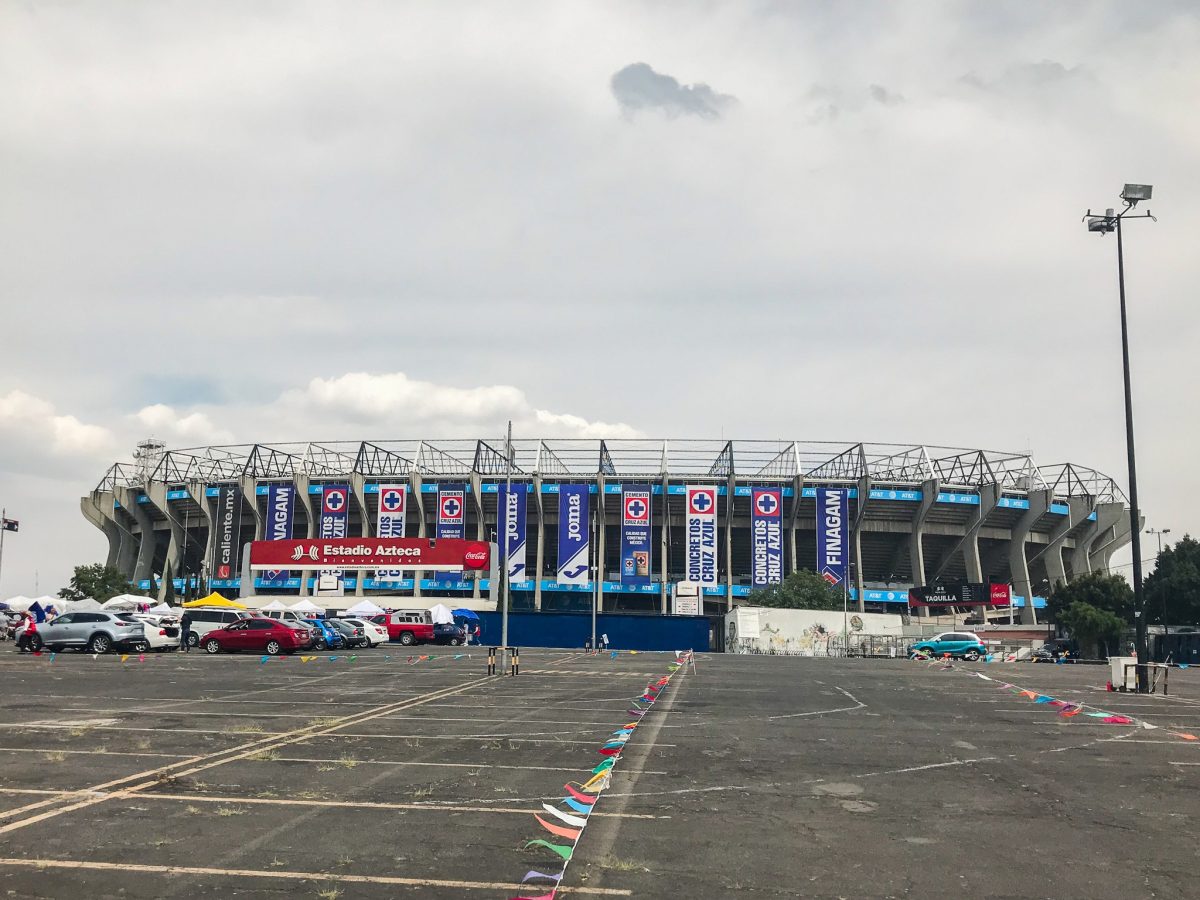 The stadiums are all very strict about what you can and cannot bring.

You can’t bring any liquids including water or sodas and certainly not beer. You cannot bring any food and your bags are thoroughly checked, so don’t try to “hide” things in there either.

Women can have small handbags, but most stadiums do not allow backpacks or larger handbags.

You cannot wear a belt. Men and woman are all patted down as you enter the stadium and you will be asked to “check” them with the paqueterias (bag check areas).

You can and should wear a hat.

My boyfriend and I usually wear baseball-style hats because they fold up easily and there’s no metal on them.

You can also bring sunscreen which I use a lot when we go to games and there’s no sun cover.

You can also bring your phone, but I saw a lot of signs that say you cannot bring a camera – especially a larger DSLR style one. 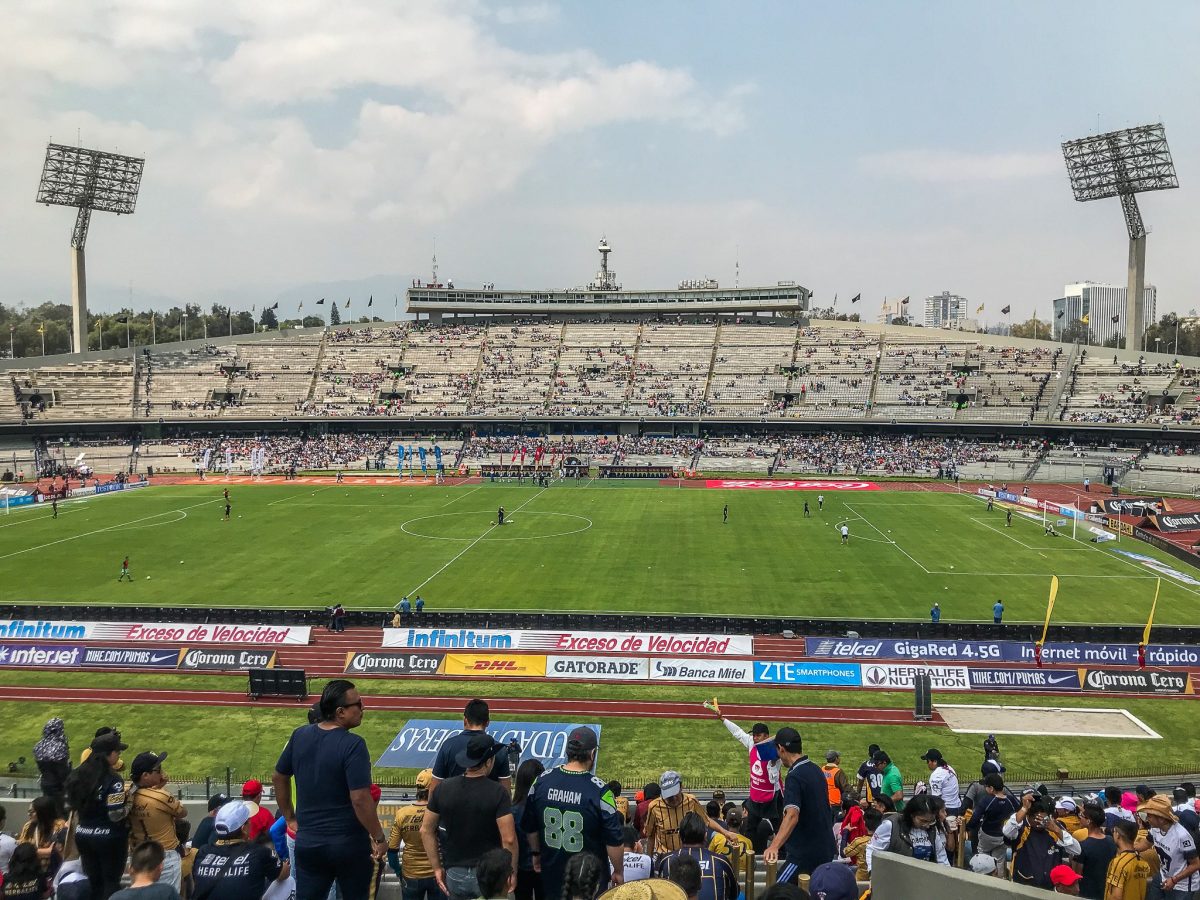 Inside the Olympic Stadium at a Pumas game before it filled up completely!

Like I mentioned above, people love their football teams here in Mexico. If people are willing to spend the money to go to the games, then they are usually pretty big fans.

There’s plenty of drinking going on, but in my experience, it’s all very jovial.

Stadiums here in Mexico, just like in many parts of South America and Europe, tend to separate home and away fans.

The away fans are let into a separate entrance and then guarded by security all along the seating area.

Sometimes away fans aren’t even allowed to be served beer inside the stadium. This is usually the case during big rivalries.

If you want some souvenirs, the stalls outside the stadiums are the best places to grab a hat, scarf, or t-shirt with the home team’s logo on them. It’s cash only.

If you remain inside the home fan section and mind your own business, then you will have a great time.

In fact, most people in the stadium think it’s so great that visitors to Mexico City want to see their team. Every time I’ve been to a soccer game in Mexico City, I’ve met lovely and kind people and I’ve had an absolutely great time. 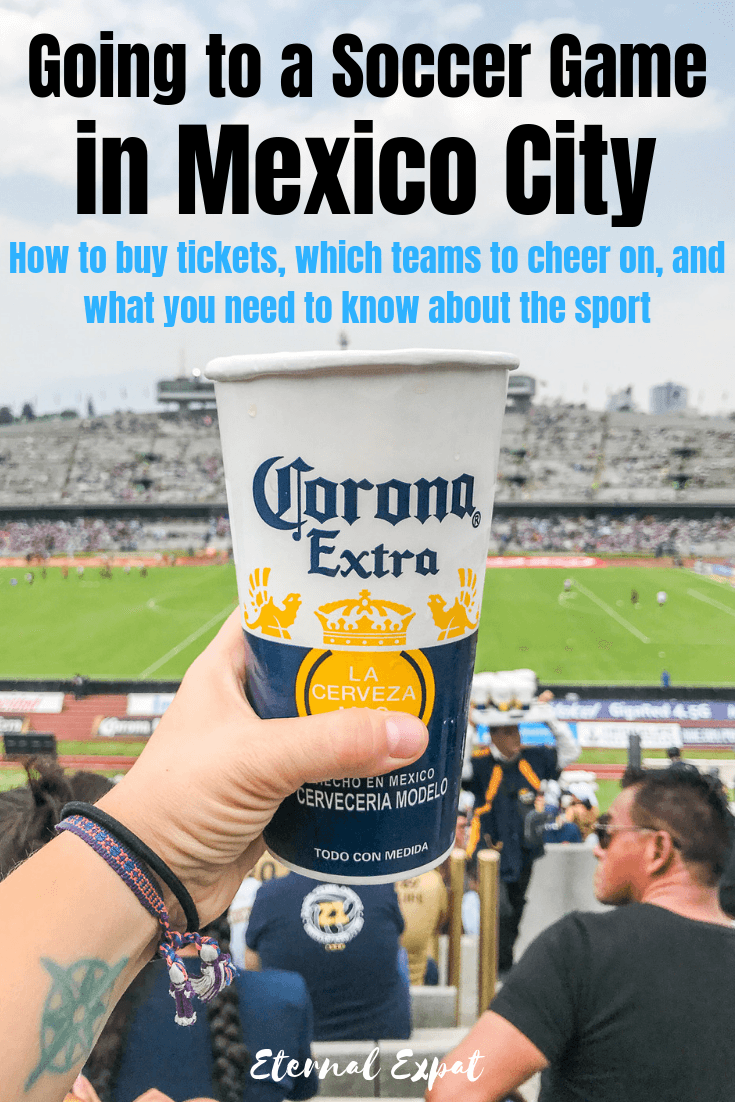