I have been using the HMA VPN for about two months now and I’ve really enjoyed all of the benefits of using their services. I thought I would break down all of the positives and negatives I’ve discovered over the last 8 weeks in a comprehensive HMA VPN review.

How I Use a VPN

I use a VPN mostly as a way to protect myself while using the internet. I try to take a lot of precautions when it comes to protecting my website and all of the activities around keeping my website data safe. For me, the VPN allows me to protect all of my data and encrypts passwords and usernames and anything else that I use in connection to this website.

I also use the VPN to check out flight prices. On the odd occasion, I have actually noticed that if I switch my VPN on to a different location than where I am, then I will be able to save about $10-20 USD on a flight price.

The third way that I use the VPN was really an added bonus. I use it to watch some television shows that are only accessible inside the US or the UK. I use it to stream some television that otherwise wouldn’t work here in Mexico or simply to protect my location and stream things without any problems.

One Subscription for Everything

With my HMA VPN subscription, I am able to have the VPN on my phone and on my laptop. If I had a desktop or a tablet, I could have it there too. In fact, you can be using your VPN in up to five places at once, so there are no extra or hidden costs if you want to protect yourself on all of your devices.

This is one of the best safety features of the HMA app. I have it switched on on my phone because I’m constantly using public WiFi or insecure data networks around Mexico. It means that while I’m connected to the VPN and using apps like my banking app or credit card apps, and the VPN connection goes for some reason, so too does the internet.

It’s HMA’s way of keeping your data safe so if they can no longer encrypt your data, they pull the plug on your internet. Once the connection is secure again, it will reconnect to everything and you can go on using the internet as normal.

While I’m not exactly using sensitive data in my day-to-day life, I do like to know that when I’m using apps that share personal information, that I’m totally protected. 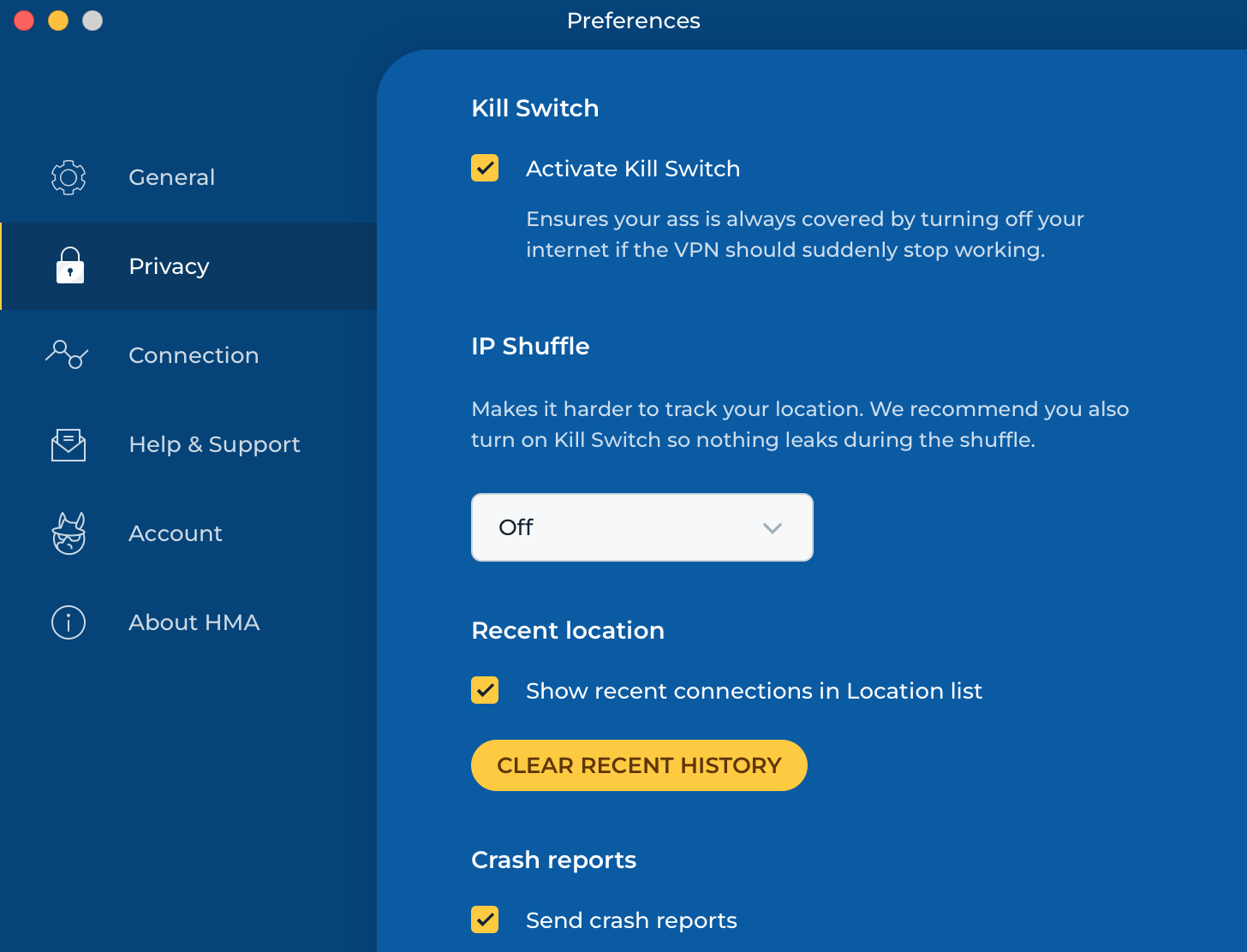 Here in the dashboard you can see that you are able to tick the box that will activate the kill switch in case of a problem with the VPN.

On a lot of VPNs, when you log into the new server and IP address, it means that all of your apps and webpages are running off of that VPN. The cool thing about HMA is that you can actually pick and choose what runs off of the VPN and what stays on your normal IP address connection.

The IP Shuffle is a switch that you can turn on in your HMA dashboard that will automatically change your IP address at regular intervals so you are constantly protecting yourself from any loss. This is a great feature if you are working with very sensitive information or you are using a streaming website and you have used up your allotted time to watch a program. You can find this on the same page as the kill switch (shown above).

I usually just use the manual shuffle if I have a problem, which is located in your main dashboard. You can see in the image below that all you have to do is click the shuffle button and it will assign you a new IP address. 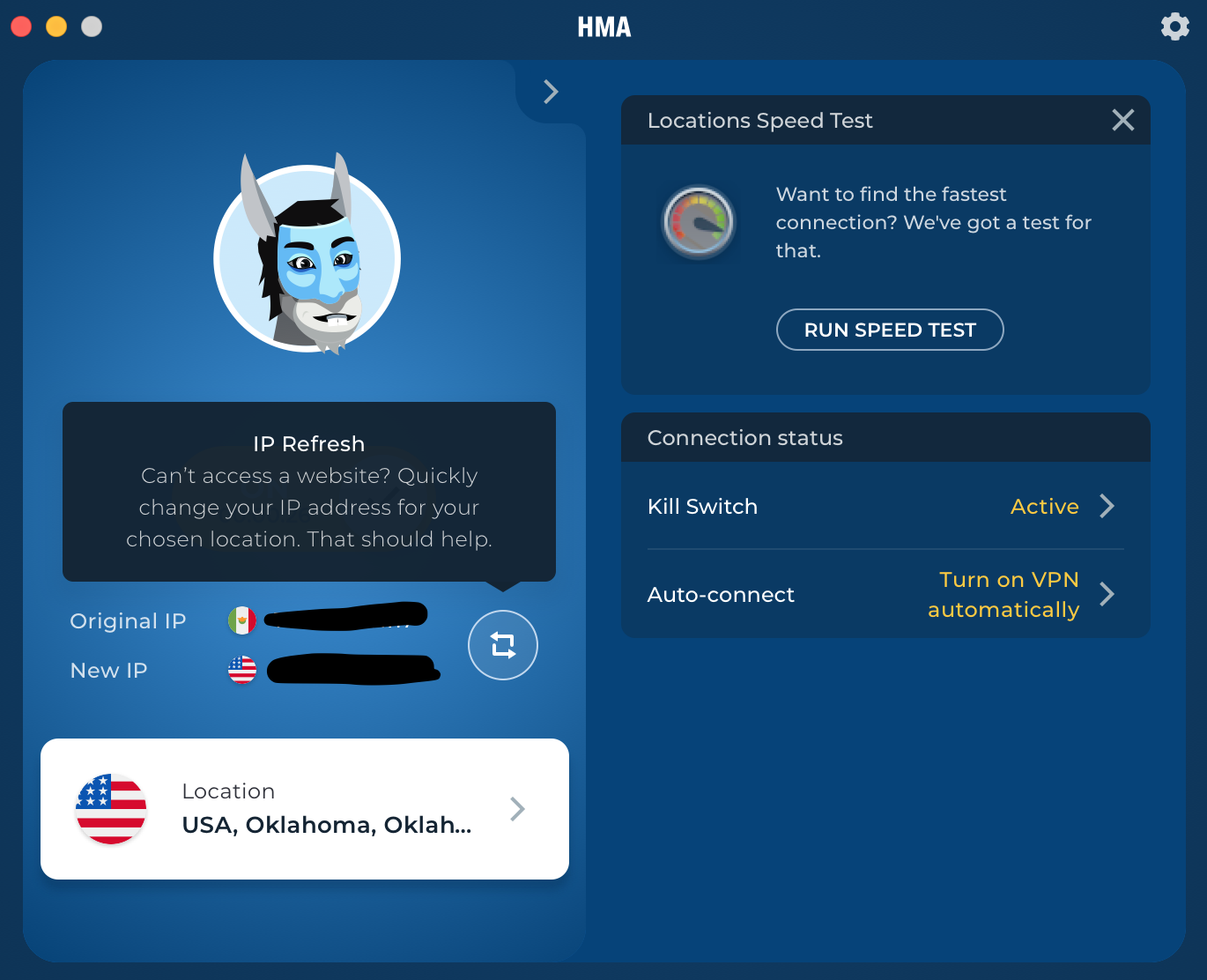 This is your main dashboard if you open the HMA VPN app and here you can see that if you click the refresh button, you can automatically refresh to a new IP address.

HMA have over 290 locations in 190 countries. No matter where you are in the world, you can find a secure and fast connection near where you are. It’s definitely one of the most comprehensive listings of countries and locations that I’ve seen on a VPN that I’ve used and for me living in Mexico, it’s been great to have access to so many different countries.

Using HMA has allowed me to change my digital location to places in the US, Canada, and the UK mostly so that I can watch different television shows that are only available to people in that country. I explain more about that in my article about using a VPN in Mexico.

The level of encryption on the HMA VPN is some seriously powerful stuff. While the codes and numbers really mean nothing to me, the fact that the encryption used by HMA meets the highest standards says all I need to know. All of the servers, all of the data, everything that I do while I’m logged into the VPN is encrypted.

One of the things I was worried about with a VPN was that it might slow down my internet. I’m already working at a slight disadvantage because the internet in Mexico, in general, isn’t super speedy, so I didn’t want to slow it down even more. The feature that I love on the HMA VPN is that you can test the five nearest connection locations and see which is fastest. In my case, it’s actually quicker to log into a location in Oklahoma than it is to connect in Mexico City.

I think it’s a really great feature that allows you to constantly be logged into the location that allows for the fastest internet speeds. 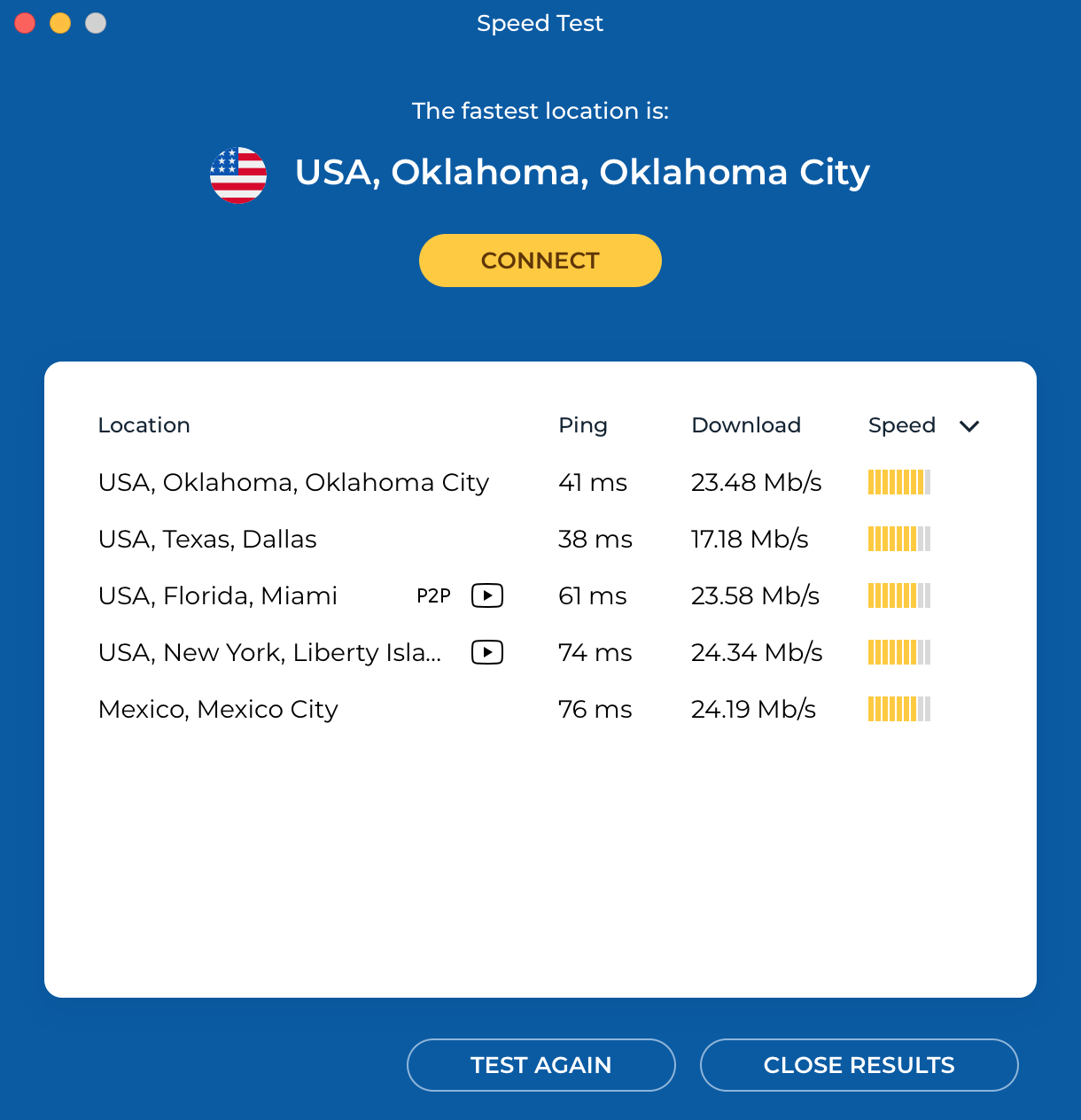 My most recent HMA VPN speed test showing the fastest connections near me.

I am in no way a tech-savvy kinda gal. Whenever something goes wrong with my computer or my website, I immediately head to the Apple Genius bar or call up my developer. The HMA VPN is not some tricky or confusing program. It’s an easy-to-use app that you can download onto your computer or phone and literally start using it right away.

The interface is clean and very clear. I always understand what I’m doing and I have yet to be confused by any of their services. If I’m not sure of something on the app, I usually head to the features page on their website and I always find a very easy to understand explanation of what that new feature is all about.

If you use the code LAURA at checkout on any one-year plan, you’ll save even more. This code will give you 20% off your first year.  You can sign up here or learn more about their VPN services here.

There’s just one con that was kind of a bummer that I discovered while using the HMA VPN. 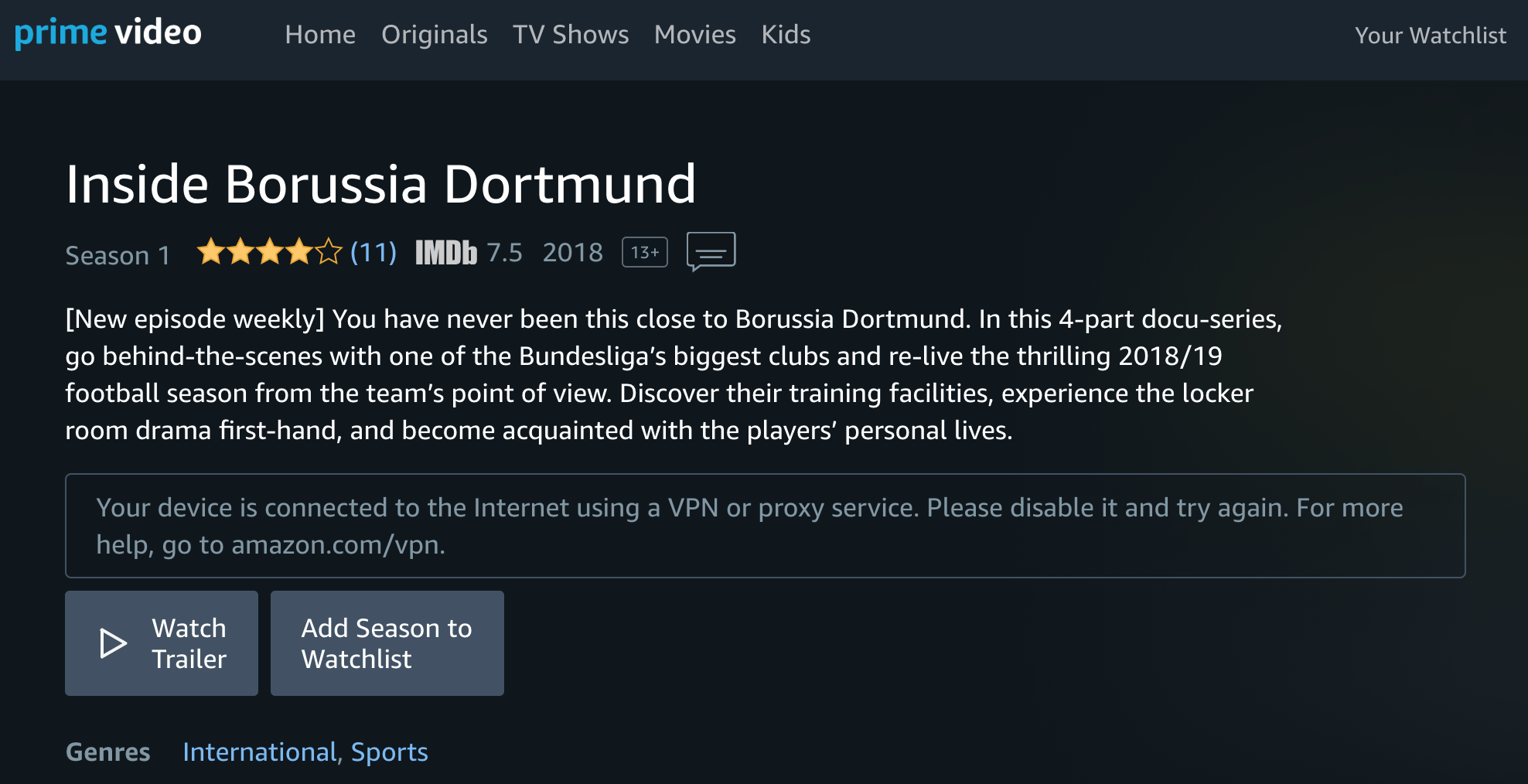 As you can see from this screenshot, Amazon knows that I’m connected to a VPN and will not allow me to continue watching anything unless I disconnect from it.

Doesn’t Work on Every Site

It doesn’t work on everything. That being said, most VPNs don’t work on every website. Huge sites like Amazon have caught onto people trying to access their television shows from abroad and they are able to stop you from viewing them. I suppose I was just a little bit disappointed because I thought I would be able to access shows on these websites that I’m unable to watch while here in Mexico.

That being said, you can still access sites like Netflix, BBC iPlayer, and Bravo TV, so I’ve still been able to use it to watch some of my favorite shows that are otherwise blocked here in Mexico.

Will I Keep Using HMA VPN?

Absolutely. My number one reason for choosing a VPN was to start protecting myself on the internet. I’ve done a fair bit of research around this topic now over the last few months as I’ve been trialing HMA and I seriously believe that for the price they charge, I am not going to get better protection at this value. 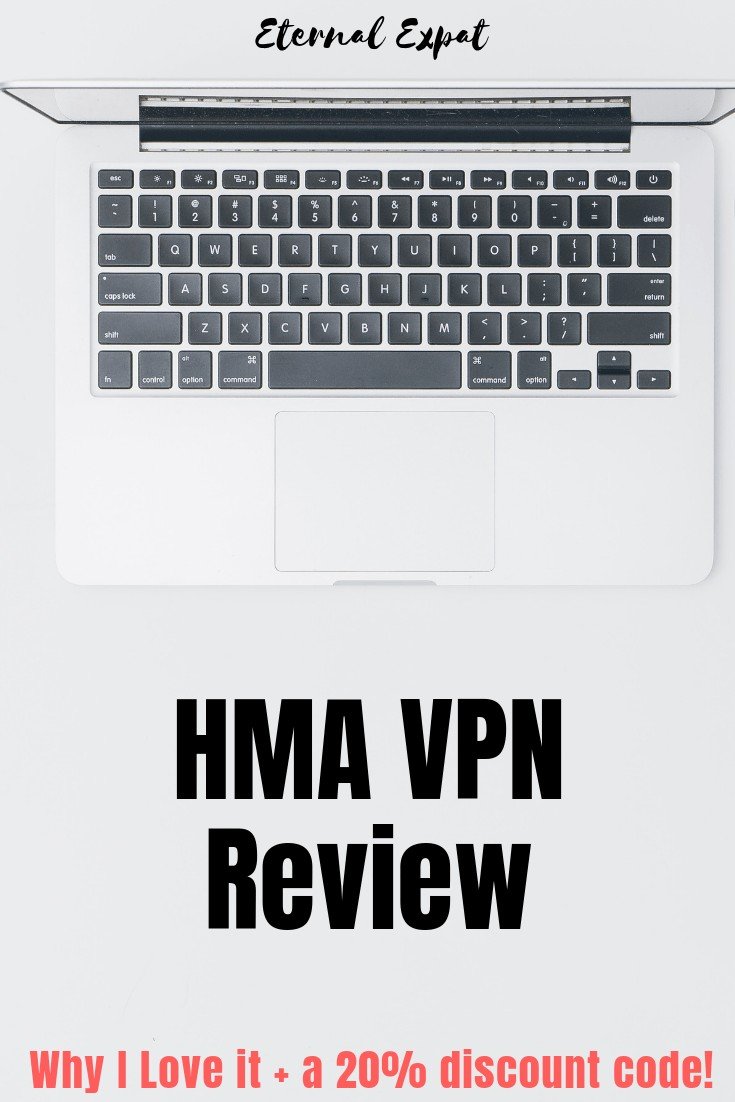 This post is in paid partnership with HMA VPN