There are so many amazing things to do in San Pedro Belize, especially if you love beaches, beers, and golf carts.

I spent time on both Caye Caulker and Ambergris Caye (the island where San Pedro is), and they are both so different.

I loved San Pedro and the whole of Ambergris Caye because overall there were a lot more things to do in San Pedro than there were in Caye Caulker.

If you’re traveling with a family, there’s plenty to do in San Pedro with kids. It’s got the relaxing island vibes while also having plenty of activities to keep you busy during the day.

It also has some of the best beaches I’ve been to in this region of the world, and plenty of them.

The Absolute Best Things to Do in San Pedro Belize

These are some of my favorite things to do on this beautiful Belizian paradise island.

There are so many incredible areas to go snorkeling near San Pedro.

There are several places around the island who will take you snorkeling, but I thought Chuck and Robbie’s was the best. It came highly recommended by everyone we spoke to. After doing two tours with them, I can’t recommend them enough.

You’ll see stunning coral, stingrays, turtles, lots of colorful fish, and even some sharks if you want to explore the nurse shark colony. 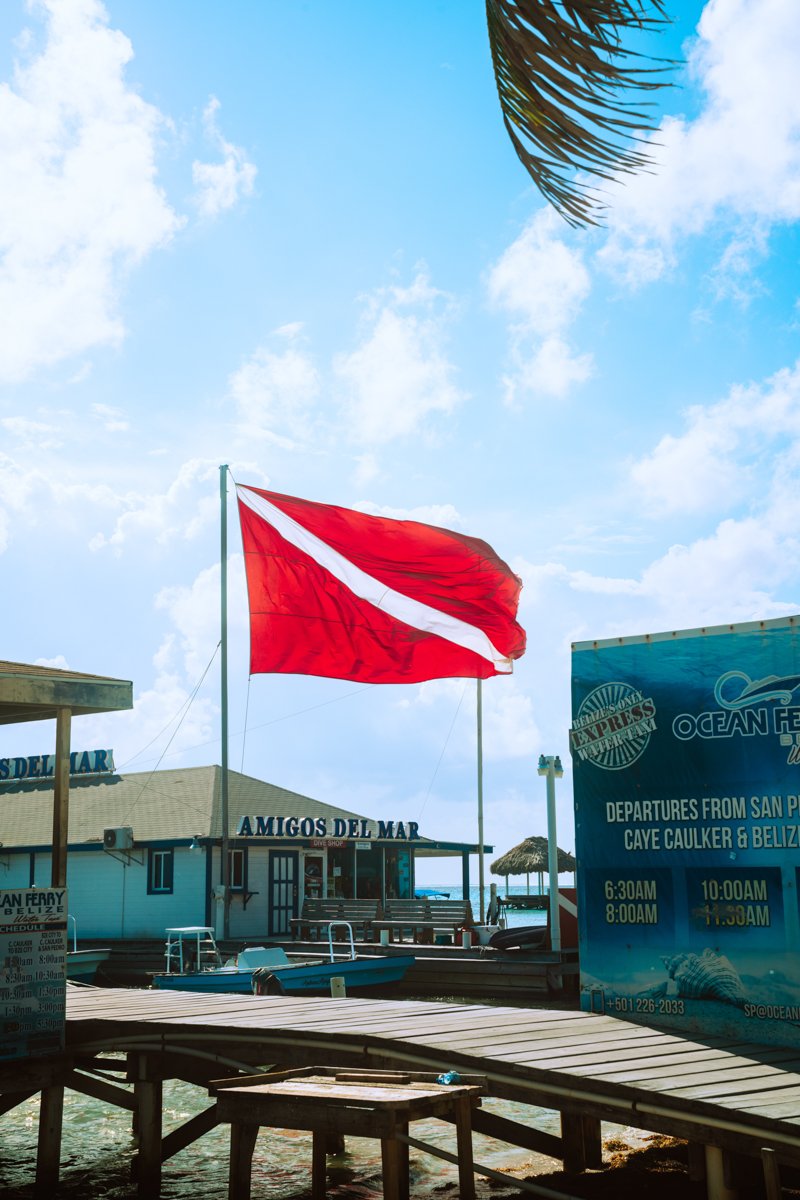 Chuck and Robbie’s is actually a dive shop, but they also run snorkeling tours.

If you want to go deeper out into the Belize Barrier Reef, diving is the best way to see this.

It is over 300 meters wide (almost 1,000 feet) and over 100 meters deep (over 330 feet). Most of the amazing wildlife is around the outer area where the reef is. However, it’s quite a special thing to dive even partway into this incredible sinkhole. 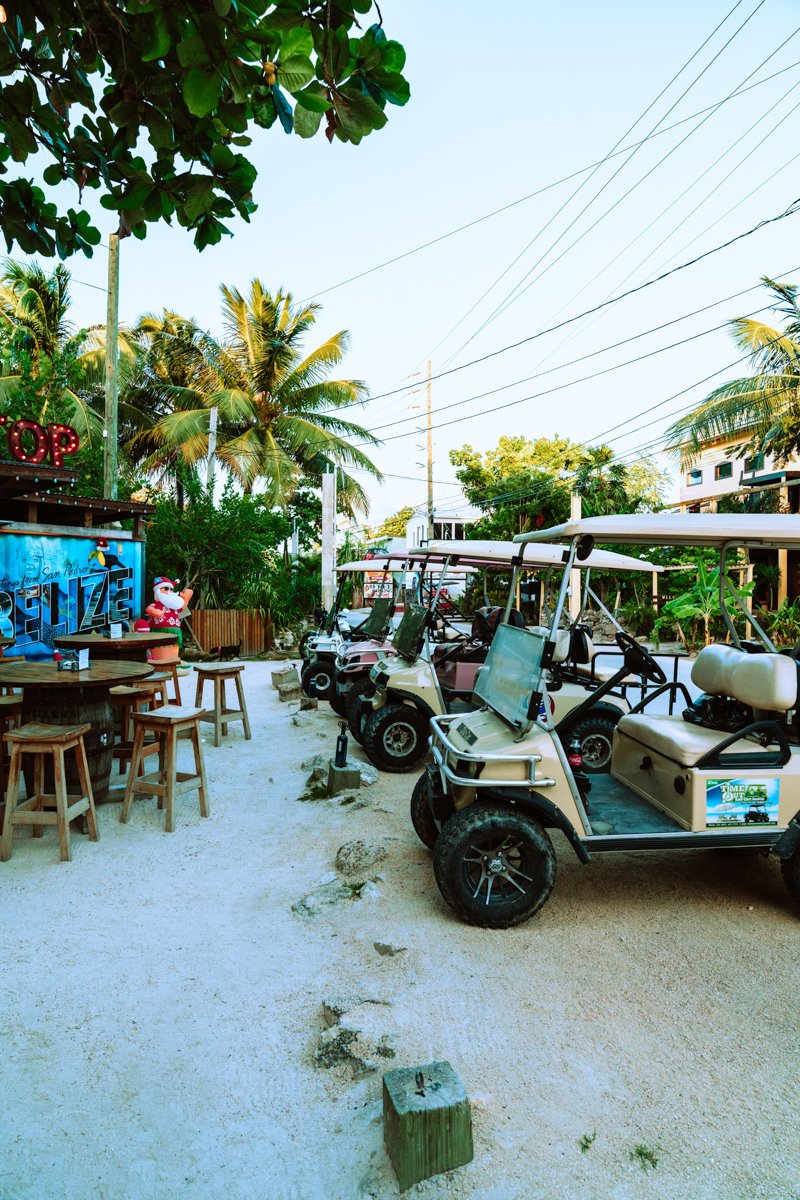 The number one way to get around San Pedro for tourists and locals is by golf cart.

You can rent them from tons of different places around the center of town including at some of the grocery stores. It should cost about $50 USD per day. Pretty much everyone charges the same. If you see someone renting for cheaper, be sure to check they have insurance.

Golf Carts are treated like vehicles on the island, so in order to rent the vehicle needs to have insurance and you need to have a valid license.

If you are from a non-English speaking country and your license is in a different language, you may need to get an international driver’s license.

Once you have a golf cart, you can explore pretty much the entire island. That includes areas to the north and south of San Pedro where many of the most beautiful beaches are. 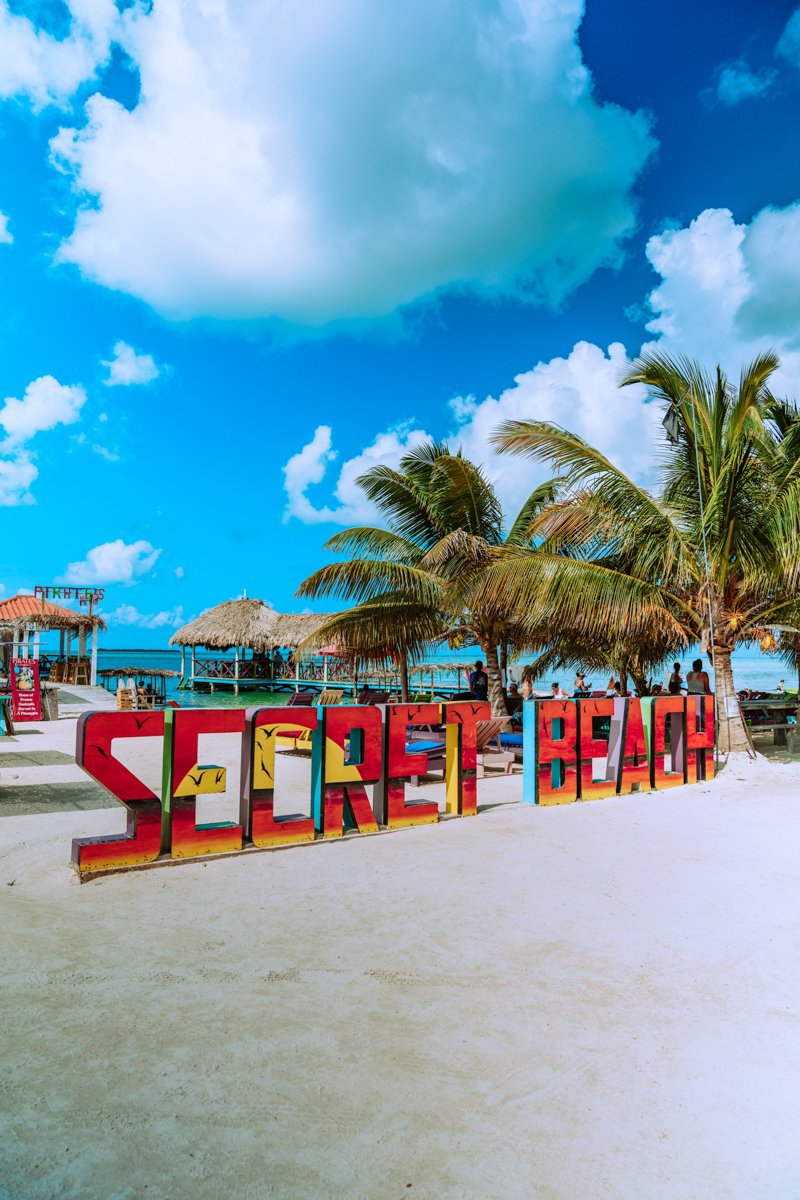 One of those amazing beaches that you can only get to by taxi or by renting a golf cart is Secret Beach.

It’s not really much of a secret and is, in fact, one of the most popular beach spots on the island, it can be a bit of a pain to get to.

The road to Secret Beach is unpaved for much of the way. So, although it’s only a few miles from San Pedro, it takes about an hour each way to get there and back. There are no street lights on the road (as of early 2020). Be sure to get back to the main road before dark.

It’s very easy to find Secret Beach. Simply head north out of San Pedro (there is only one main road in and out of the town).

You’ll cross over a small toll bridge where you should pay for both directions since you will be crossing back over later in the day. It’s about $3 or $4 Belize Dollars for the toll, so be sure to have cash.

After the toll bridge, it will get a bit more rural with fewer shops and restaurants.

Eventually, you will come to a road on your left where you can turn.

There should be a sign for one of the restaurants at Secret Beach. This road will take you all the way to the parking lot where you can park your golf cart and enjoy the beach.

One of the biggest draws to this beach is that it’s one of the few places on the island where you actually get a view of the sunset. Most of the beaches on the island face east, so you don’t get a good sunset view, but Secret Beach faces west.

The trouble is just ensuring that you don’t let it get too dark for your ride back. Golf Carts do have lights, but they’re not particularly bright and the road between the main highway and the beach is absolutely riddled with potholes.

There are very small Maya ruins on Ambergris Caye and these infrequently visited ruins are one of the best things to do in San Pedro Belize in my personal opinion.

It is not well funded because it’s still so small and there is still so much excavating to be done, so sometimes it closes for several months at a time. But it’s usually open during peak season from November to February.

The site is called the Marco Gonzalez Maya Site and is located south of Belize. Head out of the town going south past the airport. It’s only about 30 minutes from there right off the main road. You’ll see it on your right side if you are driving from San Pedro. 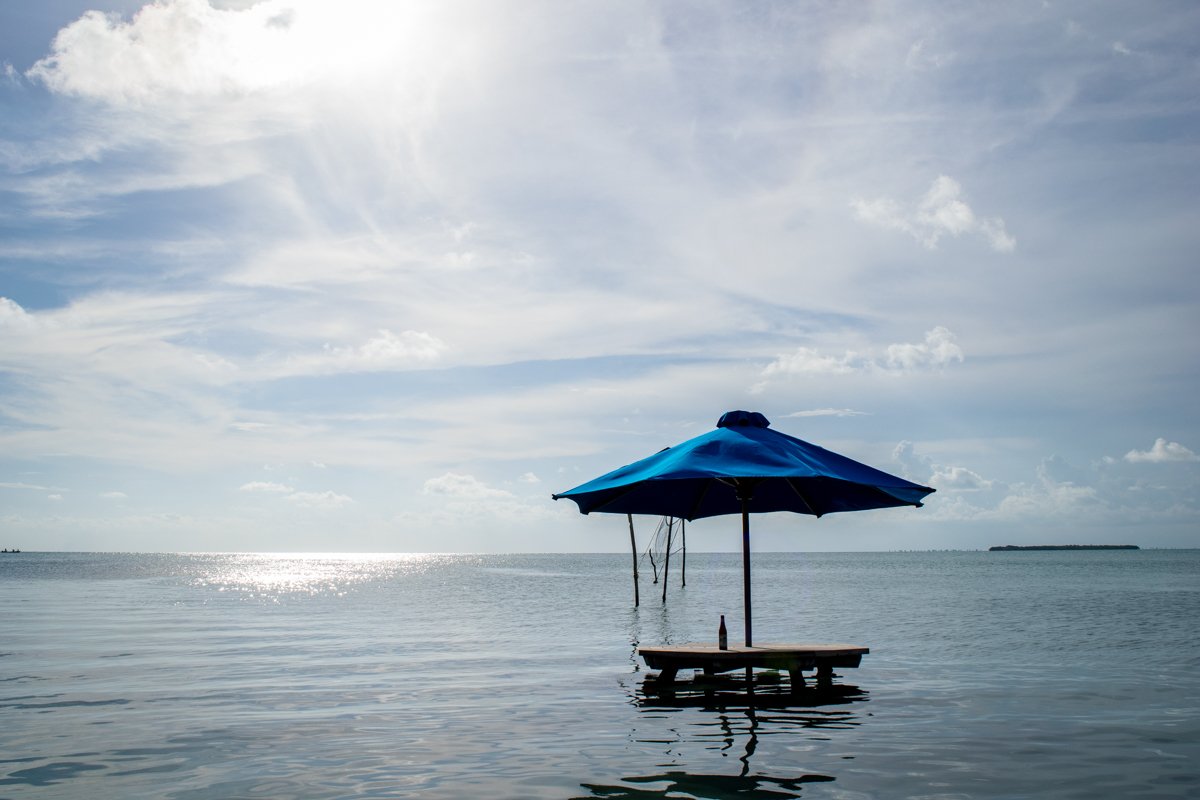 One of my absolute favorite things to do in San Pedro Belize was to head to one of the bars that had docks out on the water and sip a beer while floating in a tube.

San Pedro is the first place I’d ever been where I could sit in a bar and also be in the ocean and also sip and ice-cold beer. Like a swim-up bar at a fancy hotel, but so much cheaper and so much better.

My personal favorites were Palapa Bar and Losers Bar and Grill.

Both have floating tubes in the water where you can take your beers and soak up some sunshine. There are also lounge chairs in the sun and bar stools in the shade for those that want to eat under a fan.

The food at both spots is your average bar and grill style food. It’s a bit expensive, but the quality of the seafood and the burgers was high at both. The Belikins were always ice cold at both as well. 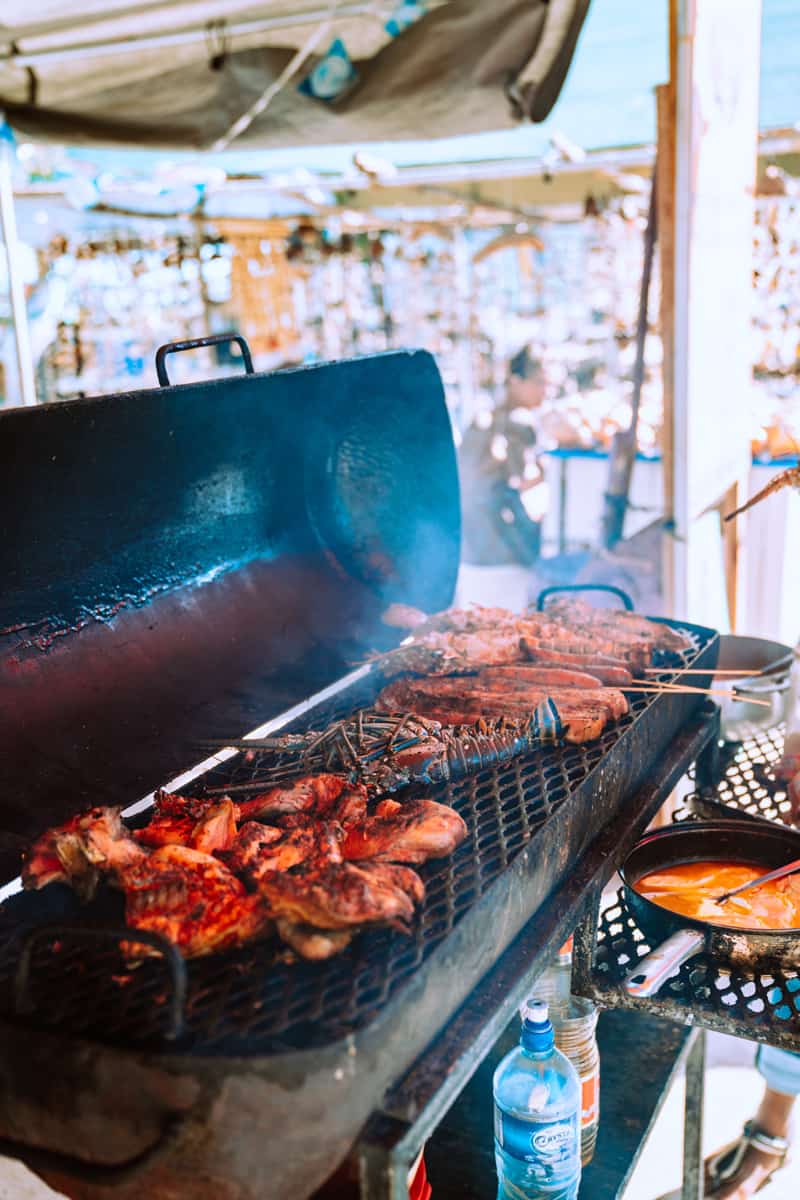 You will never eat anything quite like a fry jack.

A fry jack is a very popular breakfast food around Belize and particularly on the islands of Ambergris Caye and Caye Caulker.

It’s basically a piece of fried dough that is stuffed with all manner of things. My personal favorite fry jacks were filled with eggs, refried beans, and bacon. Other good options are egg and cheese, beans and cheese, or bacon egg and cheese.

There are two fantastic places right on the main street in San Pedro where you can head for this heavy breakfast option.

The first is Izzy’s Smoothies and Juice Bar. They make delicious fresh juice to wash down the fry jack and are one of the more affordable places to grab breakfast. There’s nowhere to sit though, so you’ll have to take it to go.

The second place is quite famous on the island and requires you to get up as early as the locals (she runs out before 9am!). That is at Ruby’s Deli. Ruby makes tons of local specialties including fry jacks and johnnycakes all stuffed with eggs, bacon, and cheese.

If you’re looking for fun, family-friendly things to do in San Pedro Belize, this is one of the best options.

The iguana sanctuary is called the Iguana Eco Corner and is home to just over 200 green iguanas and black spiny-tailed iguanas that live peacefully in the mangroves.

It’s located right in the center of San Pedro, so you can most likely walk there from your hotel or Airbnb.

9. Fly Over the Great Blue Hole

To get a true understanding of how enormous the Great Blue Hole is, you need to fly over it.

Luckily, flights leave from the San Pedro airport almost every day taking tourists over to this incredible natural wonder.

It’s one of the most popular things to do in San Pedro Belize, so be sure to book a few days in advance and more if you are visiting during peak season (Nov-Feb).

You can book through the Maya Island Air website and search for the dates that you’ll be visiting San Pedro. You can even reserve a seat as the copilot!

To get a window-seat, you can expect to pay about $200 USD for the trip. 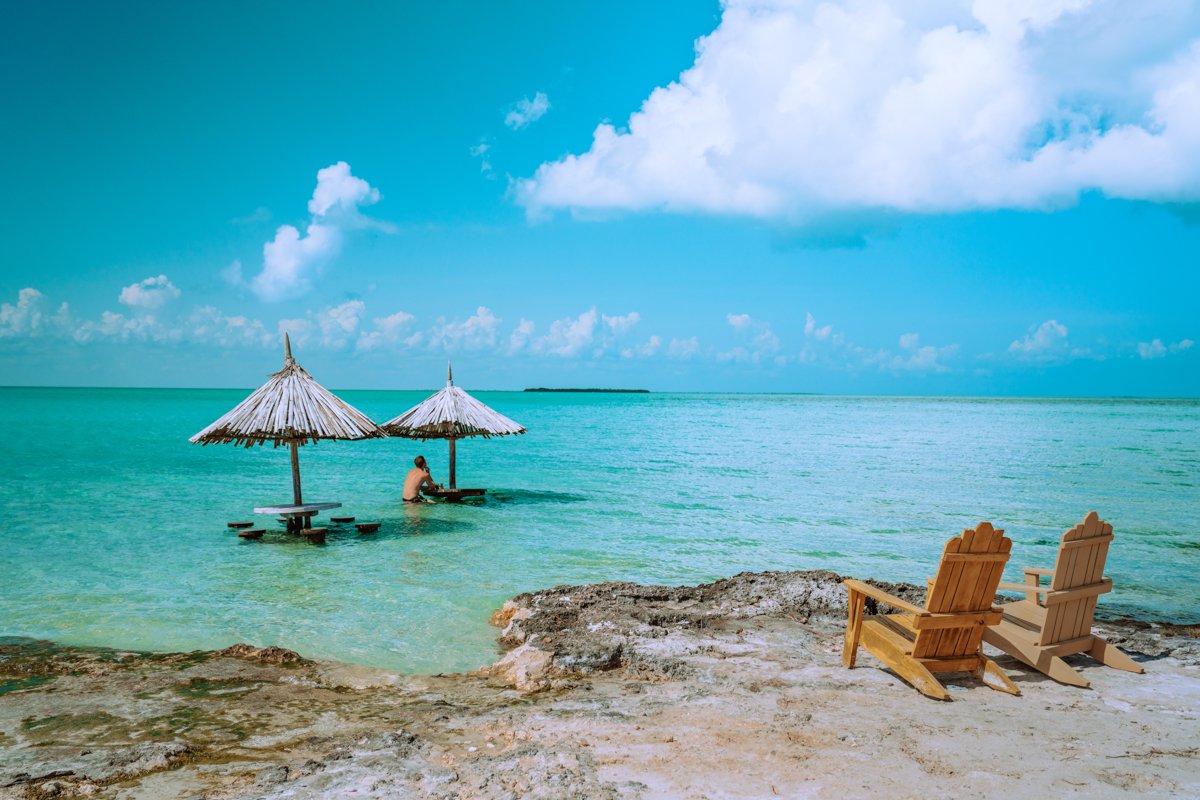 The chicken drop is a little, well, controversial.

I realized after seeing this that it’s a pretty popular thing in many island towns around the world, but this was the first and only time I’ve ever seen it happen.

Everyone on the island recommended that we check it out. They even insisted that it was a must-do while we were visiting. We had absolutely no idea what it was until it started.

Basically, you head to Wahoo’s Lounge, a bar on the beach in the center of town around 7 or 8pm.

You then buy a few tickets. The tickets are totally random and each has a number on them like a normal raffle ticket as well as a handwritten number on the back.

When the chicken drop begins after they’ve let everyone have a few drinks from the bar, they bring a chicken out from somewhere in the back. A live chicken.

They let someone from the crowd blow on the chicken’s butt, then they drop him on a large area where there are tons of different squares, each with a number on them.

They then need to read your exact raffle ticket number. If they do, you win the pot – it’s about $100-$200 Belize Dollars if I remember correctly.

You can see my snorkeling trip as well as the chicken drop below in this video.