Tourist attractions in Spain encompass unique churches, ornate palaces, and rugged national parks. When deciding on where to go in Spain, you’re in for a treat!

But whittling down the top Spain tourist spots requires careful thought. This huge country in Europe’s Iberian Peninsula is almost the same size as Texas. Each city is awash with one-of-kind landmarks while the countryside is divided into 16 national parks and 5,000 miles worth of coastline.

Spain is a hop, skip, and a jump from neighboring European cities but if you’re flying in from further afield, you will need to get strategic with your itinerary. Here is a guide to beautiful and famous places in Spain to pin to your wishlist.

The following places to visit in Spain are divided into urban landmarks, national parks, and beach regions. For each one, we’ve linked to the Google location and the official website where you can find more detailed information and purchase advance tickets.

Touring historic Spain tourist attractions and landmarks is one of the best ways to connect with the nation’s history and cultural identity. 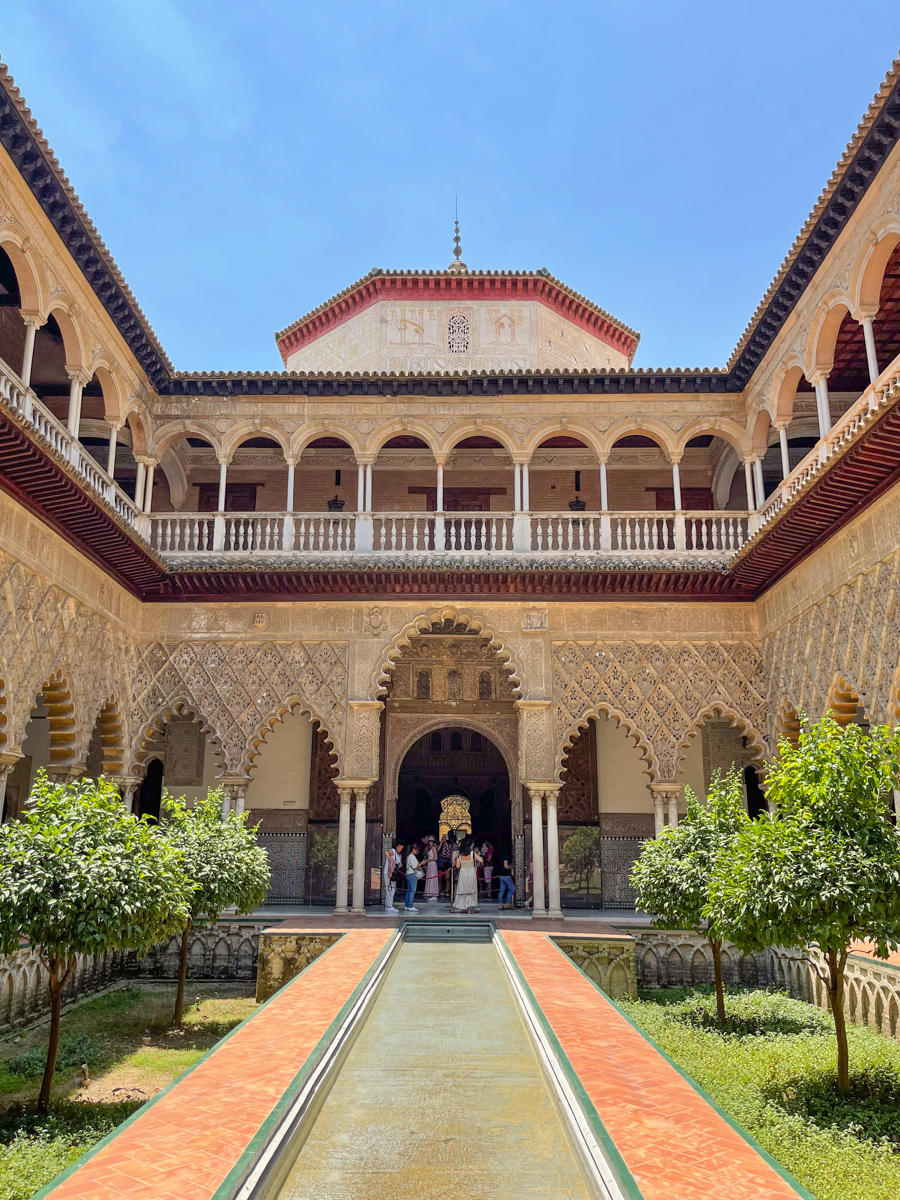 One of the integral Spain tourist spots, the Royal Alcázar of Seville was declared a World Heritage Site in 1987.

“Alcázar” comes from the Arabic word for fort or castle. Fusing elements of Romanesque, Gothic, and Renaissance architecture, the alcázar is an example of Mudejar construction. It was built for King Peter of Castile during the 14th century atop a Moorish royal palace.

The palace is lavishly appointed with Islamic-style tilework and set within landscaped gardens with water features and sculptures.

General admission starts at €14.50. Avoid the lines and purchase your skip-the-line ticket online in advance. This permits entry to the palace and gardens as well as the Bellver Museum, Antiquarivm, Triana Ceramic Museum, and San Jorge Museum. 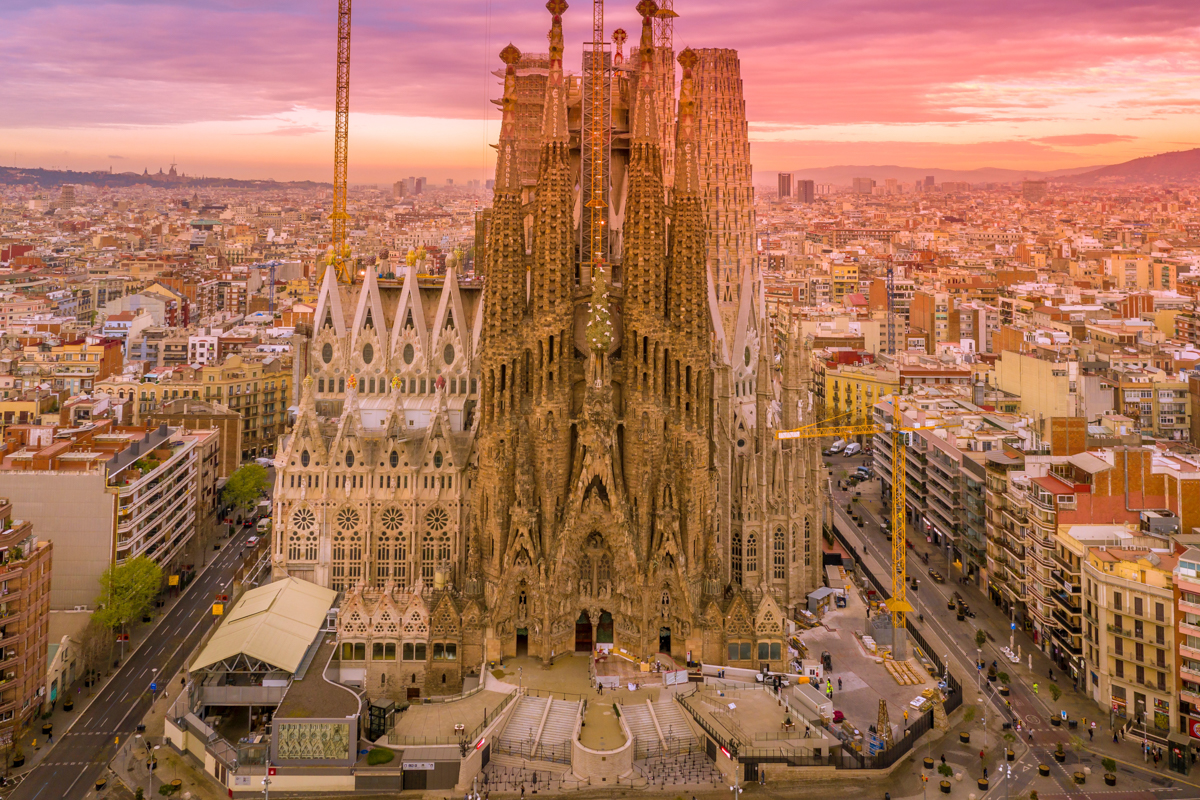 Despite still undergoing construction, La Sagrada Família is, without a doubt, one of the most visited places in Spain. Officially the Basílica i Temple Expiatori de la Sagrada Família, the temple is the work of Antoni Gaudí – the influential and radical architect whose designs flood the city of Barcelona.

Gaudí took over from the original architect and commenced work on his masterpiece in 1883. Recreating the life of Jesus Christ, La Sagrada Família marries elements of Art Nouveau, Catalan Modernism, and late Gothic.

The Catalan architect worked on the project until his death in 1926 when it was passed to his disciple. At the time of writing, efforts concentrate on the towers of the Evangelists Luke and Mark and the tower of Jesus Christ.

La Sagrada Família is the star of Barcelona and booking tickets in advance is highly recommended. General admission with an audio guide starts at €26 but you can upgrade to include a tower visit or guided tour service.

If La Sagrada Família blows your mind (spoiler: it will), remember to check out more of Gaudí’s legacy while in Barcelona. Park Güel, Casa Milá, and Casa Batlló are worthy additions to your Barcelona itinerary. 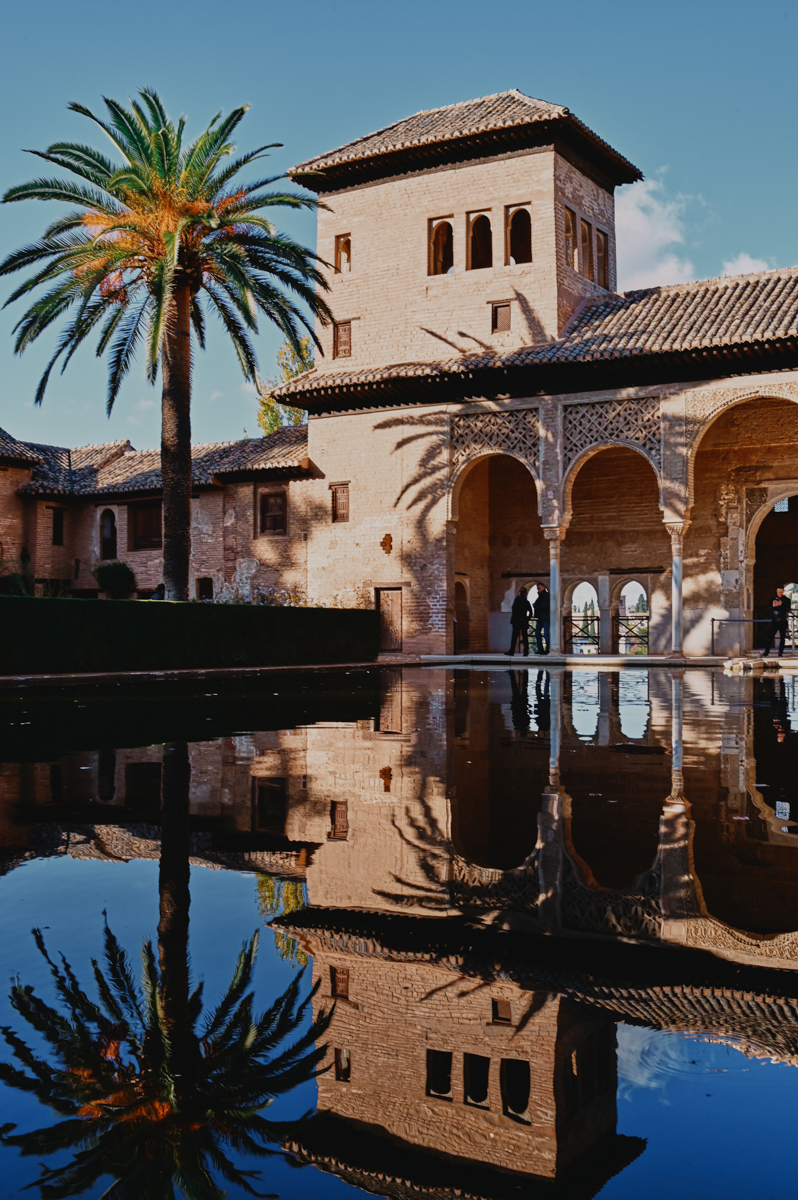 Nestled at the foot of the Sierra Nevada National Park, Granada is an attractive city known for its Moorish architecture. There are so many things to do in Granada, but there is one thing in particular that you can’t miss.

Looming above the streets, the hilltop Alhambra is the pride and glory.

This was once the largest political and aristocratic center of the Nasrid Kingdom in the Iberian Peninsula. Constructed during the 13th and 14th centuries, the compound comprises a core citadel, palatial towers, cloistered courtyards, and the Generalife gardens.

The Alhambra was added to the World Heritage List in 1984, owing to its expression of Moorish and Andalusian culture. It remains one of the top Spain tourist places to encounter Islamic art and architecture. And, to be honest, it’s worth visiting alone for the panoramic views.

Tickets to explore the site in its entirety cost €14 and you can book these online in advance. 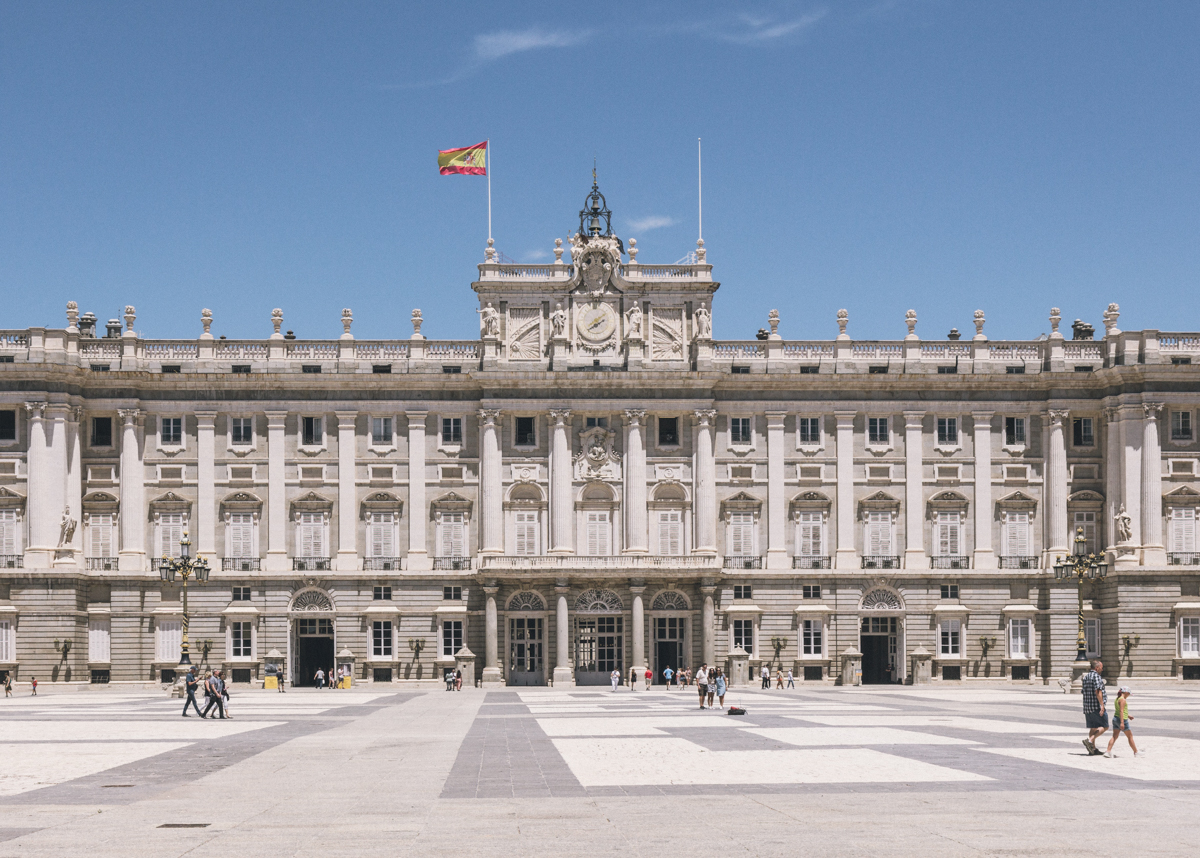 As the nation’s capital, Madrid is one of the most visited places in Spain. Fortunately, you have a huge array of sights to see whether you plan a two day or three day Madrid itinerary.

But, let’s start with the Royal Palace of Madrid (Palacio Real de Madrid). This imposing residence was built during the 18th century and contains 3,418 rooms. It was conceived as digs for the Spanish royal family and, technically, remains the official residence. However, it’s only used for state events these days and is open to the public at all other times.

Plush rooms are appointed with priceless antiques and masterpieces from the likes of Caravaggio and Velázquez. Outdoors, you can ogle the facade from the Plaza de la Armería under the Madridian sun.

Admission is €13 plus €4/5 for an audio guide. As always, do consider advance purchase to avoid long lines or being turned away.

The ​​Mosque-Cathedral of Córdoba (Mezquita-Catedral de Córdoba) occupies a location that spent centuries passing hands between Muslims and Christians. Córdoba was in fact the first city that the Moors conquered when they arrived in Spain in the 8th century.

A prayer hall supported by 856 columns crafted from jasper, onyx, marble, granite, and porphyry is the highlight of the mosque. These materials were excavated from the site of a Roman temple that previously stood in this location.

When Córdoba reverted to Christian rule, the mezquita was established as a Roman Catholic place of worship and a Gothic-Renaissance nave was added. For this reason, the Mosque-Cathedral is one of the most fascinating tourist attractions in Spain for history and architecture enthusiasts.

Admission is €11 plus €3 if you want to climb the bell tower. 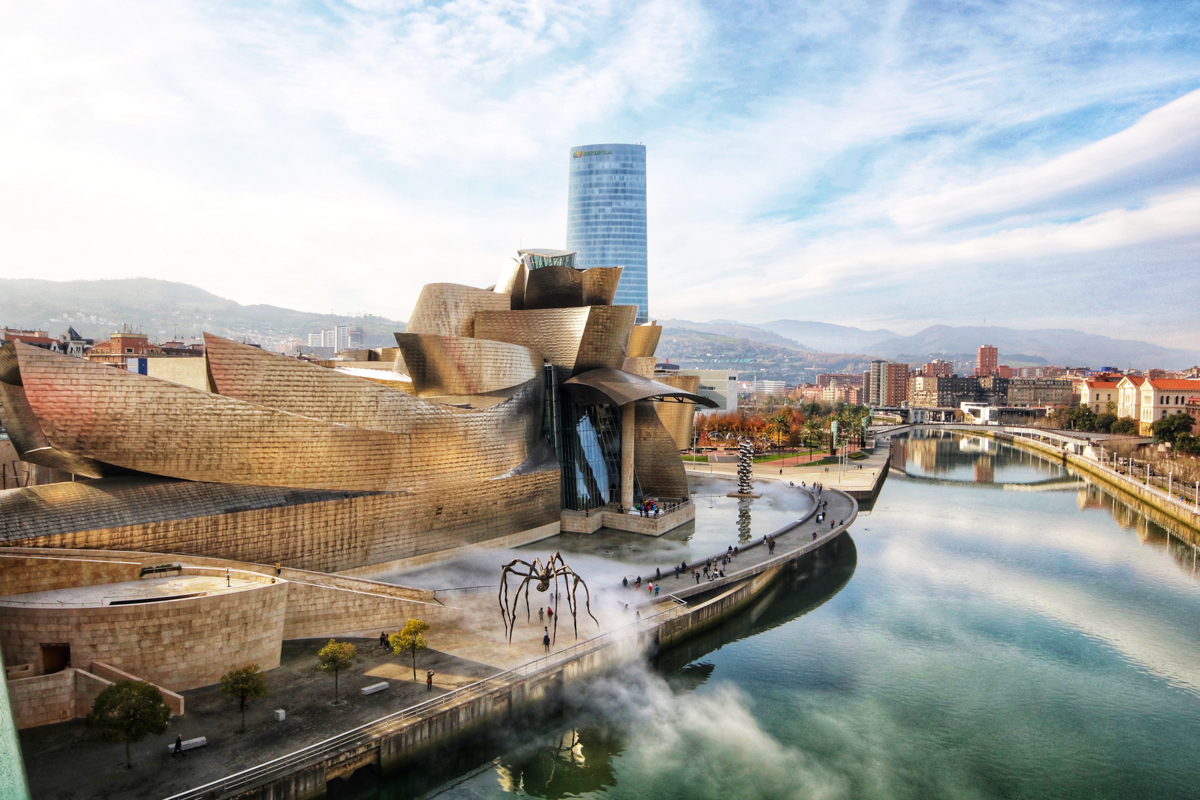 Bilbao’s Guggenheim Museum is one of the ultimate tourist attractions in Spain for art lovers.

Even if that’s not the case, the building alone is worth a gander. Prominent Canadian-American architect Frank Gehry designed the museum. Picasso’s Accordionist (1911) inspired the modernist structure and features a facade composed of titanium.

The museum sits on the banks of the Nervión River and exhibits contemporary paintings, sculptures, and installations from the likes of Vasily Kandinsky, Mark Rothko, and Eduardo Chillida.

Opened to the public since 1997, the gallery is a beacon of Spanish and European visual arts.

Admission to the Guggenheim Museum is €16 and includes an audio guide.

The White Villages of Andalucia (Pueblos Blancos) are a sequence of whitewashed communities on the periphery of the Sierra de Grazalema Natural Park (Parque Natural Sierra de Grazalema). These gleaming settlements leap out of the landscape of this verdant area of forest and mountains.

With buildings carved into the cliffs, Setenil de las Bodegas is one of the most visually striking. Definitely factor in time to stroll around the center for a closer look and sip a coffee beneath the rocks. On the other hand, ​​Olvera stands out with an elevated church from which you’ll savor sweeping valley views and Zahara de la Sierra overlooks a reservoir.

The White Villages are one of the famous places in Spain where you’ll benefit from having your own car to get around. Check car rental prices on Rentalcars.com here. You can follow the Ruta de los Pueblos Blancos and stop at the villages that take your fancy.

Besides the iconic tourist attractions in Spain, the country is home to 16 national parks and countless natural parks. If hiking, camping, and immersing yourself in nature floats your boat then you’re going to love ticking these off your list.

Monfragüe National Park is one of the best tourist destinations in Spain for wildlife. Vultures, eagles, falcons, owls, and black storks are just a sample of what you might see if you tilt your neck. On the ground of this protected biosphere dwell herds of deer as well as the rare Iberian lynx.

Salto Del Gitano is a prominent viewpoint over the river and cliffs where vultures nest and soar through the sky seeking their next meal. Mirador La Tajadilla is an easily accessible picnic spot with prime birdwatching potential.

Monfragüe National Park is situated in western Spain. The small village, Villarreal de San Carlos, is the gateway to the hiking trails and contains a visitor’s center where you can amass your intel and pick up trail maps. 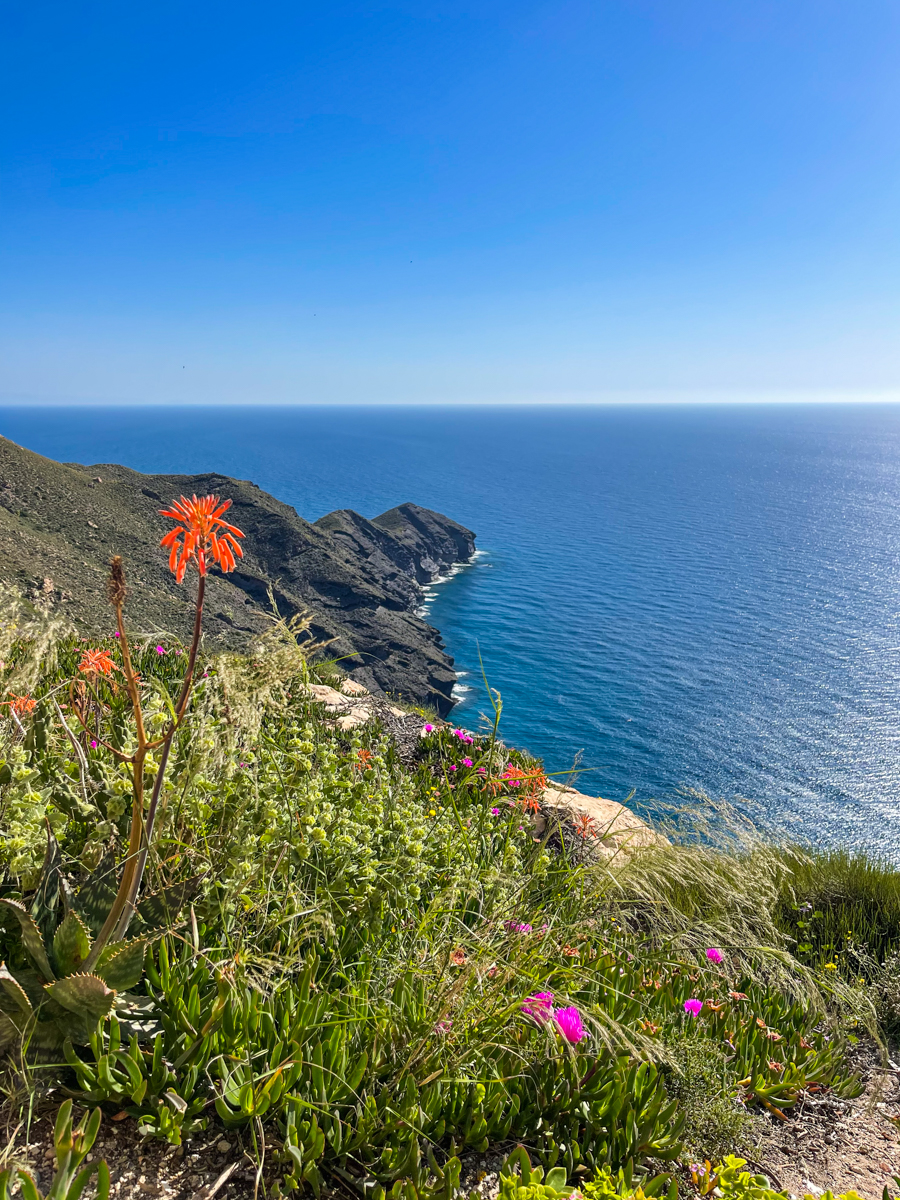 The Cabo de Gata Níjar Natural Park (Parque Natural del Cabo de Gata-Níjar) is one of the prettiest Spain tourist places for untouched nature. This is a great off-the-beaten-track destination for hiking, kayaking, and splashing in the ocean.

Cabo de Gata hugs the cliffs that protrude from southern Spain. The landscape is the result of an extinct volcano and made up of craggy rocks and contrasting hues of rock.

Kayaking tours navigate you along the coast and give you the opportunity to explore the oceanic caves.

Cabo de Gata is a 30-minute drive from Almería.

Spain’s largest national park stretches over 850 sq km from Granada to the valleys of the Alpujarras. The Sierra Nevada National Park contains no less than 20 peaks surpassing 3,000 meters. At 3,478 meters, Mount Mulhacén is mainland Spain’s highest mountain and you can choose to hike to the summit or observe it from lower elevations.

Sierra Nevada is one of the year-round outdoor tourist attractions in Spain. Spring, summer, and autumn is all about hiking, cycling, horseback riding, and birdwatching. Spanish Ibex, wild boar, wildlife, and birds of prey dwell in the national park.

The national park is reachable from Granada and Almería. Alternatively, you can seek accommodation in the park limits at Sierra Nevada or Trevélez.

This southwest European country benefits from glorious beaches that receive a Mediterranean climate. There’s no better place to kick back with a pitcher of sangria and digest all the incredible Spain tourist attractions you’ve witnessed on the mainland. 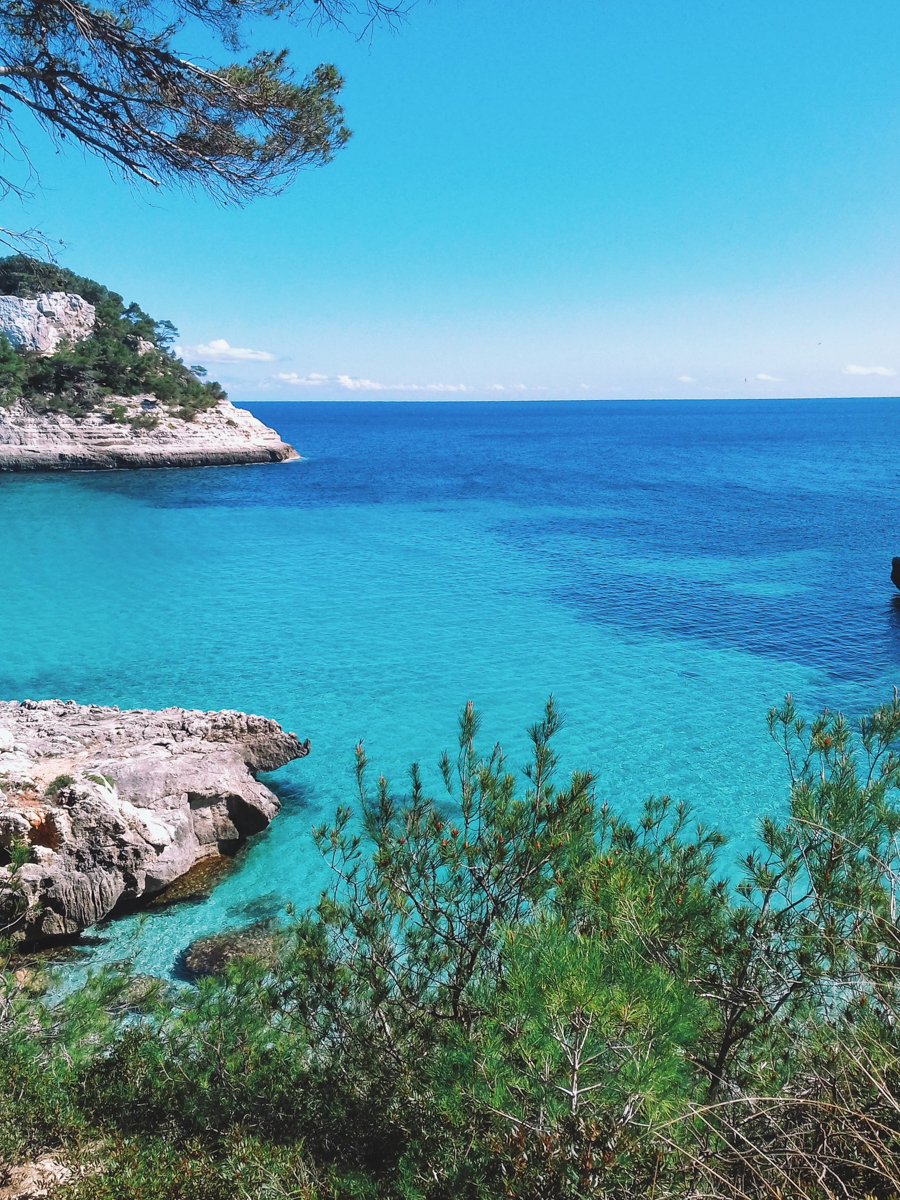 The Balearic Islands are an archipelago off eastern Spain consisting of four main islands and around 150 smaller isles. They enjoy Mediterranean climes and provide landscapes that vary significantly from the mainland.

Menorca is a quieter alternative to Mallorca with secret beaches, a rougher terrain, and a mellow atmosphere.

Ibiza is one of the most famous places in Spain for partying and beaches. Although there are plenty more things to do in Ibiza besides hitting the clubs, including hiking, watersports, and natural parks.

Formentera is an easy day trip from Ibiza but you can also choose to stay on this smaller isle.

The Balearic Islands are reachable via plane or boat. You can pick one or indulge in a spot of island-hopping. 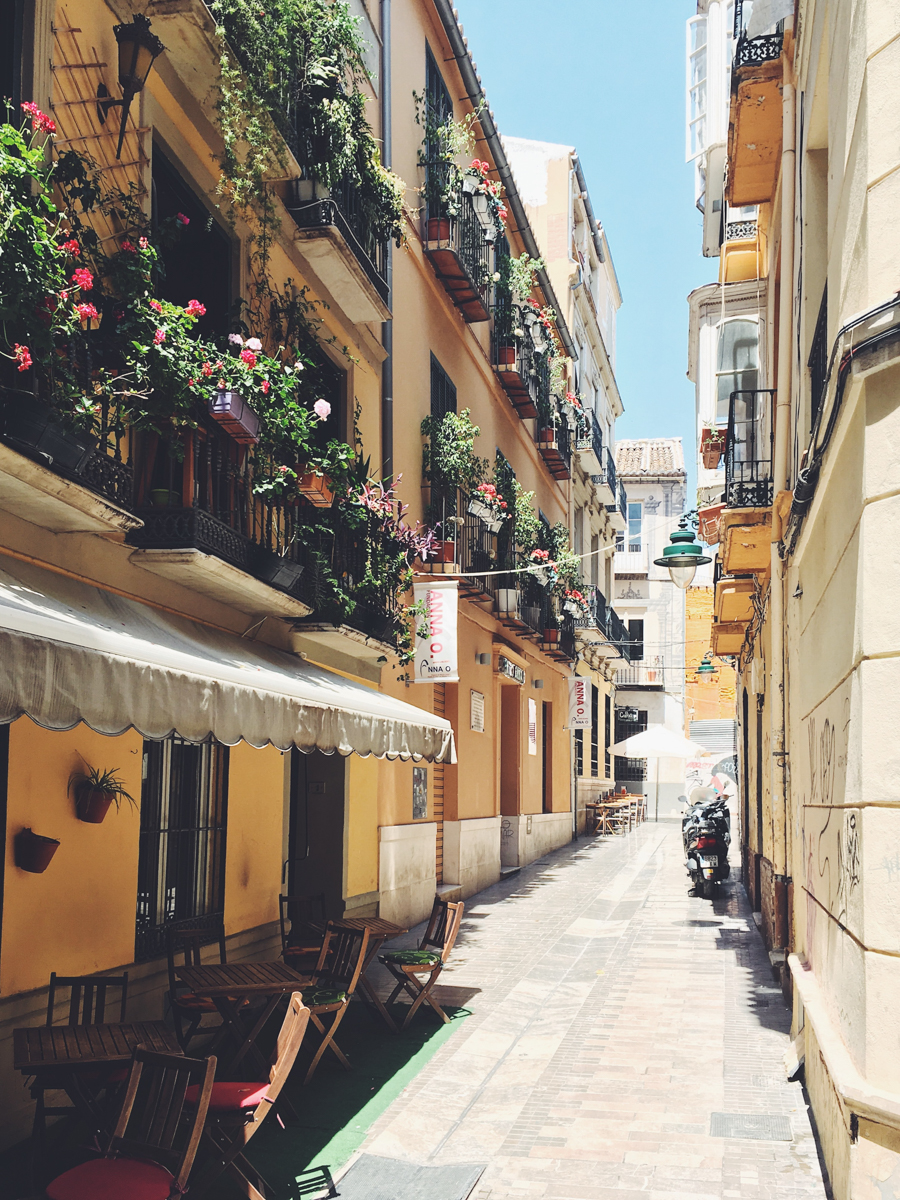 But there’s no need to even leave the mainland to find your favorite Spanish beach.

Located in the autonomous community of Andalusia, Costa del Sol is one of the hottest Spain tourist spots. The seaside region stretches from t in the south to Málaga and consists of a string of teeny towns and fishing villages.

It was named the “Sun Coast” in celebration of the 300+ days of sunshine the strip receives every year.

Sandy beaches provide gentle swimming conditions and are lined with beach bars. Estepona is one of the best places to stay in the Costa del Sol on account of its diversity of natural landscapes and historic attractions in town.

Do bear in mind that the Costa del Sol is exceedingly busy over the peak summer months. Visit outside of July and August for the best conditions.